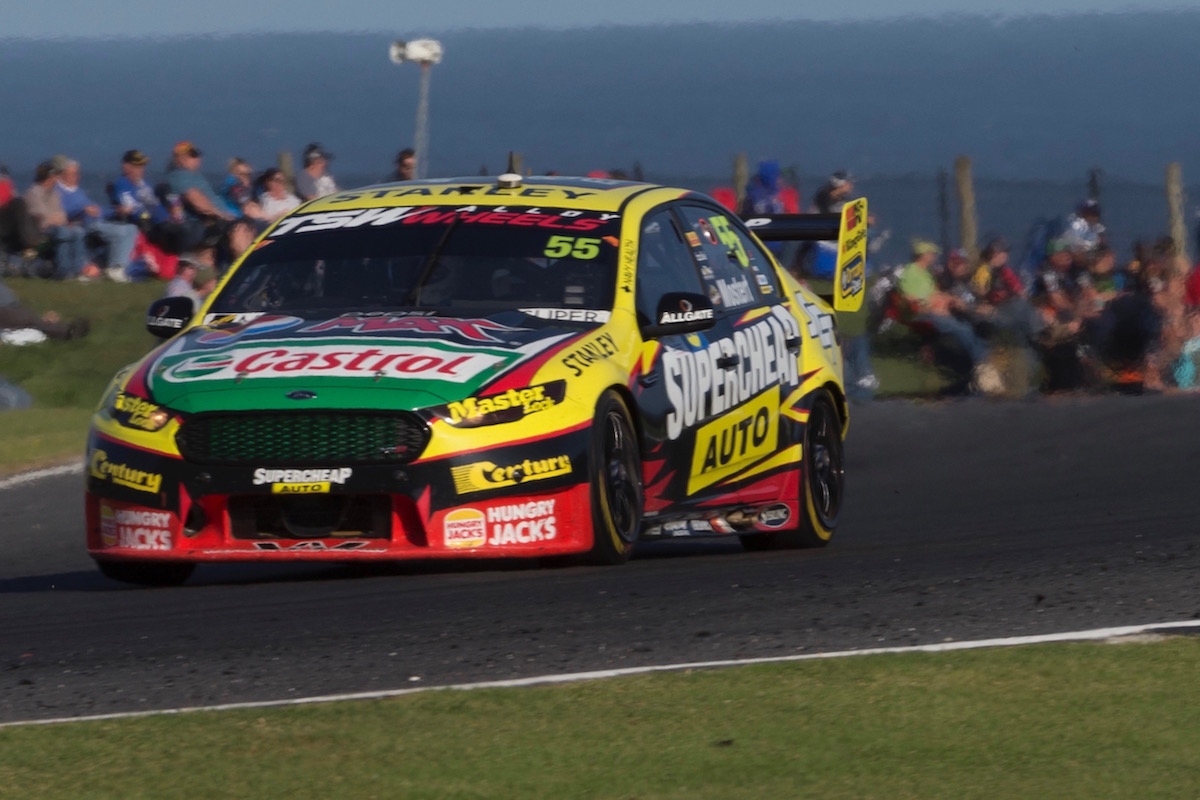 Chaz Mostert is hunting for balance and it’s got nothing to do with the leg he broke in that tumultuous Bathurst accident last October.

Instead, it’s the handling balance of his Supercheap Auto Racing Ford Falcon FG X that has him mystified after two difficult V8 Supercars championship SuperSprints in Tasmania and at Phillip Island.

The issue has him concerned heading to the next championship event at one of his favourite tracks, Barbagallo Raceway in Western Australia, where he made his main game debut with a top 10 finish for Dick Johnson Racing in 2013, won his first race for Ford Performance Racing (now PRA) in 2014 and his first two ARMOR ALL Pole Positons in 2015.

“Perth has always been a good track for our team and our cars,” the 24-year old told v8supercars.com. “We have had good results there.

“But coming out of Phillip Island and Tassie I am not as confident as what I would like to be going there. We will see how we roll out there. We will be working hard back at the workshop for sure.”

While understandably reticent to discuss the specific issues he is having with the FG X, Mostert confirmed the car was behaving very differently to what he remembered back in the second half of 2015 when he was on a hot streak of wins, podiums and pole positions and challenging team-mate Mark Winterbottom for the driver’s championship.

Counting Bathurst where he broke his left leg and wrist and damaged his left knee in that monster Friday shunt, Mostert missed the last five events of the season and eventually dropped to 11th in the championship results. However, he still claimed the ARMOR ALL Pole Award despite missing the last 12 qualifying sessions.

“I am just trying to find my feet at the moment, I am probably not as comfortable with the car this year as I was last year,” he conceded.

“It is something we just have to work out what we have done over the five or six months that I was out of it and just work out how it got to there.

“There is a number of things. There is a bit of missed balance at the moment which is the biggest thing. We used to have the opposite, now we have something totally different. So we have just got to work that out.”

While the championship started promisingly at the Clipsal 500 for Mostert – despite a crash – with two front row starts and a podium, at Symmons Plains he qualified 11-6 and turned that into 10-5 finishes.

He felt the car was better at Phillip Island, but after starting from the front row on Saturday he was robbed of a podium finish when the front right tyre blew on the last lap. On Sunday he qualified only 14th and was spun to dead last on the opening lap, before fighting back to eighth thanks to good race-pace and strategy.

After all that he now runs 16th in the drivers’ championship.

“For me, I raced the car as hard as I could out there,” he said post-Phillip Island. “It was a shame to be turned around on the first lap but definitely this was a stronger round for us than what Tassie was, so I think I’ve just got to find out what’s going on in the car more than anything.

“Those guys who had those last couple of rounds at the end of last year probably have a little bit on me just trying to work out my car.”

Mostert conceded limited testing days and lack of fresh tyres would make it extremely difficult to sort out his issues quickly. It also didn’t help that moving homes to the Rod Nash Racing Racing Entitlements Contract (REC) also meant he had access to former team-mate David Reynolds’ 2015 tyre bank rather than his own allocation left over from last year.

“Even when you are allowed to test you haven’t got any tyres to do anything so it is kind of pointless. I have Dave Reynolds’ tyre bank from last year and it’s even hurting me at rounds because I don’t know exactly where to go with the car at the start of the round.

“So it’s hard and even during your test days you run on old rubber as well.”

The good news in all this is that Mostert is pleased with his recovery from the Bathurst shunt, especially enjoying the warmer weather now that he has relocated back to Queensland.

“The body is mint, so each day it gets better and better,” he said. “Cold weather plays around with ligaments and stuff, so that’s why I Iimp around when I am in Tassie and Melbourne.

“But when I go back to the Gold Coast I don’t even have a limp. So everything in the car feels good – the ergonomics and all that – and nothing is hurting my leg.

“I am just loving being in the race car, so if I could just drive everywhere I’d do that.”