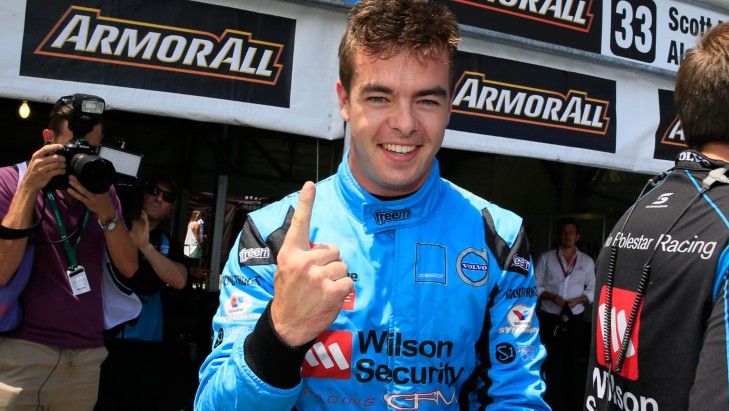 Scott McLaughlin may be suffering a bad cold but says ARMOR ALL Pole Position is a better boost than Panadol.

The Volvo ace is finding it difficult in the car, but is eager to fight for a good result after early issues cost he and co-driver Alex Premat yesterday.

Premat is the culprit who passed on the cold.

"Alex hasn't been right all week and you're next to each other every signing session, when you each lunch and you eventually pick it up," McLaughlin told v8supercars.com.au.

"I've had a combined eight hours of sleep in the last two days.

"I was crook yesterday but not as bad - today I'm really bad. So that [pole] peps me up, better than Panadol or whatever, so pretty stoked!"

The drama was speaking over the radio in the car.

He confirmed yesterday's problem was a power steering cooler, and while it wasn't caused by Premat pounding the tyre bundles - which broke the front splitter - but admitted it wasn't ideal.

"The boys don't reckon that [caused the problem] but it probably didn't help because it made it a little more exposed.

"It wasn't a much as a barrier there, so if you clip the tyre bundle there could be shards of whatever going in there ... we've had a few of those go this year but they weep, so they don't go completely, they just slowly go down."

Starting from ARMOR ALL Pole Position is one better than yesterday, and while McLaughlin wasn't placing blame from yesterday, he wants to push on and get a result today.

"The car feels really nice but it's just important we keep our head down, bum up and work on it.

"We worked on the car a little bit, changed one spring just to get a little bit of turn out of it, which is good. So moving forward we've got a good idea of where we're going to be."

McLaughlin's 1min10.7628sec lap was just 0.0998sec better than Bathurst winner Craig Lowndes, who will start alongside him on the front row.