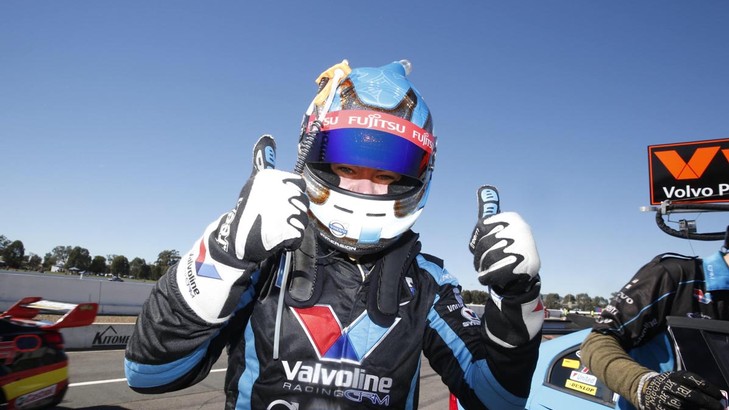 Scott McLaughlin has filled in a significant gap in his CV by claiming ARMOR ALL Pole Position for Race Nine of the 2014 V8 Supercars Championship at the Winton 400.

The pole position is also Volvo’s first in Australian touring car racing since John Bowe’s set fastest time at the Wanneroo, Western Australia, Championship round in 1986. It is also the first for Garry Rogers Motorsport in four years.

“To score pole is massive,” the Volvo S60 driver  told v8supercars.com.au. “I have been trying to do for about four years, in the Dunlop series and here. To do it in the V8 Supercars main game is a special thing.

“But I couldn’t do it without these guys and to get the first pole for Volvo is a special thing.”

McLaughlin is aiming to make up for yesterday’s disappointments in today’s 200km race. He failed to finish Race Seven because of an engine failure and a voltage issue forced him to pit from the lead of Race 8 and drop from contention.

“We are confident (we can finish), we have done the miles … we are learning things and trying things without the benefit of any test days so far. We should be alright but fingers crossed.”

“The track was definitely a lot slower and I was surprised to claim pole position with that time,” McLaughlin admitted. “We had to combat the track because it had changed a lot, so we had to change our set-up quite a bit which was a bit of a guessing game.

“But that’s what makes it so sweet – to make so many changes and come out here and be the fastest.”

Shane van Gisbergen starts alongside McLaughlin on the front row this afternoon, with the 200km race beginning at 3.30pm local time.

Scott McLaughlin  ›
15' Wilson Security Racing GRM ›
2014 Winton 400  ›
Stay In The Know
Sign up to the Virgin Australia Supercars Championship Newsletter
We use cookies to ensure that we give you the best experience on our website. If you continue to use this site we will assume that you are happy with it.Ok