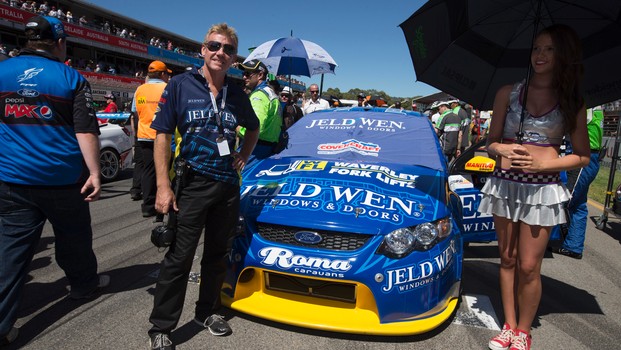 Alex Davison’s prospects of a second year racing for TeamJeld-Wen have been encouraged by team owner Charlie Schwerkolt.

The team, which debuted in 2013, is the fourth V8 Supercarprepared and raced in the Championship under the direction of Ford PerformanceRacing and is underpinned by Schwerkolt’s Racing Entitlements Contract (REC).

Davison, who joined brother Will under the FPR umbrella aftersigning a one-year deal with Schwerkolt, is currently running 15th in the Championshipwith a best finish of fifth in Race 10 at the Chill Perth 360.

Schwerkolt has an option on Davison’s services for 2014 andsays he plans to review that option after Bathurst.

“He has all the ingredients to do it, but obviously he needsto do it. That’s a goal of mine but it’s too early to tell where I need to beand what I will be doing.”

Davison, 33, spent a year out of V8 Supercars in 2012 afterthree promising but ultimately fruitless years with Stone Brothers Racing.

“He knows where he wants to be and what he has to do and Iknow the same thing,” added Schwerkolt. “So I hope he can achieve all that.”

Schwerkolt regained his REC for 2013 from Dick JohnsonRacing after two years, following the high profile breakdown of his personaland business relationship with the Ford legend in 2010.

“This (Team Jeld-Wen) was obviously a couple of years in themaking building it all up again from a messy break-up and starting afresh in awhole new environment as a customer car,” Schwerkolt said.

“I had some realistic goals of being in the 10 at the end ofthe year and that is still my goal and we have to achieve that.”

“There are some elements that really work well for me,” hesaid. “Does the four car model work? Yes it works really well. It is early daysof how it is all fitting in, but the resources of the four car team is justfantastic.

“We did an engine between races one and two in Perth and allthe guys in the team just jumped in and changed the engine so quick it wasfantastic.”

Of course, not all has proceeded smoothly. Among otherthings, Davison has suffered a wheel-nut issue in a Clipsal 500 pit stop and acool suit drama in Texas.

“You keep moving on and just slowly, slowly chopping awayand all that sort of stuff,” Schwerkolt philosophised.

Alex Davison  ›
Stay In The Know
Sign up to the Virgin Australia Supercars Championship Newsletter
This website uses cookies to improve your user experience. By continuing, you will be providing your consent to our use of cookies.Ok