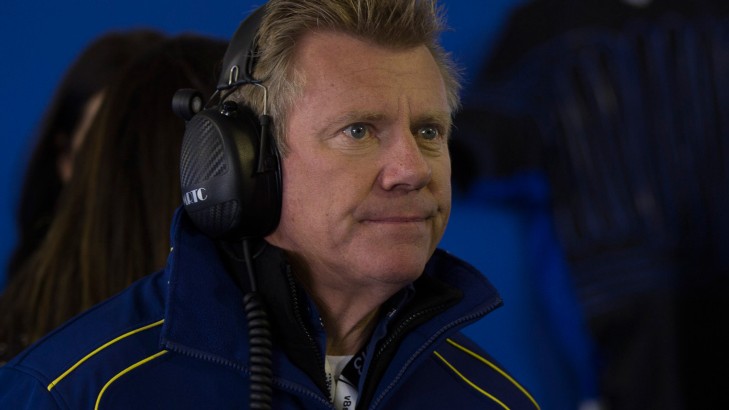 Team Jeld-Wen's front-running Bathurst form has been welcomed by team owner Charlie Schwerkolt, who has confirmed he is almost certainly on the hunt for new naming rights sponsor in 2015.

The uncertainty over how his single car team will be funded beyond this season means Schwerkolt also cannot guarantee driver Jack Perkins a contract renewal into 2015.

Schwerkolt's deal with Ford Performance Racing to run his entry runs until the end of next season.

"Yeah sure, I need help at the moment," Schwerkolt told v8supercars.com.au. "We are most probably changing our naming rights sponsor next year and it's a tough world out there, so this (performance at Bathurst) certainly helps."

Perkins, who replaced Alex Davison in Schwerkolt's car for 2014, has had a difficult season coming to grips with the FPR Ford Falcon FG II. He runs 22nd in the V8 Supercars drivers' championship.

But he came into spectacular form at the Supercheap Auto Bathurst 1000 last week.

Perkins bounced back from co-driver Cam Waters' Thursday crash to qualify in the top 10 and the young duo raced near the front of the field all Sunday.

But a late-race drive-through penalty for an unsafe release - even though Perkins redressed before leaving pitlane - and then a spin after a clash with Fabian Coulthard in the Lockwood Racing Holden Commodore VF, meant #18 crossed the line in only 12th place.

Despite the disappointing finish, Schwerkolt was delighted with the amount of coverage his car gained across the four days of the Bathurst event.

"It's absolutely fantastic, it really is, the air time we got, because the boys were up there the whole time. So it can only help.

"We have the most amazing supporters, my phone hasn't stopped texting. We have a lot of fans and I am here for the sport. So we will just truck on to the Gold Coast 600 and hopefully the boys just keep charging there and we will see what we can do."

On Perkins' future, he added: "No idea, I haven't even thought about that at the moment. It's hard I am looking at all my options.

"It would be absolutely fantastic if he can do it again," said Schwerkolt. "These FPR cars aren't exactly the easiest to drive. There is a little sweet spot there and Jack got it at Bathurst.

"Maybe it is Bathurst. I don't know what it is, but he got it and he was on it. He was a top five car the whole time... I really hope it continues on to the Gold Coast 600. I think it can and I hope it does."

A shareholder in Dick Johnson Racing between 2008 and 2010, Schwerkolt said the Bathurst weekend was his best experience in V8 Supercars since his return to the category.

"It was a potential top five or even podium," he said. "With 25 laps to go we were in fifth. The whole day the boys were in contention.

"It was amazing, the car looked good, the boys did well, the car was getting better all the time.

"It's the best race for a couple of years for me. It's the best weekend I have had, it's been fabulous. There are so many positives to take out of it.

"We were just robbed at the end. I am a bit dirty about that."