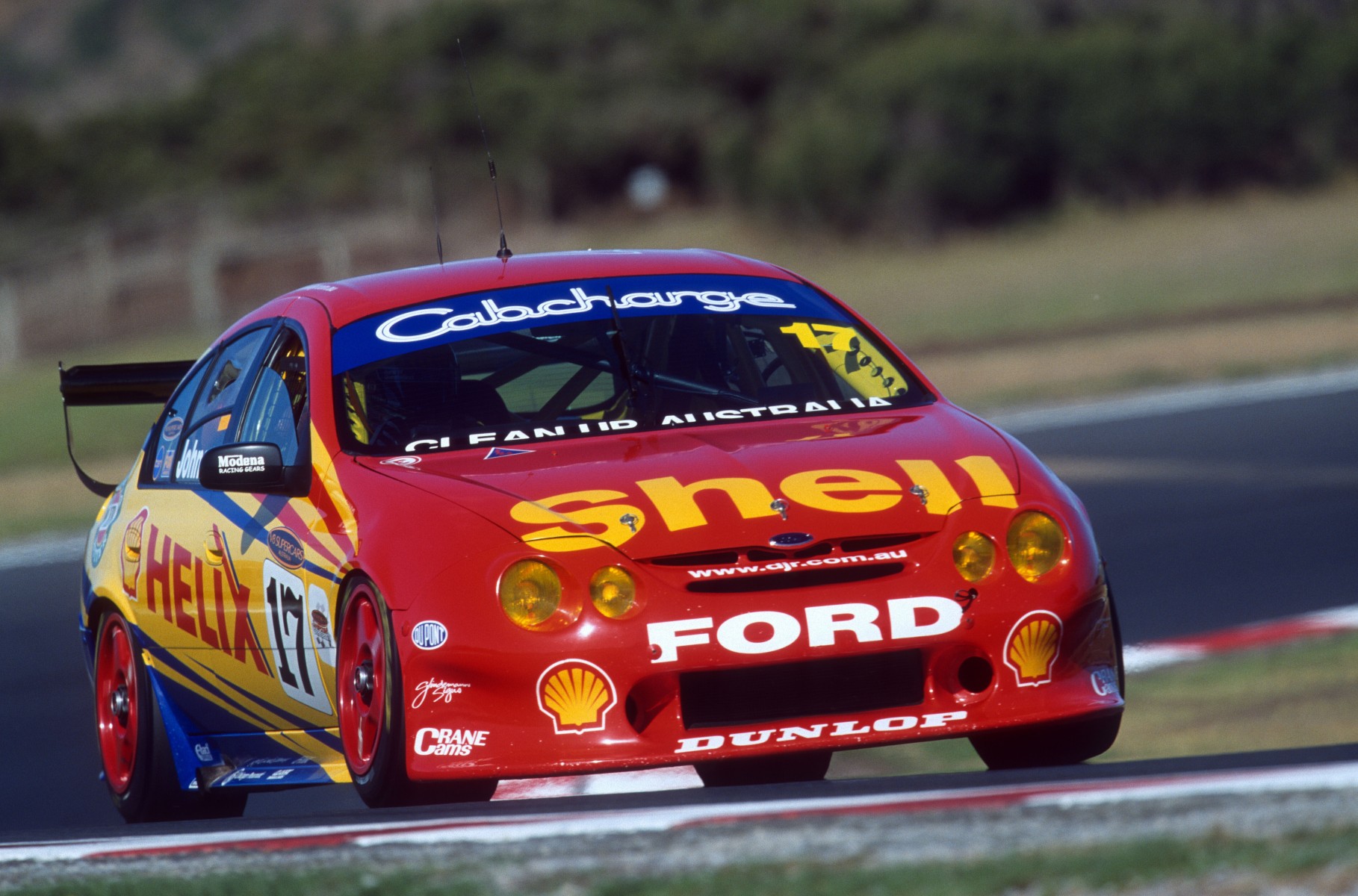 ‘Queensland Loves A Ford!’ – that’s the advertising line that was emblazoned on the side of Dick Johnson’s famous Tru-Blu Falcon back in the 1980s.

Queensland’s favorite son brought more than his share of glory to the blue oval in the sunshine state and DJR Team Penske fans will be hoping for more of the same when the Virgin Australia Supercars Championship heads north to Queensland Raceway next weekend for the Coates Hire Ipswich SuperSprint.

The circuit is the scene of one of Johnson’s team’s most controversial victories.

In the third running of the Queensland 500 back in 2001, team drivers Steven Johnson and Paul Radisich piloted their AU Falcon to an unlikely victory.

Unlikely because they were debuting an untried brand-new car; but even more unlikely as they took the chequered flag bogged up to their axles in the turn one sand trap!

That year’s race was a hotly contested affair with Larry Perkins/Russell Ingall emerging as Holden’s main challenge as the day progressed and they went head-to-head with Johnson and Radisich’s Ford.

Four laps from home the heavens opened in an almighty Queensland tropical storm.

As the rain began to fall leader Ingall ran wide allowing Radisich to make ground and take the lead. Pitting for wets the two cars emerged from pit-lane still with Radisich in the lead.

Two laps later Radisich lost the car in the now torrential rain and found himself beached, allowing Ingall to re-take the lead and continue on until the race was red-flagged not long after.

Holden fans – and indeed the Castrol Perkins team itself – instantly celebrated victory, though quickly they remembered the rulebook. Under the rules, when a race is red-flagged the results are declared at the end of the last fully completed lap, and that handed the win to Radisich, even though he was buried in the turn one sand trap!

Having lost Bathurst in 1992 in similar circumstances in a wet, ‘results declared due to a red flag’ finish, this controversial win was even sweeter for DJR. 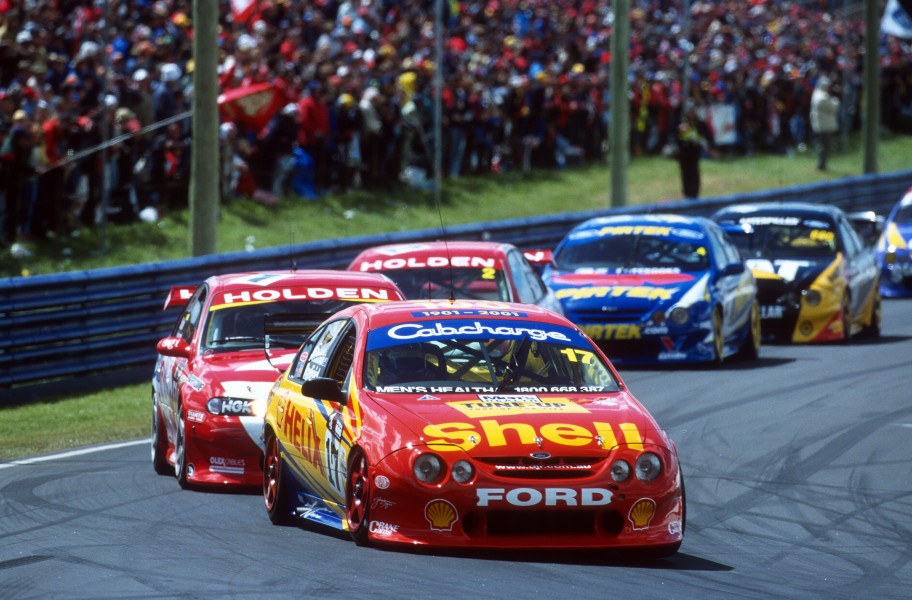 Designated DJR AU13, this AU Falcon was built by Dick Johnson Racing in 2001 and had its spectacular debut win in that year’s Queensland 500.

Johnson and Radisich were again paired in the car for Bathurst, qualifying sixth before retiring with engine failure with 63 laps completed.

In fact, it was during the team bus trip down to Bathurst that the team nicknamed the car ‘Delilah’ during an apparently quite lusty karaoke session!

Johnson drove the car for the remainder of the 2001 season, except for Pukekohe in New Zealand where long logistical lead times sending cars by sea meant an older chassis was sent in its place.

He also retained the car for the entire 2002 season, though this was one that proved to be a real struggle for the entire team as it went from winning races the year prior to qualifying near the rear of the grid. 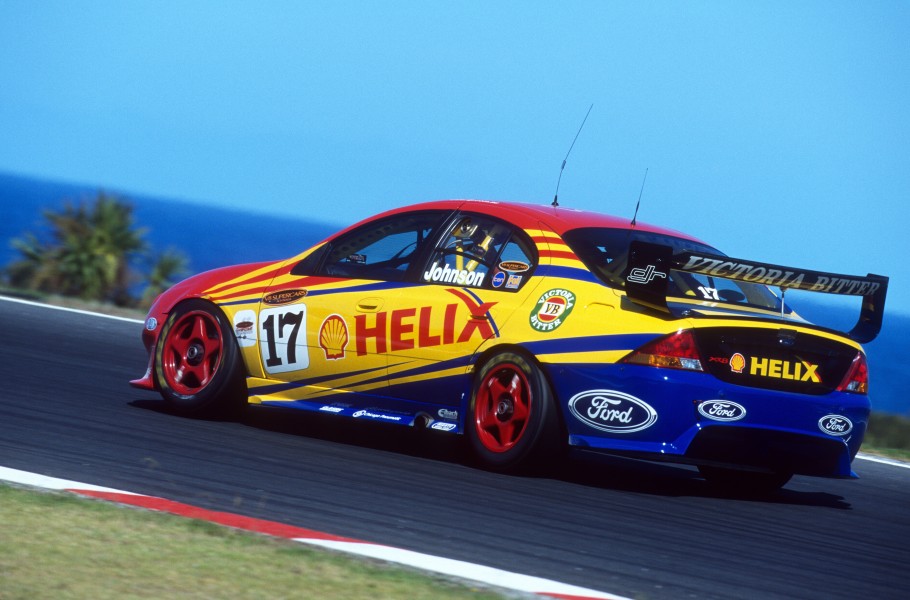 Radisich joined him for the endurance races in the car, finishing 13th in the Queensland 500 and again failing to finish at Bathurst when suspension failure coming off Skyline pitching Radisich into the wall and out of the race.

For the 2003 season the team updated to the new BA model Falcon and DJR AU13 was relegated to display duty in Dick Johnson’s museum at the race workshop.

With the team under mounting financial pressure a few years later, ‘Delilah’ was sold in 2006 along with other significant cars in the Dick Johnson Racing collection, including the Tru-Blu XD Falcon, Greens Tuf XE Falcon, Group A Mustang, Shell Sierra RS500 and Shell EB Falcon.

Prolific Australian touring car collector David Bowden was the purchaser, with the cars still rotated through the display area at the DJR workshop in Queensland.

DJR AU13 remained in the museum at DJR for the next nine years, though in 2015 it was sold to Melbourne collector and racer Chris Stillwell who retains the Queensland 500-winning chassis to this very day.

He intends to get it back out onto the track next year to turn some laps with the Australian 5-Litre Touring Car Association, a group set up to celebrate the early era of V8 Supercars of Falcons and Commodores covering the 1993 to 2002 period prior to the introduction of Project Blueprint regulations.

Saturday Sleuthing will take a break next week for the Coates Hire Ipswich SuperSprint, we’ll return on July 30 with a story that plenty of Holden Racing Team fans will enjoy.