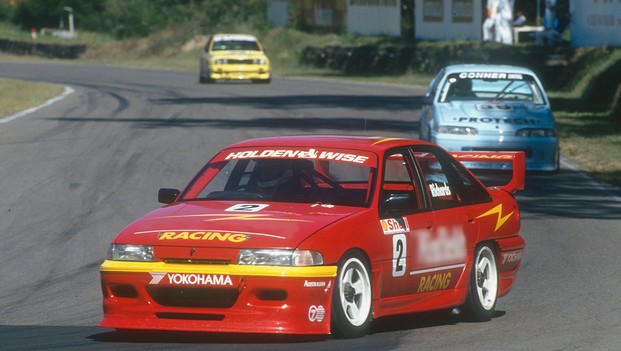 As Car of the Future has helped kick the V8 Supercars Championship into a new era in 2013, today on Saturday Sleuthing we rewind back to when the five-litre formula started in 1993 – and we’ve located one of the original cars from two decades ago.

It’s appropriate timing too that we focus on the original Gibson Motorsport Commodore given Fred himself has re-launched Gibson Motorsport in Hallam, Melbourne, and is looking after a range of ex-Nissan Motorsport race cars for their current owners that compete in the growing Heritage Touring Car category for Group A and C racecars.

The first winged Commodores and Falcons look simple by today’s modern V8 Supercar standards, but at the time they were the latest and greatest of Aussie touring car machinery.

After running the factory Nissan team since the mid 1980s, Fred Gibson was forced to swap the high-tech GT-R two-door racers for a pair of Commodores in 1993 – and that meant a complete change of inventory in the space of only a matter of months.

His Dandenong (Melbourne) based team basically built their first two Winfield Commodores (VP models) as ‘kit’ cars, using Dencar bodyshells (the company that prepared them for the Holden Racing Team for many seasons and also for numerous privateers) and parts sourced from HRT, Harrop Engineering, Perkins Engineering and Holden Motor Sport.

It completed its first car – GMS 001 – in time for the Triple Challenge event at Eastern Creek with Richards giving the car its debut as #2.

The Bathurst legend then drove the car for the 1993 Australian Touring Car Championship, claiming victory in the final two rounds at Barbagallo in Perth and Oran Park in Sydney and seeing Richards finish the top Holden driver in the points in fourth overall.

The Winfield team didn’t compete at the Sandown 500 (having also missed the race in 1991 and 1992 to focus on private pre-Bathurst testing) before this car ran as the #2 car at Bathurst driven by David Brabham and the late Swede, Anders Olofsson.

The duo finished fourth overall and Brabham secured the Rookie of the Year award in his first appearance in The Great Race.

Richards stepped back into it for the end-of-season Australian Grand Prix event in Adelaide, claiming a third and a second place to round out the first year of Commodore competition for Gibson Motorsport.

He retained the car for the start of the 1994 season, though carrying the #6 as Skaife used #2 after losing the Championship #1 to 1993 champion Glenn Seton.

But Richards would only have one event in the at the Triple Challenge at Eastern Creek before the car’s season came to an abrupt end.

‘Gentleman Jim’ suffered a range of punctures with the car’s Yokohama tyres over the event, though the final one in Race 3 finished off his weekend – it sent him off the road at turn one and hard into the concrete in similar fashion to the accident teammate Mark Skaife would suffer 12 months later.

While a new car was debuted for Skaife and Richards took over Skaife’s previous car, this chassis was repaired and sold to privateer Scotty Taylor.

Many will remember the car running with sponsorship from The Xerox Shop and the car’s origins were very easy to spot when it returned to racing at the Bathurst 1000 in 1995 with Taylor, Stephen Bell and Roger Hurd driving. It still ran in the same Winfield base red, though with yellow stripes rather than white.

The car would have a long life in the hands of Taylor and his team with Bill Attard replacing Hurd for Bathurst in 1996 (and also preparing the car) and it then ran in the 1997 ARDC AMSCAR Series as well before another attempt at Bathurst.

It was updated to VS specification and ran at Bathurst in both 1998 and 1999 and then found a home competing in the Dunlop Series (then known as Konica V8 Lites) in 2000 with Attard and Hurd sharing duties before again running at Bathurst.

Attard and Hurd ran the car in the 2001 DVS (including Hurd rolling it in practice at Lakeside!) and the duo were due to team up for Bathurst, though the car was not fast enough to qualify and instead was offered the consolation of a spot on the grid for the Saturday afternoon, non-Championship DVS 30-lapper. So the car missed out on its eighth Bathurst 1000 appearance, though seven starts is a pretty decent record!

It was then sold to Stephen Voight a year later and ended up being sold to its current owner – a Perth motorsport enthusiast whose identity we’ll keep quiet – in 2010. He takes up the story…

“I also have the Gemspares Group A Commodore shell and prior to knowing its history was trying to make a HRT replica car out of it and was chasing four ex-HRT wheels for it,” he told the V8 Sleuth this week.

“I found some with Terry Ashwood, who purchased Fred Gibson’s collection of Nissan cars, but he wouldn’t sell them to me unless I also bought all of the VP panels he had for Winfield/Gibson Commodores, which were left over after they had been upgraded to VRs.

“He wasn’t interested in the Commodore stuff so I got a bonnet, proper front bar, boot, rear bar, sideskirts, front guards and all sorts of VP bits and pieces. Terry had got it all when he bought the Nissan stuff. I decided I was going to buy a VN Saloon Car and put the Winfield panels on it and have some fun, but somehow I ended up buying the real thing along the way!

“It’s still in VR/VS guise and in Winfield livery. It never raced with Gibsons as a VR but I’ll leave it as it is for the moment. I’m pretty fortunate given a lot of VPs were converted to VR and the whole rear parcel shelf got changed. Some of them had a little hinge adaptor so the parcel shelf stayed the same and they cut a very small hole and put a cover on it. So mine is an original VP parcel shelf so it doesn’t need to be changed back.

“I was attracted by the originality of the car. There wasn’t much changed on it. The original cage is in it with some additions.

“I want to run it as is for the next three or four years and then eventually put it back to full VP spec. Lucky enough I have all the genuine body panels from Gibson – even the front bar as ‘Sandown’ and the date and numbering underneath it – and rear spoiler, bonnet and guards that have never been used.

“I’ve run it three times at Barbagallo on sprint days but 18 months ago it got a bit warm and the engine cooked a bit. So it’s been a while since it has run but it’s on pause with being busy with work and family. I’m getting antsy though watching all my mates out there having a run on-track and not me!”

The owner is also on the hunt for the first original CAMS logbook for this chassis, which would have covered entries for 1993 to 1996. If you know any details about it, flick the V8 Sleuth an email: aaron@v8sleuth.com.au

Get in touch with the V8 Sleuth via the following methods:
Email: aaron@v8sleuth.com.au
Twitter: http://twitter.com/v8sleuth
Facebook: www.facebook.com/v8sleuth

22/05/2013
Related Content
Saturday Sleuthing: The Malaysian Falcon  ›
18/05/2013
Saturday Sleuthing: Bathurst Runner-Up  ›
11/05/2013
Stay In The Know
Sign up to the Virgin Australia Supercars Championship Newsletter
We use cookies to ensure that we give you the best experience on our website. If you continue to use this site we will assume that you are happy with it.Ok