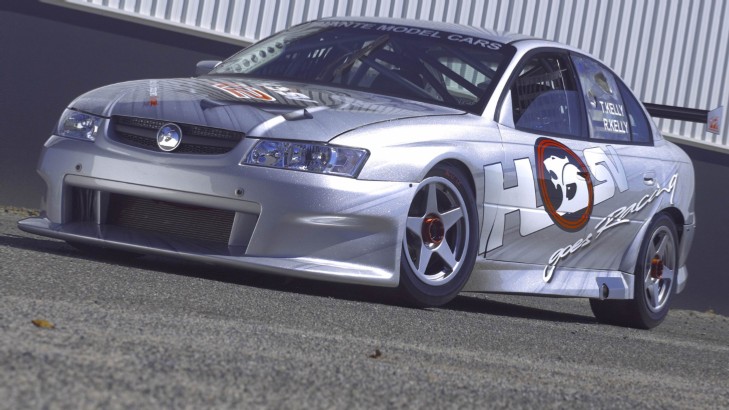 OUR V8 Sleuth Aaron Noonan gets plenty of emails every week from V8 Supercar fans and in recent weeks an email rolled in from reader Mark Watson asking about a car he'd lost track of - and really never understood much about it to begin with!

He referred to a silver HSV (Holden Special Vehicles) Commodore V8 Supercar he recalls going for a ride in at Phillip Island in the mid-2000s.

"I remember it being totally silver inside and out and given the fact it was HSV-branded and driven by Todd and Rick Kelly, I just assumed it was an ex-Holden Racing Team Commodore," he writes.

"But something makes me think it may not have been - and that just makes me completely puzzled as to what car I went for a ride in!"

Well, fear not Mark, our V8 Sleuth can put your mind at ease.

It was built brand new in 2001 by Acott Race Craft for the team and debuted in Cameron McConville's hands at the non-championship event at Albert Park at the start of that year.

McConville drove it throughout the sprint round element of that year's championship, including surviving a rollover at Winton that required a range of repairs!

A new car was debuted by McConville and co-driver Rick Bates at Bathurst so this car reverted to team owners Trevor Ashby and Steve Reed. The popular privateer pair finished 11th in what was their 16th straight - and final - Bathurst start.

But their Bathurst car had to be returned to action for McConville to drive in the final round at Sandown given his newer version had been damaged in New Zealand.

For the second time in the space of a year, McConville ended up rolling it over! After being squeezed into turn 1 with contact between Mark Larkham and Rodney Forbes, the Lansvale team managed to repair their car and get Cameron back onto the track the next day!

Former Minardi F1 driver Alex Yoong tested it as well as Lansvale endurance pilot Tim Leahey before it made one race start in the final round of the '03 championship at Eastern Creek with former Lansvale mechanic David Krause driving under the #24 Romano Racing franchise.

The Lansvale team was sold off for 2004 and became Tasman Motorsport, with a splash of orange, silver and black paint replacing the yellow, red and blue of the team's previous identity.

The late Jason Richards ran this car in 2004 prior to the debut of a new VY model at Queensland Raceway and this car then became something of a spare.

It was sold off to Rick and Todd Kelly, who then engaged car-craftsman extraordinaire Rick Wyatt to completely rebuild it with a reported spend of around $100,000 and a range of ex-HRT and HSVDT parts implemented.

While the car was modified to VZ specification on the outside to mirror the race cars of the period, underneath the car still retained a Chev 18-degree engine and VX spec front suspension.

It was dubbed 'K2' and appeared in March 2005 in 'chrome shade' and 'black candy' colours making it appear very, very different from its previous life as a Lansvale/Tasman race car.

The car essentially took over from the ride car that HRT had been using for a few years (built from the left-overs of the Craig Lowndes 1999 Calder roll-over) and it then morphed into the 'T2' ride car for 2007 with a split livery - HRT down one side, HSV Dealer Team down the other.

It was sold off in 2008 to Western Australian Adrian Schrarenguivel, who re-liveried it to a HRT-like scheme and raced it in local Sports Sedan racing at Barbagallo, winning the state title in 2009.

It was sold again in 2014 to Graeme Strong and son Brendan with the father and son team making their Kumho V8 Touring Car debut at Wakefield Park last October with Brendan at the helm.

This year the team has taken in further rounds of the Kumho Series and would you believe that this very car again found itself on its roof at Sandown?

Strong had a gentle roll over at the Esses right at the end of Friday practice this year, the incident occurring at the opposite end of the circuit to McConville's roll-over in the same car 14 years earlier!

The car is competing this weekend among a field of ex-V8 Supercars in the penultimate round of the Kumho V8 Touring Car Series at Phillip Island, proof that old V8 Supercars don't go to wreck and ruin - they just keep on racing on!