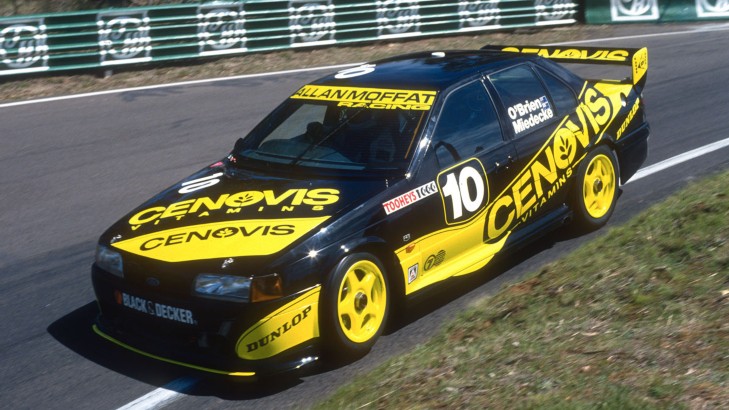 One driver whose cars are a regular request from Saturday Sleuthing readers is V8 Supercar Hall of Famer Allan Moffat.

Today we take a look at the last of his long line of Bathurst contenders, the distinctive Cenovis Vitamins Ford Falcon EB.

Never having the budget to run the car full-time in the Australian Touring Car Championship, the Cenovis Falcon only made four race appearances in the hands of Moffat's team and each year that race was Bathurst.

Built new for Moffat as an EB Falcon in 1993 by Russell Caddy and Ian Walburn, the car debuted at the mountain that year in the black and fluro yellow colours of Cenovis with driving duties shared between Andrew Miedecke and Charlie O'Brien.

Most notably however was the car's carburetor-fed V8 engine, supplied by US performance giants Holman and Moody in place of the regular fuel injection systems run by all other teams.

The car retired early in 1993 with gearbox problems after running as high as 14th, but bounced back in 1994 to record a strong eighth position finish, again driven by Miedecke joined by British Touring Car Championship star Jeff Allam.

Terminal electrical problems sidelined the car after just 16 laps of the '95 race, but its return 12 months later would see it have a strong result and thus also close the curtain on an important chapter of Bathurst race history.

For the 1996 race this EB Falcon wasn't the newest specification car on the grid, but what it lacked in latest spec parts it more than made up for in driving talent.

German ace Klaus Niedzwiedz, who had raced for Moffat at Bathurst previously in Sierras (and taken pole for the 1990 race) was confirmed for his first Bathurst start in four years and was paired in the #9 Falcon with MoTec electronic guru and production car stalwart Ken Douglas.

Niedzwiedz clocked a 2m17.2706s in Friday qualifying to put the car 25th on the grid and when race day dawned wet, the circuit became a treacherous ice rink. Douglas was given the opening stint for the 161-lap race and steadily made is way up to run in 16th position.

Pitting under a Safety Car on lap 29 the team switched to slicks, and put in Niedzwiedz for his first Bathurst race stint aboard a Falcon after four previous starts in Sierras.

Niedzwiedz's prior Bathurst experience shone through, slicing his way around the circuit and lifting the Moffat car to fourth in the running order by lap 50 up against the likes of the big budget full-time times.

"That was the greatest experience of my life, to drive here on slicks in the wet," he beamed after the stint. "I nearly went off when I lost my drink bottle. I looked up and I was on the grass!"

Douglas would have a similar heart-stopping moment in his next stint on lap 73 when he spun at the exit of the Dipper. Amazingly, he was able to perform a neat 'flick turn' in front of the oncoming traffic and get the Cenovis Ford running again, pitting on lap 96 to hand back to Niedzwiedz.

The pit stop dropped them to 12th place and off the lead lap, but there were other small problems starting to appear. The exhaust was heating up the floor, causing the cabin to fill with smoke and the temperature gauge was now running hot.

Removing some of the blanking tape from the front spoiler rectified this and Niedzwiedz was able to push on.

As the rain disappeared it also exposed the car's lack of overall horsepower up and down the Mountain and the #9 Falcon found it more difficult to keep pace with the field.

The team would ultimately cross the line to finish in 10th position, four laps down on winners Craig Lowndes and Greg Murphy in the Holden Racing Team Commodore.

In doing so it also closed the curtain on Allan Moffat's direct connection to the Bathurst endurance race as either driver or team owner, one that stretched right back to his debut in 1969 in the factory Ford squad.

Without a racing budget the car sat idle before being sold on to Alan Heath in 1998. Heath updated the car to EL specifications and ran at Bathurst that year with Douglas as co-driver but the car was involved in a massive multi-car accident when the South Australian car owner was tagged into the wall approaching Forrest's Elbow.

The damaged car was sent to MTA Group Training in South Australia where the students rebuilt the car for Ross Halliday to use in the inaugural 2000 Konica V8 Lites Series - now known as the Dunlop Series.

Halliday later put the car back to its original Cenovis livery and EB Falcon specification. It was later sold to passionate Perth-based collector Andy Brown, who owns the car today.

"I saw it advertised for sale in Australian Muscle Car magazine and thought that's gotta be a better investment than a painting!" he told our V8 Sleuth.

"The car looks great and it's got that Moffat name attached to it. Not many of his cars come up for sale so I grabbed this one."

For a period of nearly three decades Allan Moffat made the annual Bathurst race his life mission.

Bathurst 1996 with the Cenovis Falcon would ultimately be the last time a Moffat owned car would tackle the mountain, recording that famous name one last time in the race record books, and forever in the hearts of Australian race fans.

Saturday Sleuthing returns next Saturday, September 5, for a special story on a former Sandown-winning car as we count down to the Wilson Security Sandown 500 in Melbourne.