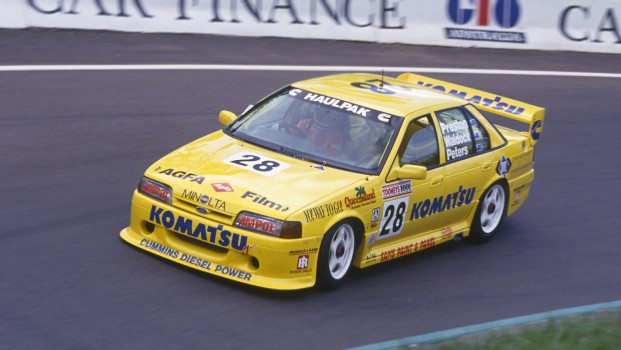 We’ve celebrated the end of the current five-litre/V8 Supercar technical regulations with the close of the 2012 V8 Supercars Championship, so it’s certainly appropriate to look back to the start of the era for this week’s column.

Back in 1993 there was a shortage of Ford teams in the grid. Beyond Glenn Seton’s Peter Jackson squad and Dick Johnson’s Shell team, privateer Falcon pilots were thin on the ground.

Now, we’ve tracked down the car to its current home in Melbourne and can bring you the story of one of the original cars of the five-litre/V8 Supercar era.

It was originally built ‘over the ditch’ under the direction of Barry Lock with Mark Jones and Craig Pullman working on the build in Auckland and Brett Bull flying backwards and forwards to oversee the construction of it.

It made its racing debut as the #28 Komatsu Falcon of Kevin Waldock and Brett Peters at the 1993 Sandown 500 and became the first privateer Falcon to hit the track under the new rules of the time.

Waldock was forced to have heart surgery in the lead up to Bathurst so former co-driver Mike Preston (who had been part of HRT’s line-up at Sandown) was drafted in to share it with Peters.

The car was updated to EB II spec for 1994 (with the addition of front winglets) and again driven by Waldock in a range of Australian Touring Car Championship events, including the non-title Gold Coast Indy events where he was shoved into the pit straight wall by Neil Crompton.

Preston co-drove with Waldock at Bathurst that year though the car crashed out early in the wet conditions before Waldock again drove it in 1995 prior to the debut of a new EF model – which we’ve previously featured here on Saturday Sleuthing.

Parts from this car were used to complete the build of the new EF, so this car sat around as a shell before it was purchased by John Briggs who built it back up and it appeared as a plain white #70 EF in the final round of the 1997 ATCC at Oran Park.

It was updated to EL specification for 1998 and Briggs ran it in Supercheap Auto livery, so therefore this car was Supercheap Auto’s first in V8 Supercar racing.

Briggs finished eighth in that year’s Privateers Cup after winning three of the Privateer’s Dashes during that season.

The car remained in Supercheap Auto colours in 1999 and was initially driven by Briggs again – including a run-in with Wayne Gardner at that year’s inaugural Sensational Adelaide 500 – before the team built a new AU model and this car reverted to becoming the #80 entry of Bob Thorn.

He ran at Bathurst with Todd Wanless as co-driver before crashing out early in the race and the car was placed up for sale in 2000 by John Briggs Motor Sport.

The car didn’t initially sell so Briggs’ team wheeled it back out for the Gold Coast Indy support event that year and it was used by John Bowe as the #600 CAT Falcon, thus protecting his regular AU to be prepared and ready for the Bathurst race.

It was eventually sold to Todd Wanless, who raced it in Sports Sedans to increase his V8 experience given he was driving an ex-Ambrose AU Falcon for Paul Cruickshank’s team in the development series.

After being sold to Rod Dawson the car then found its way into the hands of Victorian racer Keith Linnell, who retains the car in Melbourne and has been getting back into racing it lately after some quiet time.

“It’s in the Supercheap colours that it ran at Bathurst in 1999,” Linnell told our V8 Sleuth this week.

“I’ve had the car for about seven years now. I ran it a few times in the early days but I’m just sort of getting back into it a bit.

“I ran it in the mid to late 2000s in the Touring Car Challenge series that used to run as part of the AMRS with Super Tourers and V8s and touring cars all running together.

“It’s one of the first cars of the V8 era. It hasn’t been molestered and still has got all the original bits. It’s survived and it’s been kept original.”

Linnell says he intends to hang onto the car and is keen to run in the V8 Touring Car Heritage Event next October at Wakefield Park where a range of ex-V8 Supercars in their liveries of the day will appear.

He ran the car in this year’s Australian Hillclimb Championship at Bathurst, proving that you can take cars away from Mount Panorama over time – but they just keep on finding ways to get back to that magical piece of bitumen!

And it’s this story where we leave Saturday Sleuthing for the moment.

The regular column has become one of the most popular elements of the BigPond Sport V8 Supercars website over the last 18 months or so.

The V8 Sleuth, Aaron Noonan, has been amazed at the support the stories have received from fans and the V8 Supercar industry and wishes everyone a fantastic Christmas and a safe and successful 2013.

Saturday Sleuthing will live on somehow, somewhere next season so watch this space …

Tanders Plate Up For Foodbank

19/12/2012
Stay In The Know
Sign up to the Virgin Australia Supercars Championship Newsletter
We use cookies to ensure that we give you the best experience on our website. If you continue to use this site we will assume that you are happy with it.Ok