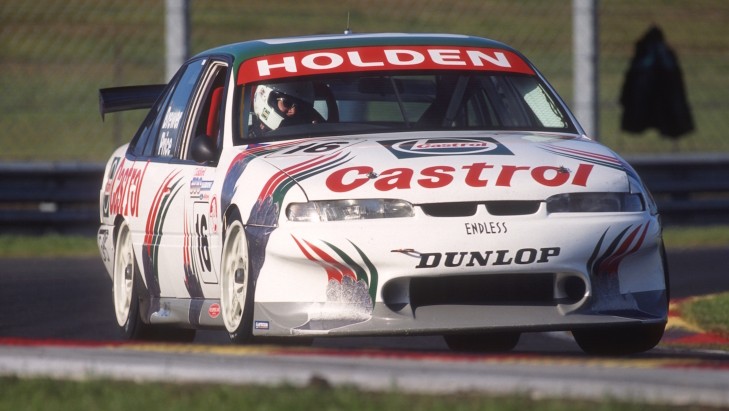 Next weekend all eyes will be on Mount Panorama for the Supercheap Auto Bathurst 1000, the biggest race of the V8 Supercars Championship.

Many of the eyes on the Mountain will also be on one of two wildcard entries in this year's race - the Harvey Norman Supergirls Falcon FG X driven by Swiss IndyCar racer Simona De Silvestro and Queenslander Renee Gracie.

They will be the first all-female combination to compete in the Bathurst 1000 since Melinda Price and Kerryn Brewer paired up in the Castrol Cougars entry to finish 11th in 1998.

And the news of the girls competing at Bathurst prompted regular Saturday Sleuthing reader Brendan Daly to get in touch with a question for V8 Sleuth Aaron Noonan.

"I remember that the Cougars car ran a Holden engine whereas all of the other cars ran with the Chevs," he writes.

"That car had a very distinctive livery with plenty of colours down the side of it to make it look different to the regular Castrol cars.

"But it seems to have disappeared into thin air and I haven't seen it for a very long time. Can you fill me in on where it has ended up?"

The good news is Brendan that it is very much still around, but the fact you haven't seen it for a while is simply due to the fact the car today sits in different colours from another, important, part of its racing history.

The Cougars car was a Commodore built and run by Larry Perkins' Castrol team and it now sits in the National Motor Racing Museum at Mount Panorama in its 1995 #11 livery as it won the '95 Tooheys 1000 at Bathurst in the hands of Perkins and Russell Ingall. 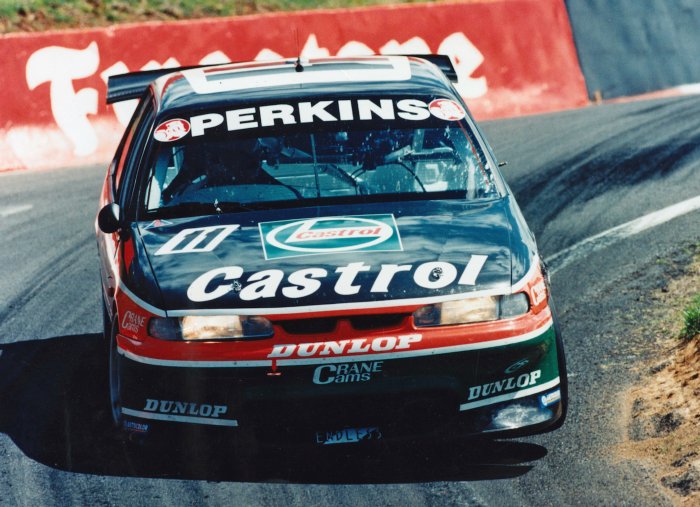 This was the very car in which Perkins and Ingall went from last on the track to eventually claim a very popular win.

Perkins had a touch with Craig Lowndes off the startling line in that year's Bathurst race that ripped the tyre valve out of his front Dunlop and he was forced to limp slowly back to the pits for a replacement.

From there he and Ingall hunted down the field and came storming home as leader Glenn Seton's engine expired with just nine laps remaining.

The car that eventually became the Castrol Cougars car had only done one race - the Sandown 500 - when it claimed victory at Bathurst in 1995.

For the following season it became Ingall's #8 Castrol Commodore VR when he joined Perkins' team on a full-time basis. 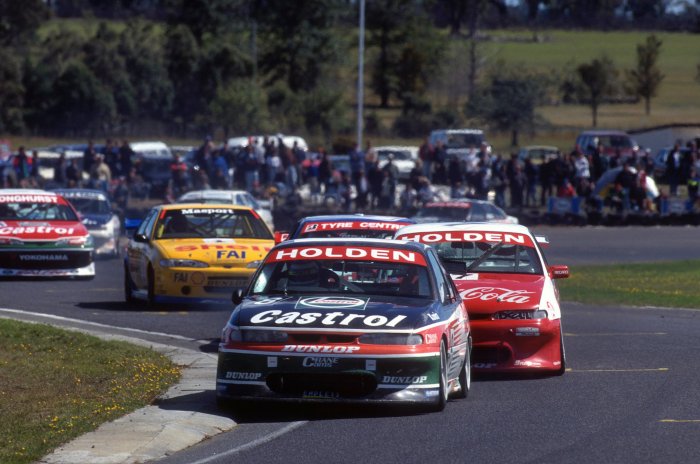 He won the Calder round in Melbourne, his first Australian Touring Car Championship/V8 Supercars Championship round victory, and also finished sixth in the pointscore.

Rested for the endurance races at Sandown and Bathurst (this was the year Perkins went 'back to the future' by 'de-speccing' a VR to VP to get around an parity adjustment to the front undertray of the new model), the 'Cougars' car returned to the track for the end-of-year Mobil Sprints in New Zealand with Ingall driving at Pukekohe and on the tight and bumpy street layout in Wellington.

An off-season cosmetic nose-lift was given to her for 1997 as all top-line Commodores runners updated from VR to VS specification and Ingall began the season in the car at Albert Park's non-championship event (where he blitzed the field to claim all three race wins).

It ran the opening Calder ATCC round under lights in his hands before making its last start as Ingall's stead at Phillip Island, where he sent it out in style with overall round victory and led home Perkins in a 1-2 for the weekend.

Perkins debuted another new car in round three at Sandown, handing his car on to Ingall and the 1995 Bathurst winner became the Castrol Cougars entry.

Female racers Melinda Price and Kerryn Brewer took over the car, which had a Holden V8 inserted into its engine bay in place of a Chevrolet power unit.

Brewer was given the first opportunity to race it, competing at Lakeside in Queensland. That round was the first V8 round held since the news broke that Peter Brock would retire at the end of the season.

The two girls alternated rounds for the remainder of the season before they paired up at Sandown and Bathurst. Price crashed at Griffins Bend in qualifying at Mount Panorama, prompting the duo to start at the rear of the 41 car field, but they had a solid day and finished 12th overall. 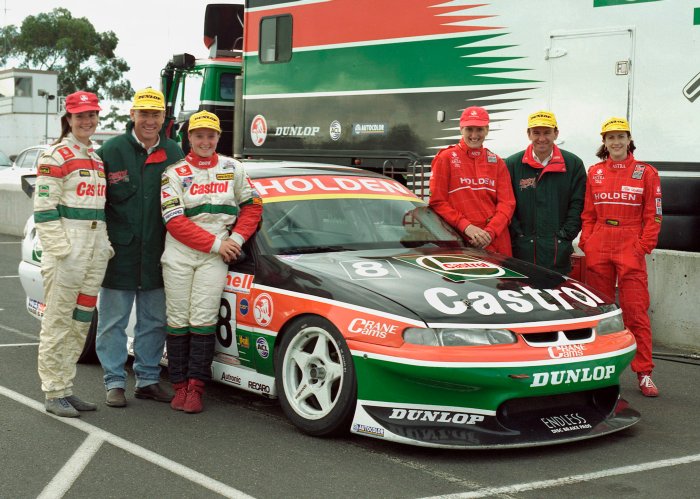 The program continued into 1998 and again the two shared rounds of the championship before again competing in the endurance races, culminating in an 11-placed finish at Bathurst.

The Castrol Cougars program ended at the completion of that season, however not before Larry Perkins became a 'Cougar' too!

The six-time Bathurst winner in fact drove the girls car at the non-championship V8 Supercar event at the 1998 Gold Coast Indy event in order to protect his team's brand new VT model Commodore. 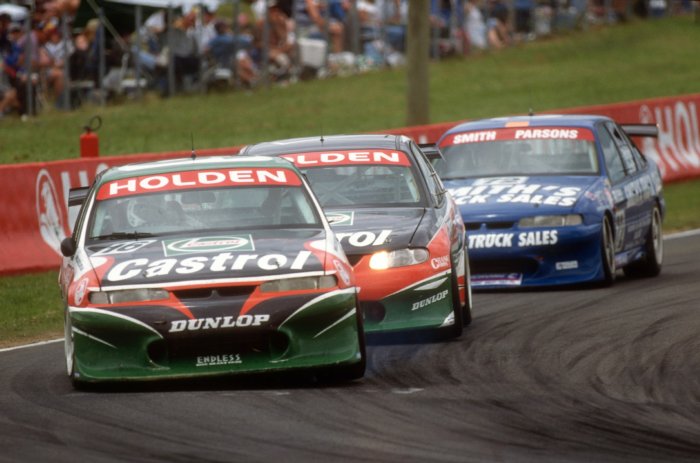 This was at a time where the V8 Bathurst race was held in mid-November, meaning the Surfers Paradise event (run in October back then) and its feared concrete block walls had plenty of teams opting for spare cars for the non-points hit-out.

The Cougars car was sold and driven by David 'Truckie' Parsons in a handful of 1999 sprint rounds before it was sold to Kiwi Chris Butler to use in the inaugural Dunlop Series season in 2000 (then known as Konica V8 Lites Series). 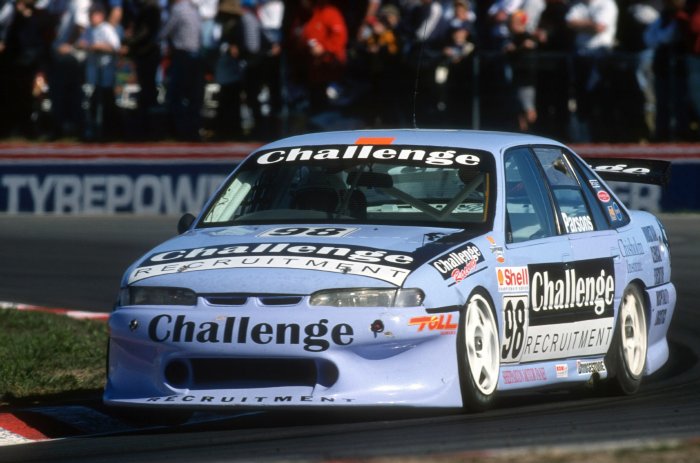 PGA Tour golfer Richard Green, who later became firm friends with the late Jason Richards, owned the car for a time and used it for track days before it went through the hands of another two owners before ending up with current owner Dave Shewan.

Shewan purchased the car - Perkins Engineering chassis 027 - in 2013 and has kept it on display in the Bathurst Museum.

It may very well be worth paying a trip to go and pay the 1995 winner - and former Castrol Cougars car - a trip if you're up at the Supercheap Auto Bathurst 1000 next weekend!

What car would you like to see featured in an upcoming story?To get in touch with the V8 Sleuth, you can do so via the following methods:

01/10/2015
Stay In The Know
Sign up to the Virgin Australia Supercars Championship Newsletter
We use cookies to ensure that we give you the best experience on our website. If you continue to use this site we will assume that you are happy with it.Ok