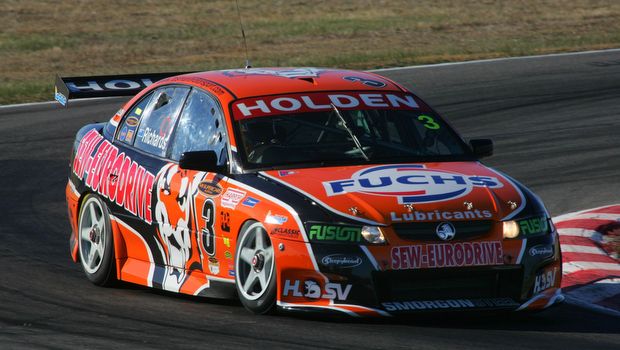 TODAY is certainly a sad day in the V8 Supercar family give it's exactly one year that Jason Richards passed away.

In some way, shape or form his career and ultimately his fight with cancer touched many of us.

One of the standout elements of Jason that we remember today is what he showed time and time again – he was an out and out racer.

Going fast and extracting as much speed as possible from the V8 Supercar underneath him was the focus of his life for so many years, so today we bring you a rundown of the actual cars 'JR' used in his career.

The fact Jason Richards drove them gives them their own special piece in the history of the V8 Supercars Championship.

Our V8 Sleuth Aaron Noonan has taken an emotional trip back down memory lane and even dug into his own archives for some behind-the-scenes images that have never before been published – until now.

While it's Jason Richards the man that we miss, a range of things will keep him in hearts and minds for years to come.

The cars in which he applied his craft remain as a reminder of the passion, focus, drive and determination of a very special man that we miss greatly.

Next week – Saturday December 22 – will be the final Saturday Sleuthing column for 2012.

Many fans will remember that Jason made his V8 Supercar debut at Bathurst for Team Kiwi Racing in 2000 alongside countryman Angus Fogg.

They finished a very creditable 15th in an ex-Castrol Perkins Commodore, which was PE chassis 035 and actually the first Perkins Engineering Commodore built with a chomemoly roll cage.

Richards retained this chassis for the next two years while he drove for TKR and it was updated from VT to VX specification partway through 2001.

The team did purchase another car – PE 036 – during '01 to become its second car driven in selected events by Fogg and eventually it became the spare for the team, though only a check of the log book would show whether it was used in Richards' hands at some stage during this time with the team.

We believe this car remains in the hands of Mark Papendell in Adelaide – who last raced it in the Development Series in 2006 – so a check up with his logbook would confirm just which car was used by TKR at which event.

The PE 035 chassis appeared for sale on New Zealand trading website TradeMe last year with TKR boss David John as the content – it's understood to remain in New Zealand.

Richards made the move to the new Team Dynamik for 2003 and had a brand new car constructed for him that he debuted at the Albert Park non-championship event.

In fact, it's the same chassis – TD 001 – that we featured a while back on Saturday Sleuthing that has been restored to the #45 livery that Jason ran it in (and rolled it in at Pukekohe!) and it returned to the track this year in the V8 Touring Car Series in August in the hands of Justin Garioch and THR Developments.

This car is often believed to be the one that Richards was driving when he diced with Mark Skaife in the wet in the 2003 Sandown 500 – but that's not the case.

That day Richards teamed up with Simon Wills in Wills' regular car (which had previously been the 1999 Bathurst-winning Wynn's VT before being updated to VY spec).

At Bathurst the team debuted a new car – TD 002 – though this did not go well and Richards stepped back into his regular TD 001 chassis for the Gold Coast and Pukekohe – and we all know how that finished up!

Richards made the move to the newly named Tasman Motorsport after Kevin Murphy and partners made a buy-out of the Lansvale Racing Team.

Richards signed up and initially steered an older VX Commodore that had been raced by Cameron McConville for Lansvale in 2001 but since then had been a spare.

The Kiwi ran the car – ARC 006 (Acott Race Craft) – in an impressive orange, silver and black livery before the team debuted the first of its new VY models (ARC 010).

The ARC 006 chassis eventually became the car that Rick and Todd Kelly turned into the silver HSV K2 ride car and it now lives in Perth.

Richards ran the new VY from Queensland Raceway through to the end of the season, sharing it in the enduros at Sandown and Bathurst with Fabian Coulthard.

A certain young bloke called Jamie Whincup tested it alongside Coulthard at Oran Park mid-season with a view to getting a gig in the endurance races, but ultimately it became his car when he landed a full-time drive with Tasman the next season.

This car remains in Melbourne and is used by its current owner for sprint days and the like.

It's the car that he was driving when tipped into a multiple roll-over at Queensland Raceway and was completely rebuilt time in time for the next round at Oran Park.

Richards and Whincup used it to finish third at Sandown and second at Bathurst before it was retained by Richards for '06 and he used it to claim his one and only V8 Supercars Championship race win – a reverse grid win at Winton.

He ran in the enduros with Andrew Jones in the car – including that wild ride through the Chase when it became airborne for a few hundred metres – but then debuted a new car (ARC 023).

ARC 014 went through the hands of Greg Murphy Racing in the Development Series and now lives in Western Australia, while ARC 023 was built up very late in 2006 using the running gear from the original Tasman VY and Richards ran it in the final rounds at Symmons Plains, Bahrain and Phillip Island.

The car lives on today in the hands of Jim Pollicina and he took it to second place in this year's V8 Touring Car Series painted up in its 2006 orange Tasman livery – complete with Tasman tiger on the side!

The new built two new VE Commodores at the start of 2007 and Richards started in ARC 027, though he and teammate Greg Murphy swapped cars from the Eastern Creek round onwards, placing Richards into ARC 026 for the rest of the season.

The duo drove Murphy's 027 car for Bathurst where they finished fourth, while Richards took his 026 car to a podium result on the Gold Coast.

Jason retained the 026 chassis for the 2008 season with Sprint Gas joining Tasman as its naming rights backer before the Kiwi debuted a new car – TMS 002 – at the Sandown round that June.

It would be in this TMS 002 chassis that Richards and Murphy would finish second at Bathurst in, and added to that the fact that Richards joined the exclusive '2m06s' club at the Mountain, lapping in 2m06.9076s in Saturday morning practice.

The TMS 002 chassis would be driven by Jason Bargwanna in 2009, taken to the 2010 Development Series crown by Steve Owen and this year was run by Dale Wood before being sold to Jim Pollicina, who debuted in it in the DVS in the final round in Sydney.

'JR' drove it all season in '09, which included his career first pole position in Darwin and the runner-up result he and Cameron McConville achieved at Bathurst.

He moved into a new car – WR 10 – for the 2010 season, driving the car from the opening event in Abu Dhabi through the endurance races and it's the car he made his last appearance in the V8 Supercars Championship aboard at Symmons Plains shortly before he was diagnosed with a tumor in his abdomen.

While that was his final V8SC run in the car, he did step back into it one more time to race, as this was the car he drove as the #14 Team BOC entry in his inspirational appearance at the non-championship event at Albert Park last year.

A second place in Race 2 may as well have been a win as Richards showed that despite being sick, he was still as much 'Racing Jason' as ever before.

The sister chassis – WR 11 – had become the #8 Team BOC car last year raced by Jason Bright, though Richards did slip behind the wheel of it at the pre-season test day at Eastern Creek as well as some of the Friday practice sessions when his health permitted.

Richards' one-off appearance in the opening round of the 2011 Development Series in Adelaide was made in one of his old cars – the ARC 027 chassis he'd driven early in the 2007 season and at that year's endurance races.

The Kiwi took a memorable race win in Race 2 in Adelaide, which would prove to be his last race win before his passing.

James Brock and Nick Cassidy used the car in latter rounds of the series before being it was used in a one-off round start by Matt Hansen in Perth this year and later sold to Jim Pollicina.

11/12/2012
Stay In The Know
Sign up to the Virgin Australia Supercars Championship Newsletter
We use cookies to ensure that we give you the best experience on our website. If you continue to use this site we will assume that you are happy with it.Ok