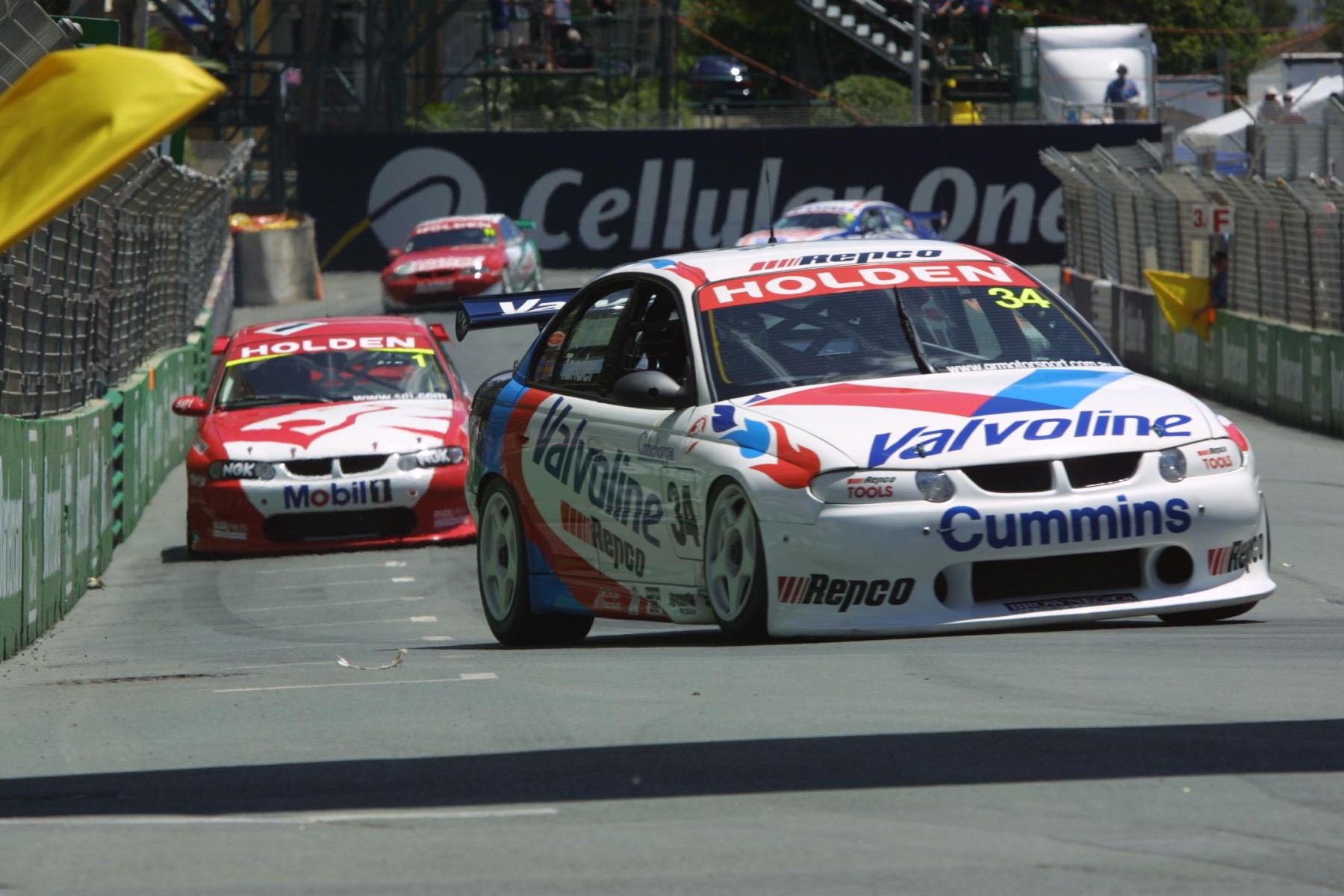 As the Virgin Australia Supercars Championship heads for the sun, sand and surf of the Castrol Gold Coast 600, this week on Saturday Sleuthing we reach back in time 15 years to take a closer look at Garth Tander’s 2001 Honda Indy-winning GRM Valvoline Commodore.

Tander will celebrate his 250th round start at next weekend’s Gold Coast event though, while the sun might be setting on his time driving for the Holden Racing Team, back in 2001 Tander was one of the brand’s hottest young guns with Garry Rogers’ team.

2001 was the last year that Supercar racing on the streets of Surfers was not for championship points. Many treated it as a holiday in the sun, instead preserving their cars for Pukekohe just a fortnight away and not putting their best foot forward – but Tander wasn’t one of them. 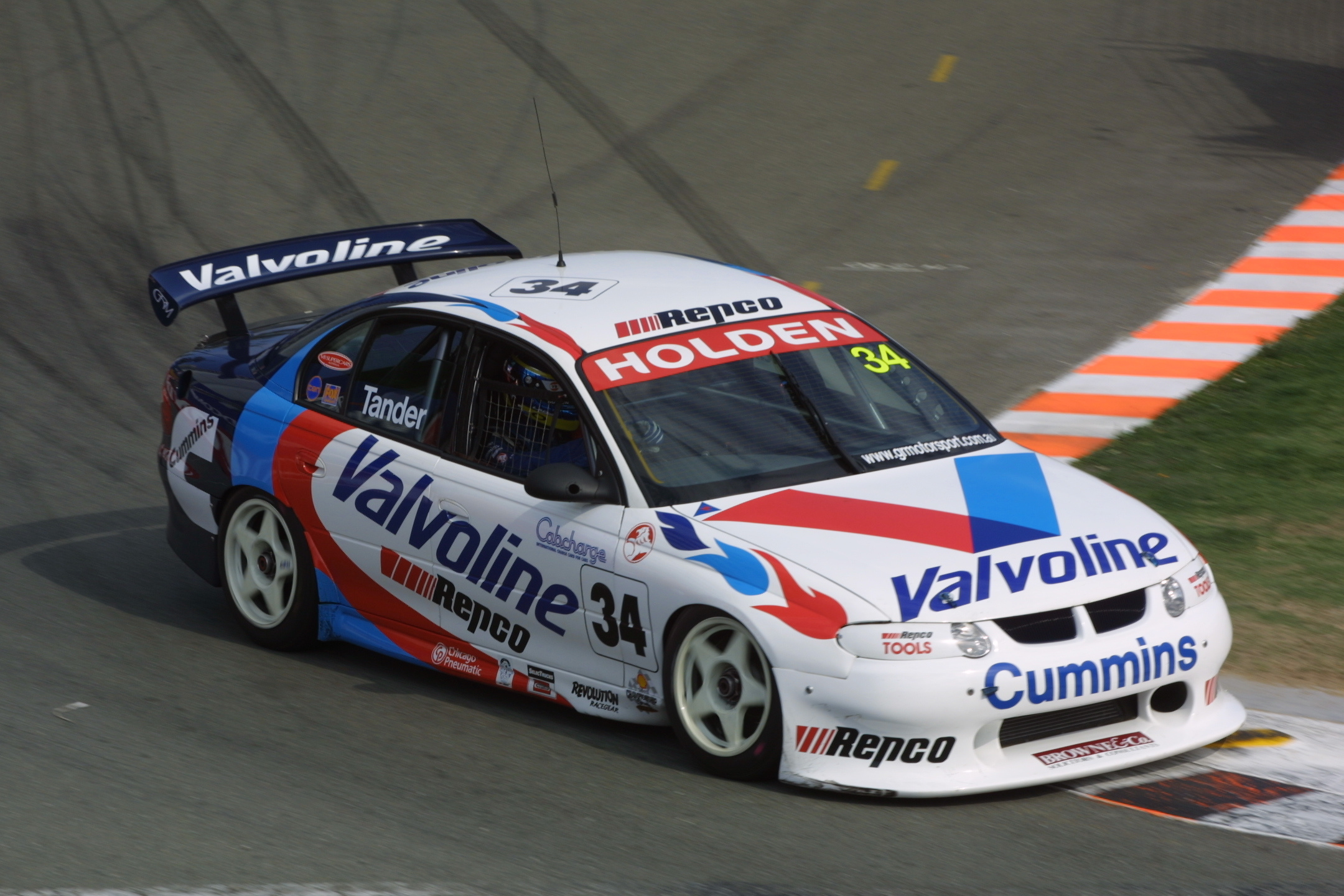 Tander fought off Mark Skaife to take victory in two of the weekend’s three races. He led the second race until he locked the rear brakes of the GRM car heading into Bartercard corner, allowing Skaife through to take the win.

Fortunately for Tander, Skaife repeated the error in race three, allowing Tander through to take victory in the third and final race as well as the win for the weekend overall.

This was Tander and GRM’s first visit to the podium since taking victory in the 2000 Bathurst 1000 with Jason Bargwanna. Otherwise, the 2001 season had been a pretty miserable one for the team.

The car that Tander was driving on the Gold Coast in 2001 was GRM VX04, a brand new VX Commodore built by the team in late 2000.

This car replaced the team’s VT Commodore Bathurst winner that had been Tander’s regular championship mount.

VX04 was debuted in Tander’s hands at the Australian Grand Prix support races in 2001 and was his #34 championship car all year, finishing on the podium at the GMC 400 in Canberra.

Tander and Bargwanna used this chassis in the 2001 endurance races, finishing 15th at Queensland Raceway and sixth at Bathurst. 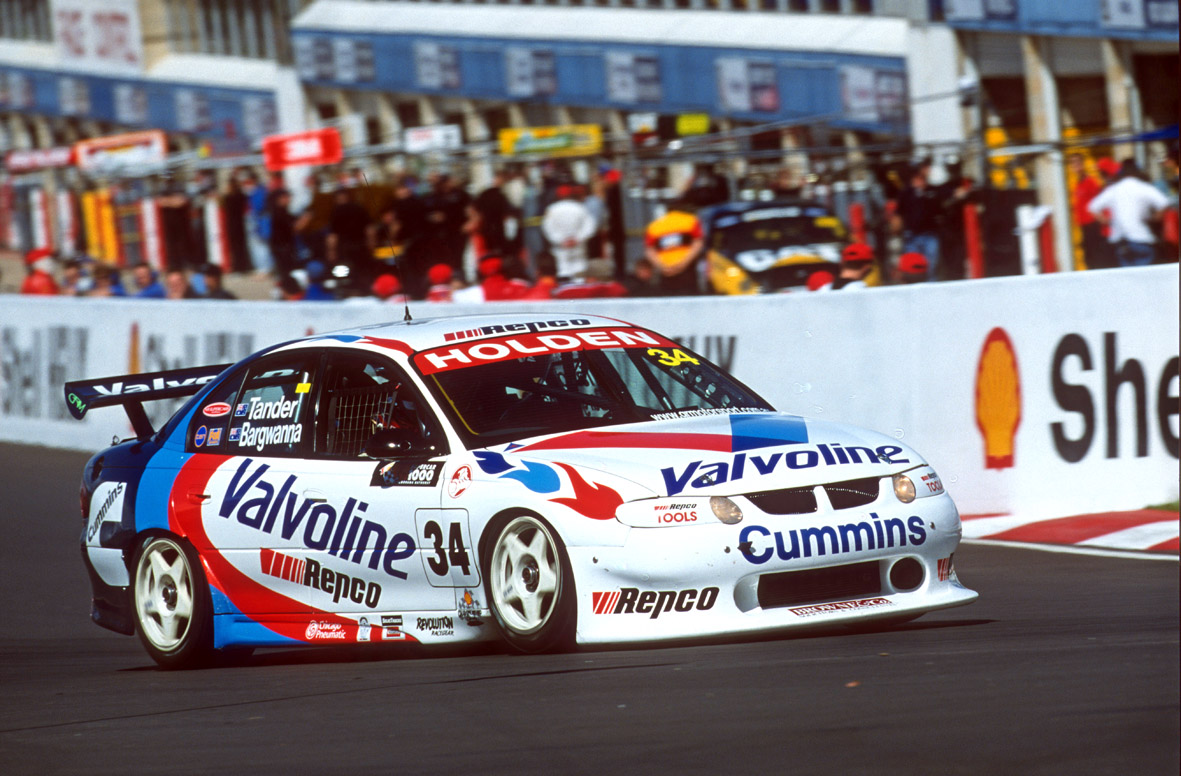 Tander retained the car for the 2002 season and again joined with Bargwanna to finish third in the Queensland 500, though they failed to finish at Bathurst.

For the final round of the year at Sandown the car swapped numbers to run #427, a reference to the team winning the Bathurst 24 Hour for Holden in the Monaro 427.

For 2003 the chassis was passed to Team Kiwi Racing for Craig Baird to drive after TKR entered into a technical partnership with GRM. 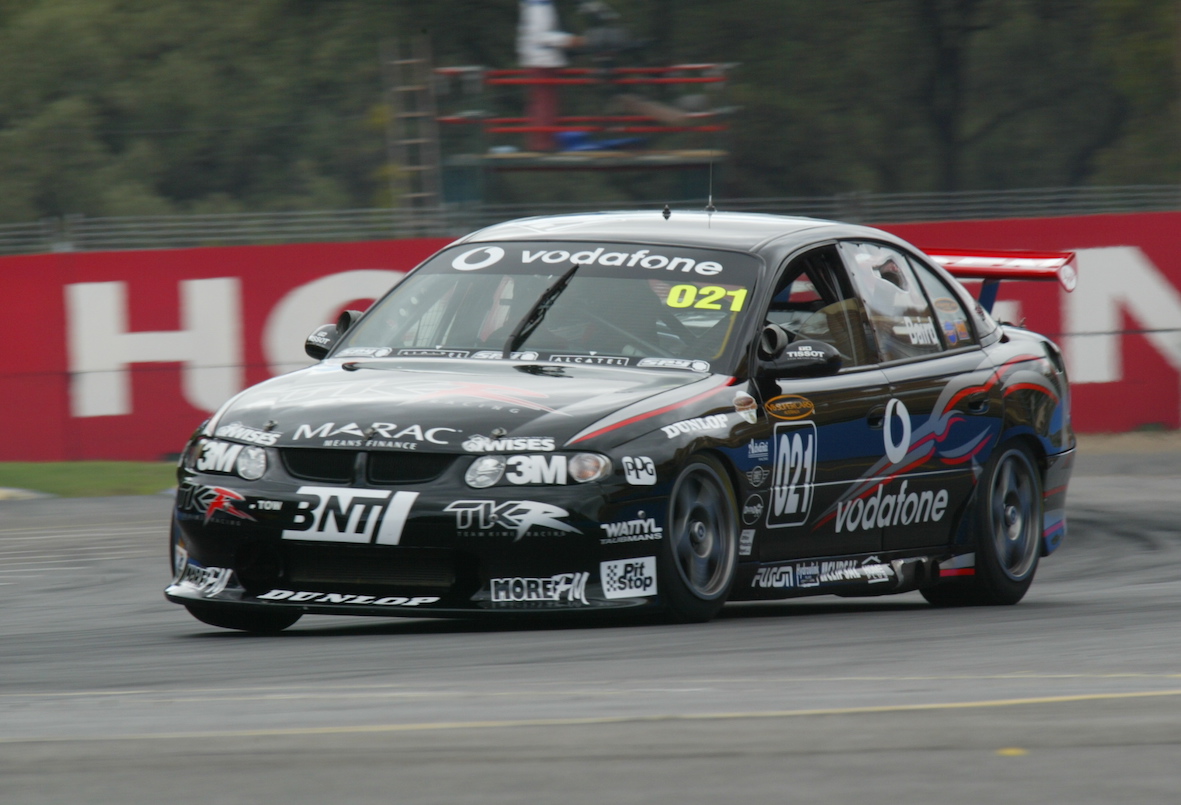 This partnership lasted for only the first three rounds of the championship before the deal fell apart and the car was returned to the GRM workshop, not to race again for the remainder of the year.

In 2004 the car was sold to Robert Tebb and his Sydney Star & Bus Team and driven by Grant Elliott in the 2004 and 2005 Development Series with GRM engine program assistance.

The car was upgraded to VY specification in 2006 and driven by Aussie Racing Cars driver Tim Monte in that year’s Fujitsu Series with Stephen Voight (Ipswich) and Derek Hocking (Mallala) also competing aboard it.

The car was retained as a spare chassis for 2007 although it reappeared on the track at the Wakefield Park round of the Fujitsu Series round with Taz Douglas making his V8 Supercar debut in it.

In 2008 the car was leased to Aaron McGill to drive at Sandown’s Fujitsu Series round after a multi-car pile-up at Wakefield Park had damaged his Falcon. He also drove it at Queensland Raceway. 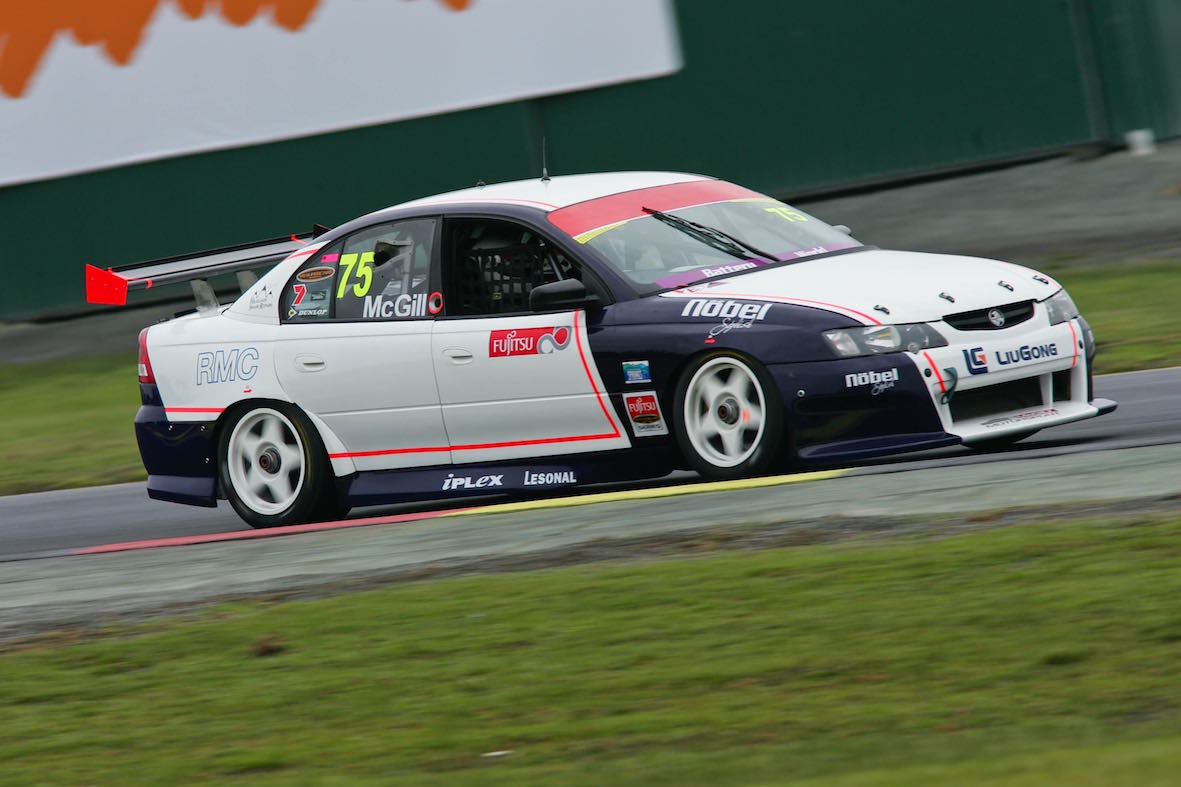 This chassis remained with Robert Tebb and his team throughout 2009 and 2010, only racing once more in the hands of Aaron Tebb at the Winton round of the V8 Touring Car Series before being sold.

Derek Hocking ran the car in the 2011 Kumho Series before it eventually appeared for sale via auction a year later, passing through the hands of another owner before ending up with Touring Car Masters regular Tony Edwards.

In late 2013 Edwards began the process of converting the car back to its VX specification and Valvoline/GRM livery.

At the time of writing the car had been restored back to an all-white VX Commodore and was heading to the signwriters to have the livery applied. 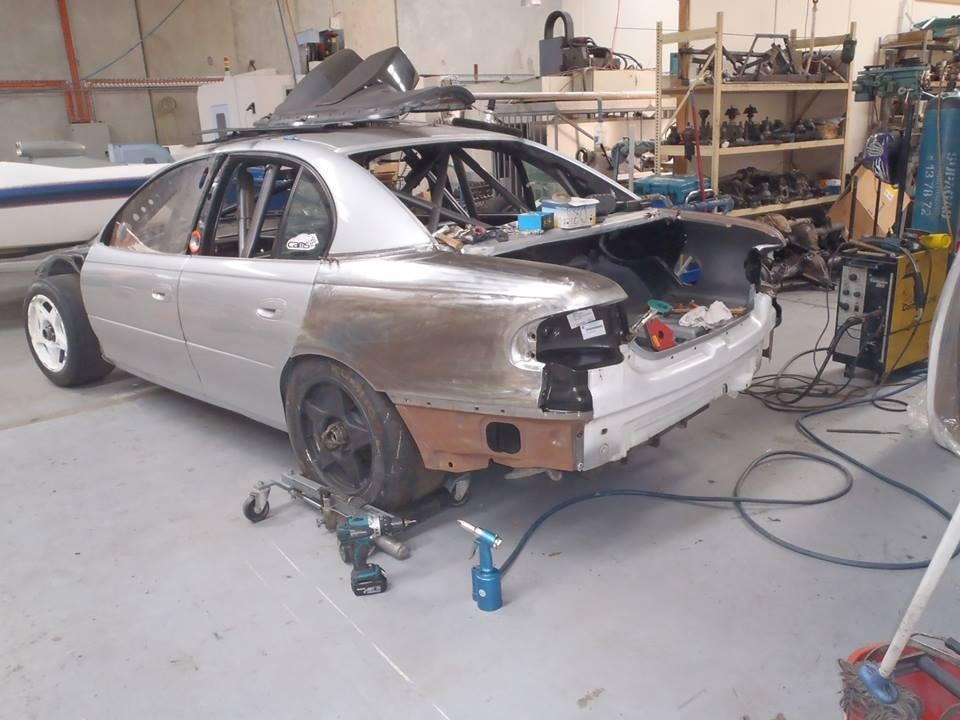 In an interesting twist, Edwards was at Indy in 2001 and spoke with Tander on the grid before one of the races.

“We’d had a drink with him in one of the clubs up on the Coast in the days leading up to Indy,” he recalls.

“I was working for Indy and I told him I’d say g’day on the grid.

“He got a hell of a shock when I stuck my head in the window of VX04 and said hello while he was waiting on the grid.

“It’s ironic that years later I own that actual car, now I just need to get him to sell me the surfboard (trophy) he won that weekend!”

When the restoration is complete Edwards plans to race the car in the Kumho Series and later in Historic competition when the early five-litre touring car/V8 Supercars are made eligible.

Saturday Sleuthing takes a break next week for the Castrol Gold Coast 600 but returns on Saturday October 29 with a special story ahead of the Pukekohe event focusing on an interesting car from Greg Murphy’s career – don’t miss it!