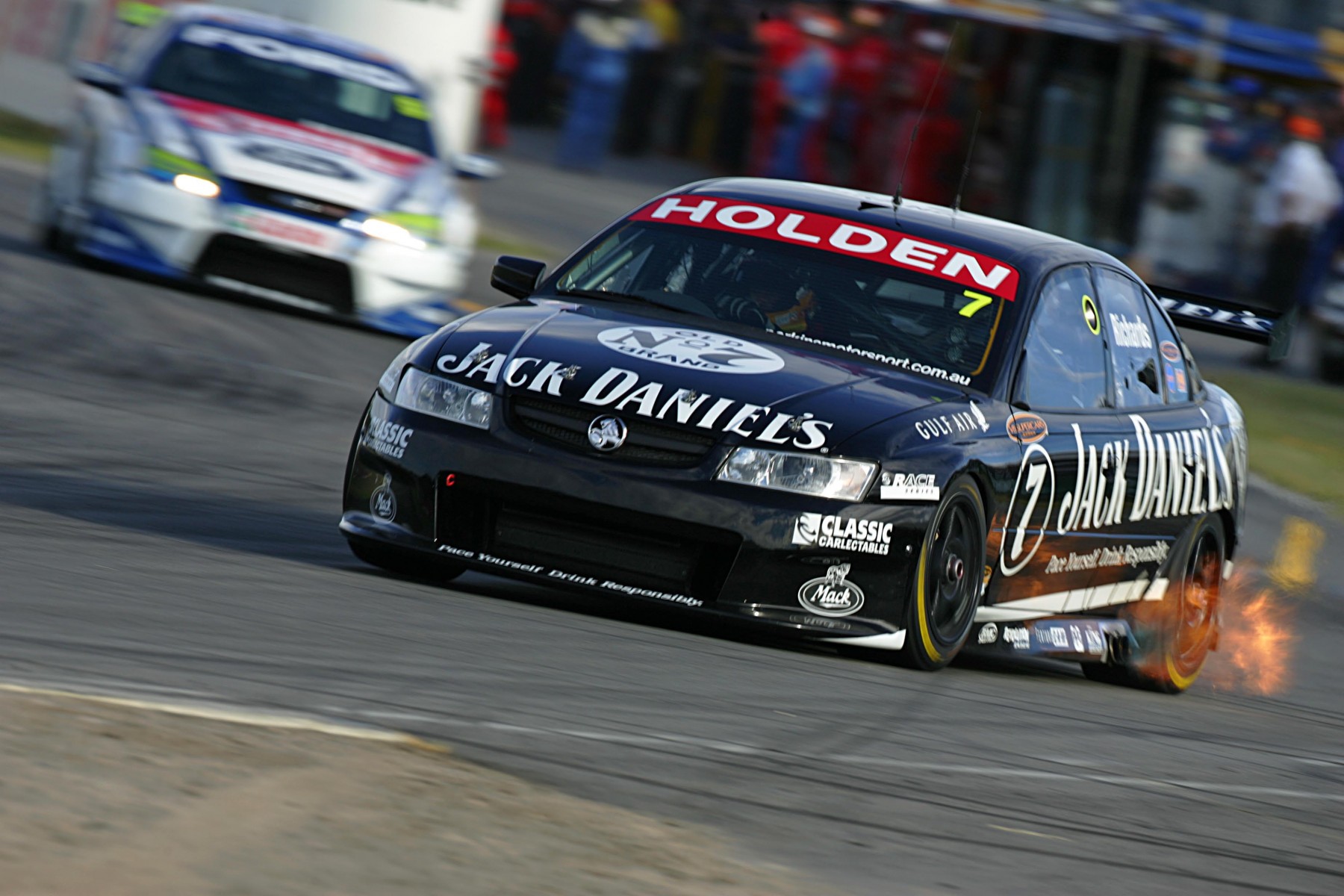 As the Virgin Australia Supercars Championship begins its annual pilgrimage across the Nullabour to Barbagallo for next weekend’s Perth SuperSprint, this week on Saturday Sleuthing we’re going to take a look at the car that Steve Richards drove to victory in the west a decade ago in 2006.

Richards’ win in the #7 Jack Daniel’s Commodore for Larry Perkins’ team was notable because he won none of the weekend’s three races, instead claiming the overall round victory via sheer consistency.

Race two on the Sunday was a reverse grid format, certainly a controversial decision for that was dumped later that season.

Richards started way in 30th grid position but the JD team used a clever strategy to get their driver through the field and into a position to challenge for the lead.

21 of the 31-car field peeled into the pits to complete their compulsory pit stop within the first 10 laps – but not Richards.

The Jack Daniel’s car stayed out longer in fresh air and was able to keep solid lap speed without being affected by any traffic. This allowed him to build a time buffer over main competitor Skaife.

Richards finished the race a brilliant second after leader Paul Radisich was bumped into a spin at the very last corner with fuel pump dramas and handed Dean Canto victory.

But, importantly, Skaife crossed the line just 23 seconds behind Richards with 15 cars between them. As a result Richards doubled Skaife’s points haul and took a sizeable advantage into race three.

A large deposit of Barbagallo’s infamous sand left on the track by a back-marker sent race leaders Richards and Garth Tander off the track, handing the lead and ultimately the race win to Skaife.

Richards recovered to come home seventh, marginally beating Skaife to the overall round win by just a handful of points. 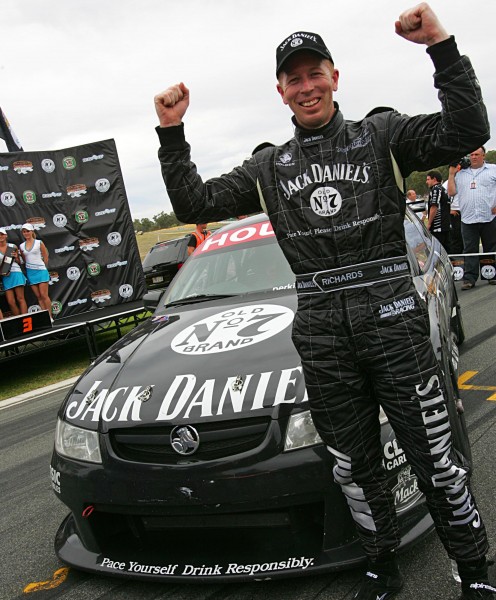 This was Richards’ second V8 Supercar round win for Perkins Engineering. Ironically the first had come 12 months earlier at the very same circuit.

The car Richards drove to victory at Barbagallo in 2006 was Perkins Engineering’s chassis ‘PE 044’. This was the last VZ Commodore built by the team before the introduction of the all-new VE model.

Richards debuted PE 044 in the famous black and white livery of the team’s new major sponsor Jack Daniel’s at the 2006 Clipsal 500 in Adelaide with a solid fifth place finish in its first-up start.

Prior to the overall victory at Barbagallo the car had tasted victory already at the non-championship Albert Park Grand Prix event when Richards claimed a pair of race wins.

Paul Dumbrell joined Richards in the car for the Sandown and Bathurst endurance races, a bent steering arm that broke sent the former into the wall at Sandown but things could have been a whole lot worse at Mount Panorama.

The team’s Bathurst campaign started scarily in Thursday practice when a tyre failure sent Richards into a 250km/h spin down Conrod Straight. Thankfully the car was repairable and the rest of the team’s race week was far simpler, ending up in fifth position on race day.

Sixth overall at Symmons Plains, fifth in Bahrain and fourth at Phillip Island closed the year out with encouraging results for Richards to finish achieve seventh in the driver’s championship.

PE 044 was retained by Perkins Engineering for 2007 and raced by Jack Perkins as the #11 Jack Daniel’s car in the first three rounds of the year before he had a major practice accident in it at Pukekohe Park in New Zealand. 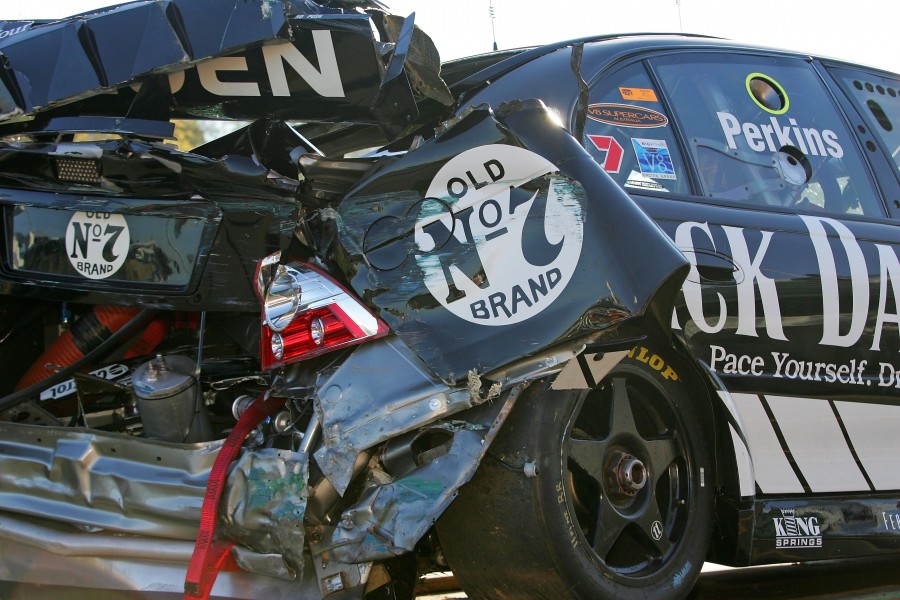 In 2008 the car was purchased by former V8 Supercar privateer John Trimble for his son Michael to drive as the #64 Globaljet Commodore in the Fujitsu Series prepared and run by Independent Race Cars. 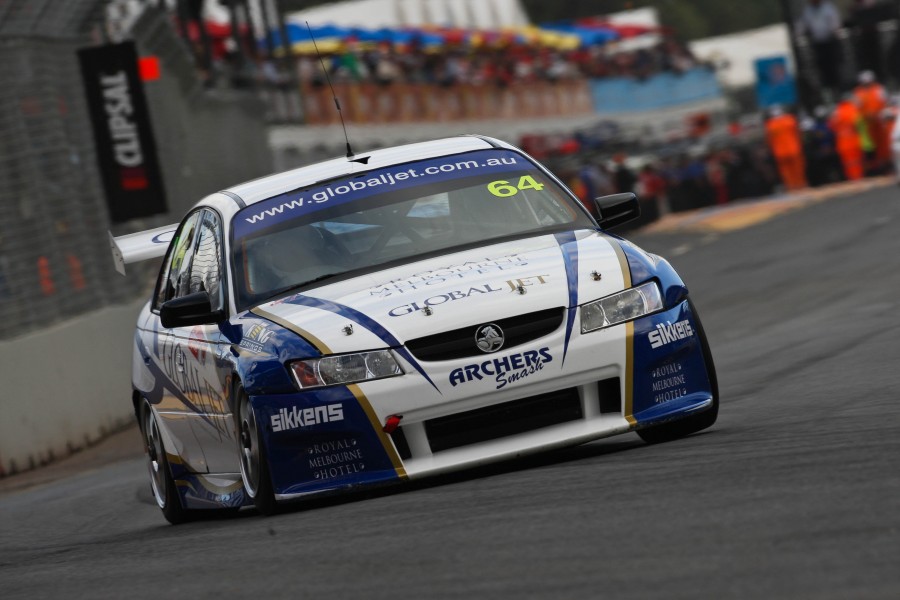 The car sat idle in 2009 and 2010 before again changing hands, this time being purchased by former Konica Series driver Bob McDonald.

Since then the PE 044 Commodore has competed primarily in the New South Wales Sports Sedan Championship with Simon Copping driving (Copping was formerly team manager for Peter Doulman and John Cotter’s privateer team), so it’s great to see this ex-Jack Daniel’s car racing on a decade after its victory at Barbagallo.

Saturday Sleuthing will take a break next weekend but will return to v8supercars.com.au on May 14 with a special focus on a Kumho V8 Touring Car ahead of the series joining the support bill for the Woodstock Winton SuperSprint the following weekend.

26/04/2016
Stay In The Know
Sign up to the Virgin Australia Supercars Championship Newsletter
We use cookies to ensure that we give you the best experience on our website. If you continue to use this site we will assume that you are happy with it.Ok