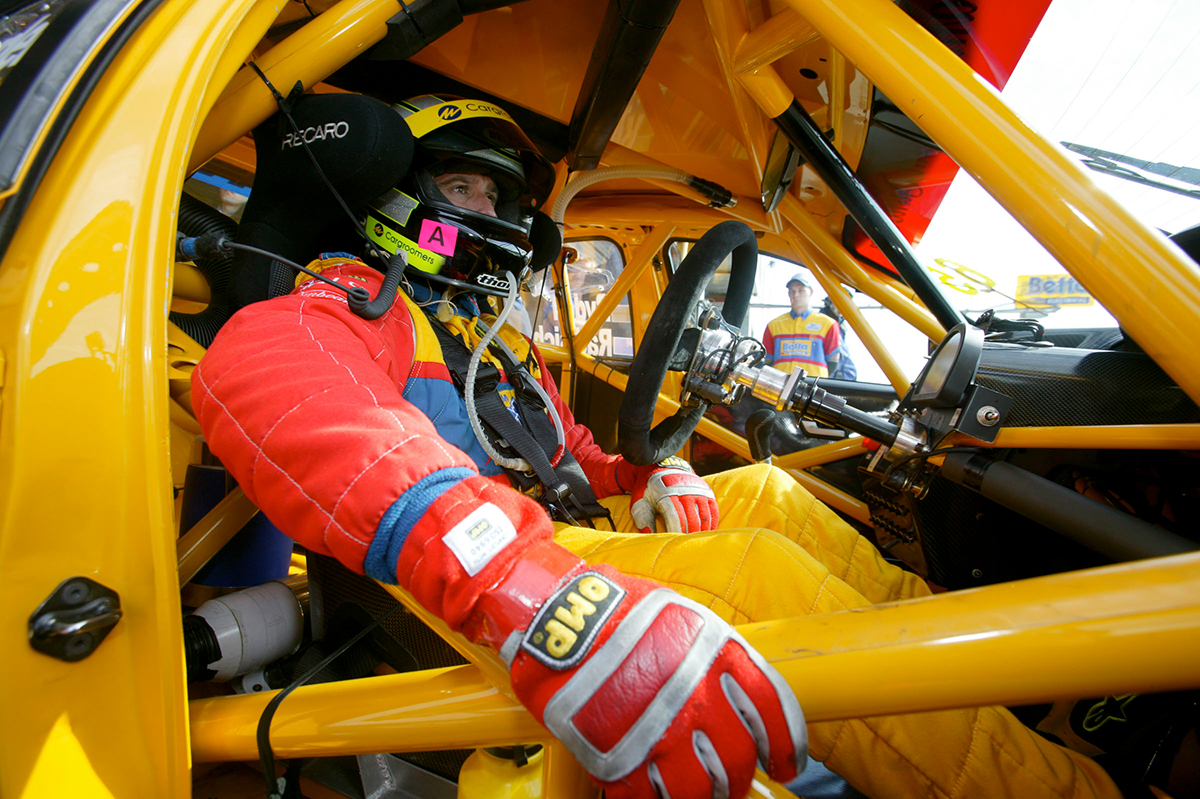 Hardened from trying to make it in single-seater racing and then by the glory years of the British Touring Car Championship, Paul Radisich remains one of the toughest drivers to have ever tackled Supercars.

The Kiwi ace forged a worldwide reputation as a winner in the two-litre era of the BTCC and claimed back-to-back FIA Touring Car World Cups in 1993 and ’94 at the wheel of Andy Rouse-run factory Ford Mondeos.

But when the bubble burst on the BTCC and he found himself out of a drive in the wake of Peugeot’s withdrawal, Radisich looked to Australia for his next home and began a career here that spanned a decade and 107 rounds of the Supercars Championship. 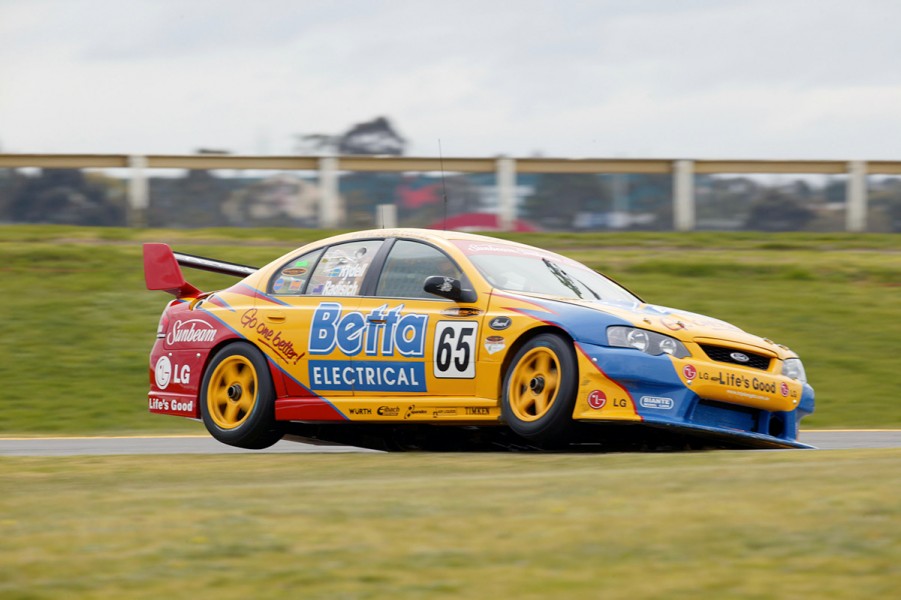 Triple Eight arrived in Supercars at Sandown in 2003

From spending four seasons with Dick Johnson Racing from 1999 to 2002, the softly-spoken Radisich moved to Briggs Motorsport for ’03, the year it became Triple Eight Race Engineering.

A stint with Team Kiwi Racing led him to endurance drives with the top-line HSV Dealer Team, though a nasty crash in Saturday practice at Bathurst in 2008 brought down the curtain on ‘The Rat’s professional racing career.

Nearly 10 years on from his final appearance in a Supercar, we caught up with Radisich in his homeland to find out what he’s doing now. 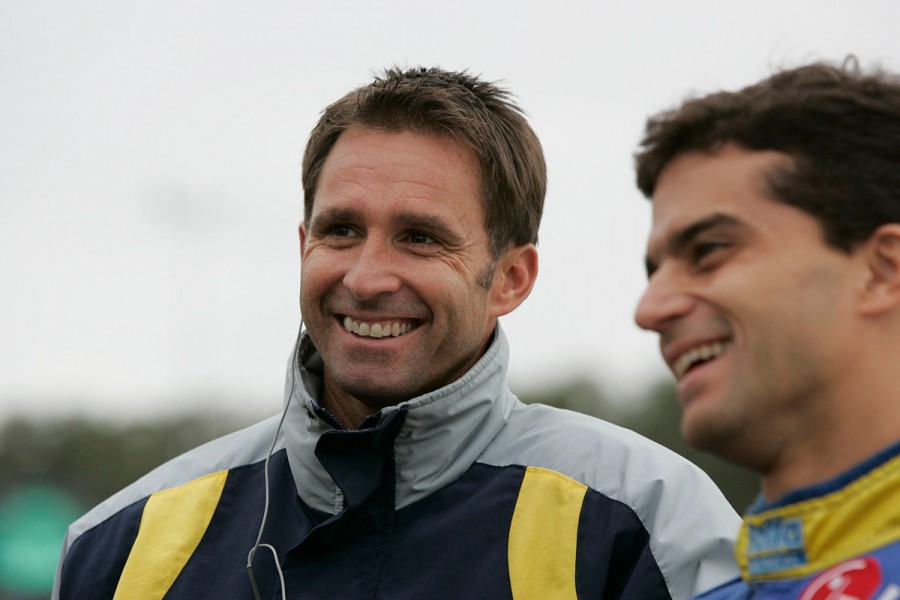 Put simply, what are you doing with yourself now and have you kept an involvement in motorsport?

I’m pouring oil! It’s (Aegis Oil) our family business that I bought off my father six years ago and I’m continuing on the heritage.

We’re New Zealand’s only oil blender, we blend all automotive products and oils, package it up, label it and sell it throughout New Zealand and the islands as well. So I’ve certainly kept the automotive theme going.

I still keep an eye on racing. After my crash at Bathurst I went back to the UK for a couple of years.

When I was well enough I did some historic motor racing with Roger Wills who had a full classic car stable.

I spent 12 months recuperating and driving historic cars, which was great fun, then headed back to New Zealand after a few years and took on the family business. 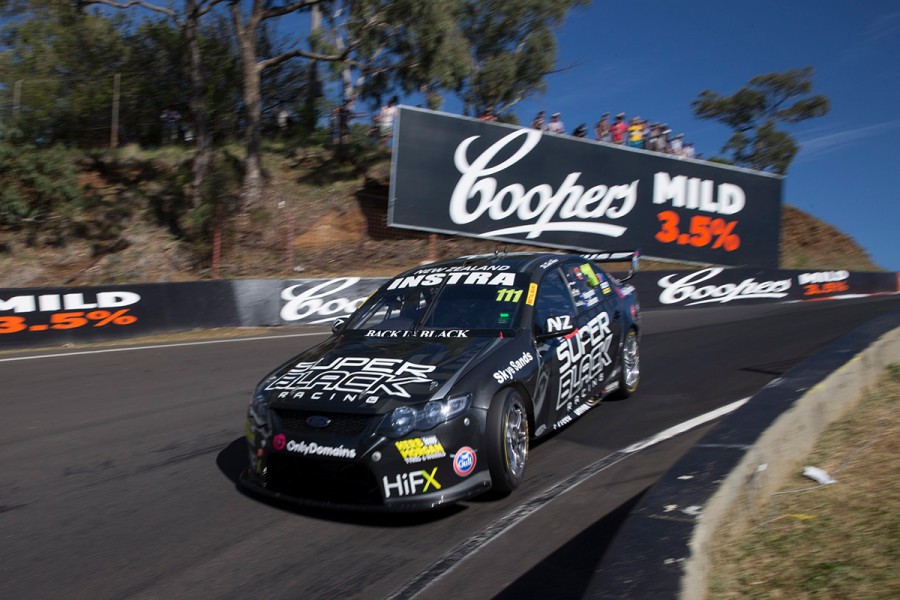 When I came back I was involved with NZ SuperTourers and helped launch that into New Zealand and spent 18 months doing that then the Super Black program materialised in Supercars.

I got involved and pieced it together then it eventually ended after a couple of seasons after Tony Lentino passed away.

The last few years I’ve been heavily involved in the business and working away on it.

I do the occasional classic event and go to Goodwood in the UK every few years and do some local stuff, but nothing serious, just for fun.

And we hear you’ve bought back one of your old BTCC Mondeos too?

When I was in the UK this car popped up, it’s the Andy Rouse/Kelvin Burt car, sister car to my World Cup-winning car from Donington ’94.

It became available through a few contacts and had a blown engine and was sitting in a back shed so I grabbed it and shot it back down to New Zealand and got it all running.

It’s sitting in the museum at Tony Quinn’s track at Highlands Motorsport Park. It’s a ’94-spec car, it’s probably never going to be really used, it will just grow old! 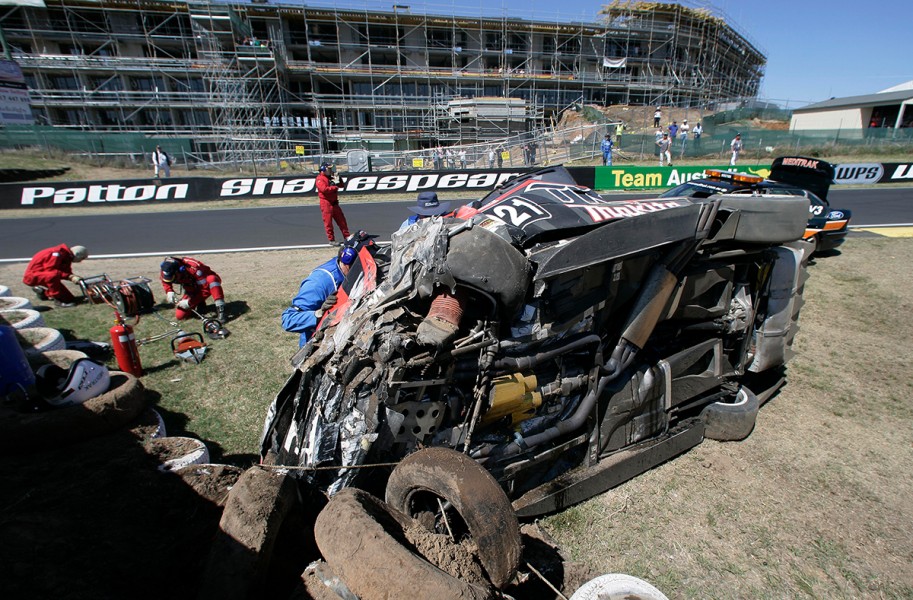 You mentioned your crash at Bathurst in ’08. It was the second big crash you’d had there in three years after a big one in the Team Kiwi Commodore in ’06. Do you have any lingering effects physically from them?

The first crash (above, during the 2006 race) not so much, but the second one took a few years to get over.

Not so much mentally but physically. I shattered all my feet and legs and it went right up to the vertebrae in my neck so they had to rebuild me!

I took a good thump, but I have to say I’m surprisingly good, but my marathon running days are well and truly over! But I’m travelling along just fine.

At the time I had just started to get my head around the fact I was happy to be an enduro driver and I had plenty of offers and work to last me for the next five years beyond that point. 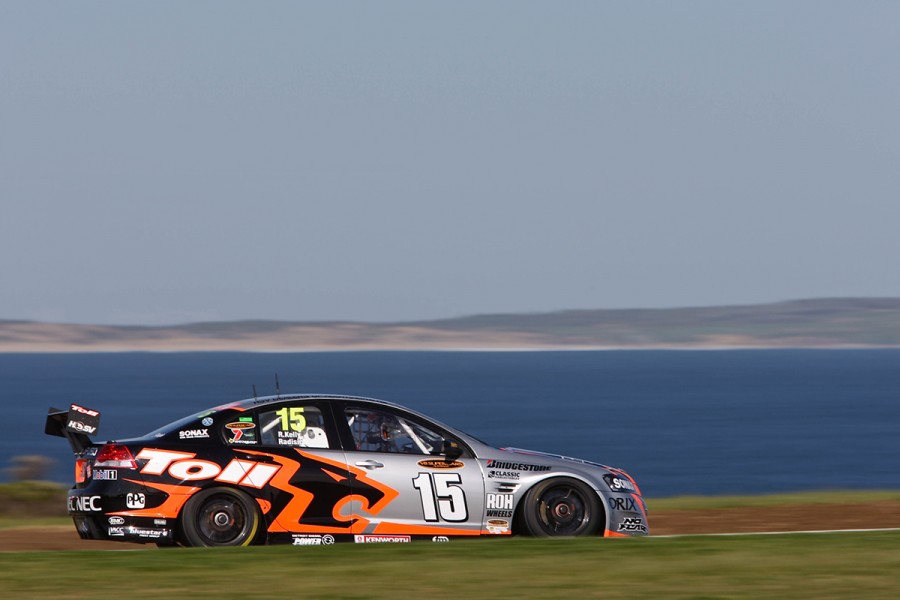 I found it difficult to take a step backwards and toe the line and do what is required [as a co-driver] but I think I would have morphed into it pretty well.

But it would have been a nicer way to retire rather than going to the track one Saturday morning and never going back to drive.

I always said when I got to 40 I would retire from racing. But when you get to 40 you think, ‘maybe another five years’!

I look at [Russell] Ingall and think maybe I could have got 10 years in! Ha, good on him! 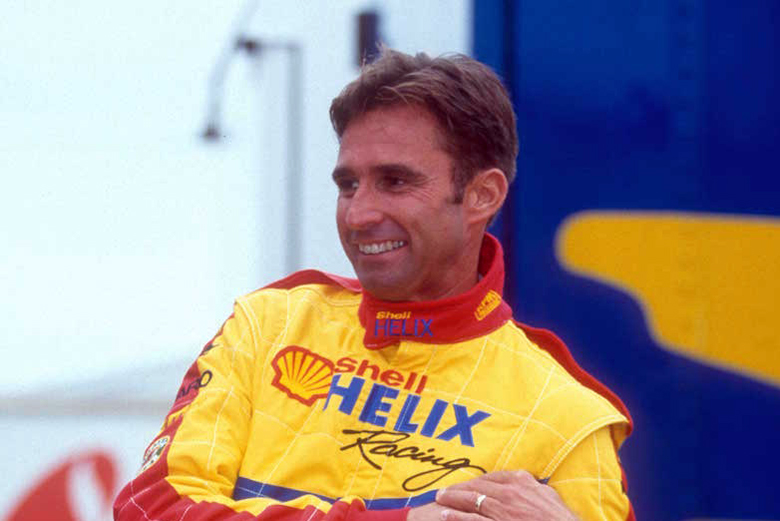 How did the drive with DJR in ’99 come together after John Bowe had decided to leave the Shell team?

I had gone to Peugeot in ’98 in the BTCC on a two-year deal because they were going to go to the French-built car for the following year, which would have been very competitive as Peugeot Britain had been running the program and it was a disaster.

So I was thinking it would be one year of pain for a few years of gain but they pulled the plug on the whole program at the end of ’98.

I had a call from Wayne Cattach and it was a one-year program to come out and take over John’s role for Dick’s retirement season.

I stayed for four years, it was only ever a one-year deal [at the beginning] but we had such a strong showing at Bathurst (where Radisich and Steve Ellery nearly won) that I had an approach from Ford for me to stay with Dick and after many hours of conversation I did. 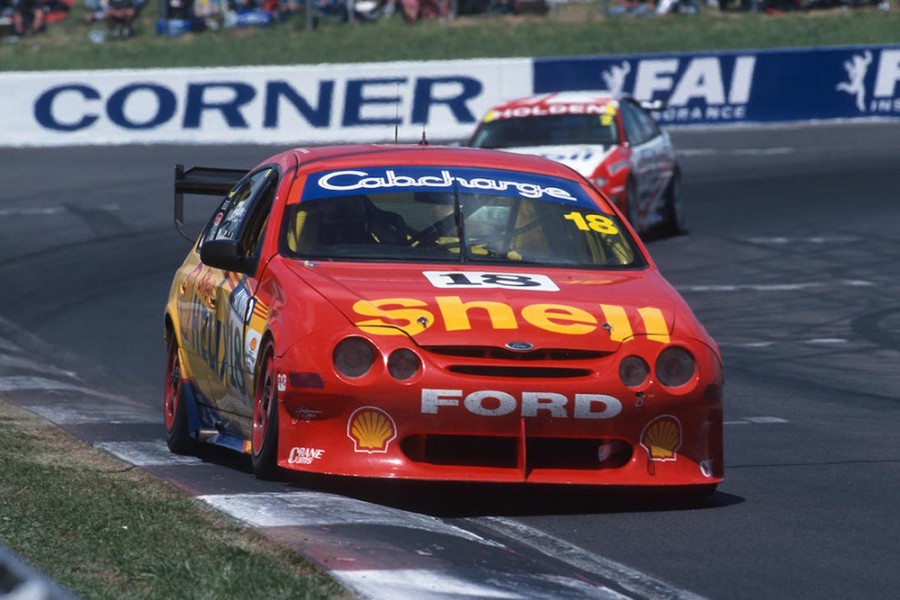 But at that stage I wanted to go to SBR (Stone Brothers Racing). I was talked around (to staying at DJR) and I enjoyed the year with Dick and everything was going reasonably OK, but my preference was to go to Stones.

In hindsight, that’s where I should have stuck to my guns and dug my heels in but I didn’t and the rest his history. 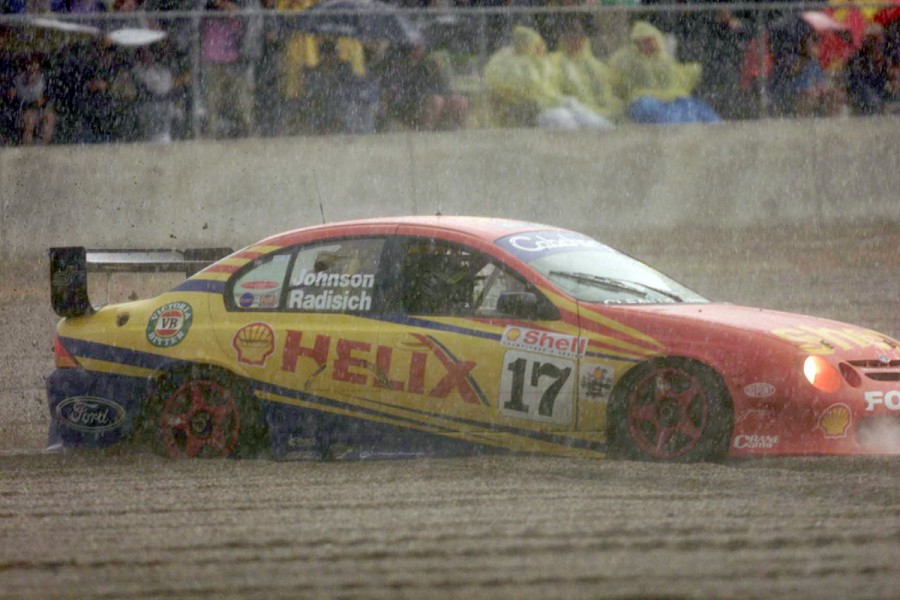 Every year we head to Queensland Raceway and your 2001 win there gets a run in the TV telecast. Parked in the sand in the pouring rain with shirtless fans surrounding you - what do you remember about that day?

It was a wild old day! We had the car pace and we led the race, we always seemed to come from the back to the front.

I got to the front, passed Russell the lap before to take the lead and I remember coming to the front straight thinking ‘shit, is that rain?’.

Holy hell it was rain alright, I was going backwards past the start/finish line and it was like a monsoon.

It’s funny how your brain says ‘you better slow down’ but your foot stays on the throttle! The next thing I know I am in the sand thinking ‘what a bloody idiot, you’ve thrown it all away’.

As I was walking back to the pits shaking off all the blokes with no shirts on I got the news we had won. It was a lovely surprise, but we deserved to win it anyway, Steve and I drove well that day. 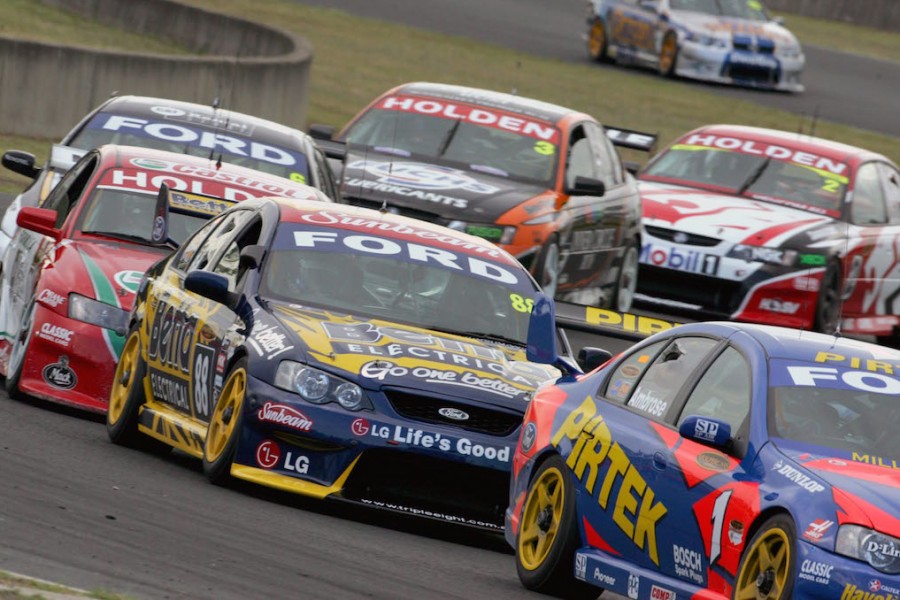 Many people overlook the fact that you were the driver that scored Triple Eight’s very first podium finish in Supercars, at Eastern Creek in your last round with the team in ’04.

How bitter did it taste knowing that you were departing and in seeing the results that flowed for the team after that?

I was bitterly disappointed when the contract expired and he decided to go the way he did (signing Craig Lowndes and Steve Ellery).

But at the end of the day it was a commercial decision and probably the right one for what he wanted to do. Getting Craig was a no-brainer.

I would have loved to have been team-mates with Craig and had that opportunity. The work we did from the beginning of that ’04 year to get that podium at the end of the season was huge.

Ludo [Lucroix] was great to work with; it was going to be a quick car, which was how it turned out in the years beyond that.

All of the same people from Briggs’ were there, engineers and the like. They just needed a bit of guidance and Ludo was able to provide that and make the car work properly.

All the ingredients were there; it just needed the last 10 or 15 percent to piece it all together.