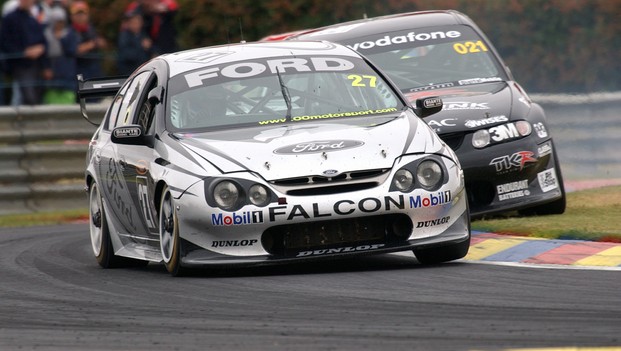 Craig Lowndes’Gibson/00 Motorsport Falcon is one of our most-requested cars but here’s thestory of its ‘stepsister’, which has had something of a ‘colourful’ journeyover its lifetime.

A few years of ‘Saturday Sleuthing’ on v8supercars.com.au has taught our V8 Sleuth Aaron Noonan a few things – and one of them iswhich cars the fans want to hear about.

One of the most commonly asked about cars in the Sleuth’s emailbox is Craig Lowndes’ ‘Green Eyed Monster’ Falcon AU from 2001/2002; a car wecovered on the site last year.

But some more emails about this car recently prompted ourSleuth to dip into the memory bank for what we could easily label its‘stepsister’ chassis.

As many V8 Supercar fans are aware, Lowndes’ signing to Fordin 2001 came with Gibson Motorsport. But the real money backer behind theformer Nissan team boss ‘buying back’ his old team from Gary Dumbrell wasactually Bob Forbes.

Gibson and Forbes parted ways late in ’01 and the team wasrenamed ’00 Motorsport’ for 2002 with Lowndes remaining as lead driver in the‘green eyed monster’ chassis he and Neil Crompton debuted at Bathurst in late2001.

While the team had three cars (Lowndes’ new car in additionto the ex-SBR and ex-Colourscan versions raced the previous season), it electedto build a new one for Crompton.

The paint may have been black and silver like Lowndes' #00car, though Crompton’s car was different. Labeled ‘GMS 015 AU 02’, it wasdifferent to Craig’s car given it was built using a Peter Beehag-supplied shellas opposed to the Ford-sourced shell Lowndes was running.

The new car made its racing debut at the 2002 Clipsal 500with Crompton running under #27, his third choice of number given #7 (his oldGIO and Coke number) and #17 were accounted for.

Crompton paired up with engineer Ross Holder and ran the carfor the entire V8 Supercar Championship Series, save for the endurance races atQueensland and Bathurst when it was rested and he co-drove with Lowndes.

It was something of a miserable season with Cromptonfinishing 17th in the pointscore, headlined by seventh overall atOran Park and 10th overall in the penultimate round at Pukekohe.

These days one of the world’s top-notch motorsportpresenters and commentators for Seven Sport, Crompton doesn’t hold the carfavourably in his heart – even though it was the last V8 Supercar he actuallyraced at Sandown that year.

“It drove us crazy all year with understeer,” Cromptonrecalled to the V8 Sleuth this week.

“To dial out the understeer it meant we had to dial inoversteer that threatened to spit you off the road!

“That year was also a change from Bridgestone to Dunlopcontrol tyre and the previous tyres had been superior to what we had in 2002.The superiority of the Bridgestone was the fronts were built as ‘steer’ tyresdesigned to do just that while the rears were built as ‘traction’ tyres. Itmade a big difference.

“It was a pretty miserable season with that car.”

With the BA Falcon introduced for 2003, this AU chassis was sold to Tony Noskefor 2003. He ran a single car operation for son Mark with Neal and Rick Batespiloting it in the endurance races as Noske Jnr accepted a deal to run withStone Brothers Racing.

It was repainted black and picked up backing from WPS latein the season, which was the start of what was to come with the colourful GoldCoast property identity Craig Gore.

Gore started his own team in 2004 and purchased the vastmajority of hardware from 00 Motorsport which had shut down operations partwaythrough the previous season.

Among the acquisitions was this chassis, which was intendedto be run as a Development Series car though it only ran one race for the teamat the non-championship Konica Minolta Series race at Bathurst in ’04 with NeilMcFadyen driving.

It appeared for sale in 2005 but did not sell and wasretained as a ride car and also served as a show car for the announcement ofthe race in Shanghai, China during this time.

Boxing champ Kostya Tszyu drove it at Queensland Raceway in2006 as part of a ‘swap lives for the day’ PR-stunt with then-WPS driver JasonBargwanna before the car was re-skinned to BA body panels to bring it into linewith the race car model of the period.

2006 Gold Coast Indy winner Nelson Philippe tested it atQueensland Raceway in 2007 and by this stage the team had started calling thecar its Falcon ‘BU’ considering it was a hybrid of AU and BA!

The WPS Racing V8 Supercar team closed down on the eve of the 2008 season sothis car disappeared from view for a while after the team’s fleet of threeactual racecars was moved on.

It popped back up again in June 2011 at an asset auction onthe Gold Coast in the wake of the collapse of WPS, reported by the Gold CoastBulletin as selling for the paltry sum of $28,500!

It had been advertised as an ex-Craig Lowndes car, thoughLowndes most certainly never raced this chassis.

Eventually it turned out that Queenslander Maurie Pickering(who now backs young guns Josh Hunter and Andre Heimgartner in the DunlopSeries) had purchased the car, which was in a black and gold Aussie Vineyardslivery rather than the more familiar WPS appearance.

Pickering and his team manager Brett Alderson decided thatconverting the car back to AU specification to be eligible for the Kumho V8Touring Car Series in 2012 was too big a project, instead on-selling the car toWestern Australia to Richard Bloomfield, who had Steve Renshaw convert it backto AU panels.

It’s been re-painted in a 00 Motorsport livery mimicking theLowndes ‘green eyed monster’ colours and has been raced this year by Bloomfield(who also races in V8 Utes) in Sports Sedan competition at Barbagallo – but hehas eyes on taking it back to Bathurst for its first endurance race at theMountain.

“We’re doing Sports Sedans in Perth but we’re going to do the 12 Hour inFebruary at Bathurst in the invitational class and we plan to run it in theKumho Series next year,” Bloomfield told the Sleuth this week.

“I started off racing in Formula Ford and went on to theRadicals and bought an SR8 V8. I enjoyed the thrill but it was more of a toy. Iwanted a bit more of a challenge. The AU came along and I didn’t want to letthe opportunity slip.”

Have a car you’d like the V8 Sleuth to chase down? Then drophim a line and see if you can set the Sleuth a new mission.