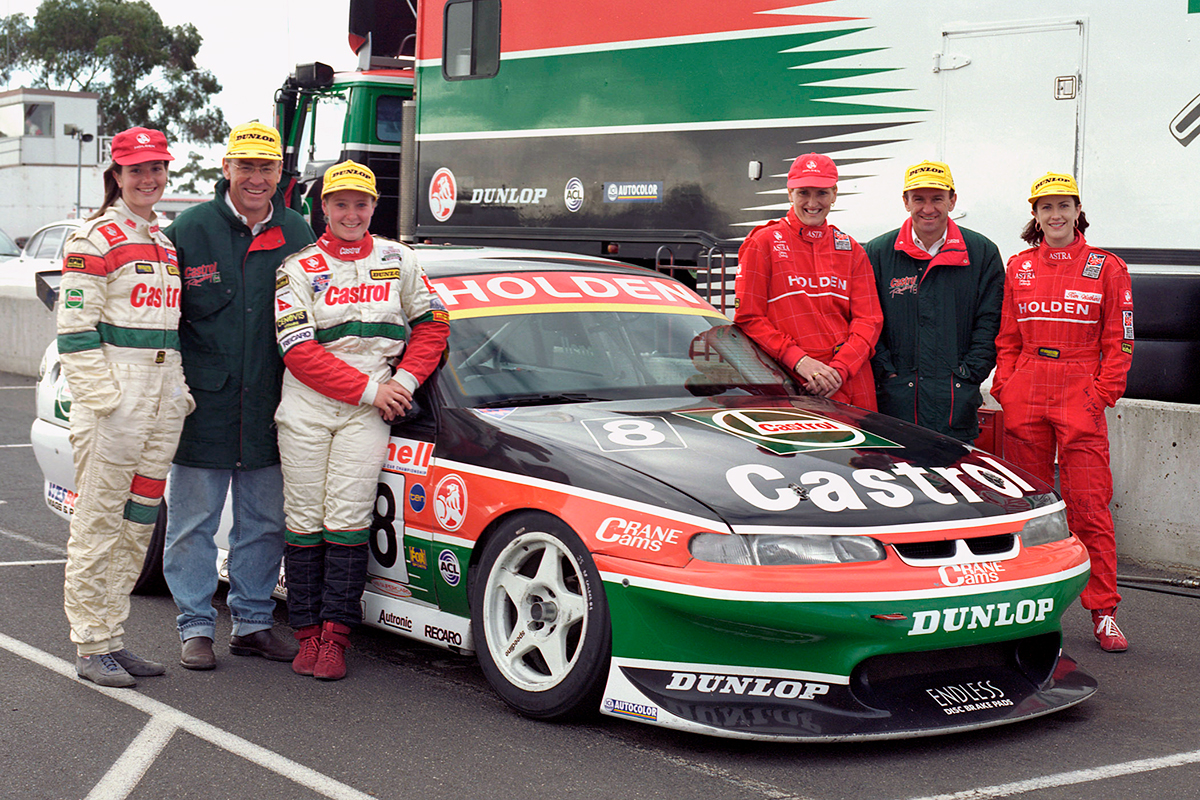 Before Simona De Silvestro and the Harvey Norman Supergirls, there was Melinda Price and the Castrol Cougars; a team spearheaded by Castrol, Holden and Larry Perkins to give an opportunity to rising female racers.

Price and Cougars team-mate Kerryn Brewer still hold the record for the best result by an all-female driver combination in the Bathurst 1000 with an 11th place finish in 1998.

After falling out of love with motorsport, raising a family and beating breast cancer, Price has her sights set on returning to the cockpit after spending this year focusing on attaining a second university degree.

In this edition of Saturday Sleuthing, we caught up with Price during a school run to chat about her time in the sport. 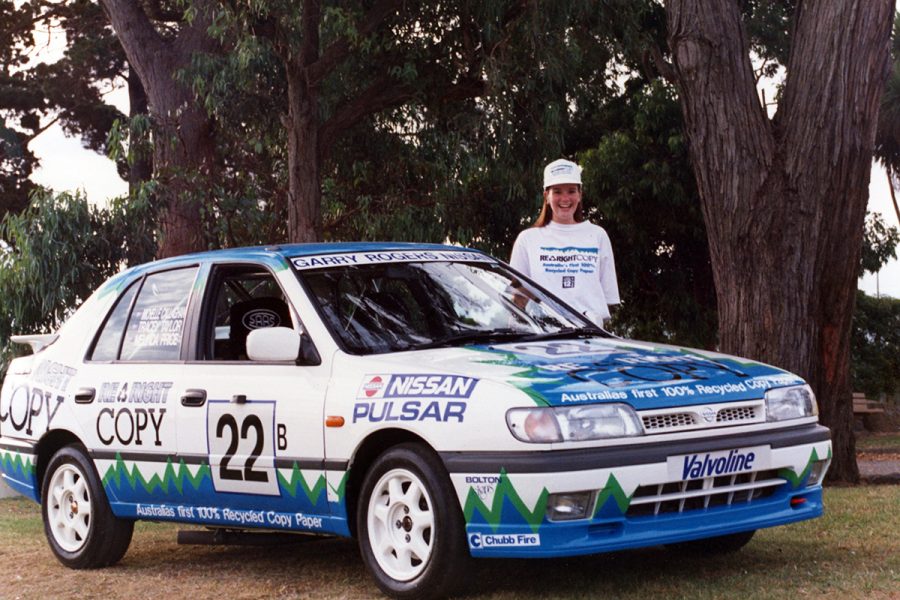 What makes up an average day in the life of Melinda Price in 2018?

Goodness, there’s no such thing! I’ve been going to uni and just finished my naturopathy degree last week, that’s been a big part of my time.

Being a mum, working in the school canteen, doing a bit of pit crewing stuff for Bruce Williams in Touring Car Masters, getting out to the track and smelling the fumes every now and then, I’m doing driver training with Audi... so lots of different things.

When did the motorsport bug first bite for you?

I was just brought up that way, really. I started racing go-karts as soon as I was old enough.

Dad was taking me to the track even before then so I could practice and hit the ground running on my ninth birthday. That was just how I grew up and part of my life as a child.

Then I had 10 years off and got the bug again five or six years ago – I thought I was cured! I moved back to Melbourne and started racing again and found myself thinking ‘how did I not do this for the last 10 years?’ 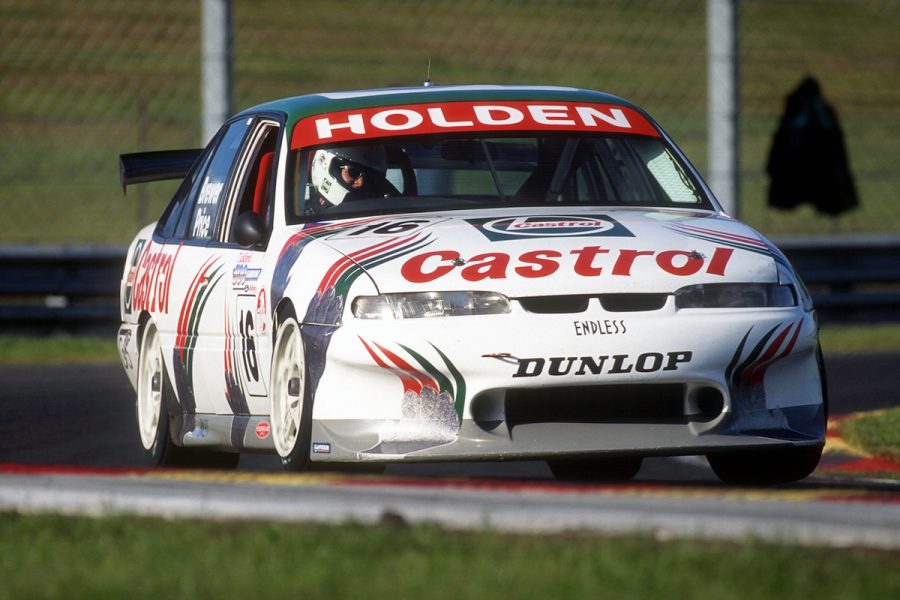 You’re best remembered by Supercars fans as part of the Castrol Cougars squad. How did that all come about?

I’d been racing production cars and a few other things, and got a call out of the blue to say that Holden and Larry Perkins were putting together an all-female team to race in touring cars, and would I like to go to Calder and have a test. I couldn’t get there fast enough – and I got the job!

What was that first drive like behind the wheel of a V8 Supercar?

It was a dream come true for me. I was so excited; obviously a little bit nervous too, but mostly just excited to get the opportunity.

When we were all sitting there and they asked, ‘alright, who wants to go first', well, I just shoved my hand up in the air!

What was it like to race for Perkins Engineering, a team that was at the peak of its powers at that point?

Just being part of the whole touring car show, that was the pinnacle of racing in Australia.

I remember my first Bathurst going to the drivers’ briefing, looking at Peter Brock, Larry and Dick Johnson and thinking ‘I can’t even believe that I’m in the same race as these guys.’ 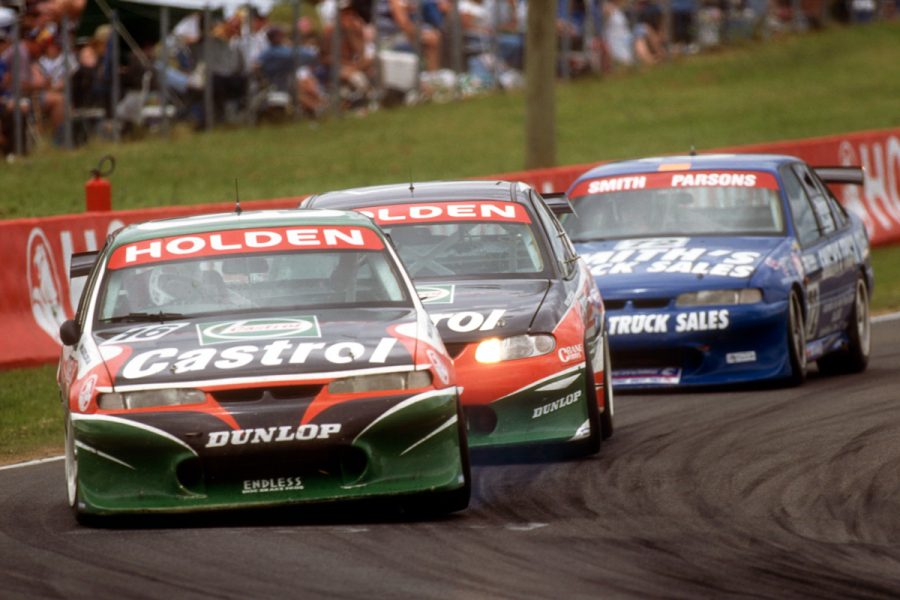 Price and Brewer, here ahead of the lead Perkins/Ingall Castrol Commodore, finished 11th at Bathurst in 1998

Speaking of Larry, have you got any good stories about what it was like driving for him?

He was a hard taskmaster, tough but fair. It upset Kerryn a few times, but my Dad was a bit of a hard taskmaster so I was used to that kind of thing. If you did something wrong you heard all about it, which was fair enough.

What was that first Bathurst like for you and Kerryn in 1997? Was there a lot of pressure?

I don’t think so. It wasn’t like it might have been with Renee Gracie and Simona De Silvestro [as a wildcard entry in 2015]; we weren’t really expected to win the race or whatever.

We were a privateer entry that year, so that took the pressure off. To be honest, as long as we didn’t do anything stupid, had a good race and were reasonably quick, everybody was going to be happy.

When we finished 12th – and at the end of the day, just finishing Bathurst is a huge achievement – I think we exceeded everybody’s expectations, and we were all happy campers because Larry and Russell [Ingall] won. 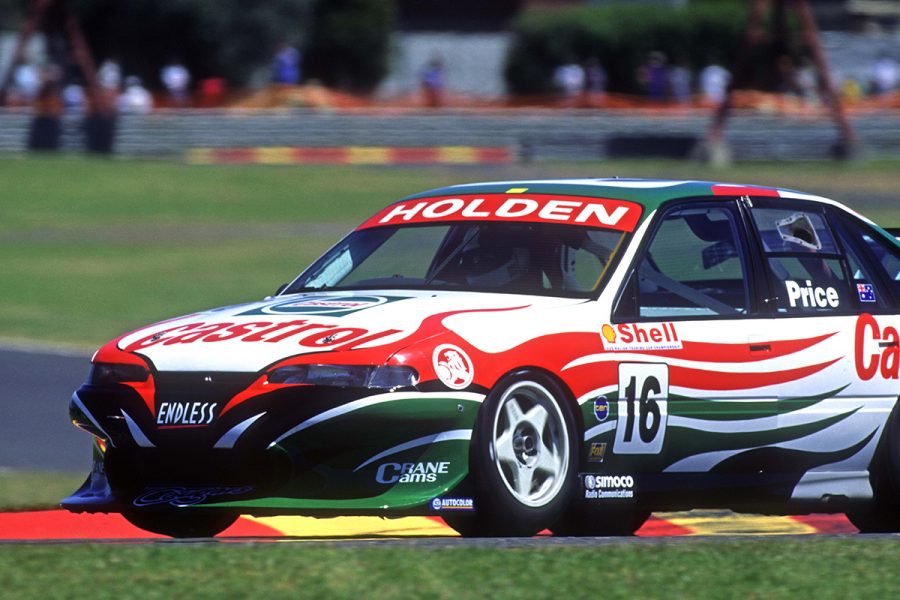 Price in the Sandown sprint round in 1998

How was the fan reaction for you and Kerryn throughout the Cougars program?

It was awesome. I remember the first year when we went down to the signing in the middle of Bathurst. I’d never had a poster with myself on it before!

It was a bit incredible to me that people were standing there with posters of me, asking me to sign them. There wasn’t a woman or a child – and some blokes as well – that walked past our garage who didn’t stop to say how happy they were that there were some girls there.

While everyone remembers the Castrol Cougars, your first Bathurst 1000 start came in a Toyota Corolla Seca in 1994. How did that come about and what do you remember?

To be honest, I struggle to remember back that far! I’d done the Bathurst 12 Hour before that, but the car was crashed before I got to drive it in the race.

It was just incredible to be there. I found an old photo a couple of months ago of Brocky and I in deep discussion at that race meeting.

He was always really supportive. He came down and checked on how I was going, and if he’d seen me out on the track he’d give me a tip about this or that, where I braked or a different line or something. 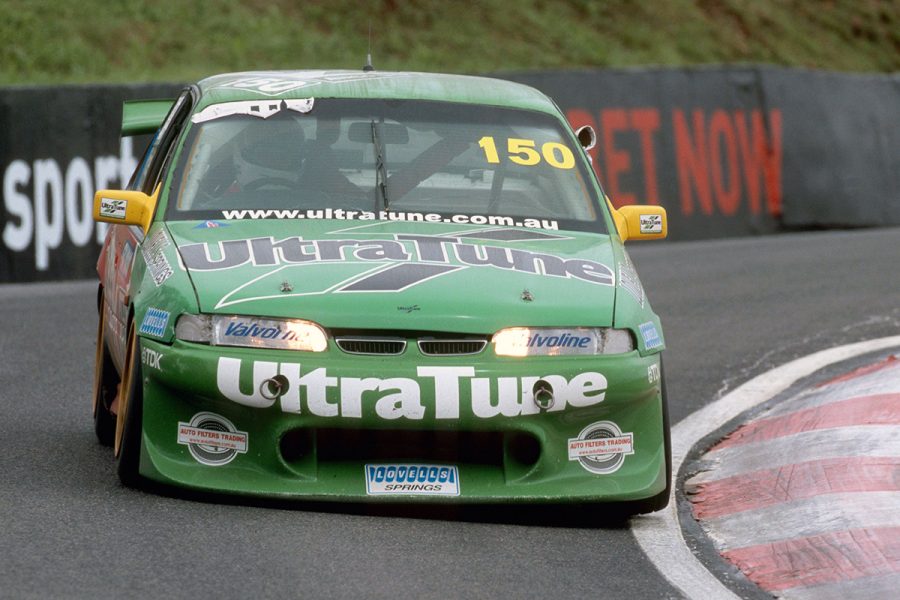 Price and Dean Lindstrom were classified 20th at Bathurst in 2000

After the Cougars finished, you ended up racing for a privateer outfit in an Ultra Tune-backed Commodore. What are your memories of that time?

I was happy and grateful to be racing at Bathurst, but the team wasn’t run in the same way that Larry’s team was obviously, and there were a few things that we didn’t see eye to eye on.

We probably both left feeling a little bit disappointed about things, but we had some good Bathursts and we were there in the end and finished.

Did you make a conscious choice to step away from motorsport?

I felt like I needed to step away from it. At that time, there were perhaps more things that I didn’t enjoy about the sport than I enjoyed.

I’d been racing for a long time and it just got to a stage for me where there were a lot of things about the industry and a few things that happened that left me with a bit of a bad taste in my mouth.

Back then as well, not many drivers were making a living out of racing. I thought that I didn’t want to pop out the other end and be 40 years old and have nothing, and maybe I needed to try doing something else.

I think that was a good break. I hadn’t raced for 10 years or so when Dad said a family friend of ours had a historic Lotus Formula Junior car, and we could run it while the owner was overseas.

That stuck in my head overnight and I thought, ‘well, maybe...’ So off to Winton we went and I fell in love with it all over again.

I started racing in that and one thing led to another, and a few other things came along. Keith Linnell put me in his old Supercheap Auto Ford Falcon EL that I’ve driven in a couple of demonstration races. 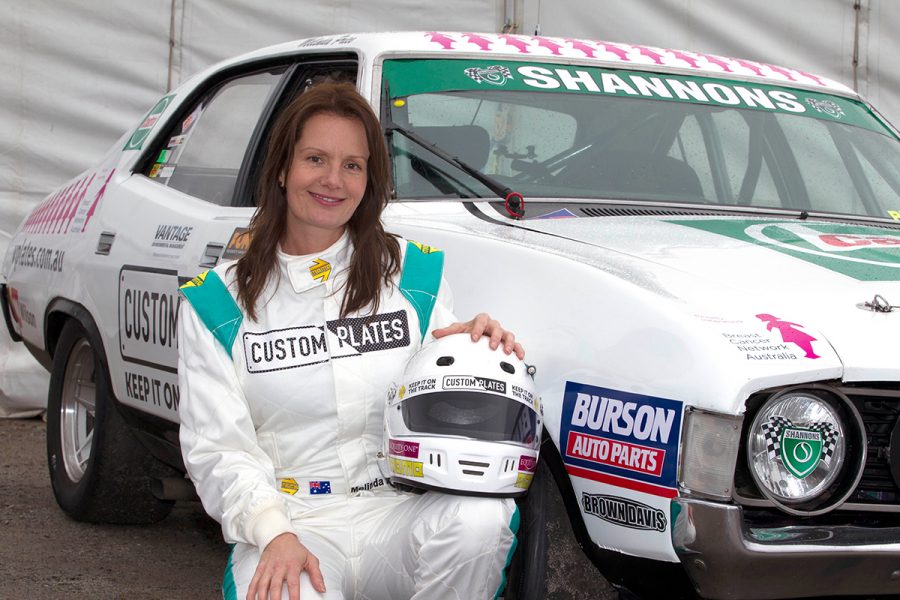 Price with the Falcon she raced in TCM last year

Are you looking at doing more in the future now that you’re getting back into it?

I would love to. I really needed to put this year on hold because I was finishing my degree and it’s a really full-on course, and I just didn’t have the time and energy to try and do both.

Now I have the freedom to head off in whatever direction I please. I’ve had a couple of calls in the last few days actually, and put the vibes out there to say ‘let’s go racing again.’

Finally, what’s your favourite memory from racing in Supercars?

I’ve got a couple, but one of them was my very first Supercars race at Barbagallo.

The weather had been a bit ‘is it raining/is it not raining’ and it ended up being wet for the start – but everyone else was on wets and I was on slicks. It was hopeless, but then it started to dry out.

Larry and John Bowe were coming around in first and second to lap me, but then it really started drying out. Their tyres started going off and I started catching them. They were almost holding me up! For the last couple of laps, in my head I was pretending I was in third place!

My tyres were getting better and theirs worse, until at one point I went roaring up and nearly hit the back of Larry. I thought, ‘oh god, imagine if I took the boss out in my first race’ so I thought I’d better hang back a bit...