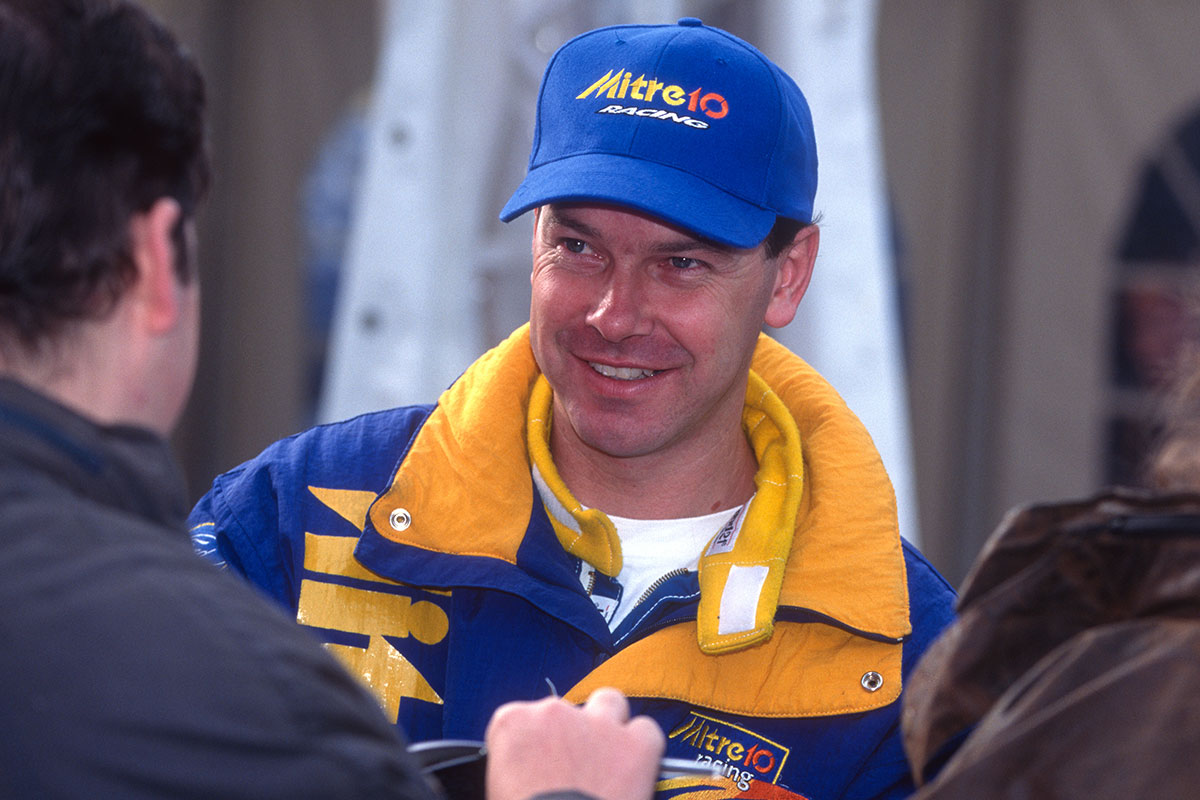 It's easy to forget that the cult hero of Supercars' television coverage was a very talented driver back in the day.

Mark Larkham's path to Supercars included some rapid jumps; he went from having never raced a car to winning Australia's Formula Ford title in less than three years, then leapt into Peter Brock's fire-breathing Ford Sierra.

His early years in the championship were tough, hampered by a car that was an engineering marvel but wasn't quite cut out to be a Supercars contender.

But, as the 1999 Bathurst 1000 polesitter told Saturday Sleuthing, he wouldn't change a thing – even if he had the chance.

Away from a Supercars weekend, what does an average day look like in 2019 for Mark Larkham?

Well, I live on a farm so there's farm work to be done. That's never-ending, whether that's feeding cattle in this drought – although we're down to pretty low numbers now because we've de-stocked, like many.

I also do quite a bit of work for Polaris Industries in the rural sector. You'll see some videos and bits and pieces on their social media space; we make those videos here, so that takes up a bit of the time.

There is also quite a bit of time spent between Supercars weekends researching, preparing and building the stories that you see go to air with Emma, my pit producer, and Aaron from the graphics team that works with Supercars Media. 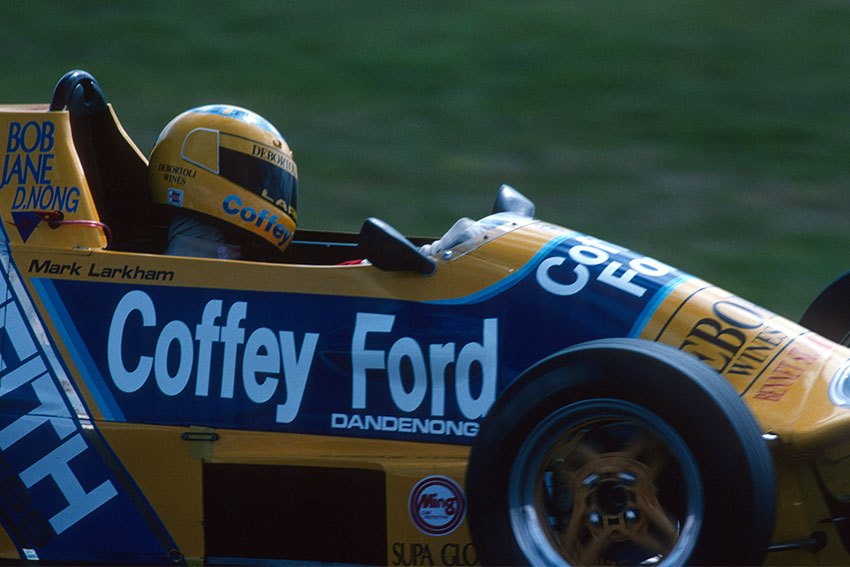 What got you interested in motorsport in the first place?

I lived in a rural community in the Riverina, and grew up paddock-bashing cars around farms. I loved the driving aspect; the concept of having a vehicle in opposite-lock was something that I was dearly attracted to!

Back in 1987 I started looking at ads in the back of Auto Action to see if I could find a little, cheap rally car, but I started seeing these Formula Fords.

I didn't really know much about them, but I thought, for not much more money, I could get myself a proper racecar.

Not knowing if I had any degree of capability or talent to drive a racecar, I went to Sydney to Peter Finlay's Driving School.

My girlfriend – who's now been my wife for many years – had a little 1974 Valiant Galant, and I drove that 600 kays to Oran Park.

It was kind of funny, there were others who were probably much more financially capable than I was in their Datsun 240Zs and BMW 3-series, so I sort of got scorned at a little bit turning up with the Galant. In fact, I think they thought I was taking the piss!

Without boasting and with a degree of humility, I will say that I easily topped the class and got a AA mark – I've still got the report from Peter – and he said I should really go and have a crack at race driving.

That same weekend I bought a cheap Formula Ford and trailer and towed them back to Griffith behind the Valiant; you can imagine, this poor little Galant has driven to Sydney, fanged around Oran Park for two full days, towed a trailer with a Formula Ford on it back to Griffith … it was screwed!

I hadn't done any karting or circuit racing whatsoever but, probably being a bit wet behind the ears, I thought 'what the heck' and entered the Driver to Europe Series round at Winton two weeks after I bought the car.

Back then a typical field was about 42 cars and I finished, I think, 16th in my first race.

I loved it, even though I made a lot of mistakes, had no idea about wheel alignments, or putting the front springs in the rear … did all sorts of weird things, but it was fabulous learning!

I paid Mick Kouros, the gun Formula Ford preparer of the time in Sydney, to tutor me for three days. I learnt how to do wheel alignments, corner weights, springs, anti-roll bars, and how everything worked. It was money well spent.

That coupled to what we were already learning by running the car from Griffith with a couple of mates who, between us, had no circuit racing knowledge whatsoever. We were like sponges, our learning curve was extraordinarily high.

That all culminated in getting an invitation to enter the Formula Ford race at the Formula 1 Australian Grand Prix in Adelaide.

I finished seventh in that old car in the final race of the year. It was a good motivator for me to press on to the next stage. 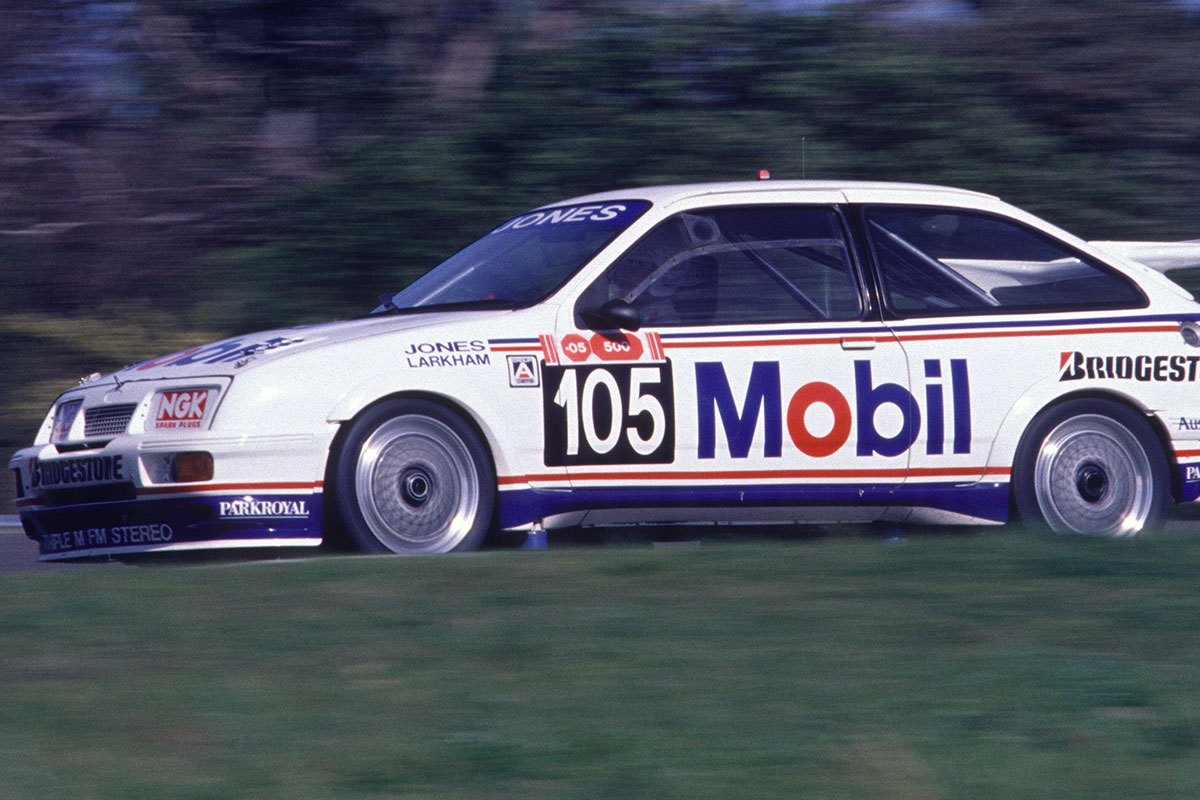 You made your Supercars Championship debut in your Mitre 10 Falcon in the mid-90s, but you’d already raced a touring car for none other than Peter Brock…

Peter was great to me. He'd helped me with some sponsorship stuff and done a little video together.

Andy Rouse couldn't make the Sandown 500, so Peter thought he'd give a young bloke a go. I partnered with Brad Jones in the Mobil Sierra – and wow, what an eye-opener!

I did my first test at Winton, and that was the day that Barry Sheene crashed one of Brock's Sierras. That was sad; I flew back home with Barry that day, he was devastated.

But for me that was a successful day up against some other drivers who were all competing for the seat. 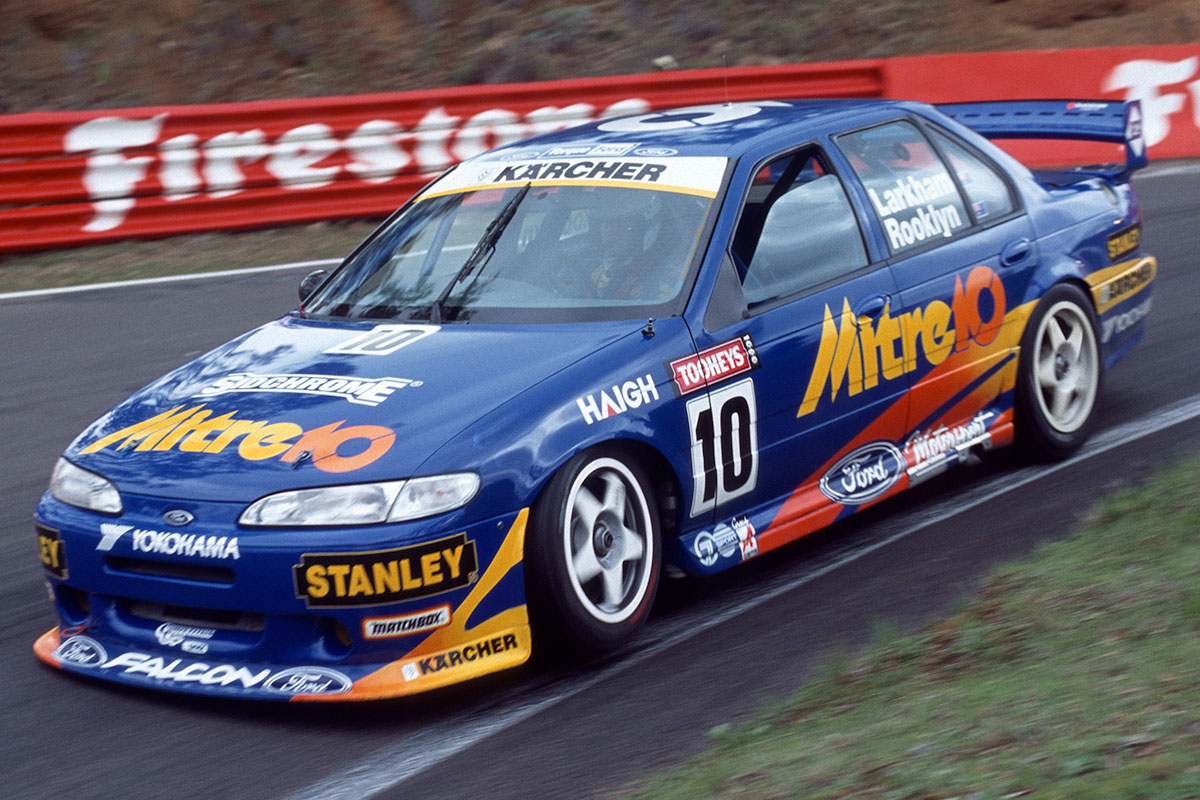 Let’s say a DeLorean pulls up out the front of your place with the time circuits set to late 1994. Knowing what you know now, what do you change on that first Mitre 10 EF Falcon?

It wouldn't have been an EF Falcon; I would've been down at Larry Perkins' workshop knocking on his door seeing if he would sell me a VR Commodore!

I say that, but in many ways I'm glad everything happened the way it did.

It taught me so many valuable life lessons about people, engineering, theory versus practicality, and managing a budget, that I may not otherwise have picked up.

It was no doubt a tough period, but even so we were lucky to land there.

We started from the ground up and built and engineered everything … and this is where the first mistake was made; allowing an engineering team too much of a free reign.

It was my mistake, not theirs. They were only doing what engineers do.

A lot of the stuff that was built on that car was theoretically correct, but in the real world you're bouncing off things like kerbs and Wayne Gardner's Coke Commodore!

There was a degree of practicality that was needed, and we just didn't have it.

That said, there's a lot of things appeared on other cars 10 to 15 years later that we did first on that car. 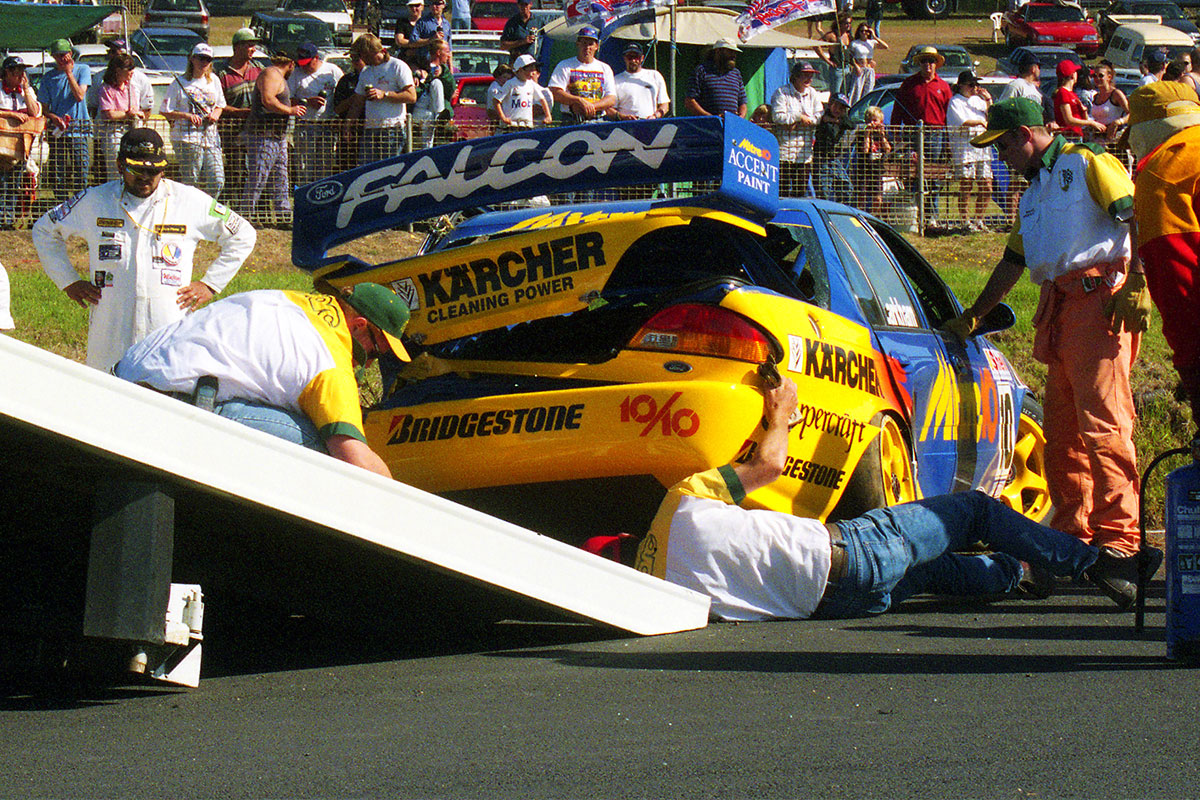 Even once you moved to a Stone Brothers Racing Falcon for 1997 it seemed like luck still wasn't really going your way, but that appeared to turn around in 1997 after you received a Saint Christopher medal … what was the story behind that?

Haha, I don't know if those two things aligned perfectly!

We were just having a bad run of luck. I probably created a couple of accidents myself as part of my desire to push hard and get up the front, but some of the bigger accidents we had we were literally part of something that someone else had caused.

My travel agent Carmel, who had been doing my travel for many years, sent me a Saint Christopher medal.

I'm not a particularly religious person, but he's the patron saint of travel – I call him the saint of planes, trains and automobiles! – so I wore that.

It did coincide with being a bit lucky, so there you go!

That era of 1997 through to 2000 were probably our better years, up until we lost Mitre 10. I don't think we ever really recovered from that. 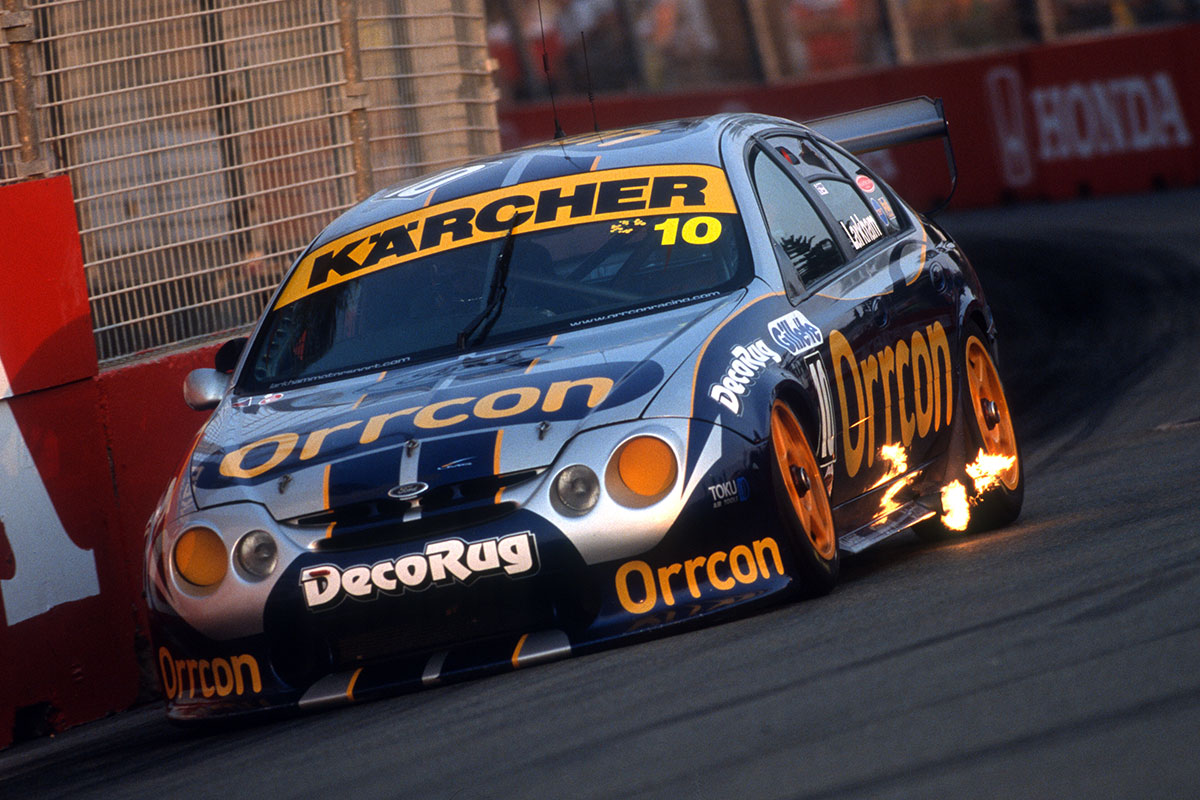 At that peak you were a consistent front-runner – a Bathurst 1000 pole-winner, no less. Were there ever any offers to drive outside of your own team, or offers from Holden to switch to the red side?

Not as a driver. There were discussions with Holden, but Ford was always quite supportive during that period of time.

It's an interesting point, because I often reflect on my career versus others who focused solely on driving, rather than being a driver/team owner.

For me – and I do try to say this modestly – had I chosen just to be a driver I probably would have had a more successful driving career.

But I chose not to do that, and sitting here today I'm so glad that I chose the path that I did.

I've won some races and a championship. I've put some trophies in the cabinet.

When I ultimately sold my team and got out, I'd geared myself pretty well for doing what I do now in the media because, without being an expert at anything, I'd done a little bit of everything.

Going back to that question about the DeLorean and 1994: would I change anything? I probably wouldn't. 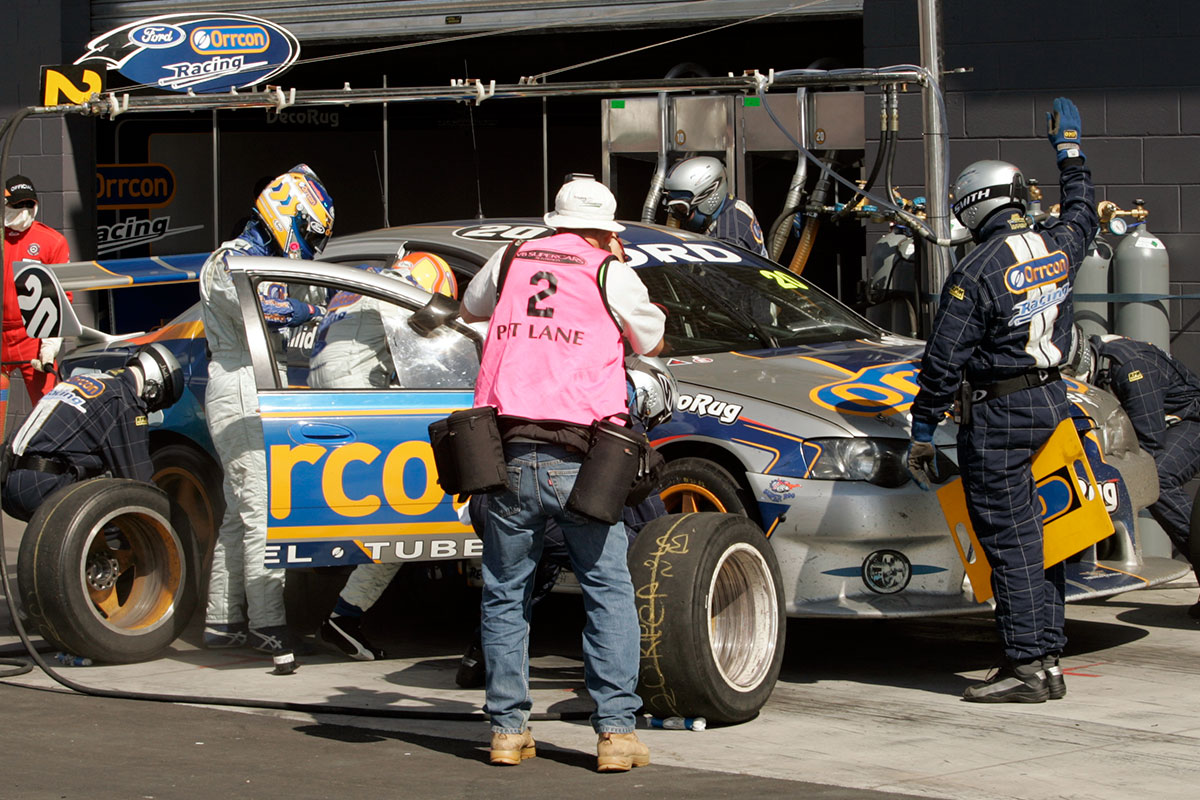 You're good at the TV stuff and the fans love you … do you enjoy it?

I wouldn't say I'm particularly good at it … but yes, I enjoy it. I love it.

I think that equips me well to talk to an audience about a really technical sport in terms that I hope that they can understand.

In our game there's a lot of assumed knowledge and we trot out a lot of terms – tyre deg, brake knock-off, dual springs, double stacking, etc.

I'm blessed because I'm given the time and opportunity to break that stuff down in terms I think people understand. I don't know why but I like explaining that stuff in simpler terms.

I've played rugby league, AFL, and tennis, and when I watch those sports now I wish sometimes they'd just stop and tell me what a 40/20 is, or what a line-break is again, whatever the term might be. There's a lot of assumed knowledge there.

Our sport is incredibly complex; we've got an Operations Manual that is hundreds of pages thick and it changes every year. 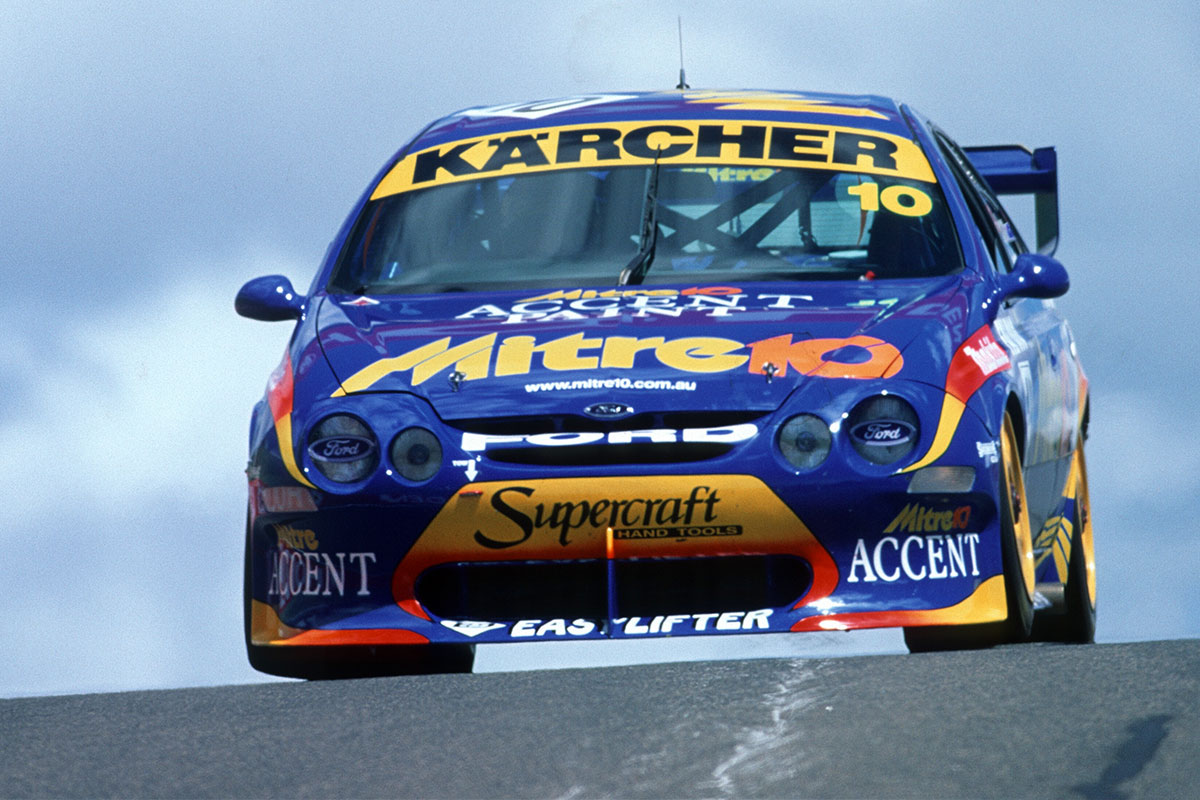 I'd have to go back to the Bathurst pole position.

It was nice winning a couple of races in Supercars, but growing up as a kid Hardie's Heroes was such an iconic event in itself, the ability to prove yourself as a driver with one lap at the toughest track.

But the highlight was not the lap, it was the overwhelming reaction from my peers in pit lane as I drove back down it after I completed the lap. They all came out onto the apron and applauded it.

It was an incredibly humbling moment. I think any of us in life wants to be acknowledged by our peers, and that group of people were so skilled at what they did.

That was probably the thing in my racing career that's stuck with me the most as my fondest memory.

14/11/2019
Stay In The Know
Sign up to the Virgin Australia Supercars Championship Newsletter
We use cookies to ensure that we give you the best experience on our website. If you continue to use this site we will assume that you are happy with it.Ok