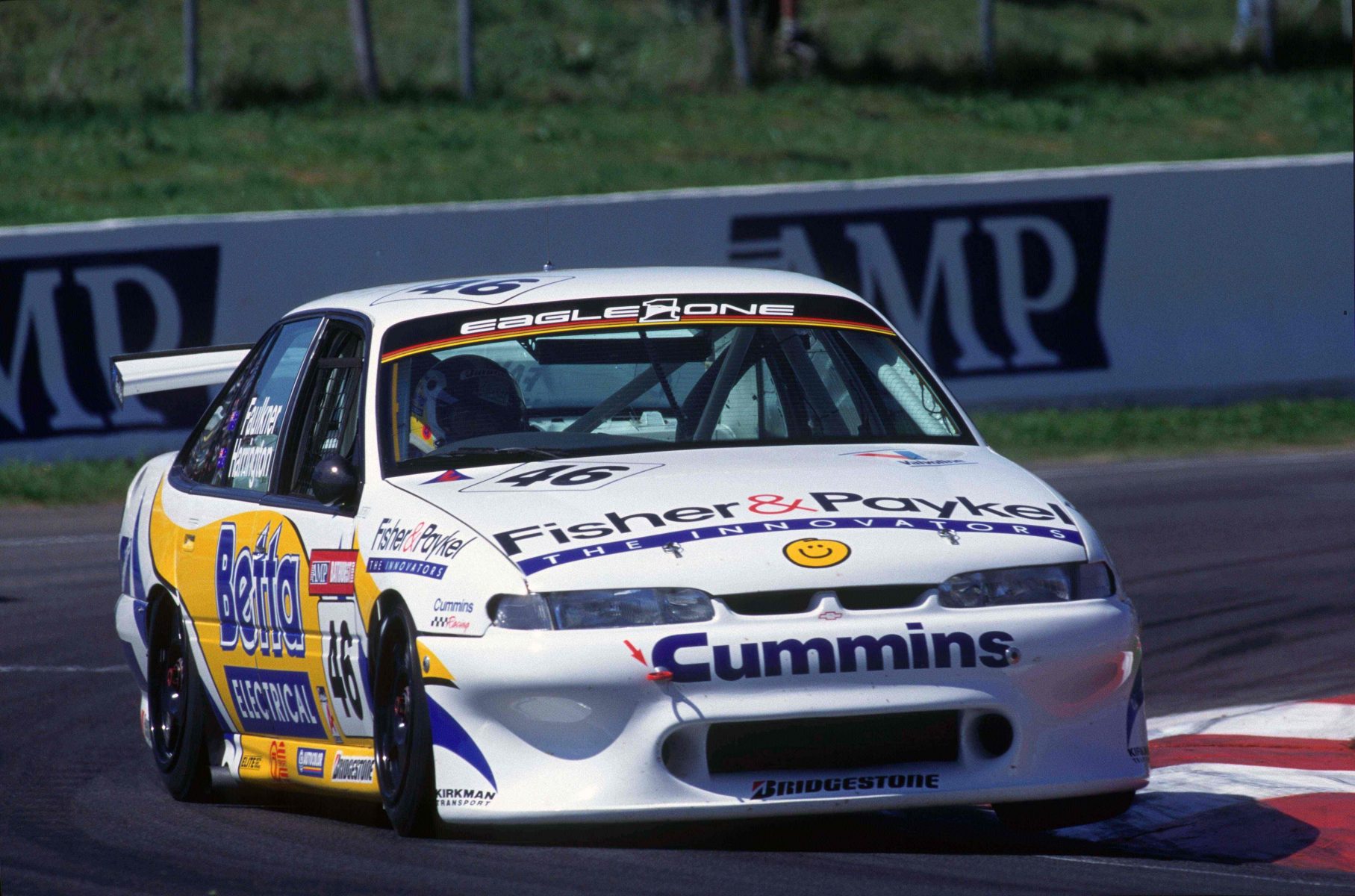 John Faulkner exemplified what was possible at a point of rapid change in the history of Supercars racing.

His small, smart operation achieved good results on a modest budget against the top teams of the era, while also giving a couple of future Bathurst 1000 winners their first drives.

A diverse career led him through a variety of machinery, from karts, Escorts, Capris and Corollas, to big V8 AUSCARs and NASCARs and a seven-year span in Supercars.

His days as a team owner ended amid the collapse of the Tom Walkinshaw Racing empire but he walked away from the cockpit with a 10th-place finish in his final Supercars race in 2005.

In this edition of Saturday Sleuthing we caught up with Faulkner to discuss his time in the sport. 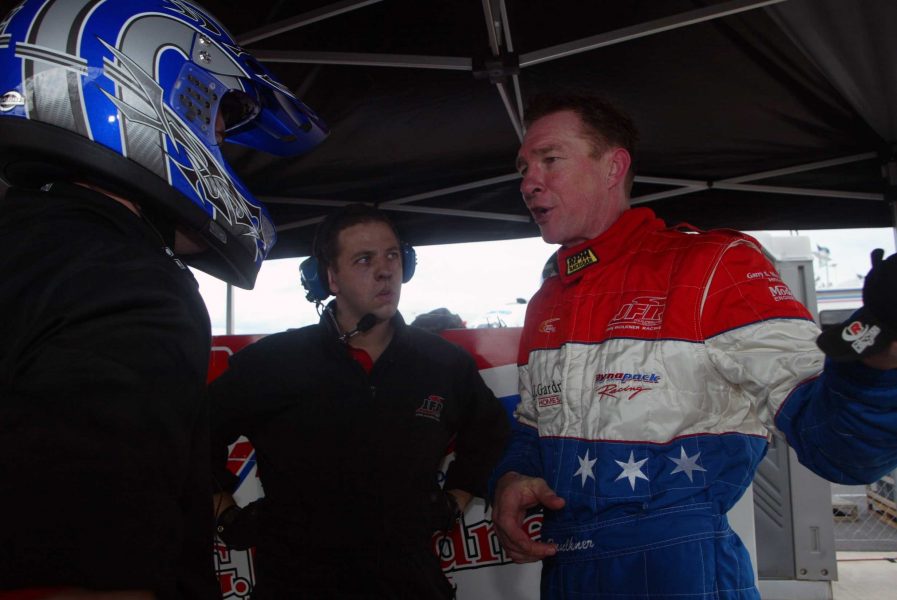 Faulkner at Queensland Raceway in 2002

What makes up a day in the life of John Faulkner in 2018?

Since I stopped racing I developed a camera that marlin fishers use, TOWCAM, for live views from underwater. That sells around the world; it’s quite a unique item.

I made it with a lot of help with Paul Ceprnich and Paul Morris’s race team using their rapid prototyper. Otherwise, I’m generally just fishing and trying to help out where I can. I’m still an avid watcher of Supercars.

People might best remember you from the Betta Electrical Holden days, but your history in touring car racing dates back to the late 1970s. How did it all start for you?

I got my CAMS licence in 1977. I’d done a lot of club racing, hillclimbs and sprints and decided to go the CAMS way. It was the only way I was going to get to Bathurst.

Our first race was a long distance race at Phillip Island, we ran a Capri with Garry Dumbrell, Paul Dumbrell’s dad. I ran with him for a few years and built all the cars. A modest budget, one rung up from club level, but it was good. 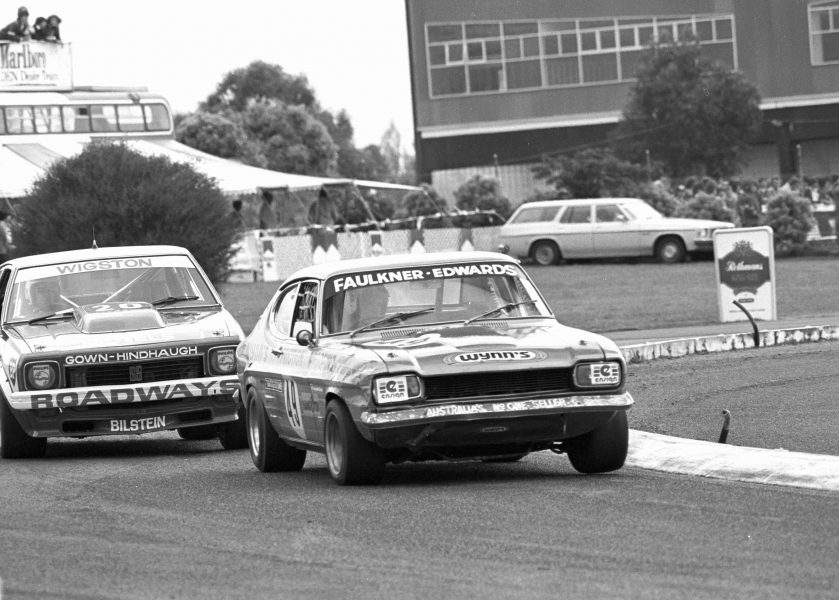 You then popped up in the mid-1980s with Toyota Team Australia in a succession of Corollas, how did that come about?

When I realised we weren’t going to achieve much running small touring cars – there was just no recognition and very little TV – I got all disgruntled with it, sold everything I had and went go-karting.

I met Drew Price and had a full-on attack at professional karting, running here and overseas.

Through that association, I got a call-up from Tony Niovanni at Toyota Racing Australia to have a bit of a test. It was good; we were paid to drive, incentives to win, company car … it was steady, easy and very competitive. 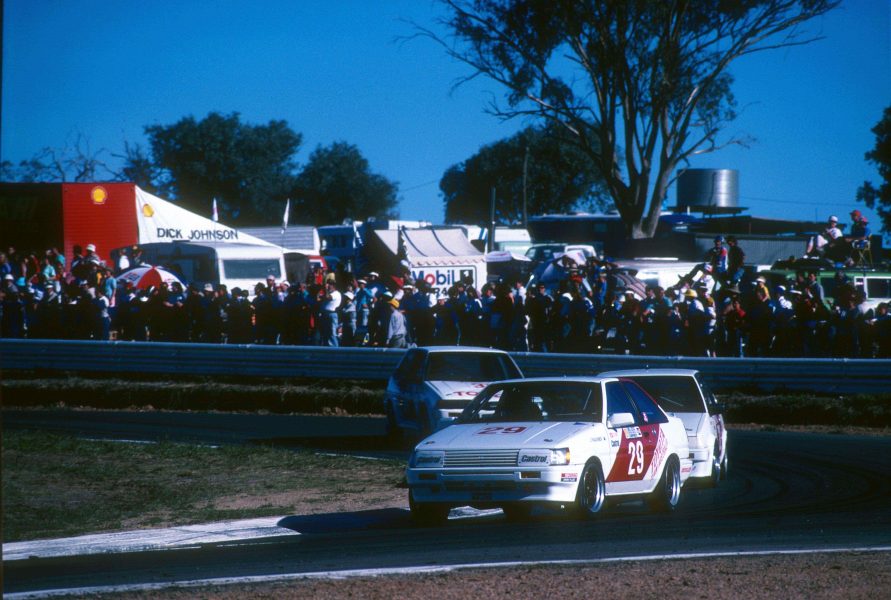 The next place you bobbed up was at the Thunderdome, what was the story there?

I was friendly with Steve Harrington through karting and Les Small, who was building AUSCARs. I wandered up to their workshop and looked at the process. They were $20,000 cars to build new, and you could win $20,000 in one race!

I’d actually done a million laps on the Thunderdome – we did a 24-hour world record attempt in the Corollas – but my first lap in an AUSCAR … it was just next-level racing.

I leased a car off Harrington, charged into the field and said I was going to win the race. I tried to pass Brad Jones, made it, and then I crashed! That ended that car.

Through Toyota I’d managed to befriend some Fisher & Paykel and Betta Electrical people that were keen to get into this category. It was competing heavily against touring cars at the time, with good TV and good crowds. 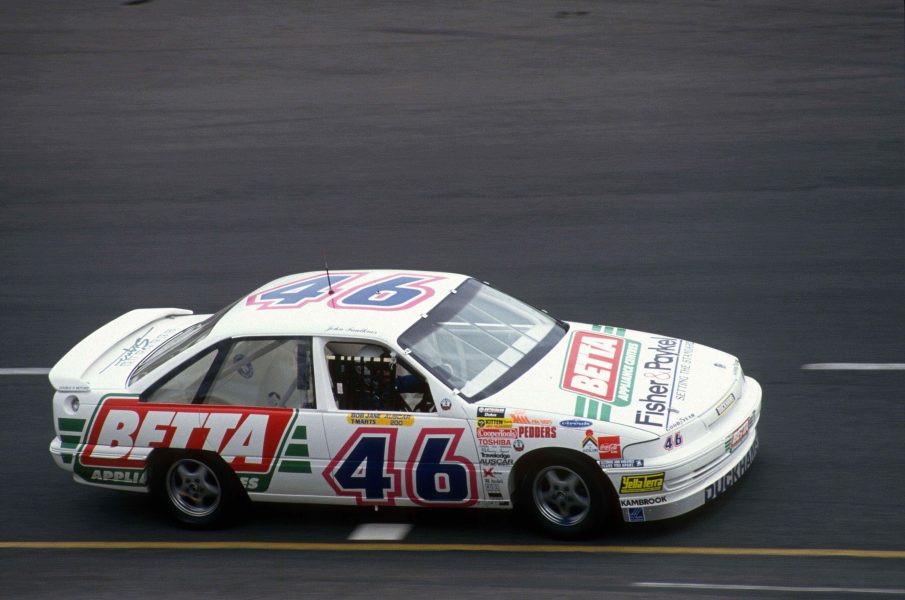 What prompted the move to Supercars for 1996?

We were out at Thunderdome one day and there was the Holden Racing Team with Jeff Grech and Craig Lowndes doing standing start tests. We were running the NASCAR and got chatting.

Next thing, my sponsors were chatting with HRT. That night over dinner I was told ‘HRT has a car for sale, why don’t we just move into Supercars?’

It looked like in those days you could achieve good results if you had a good driver, smart crew and a reasonable budget.

You’d get by with three or four mates, a trailer and a good car at most touring car rounds. We had a lot of help from HRT, we were always up there for coffee or down at our shop.

We didn’t have to reinvent the wheel; we just got the advice, a lot of setup sheets for different tracks and a lot of backdoor help.

We were lucky to achieve a Bridgestone arrangement back in those early days, and they were the tyre. They were unbelievably good.

We didn’t quite get the full-package Bridgestones, so we were sometimes right up the front and sometimes nowhere.

But if you had a good car and you understood it, knew how to finish and didn’t bang wheels with anyone, you could get a good result. 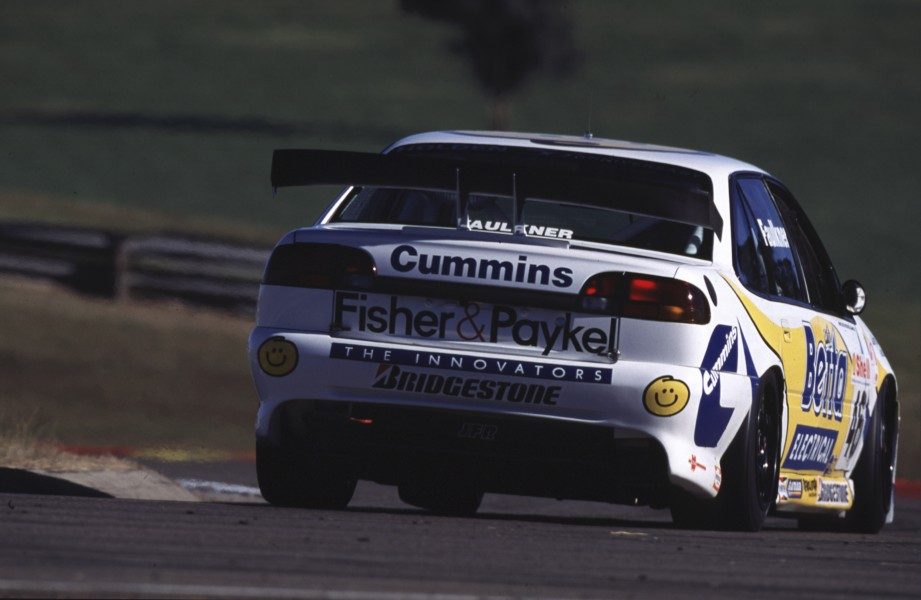 They were just super-quick guys that needed a break. We didn’t have the big bucks, but always had new tyres and reasonably good engines. But they were all built internally at John Faulkner Racing, and that was probably our Achilles’ Heel.

We never really went outside our little shop to find more performance.

In 2000 we got Asia Online, a $1.2-1.5 million-dollar sponsorship deal for a couple of years. We thought that was going to march us higher up, but that sponsor went downhill pretty quick. They ran out of money and left us short for the season.

I just got sick of driving and trying to find money, and worrying about whether a coffee cup had been left on the table in the truck … I was just too involved in running the team to try and competitively drive.

I actually missed a race because I couldn’t find my helmet and couldn’t get out of pit lane! I was stressing about other things.

Then when we got burnt by not turning up to the Queensland round (in 2003) and Supercars fined us $300,000. That just exhausted any good thoughts I had about driving. That was it for me. I was out. 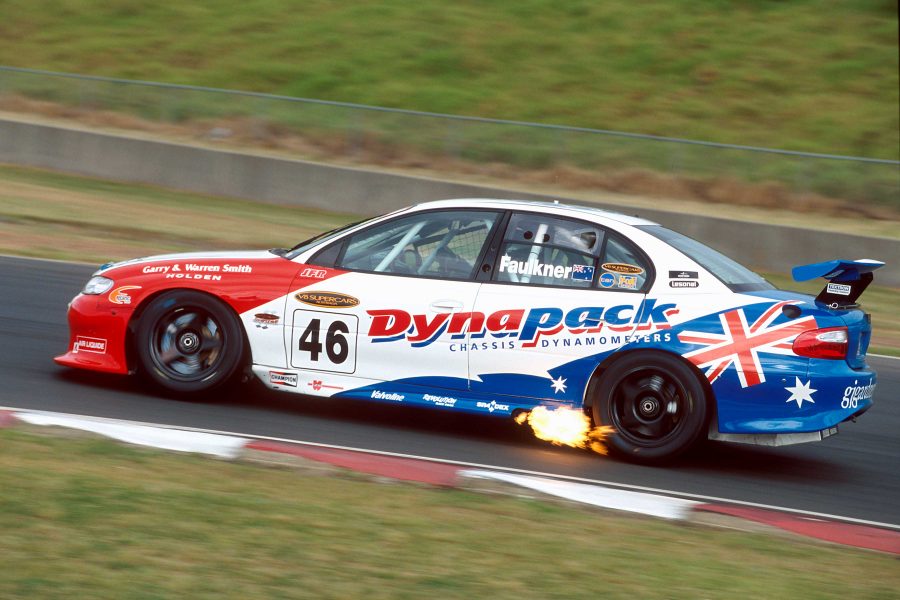 It looked like the Holden Young Lions thing would be the start of a new chapter in your career, but it all wrapped up after two years. What happened?

There was a deal to get JFR’s franchise with HRT (TWR), plus collaboration from Team Brock. It was a very complex and complicated arrangement that AVESCO saw through and made their mission to make sure it didn’t happen, but it did.

The reward for that was that I could run away to Queensland with Young Lions logos and a queue of drivers – Michael Caruso, Tony D’Alberto, Alan Gurr – but the promises of an engine, chassis and components supply never eventuated.

We were always up the front but the domination that I wanted just wasn’t there, and the stress of the Supercars franchise fine was too heavy a blow to recover from.

I moved the cars on to Paul Morris; I continued on as a mentor to some of the drivers, and that worked fine. I have good memories of the Young Lions. It’s not all doom and gloom.

You did a couple of enduro co-drives and finished 10th with Alan Gurr in your last Bathurst 1000 in 2005. Why was that your last Supercars race?

Half a dozen of us, we’d all been put a lap down by the Safety Car. They just picked up the wrong leader and dudded six competitive cars. We argued over that spot right until the last lap.

I was double-stinting and I ran out of water. I just thought, no, I can’t do another one of them, not at that level. 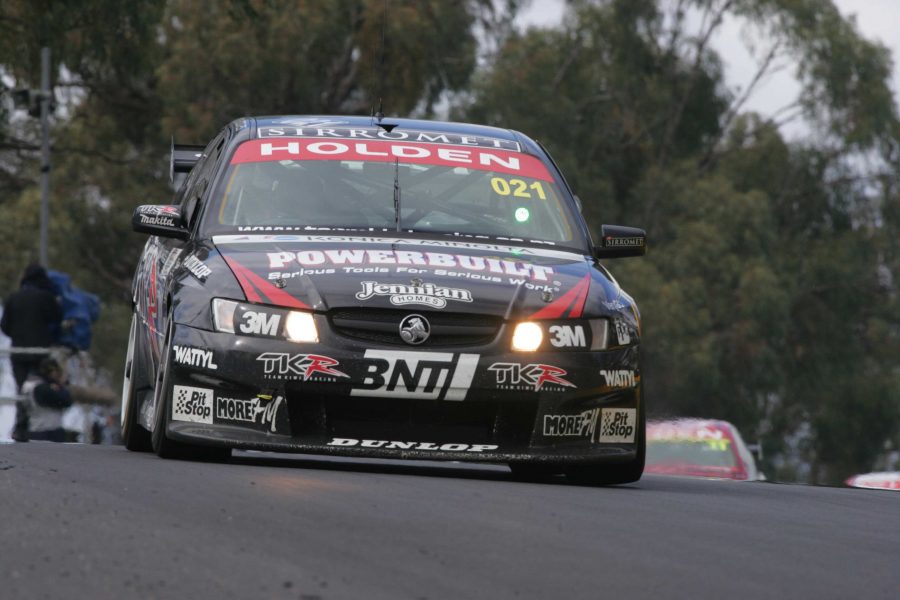 What do you look back on as the personal highlight of your career?

It would have to be Bathurst 1996, making the Top 10 Shootout back when privateers didn’t make the top 10.

To be honest, I put a lot on the line that day. I took a deep breath and had a big crack. I thought this was going to be my one chance.

We ran strong, went from 10th to sixth, and everyone’s gone: ‘who’s this bloke?’

I remember driving the wrong way down pit lane for the TV interview after the lap, as you did back then, and everyone was clapping, the whole crew were out the front of the garage clapping.