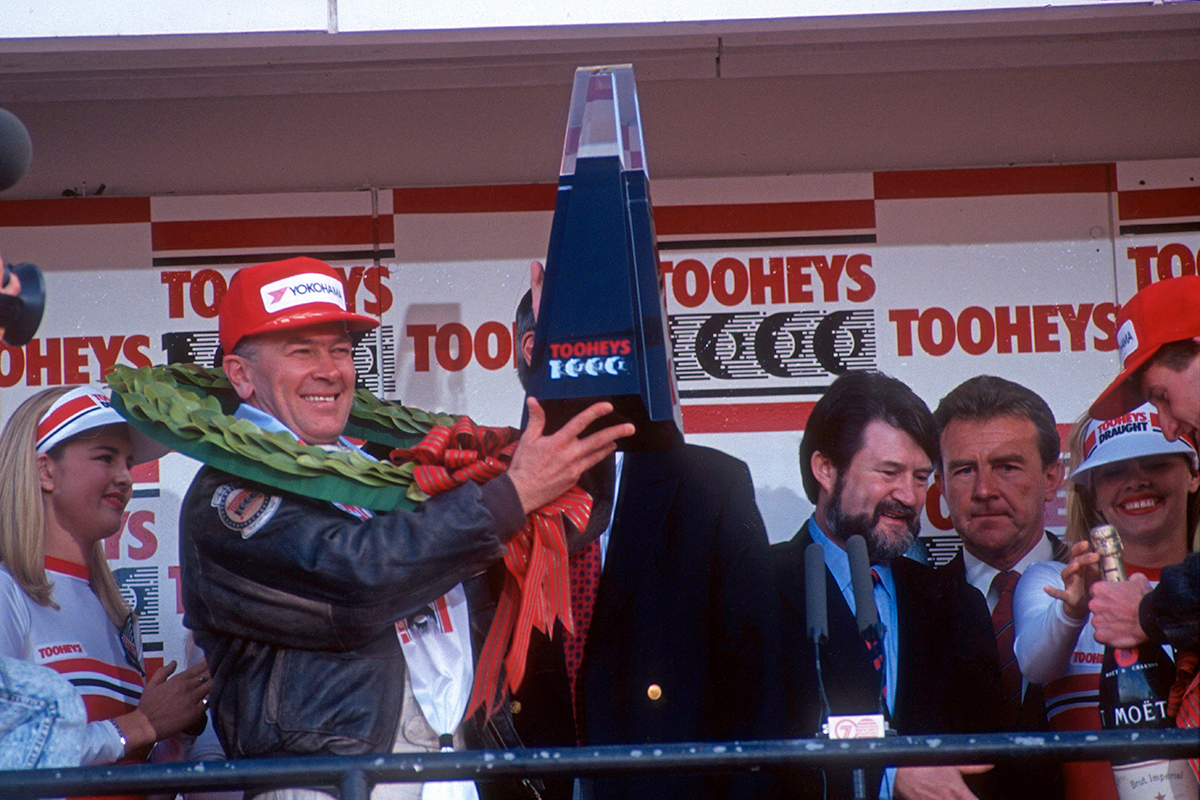 There isn't much that Jim Richards hasn't done in his Hall of Fame racing career.

A full description of his achievements would take up this whole column, so here are the bullet points: seven Bathurst 1000 victories, four Australian Touring Car Championship titles, race wins across multiple ATCC eras, race wins and titles across a broad variety of machinery and one extremely spicy Mount Panorama podium speech.

New Zealand's 'Gentleman Jim' has left an impression on Australian motor racing like few others and continues to be a revered – and active – ambassador of the sport.

The 71-year-old was down at his Melbourne workshop when Saturday Sleuthing caught up with him; although he won't be racing in Touring Car Masters this year, that doesn't mean he'll be any less busy... 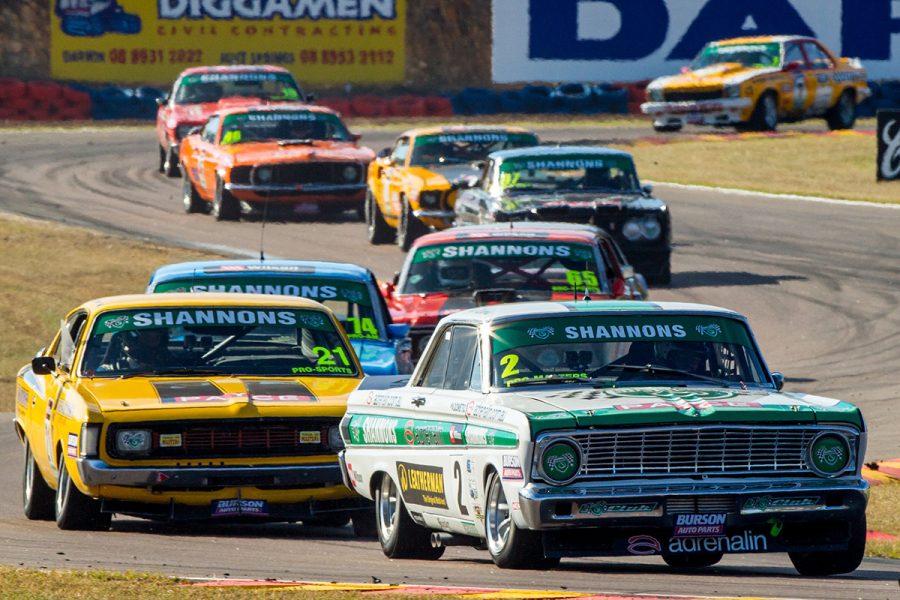 What makes up an average day in the life of Jim Richards in 2019?

I'm usually down the workshop six days a week, usually by nine o'clock. Not because I have to be here, it's just that I enjoy being here.

I look at some emails, see what's happening on the websites, then just tinker around and make sure all the cars are looking pristine.

I've got a bit of work to do on the [TCM] Javelin and a little bit on the Falcon (above) seeing as they're retired now. I've got enough cars to keep me interested and busy, put it that way!

Scaling down a bit has been fantastic. I don't miss what I've been doing – that's in the past.

I'm still going to be doing a little bit of racing and some ride days. I'm still flat out. I'm probably busier than what I was this time last year! 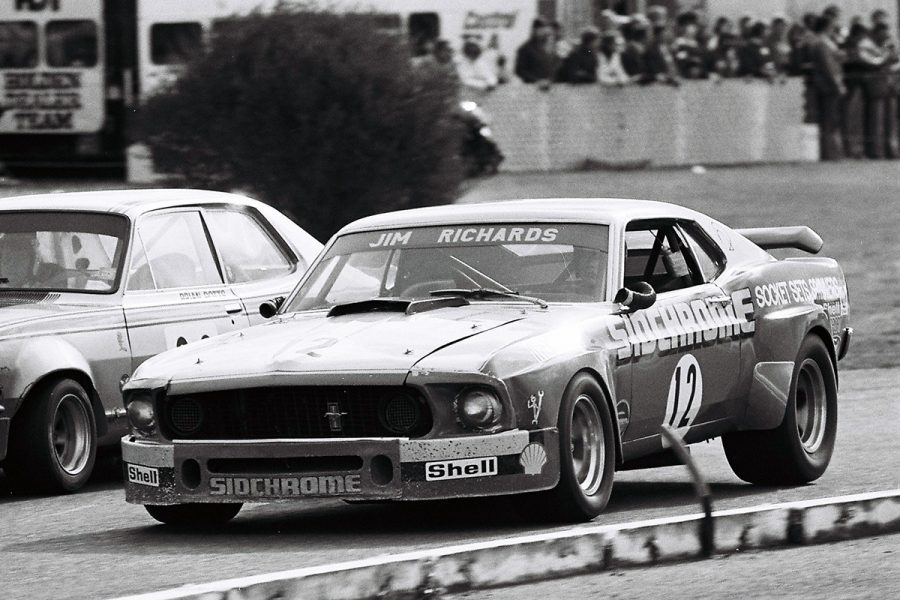 Richards at Sandown early in his 'Australian career'

In your early days of racing in New Zealand, was there ever a plan of where you wanted to end up?

No. Even when I started racing a little Ford Anglia in about 1966, I never thought I'd ever win a race.

I was in a class that had all sorts of cars up to six litres in engine capacity; there were Mustangs, Camaros, Dodges... you name it, they were all in there.

My first race, I think I came last! I had no ambitions at all at doing what I ended up doing because I just didn't think it was possible.

But I enjoyed driving my car and I drove it as hard as I could, and eventually started to get a few firsts, seconds and thirds in local hillclimbs and stuff, and then moved onto the circuits.

I never got a race win until I became friends with a chap by the name of Jim Carney, who came from England and was working for the Shell Oil Company helping build and design the oil refinery at Marsden Point.

He moved up to a twin-cam Ford Escort, and he couldn't beat me in my 1300cc Escort.

He figured that was as good as he was going to get and told me: "Look, I'll have more fun watching you drive my car than I'm having today!"

As soon as I started driving that, we won races. He was absolutely rapt, I was really happy, and we went on for probably four to five years.

Then things changed slightly and we decided to have a crack at Australia.

In between then and the early days lots of different little things happened.

I would drive three cars at any one meeting, such things as a Hillman Imp, the Ford Escort twin-cam, and a 350 Holden Monaro, all in different classes. And I raced production cars at the stock cars on Saturday nights.

Basically, I did anything I could to race and drive cars. Absolutely loved it – like I still do. 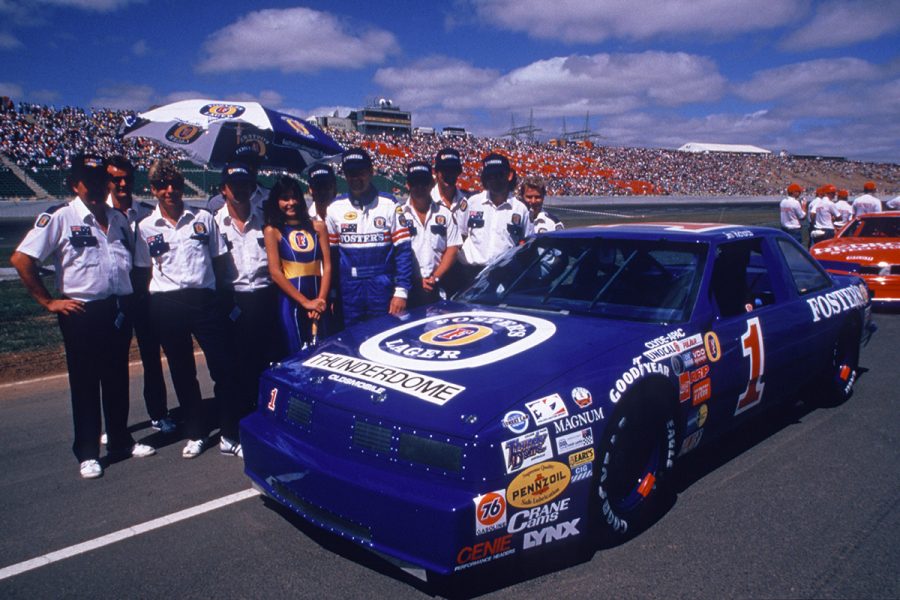 Richards at the Calder Park Thunderdome in 1988

That kind of diversity played a role throughout your whole career. You had a broader career than most when it came to the different types of car you raced: touring cars, Sports Sedans, NASCAR, AUSCAR, trucks... outside of touring cars, what did you most enjoy driving?

I always enjoyed touring cars and Sports Sedans – or all-comers as they were in New Zealand.

I didn't really have the opportunity or the inclination to drive single-seaters; I just thought touring cars were better.

I raced in international and national rallies, I raced speedway, stock car racing, hillclimbs, sprints, grass tracks – you name it, I did it.

I don't think anyone would've driven as many variations of car as what I did because it's not the done thing now. You go from Formula Ford straight to Super2, then Supercars. 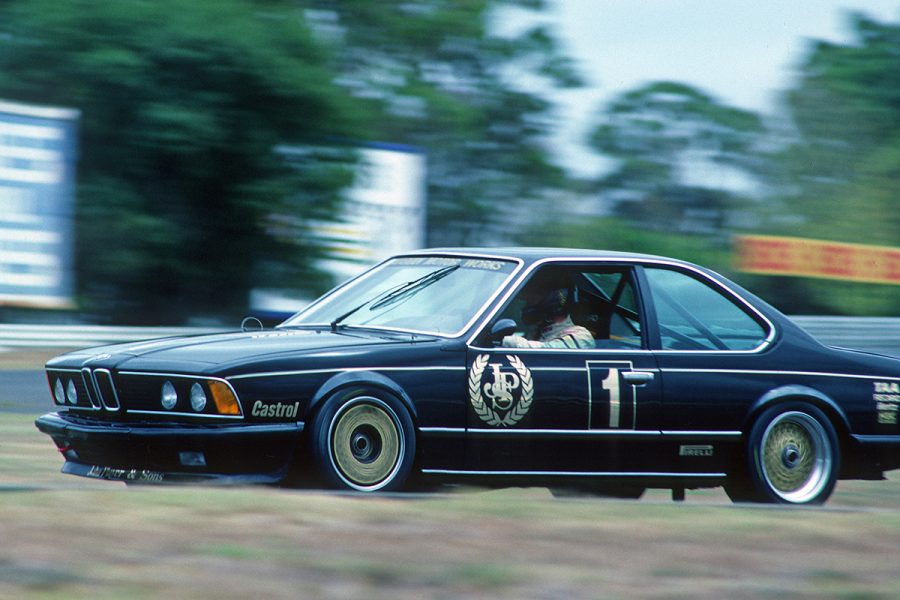 Richards in the legendary JPS BMW at Sandown in 1986

You raced across very different periods of touring car racing in Australia, from Group C, through Group A and into the V8 Supercars era. Which period of cars were your favourite?

I would have to say the Group A era. The cars I had in those days were the best cars to have, and I drove for the best teams – so that was a good start! I won a lot of races and championships.

That for me was the time that I enjoyed most, apart from going to Bathurst each year with Steve [Richards].

We came second one year, and had a really good shot at winning it another year (2004) – and then a kangaroo jumped on top of the car and put us out! 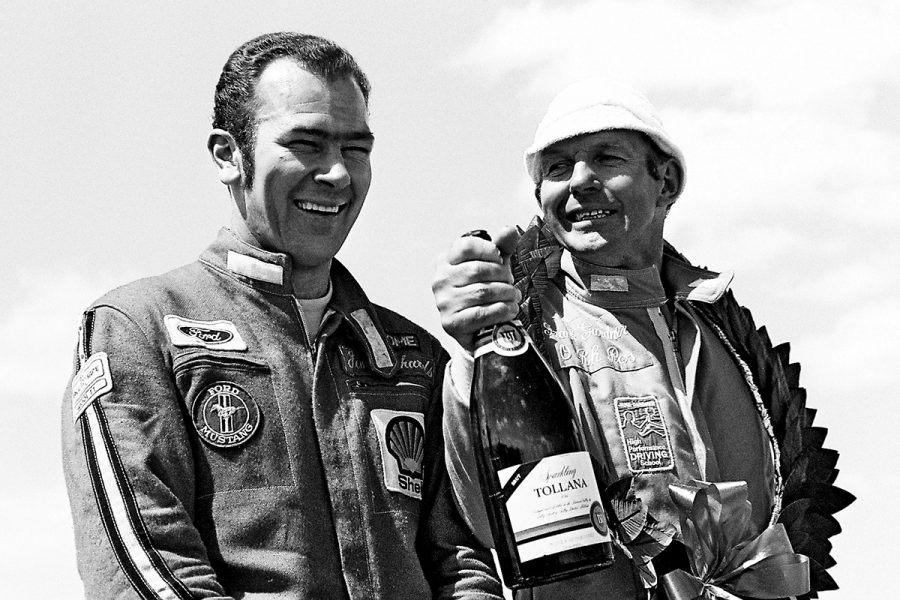 Richards and Gardner before their BMW association

Your time with Frank Gardner’s JPS BMW Team was a very good period for you, a relationship that netted race wins and a couple of touring car titles. What was Frank like to drive for?

Frank was fantastic. I used to compete against him when I first came over; he'd retired from racing in Europe and come back to Australia, and I raced against him in the Sports Sedan series.

We became friends – we didn't visit each other's houses or anything, but we became friends at the racetrack – and then down the line he got the BMW team established and asked me if I'd drive for him.

We never had a bad word between us. Frank used to do all the testing of the cars. When one race meeting finished, he'd go home and start developing different aspects of the car for the next race.

I'd just arrive at a race on the Friday and practice, qualify and race the car. I never, ever drove the car where it wasn't better than the last time I'd driven it. 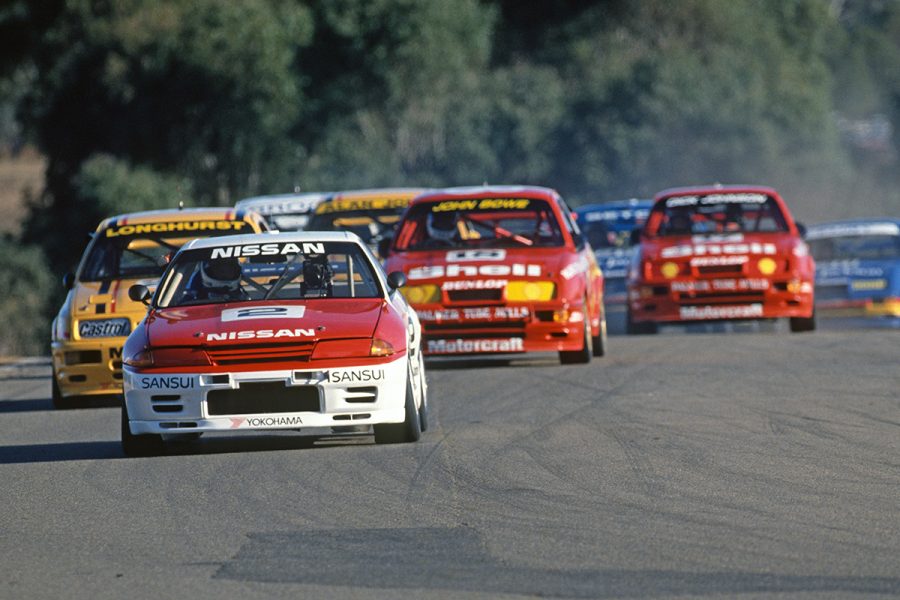 Another car you're closely associated with is the Nissan Skyline GT-R. What was Godzilla like the first time you drove it?

Funnily enough, the first time I drove it, it wasn't very good!

We first ran it at Mallala – Mark Skaife was the guinea pig and I was going to take it over when it was right because I was battling for the championship.

Skaifey led the race for quite a way but then it broke a hub; if I'd driven the car and it had done that, I wouldn't have won the Australian Touring Car Championship in 1990, so it was good thinking by Freddie (Gibson, team boss).

The first time I raced it was at Wanneroo. It had quite a few little bugbears in it because it was only the second time it had run in a race. We finished fourth, but at least it kept us up there.

Then at Oran Park (above), we'd ironed out a few more of the little problems with it, and we won the race and the championship. 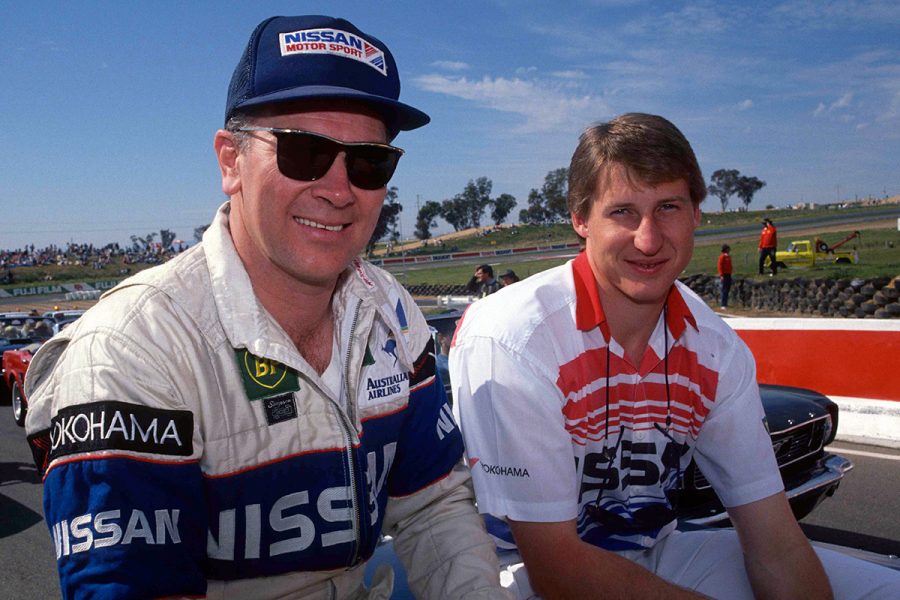 Richards and Skaife at Bathurst in 1989

As your career went on, you had the opportunity to work with a few rising stars: Tony Longhurst, Mark Skaife, your son Steven. Did you enjoy that mentor role? Were you pretty much an open book with those guys?

Yeah, hell yeah. If I was driving for a team – like when Skaifey and I were in a team, for instance – if I couldn't win, I'd rather Skaifey won than anyone else.

A lot of the guys nowadays, if they don't win they'd rather someone else won because they don't want their team-mate to get on top of them!

I was happy in my own ability and I wasn’t doing anything that someone else couldn't do. I mean, I was just driving a car.

As you get older with more responsibilities you probably don't realise that you've slowed down a fraction, but I was still ultra-competitive.

Skaifey was driving the cars all the time, and I would tell him everything I was doing. We'd discuss the data together – although I didn't have a lot of input into the data because I couldn't be bothered to be honest! 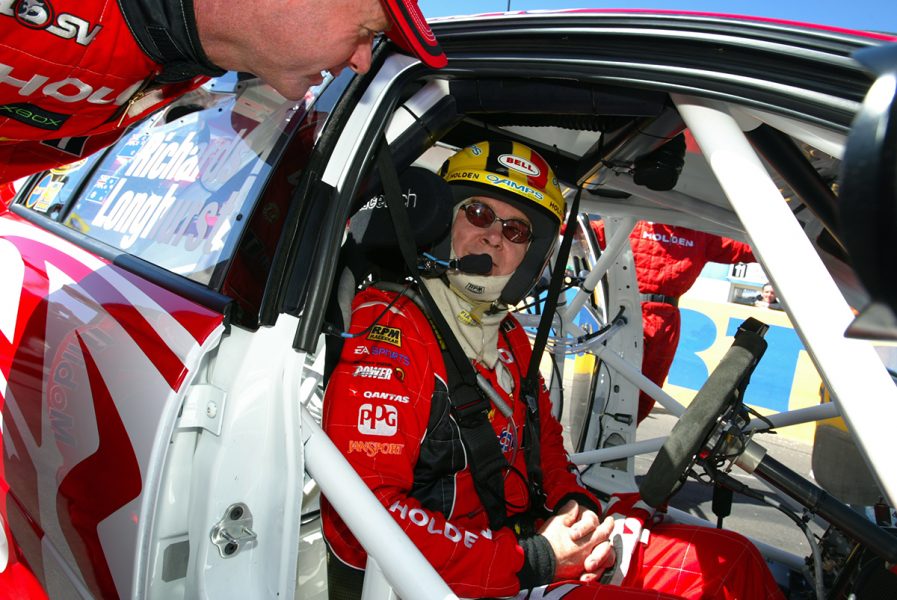 Outside of your seven wins in the Bathurst 1000, what was your most enjoyable or satisfying race at Mount Panorama?

The most satisfying and enjoyable was in 2003 (above).

Skaifey and I won in 2002, and the next year he said they'd like to have me back [at the Holden Racing Team], but they'd like me to take a lead role in the second car and drive with Tony Longhurst.

I wasn't at my very best in a V8 Supercar in that era because I only drove them once or twice a year, but I got to qualify the car for the race and I was the lead driver.

We qualified third on the grid – I was pretty happy with that, not being a regular V8 driver – and we ran fifth in the race, but we were only around six seconds behind Greg Murphy who won. 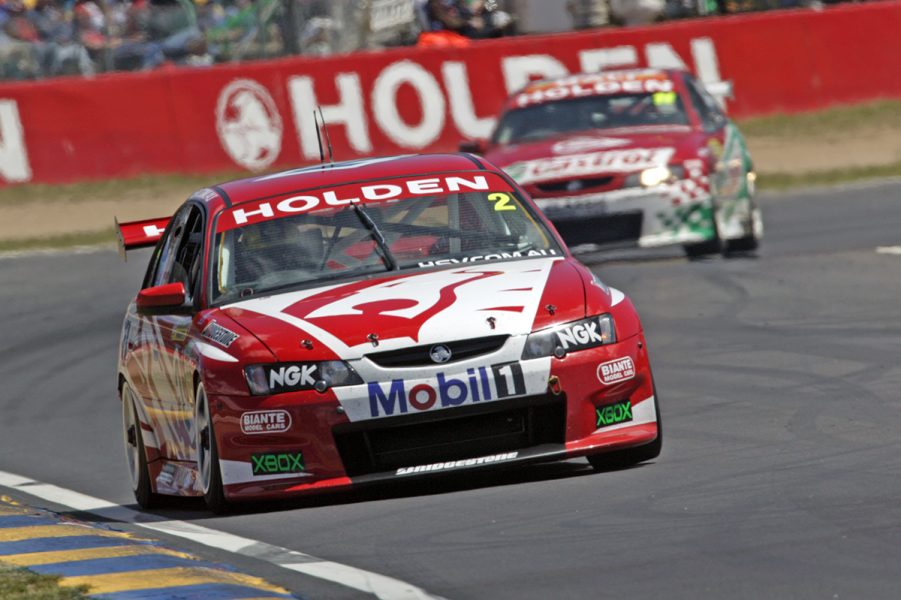 And I had a battle with my son Steve at the end, which was terrific – he just pipped us. He was in front of us for the last few laps, so he finished fourth and we finished fifth.

Don't get me wrong, I had lots of other great drives at Bathurst, but 2003 was definitely the best drive I ever had at Bathurst.

You'll see me in the Group A and Group C touring car class (Heritage Touring Cars) where I'll be driving a BMW for my good friend Pete Sturgeon in New Zealand. That's one of the cars I raced in Australia in the day.

I've got my Nissan Skyline HR-31 that I won the 1990 championship in and I'll drive that on occasion.

That's all the racing I'll do, plus I'll do some sprints and my ride days. And I'm really, really looking forward to it.