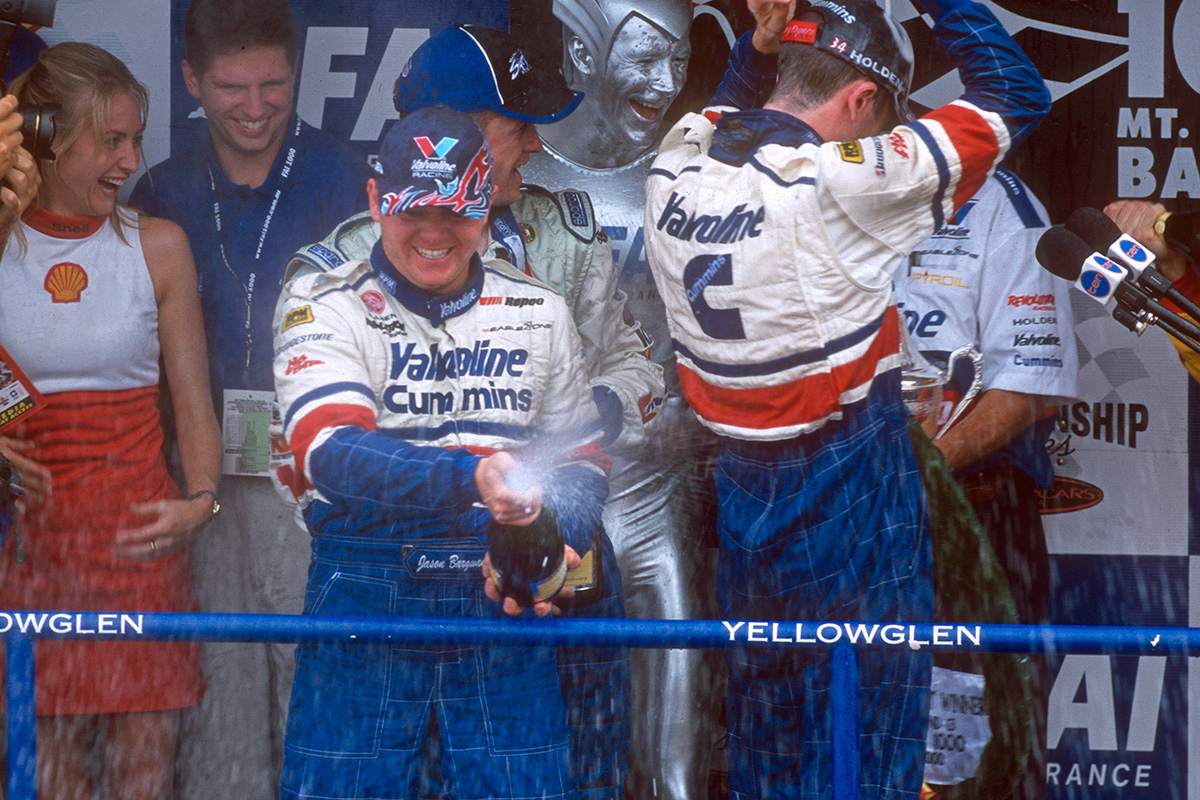 The late-1990s was a great time to be a rising star in Australian motorsport.

Amid the V8 Supercars boom, team owners were slowly waking up to the fact that there was a wealth of talent in the nation's junior categories, all hungry and capable of making the step up and racing at the front.

Jason Bargwanna was at the forefront of the wave of youngsters to hit the limelight.

'Bargs' made his Bathurst 1000 debut at 18 years of age; a decade later, he etched his name into the record books as a winner at Mount Panorama.

Born into a racing family, he can still be found at racetracks helping guide the next generation of racing Bargwannas – that is, when he isn't flat out running his family's businesses, as he was when Saturday Sleuthing caught up with him. 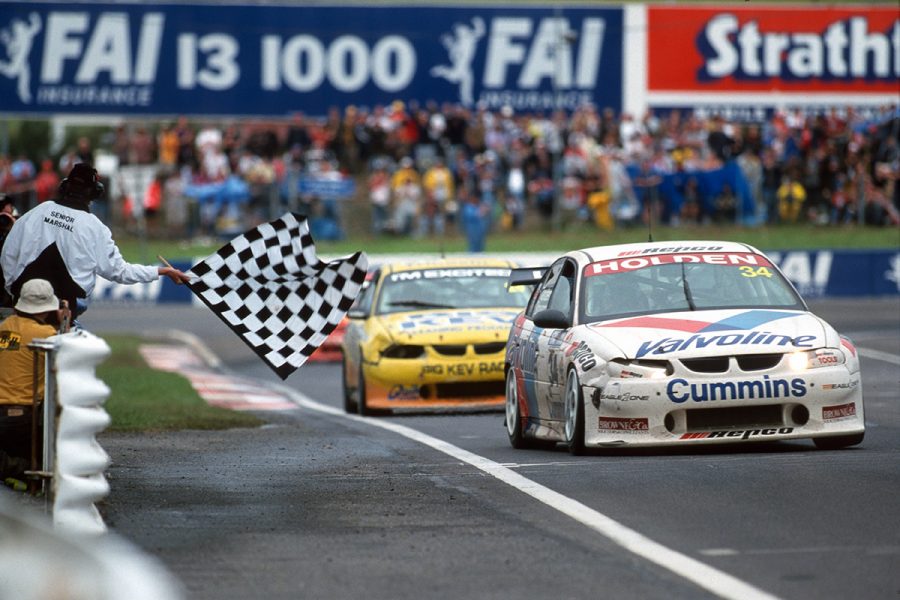 What makes up an average day in the life of Jason Bargwanna in 2019?

We currently run three businesses: two are Red Rooster restaurants, and the other is a transport logistics company in the Gippsland area.

A typical day starts around midnight with the transport company, and they're usually about 12 to 14 hour days at the moment. So there's a fair bit going on.

So busier than when you were racing full time?

Much busier! But in a different way. We employ around 90 people and we're trying to develop a bit of a business for our future, so there's a fair bit going on. 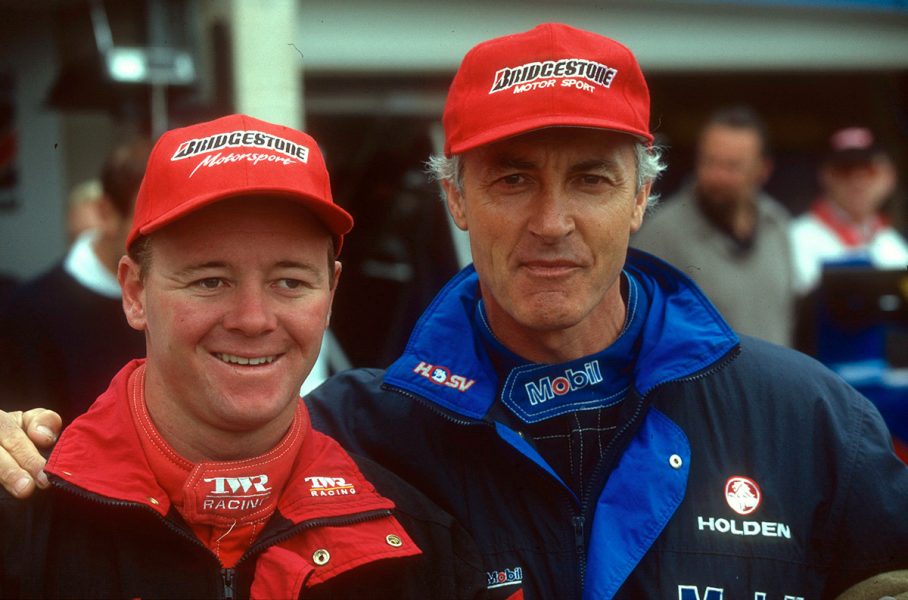 I grew up in a motorsport family.

My father, his twin brother and everyone around us were into racing. As a kid there was always a race car in the shed at home.

Right from as far back as I can remember I always wanted to race, be a professional and make it to the big time.

The thing that really drove my career was the desire to win Bathurst. 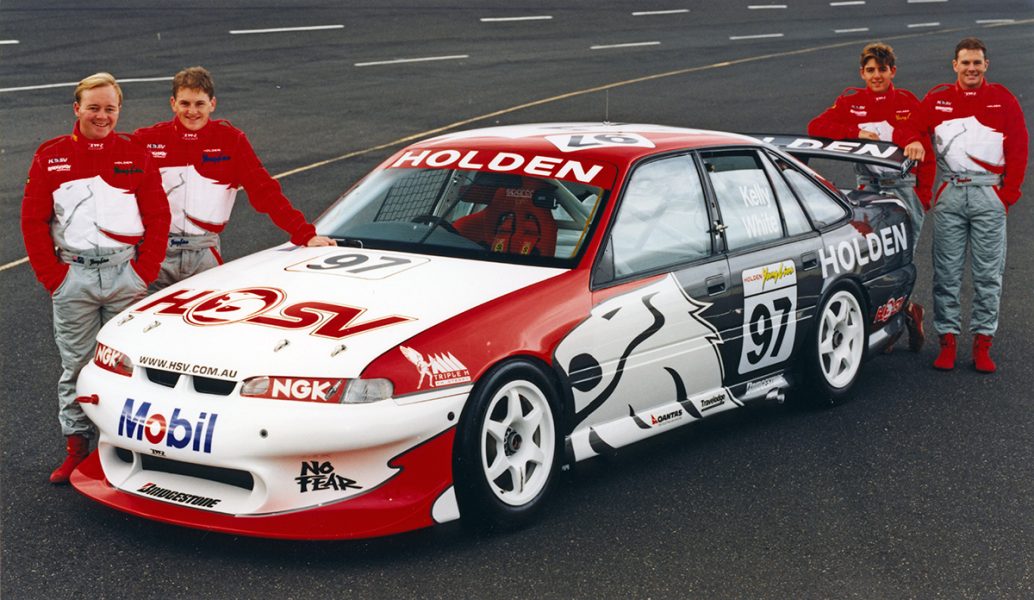 The original HYL squad in 1997

1997 was your big break, How were you selected to be one of the Holden Young Lions?

Through the mid-'90s there it was all about trying to work and raise a budget.

For me it was always about getting into Formula Ford because, in that era, it was the showcase for young talent and that's where you had to be.

I borrowed money, stole, did everything I could to get onto the track!

We bought an old car and went and mixed it with the front-running guys; Jason Bright, Mark Webber, Craig Lowndes, Steven Richards… that was my era of Formula Ford.

The success that we had there meant that there was a chance to join the HYL program as one of the four drivers.

There were no guarantees; I had to borrow some money from the bank to fund that seat. It was an opportunity that was too good to reject.

I really grabbed it with both hands, and was fortunate enough to be, with Mark Noske, one of the two selected to go to Bathurst. That was a very exciting time. 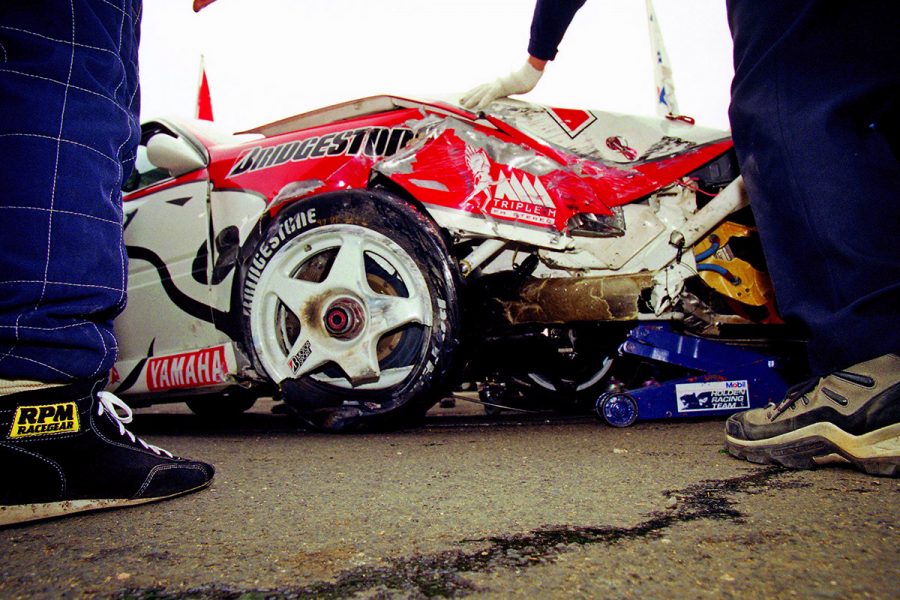 The aftermath of the Bathurst crash

Bathurst 1997, then. From fastest in qualifying heading into the Top 10 Shootout to crashing out in the Sunday morning warm-up. Looking back now, what impact did that weekend have on you and your career?

It was just one of those weekends where it all came together.

In qualifying Mark and I each had the opportunity to have a go. I ended Friday fastest, which at that stage was a fairly surprising result for a lot of people, I think.

That led to some opportunities through the media, etcetera, through that weekend. It was very exciting.

We had the Shootout, and I was pretty comfortable on the lap. I remember it being a good, clean lap, similar to the time on the Friday and it meant that we started fifth on the grid. We were looking forward to the Sunday.

It was just a small mistake from my part on the Sunday morning. I clipped the fence at the wrong point (approaching Forrest’s Elbow) and ended the day for everyone. Very disappointing, but that's part of the sport.

We put a helmet on every time we get in a race car, and there's a reason for that; sometimes it goes wrong.

It wasn't a good time for it to go wrong, but Garry Rogers recognised that there were a pile of positives in that and took a chance on me for the following year.

That led to being on the podium at Sandown for my second V8 Supercar race, winning a race at Calder, and then went back to Bathurst and shared a podium with (co-driver) Jim Richards after a battle with Larry Perkins right to the end of the race. 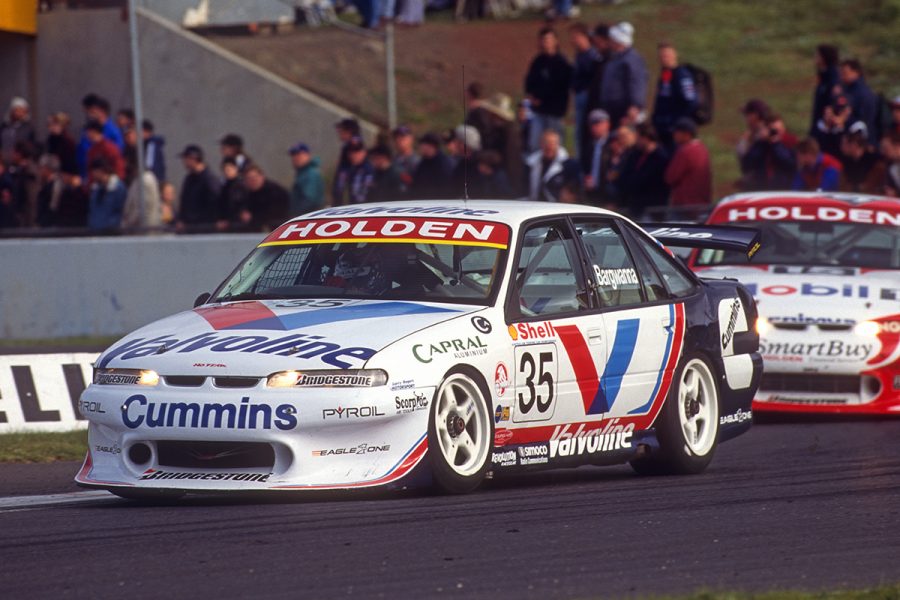 Plenty is made of Garry Rogers' reputation for moulding up-and-coming drivers. Was he pretty hands-on with you and teammate Garth Tander?

When I started out at Garry's I was working in his car dealership Monday to Friday and had the chance to race on the odd weekend. As a young driver, you're prepared to clean the toilets or do whatever it takes to get the opportunity.

Part of working for Garry was certainly doing it his way, which is fine because there's a number of us that have come through that program that have had successful careers and learnt a lot from it. 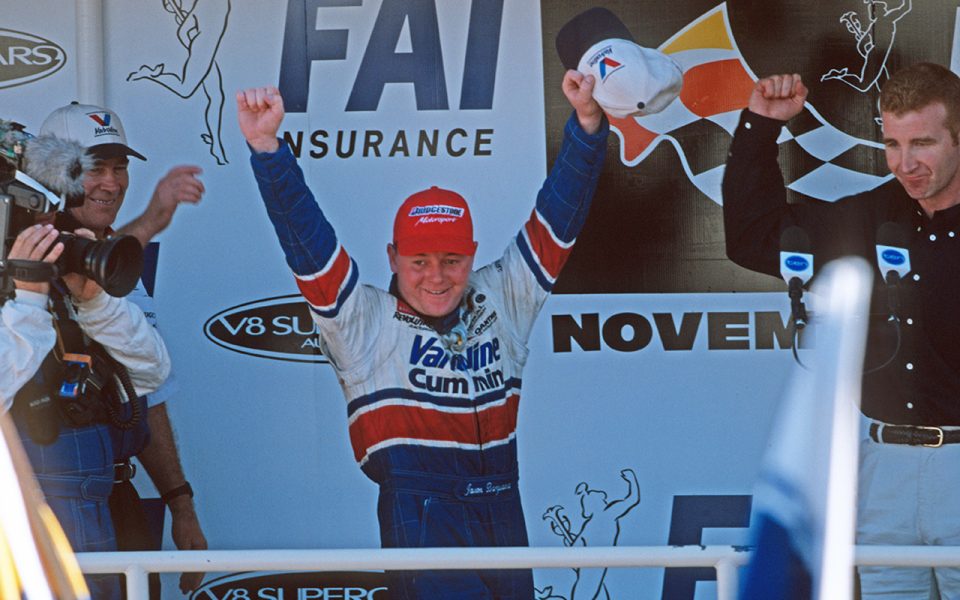 It seemed like either yourself or Garth were always up there fighting at the front in that 1998-2000 period. What was so special about GRM in that era?

Back in those days – we're talking nearly 20-odd years ago – the cars were a lot more raw and it really came down to a good team effort.

Garry was able to line up a lot of people who were heading in the same direction and had the same goals.

We all worked really hard together to knock off HRT, which was really at that stage the team to beat.

It was quite an exciting time. It was just a great group of people who all had a common goal. It's unique that you find that in a race team. 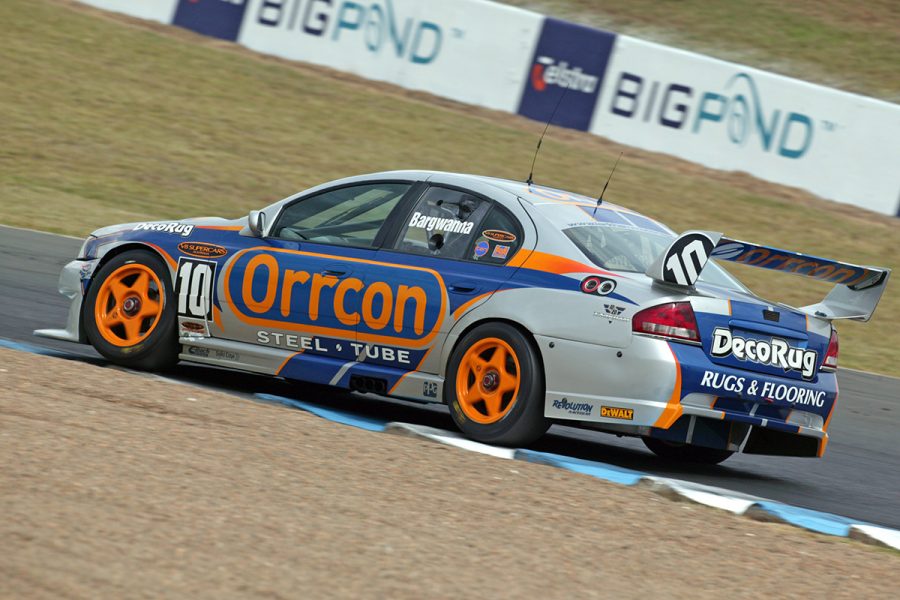 My preference would probably have been to stay with GRM and commit to that program, but circumstances around what was going on there didn't allow for that.

Howard Marsden [Ford's then motorsport boss] and I had spoken a lot over an 18-month period, and he was instrumental in the move to what was Mark Larkham's team, which was expanding to two cars.

In that period, Ford was becoming a very strong program in terms of V8 Supercars. I liked where it was all heading; all depending on the right opportunity. 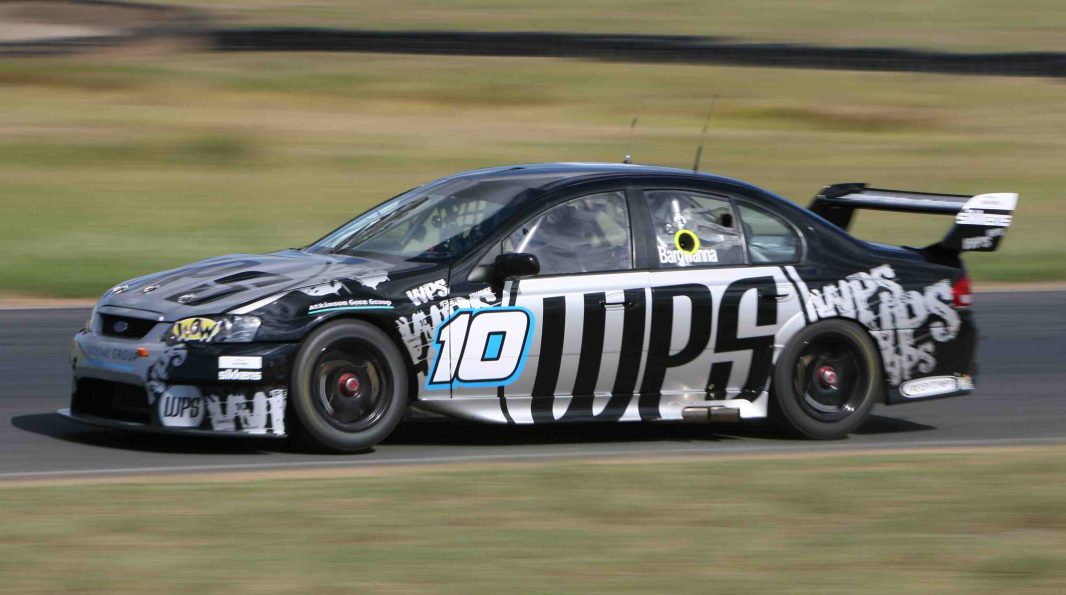 In Garry and Larko you’ve worked under some pretty interesting characters … including Craig Gore. What was he like?

Craig being Craig, I think everyone had an opinion on what he was like. It was a situation that developed through Larko's business being forced to be sold.

At the start of '06 we were in a pretty strong position with some good equipment and good people, ready for a big year.

Things changed very quickly. At the end of January, all of a sudden we were part of Craig's WPS team.

Craig was an interesting character, and obviously that relationship ended when his team disappeared as well. 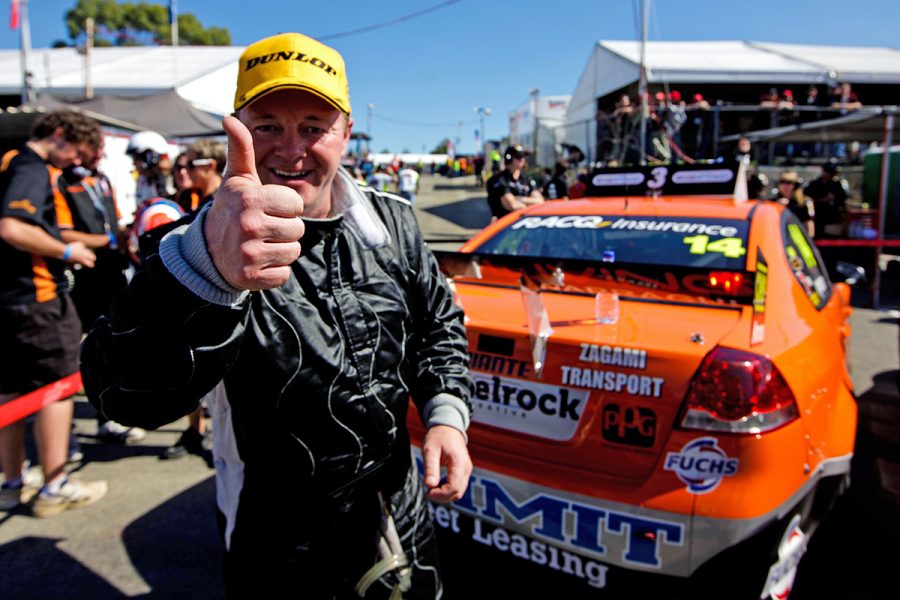 Your last full-time Supercars season was with Brad Jones Racing in 2011. Why step away?

It wasn't a conscious choice that I was ready to step away. We'd actually accumulated a significant package within my sponsor group, and were negotiating with a couple of teams.

The market changed dramatically; all of a sudden the musical chairs stopped… it was funny how we had a pocket full of money and no real good opportunity to make that work. It was quite frustrating.

I was really looking forward at that stage to the Car of the Future because it was the sort of driving style that I really liked, a car that works well on the front tyre. 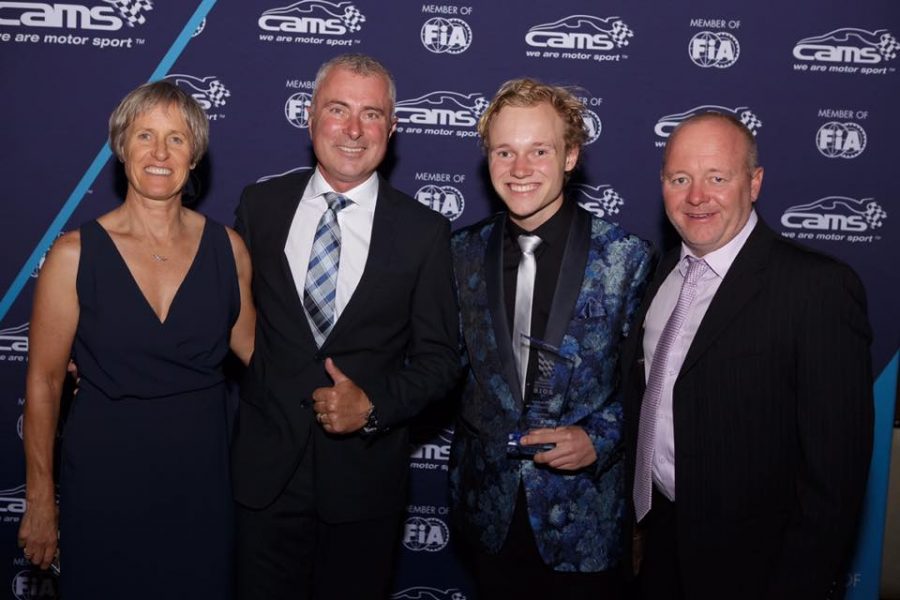 You’ve now got your son Ben coming through the ranks, racing in Formula Ford. Where does he want to go in the sport? And what’s it like now being on the sidelines watching him race?

I quite enjoy running the car and having the headphones on working with Ben.

His eyes are certainly set on the big prize; he wants to put the work in and make it all the way, if he can, to race at Bathurst and a Supercars seat.

That path, in today's environment, is probably a little bit grey.

I don't think it's as simple as what it was 20-odd years ago, but the sport's developed and changed a fair bit.

I really enjoy having worked with him from karts into Hyundai Excels, because they were basic, affordable and a great platform for a young driver to develop some skills, learn some tracks, wreck a gearbox or two, and work out how to heel and toe.

And single-make racing is always a good leveller in terms of talent, and identifying who can drive and who can't.

It was pretty exciting for him and I to work on the car in the shed and come away with the Victorian championship, a podium at the Australian titles and win at Bathurst as a 16-year-old. It was a pretty great year.

Obviously if you want to get serious with it you've got to take the next step, and for us the obvious choice was Formula Ford. So far he's adapted to it really well and he's certainly on the pace straight away.

He's just going to take it a bit easy this year – he's also doing Year 12, his schooling's quite important – and commit to a championship year next year. 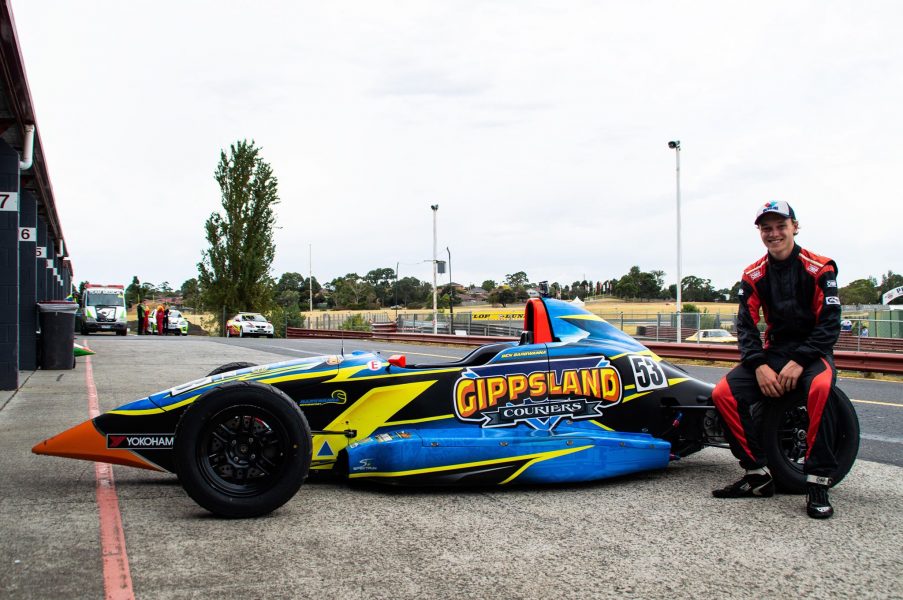 What’s your own status as a race car driver at the moment? Active? Semi-retired? Retired?

I had eight years in New Zealand and had some great success there, winning a couple of championships. It was fantastic to be a part of that and work with some great people.

I'm also really focused on Ben's racing at the moment and I really enjoy it.

He and I did an endurance race together as a father-son combo in the little Excel last year and it was really good fun. It was more about doing it with my son than it was about the driving.

I certainly enjoy driving still. I wouldn't say that I've retired in that sense, but the idea of chasing championships isn't really my focus at the moment.

I really want to try to get my business sorted out. That gives us more of a future.

But I'm always tempted to hop back in something that's pretty cool.