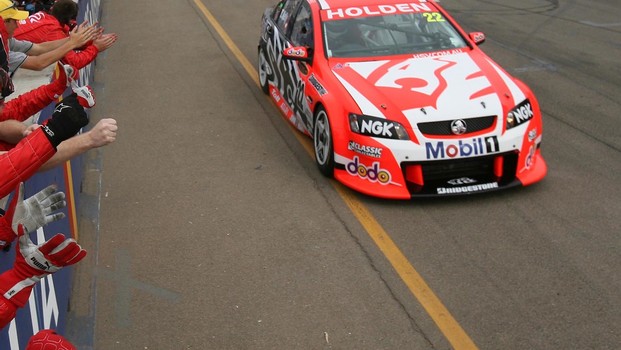 Historic racecars are highly sought-after by collectors all over the world and it’s nosurprise the V8 Supercar era of Australian touring car racing is alreadyattracting a range of parties keen on securing their piece of racing history.

This week onSaturday Sleuthing, our V8 Sleuth Aaron Noonan spent some time with JB HI-FICEO Terry Smart, who has recently begun his V8 Supercar collection with thepurchase of the very first race-winning VE Commodore from 2007 – a car withquite a history.

Smartpurchased the car from Brad Jones Racing earlier this year, restored back toits #22 HRT red livery as taken to victory in the Saturday race of the 2007Clipsal 500 by Todd Kelly – the first of a record 103 race wins for the VE/VEII Commodore.

“I’m a fan,not a fanatic, but I have a passion for cars, especially Aussie muscle cars andV8 Supercars are right at the pinnacle so it’s great to own one,” Smart toldour V8 Sleuth this week.

“I’ve alwaysbeen keen to own one. That car in its original day-glow HRT paint job is one Iremember. I was keen to have it in the shed when it came up.

“We sourced anengine from Walkinshaw Racing so it’s back as close as possible to when itraced in 2007 with Todd Kelly.”

Former V8Supercar team owner Paul Cruickshank has acted as something of an advisor toSmart over the journey of securing cars with race pedigree.

“Paul hashelped me out with servicing and restoration of cars in the past, so having himthere gave me the confidence that I’d get a car as true as it possibly could beback to how it was in 2007.”

Smart has also just secured a sister chassis to this car – WR 004 – the cartaken to the 2007 V8 Supercar Championship Series by Garth Tander and the TollHSV Dealer Team.

Ironically,his WR 003 car in the hands of Kelly won the last race of that year at PhillipIsland, holding out Jamie Whincup and denying him the points he needed to beatTander to the crown.

“It was anopportunity to get a car with a little bit more significance,” Smart says ofthe ex-Tander car, which has been sourced via Lucas Dumbrell Motorsport.

“Paul (Cruickshank) is sourcing the appropriate parts and it’s going back intoits 2007 colours. We’re expecting that will be within the next three or fourweeks. It’s underway and in the process as we speak.”

But it’sSmart’s ex-HRT chassis that has started his collection – the first VE Commodoreto claim a V8 Supercar victory – which we are focusing on today.

Debuted byTodd Kelly with victory in Adelaide, it was driven by Kelly throughout 2007,including a race win at Eastern Creek on the Queen’s Birthday weekend andvictory in the final race of the season at Phillip Island. It was also Kelly’sfinal race for HRT and Walkinshaw Racing and he finished sixth in thechampionship.

Kelly and Nathan Pretty drove it at Sandown during the endurance portion of theseason, while Glenn Seton teamed with Pretty at Bathurst, thus making hisfirst-ever Bathurst start in a Holden!

The car also appeared in the black colours of Chevrolet for the Bahrain eventlate in the season.

It was sold toBrad Jones Racing for 2008 when the Albury team moved away from Falcons andbecame the #12 BOC car of Andrew Jones with Walkinshaw Racing technicalsupport.

Jones drove itall season, surviving a high-speed rollover in the wet at the Phillip Island500 before nosing into the wall at Bathurst, ending the endurance assault by heand Cameron McConville.

This chassisbecame Jason Richards’s #8 BOC car in 2009 when he joined the team. He took hisbreakthrough pole position in Darwin aboard it and it’s the same car McConvillewas driving when he survived a high-speed ‘off’ at Phillip Island after contactwith Steve Owen at the end of the front straight.

He and thelate Richards bounced back on the Mountain, the Kiwi fastest in provisionalqualifying and the duo finishing a fantastic second in the race on Sunday.

BJR moved tousing Noonan Race Engines (Jamie Noonan, not our V8 Sleuth!) for 2010 and thischassis became the #21 Fair Dinkum Sheds car of Karl Reindler. He drove it allseason with David Wall co-driving at Phillip Island and Bathurst and ItalianFabrizio Giovanardi on the Gold Coast.

It was retained as a spare by BJR in 2011 and was called upon for Winton forReindler to use after his fireball accident at Barbagallo.

He only droveit for one event before moving into another car and this WR 003 chassis wasthen used by Andrew Jones in the Dunlop Series at Townsville, QueenslandRaceway (where it won a race) and Sydney to round out the season.

Not many people probably realised, but it was this chassis that was on displayat the Lockwood Racing launch last year (cloaked in #14 Lockwood panels) beforeit appeared in a range of liveries in Jones’ hands in the Dunlop Series for2012.

After fiveseasons of on-track activity, the car was surplus to BJR’s requirements for theDunlop Series this year (where it runs Jones and Chris Pither in the cars usedlast year in the V8 Supercars Championship by Jason Bright and Fabian Coulthardrespectively) and thus was sold to new owner Smart.

While the WR003 chassis may indeed not be very old in terms of years, its been involved ina range of moments in V8 Supercar history and is proof that the cars of the eraare becoming collectables far earlier than the Group C and A machinery did back‘in the day’ when they became surplus to requirements.

Have a car you’d like the V8 Sleuth to chase down? Then drop him a line and seeif you can set the Sleuth a new mission.

27/06/2013
Stay In The Know
Sign up to the Virgin Australia Supercars Championship Newsletter
We use cookies to ensure that we give you the best experience on our website. If you continue to use this site we will assume that you are happy with it.Ok