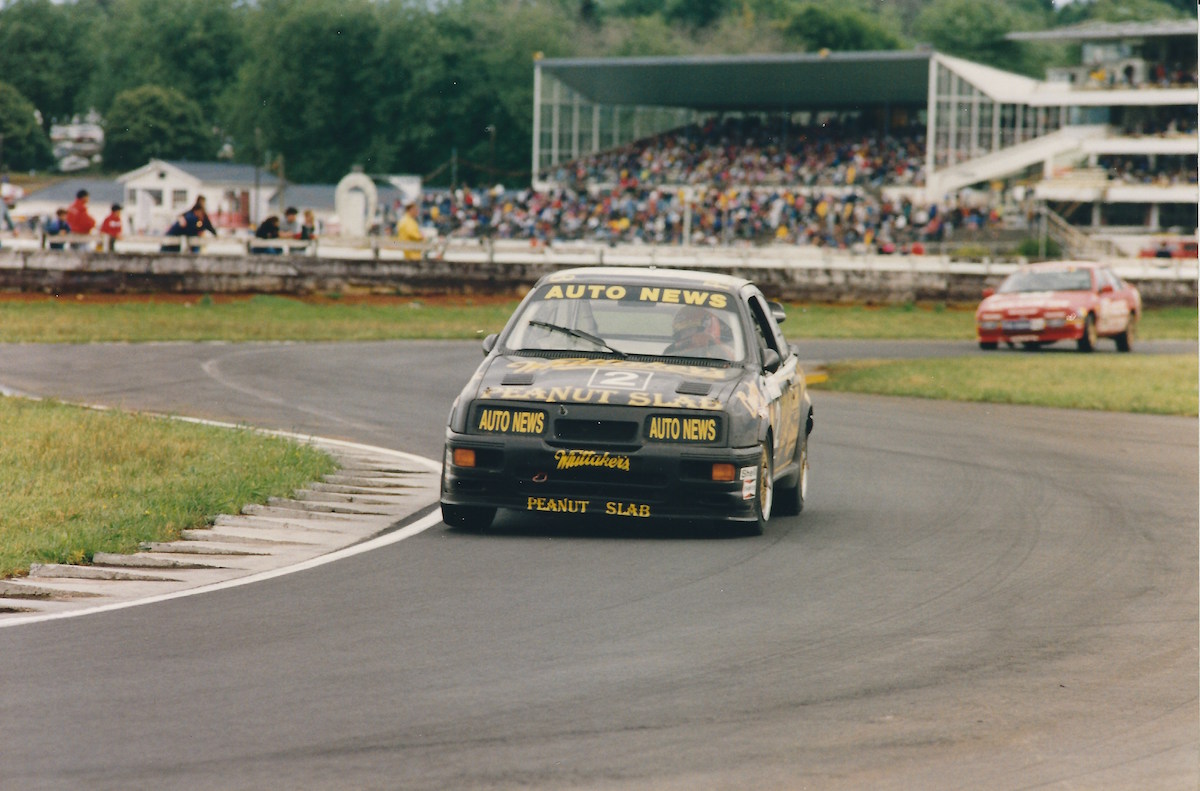 As far as passionate racers come, Kiwi ace Greg Murphy is top of the pops.

The four-time Bathurst 1000 winner polarised fans during his 200 round Virgin Australia Supercars Championship career between 1997 and 2014 with his intense passion and heart-on-sleeve method of operation.

Of course that also includes his dominant performances on home soil at Pukekohe in New Zealand, site of next weekend’s ITM Auckland SuperSprint where ‘Murph’ will be behind the microphone in pit lane as part of Supercars Media’s coverage.

But for all of that Holden history, today on Saturday Sleuthing we’ve taken a drive down memory lane with Murphy to recall the time he drove, gasp, a Ford Sierra RS500 touring car!

Yep, that’s right, the Holden hero started his career in tin-tops in a Ford!

Back in the late 1980s and early 1990s the annual Nissan-Mobil 500 touring car endurance races were held on consecutive weekends, the first on the bumpy street track in Wellington and the latter on the fast and flowing Pukekohe.

When the Nissan-Mobil races came around in late 1992, a very young open-wheeler driver named Greg Murphy was just starting to get noticed.

“It was my first touring car drive,” Murphy remembers.

“I’d done pretty well in 1991/92 in a Ralt RT4 in Class 2 in the Bruce McLaren Cup and was starting to gain a bit of momentum around the place. Mark Petch (the Sierra’s owner) was always looking and interested in what was going on around the place and he approached us, from memory. 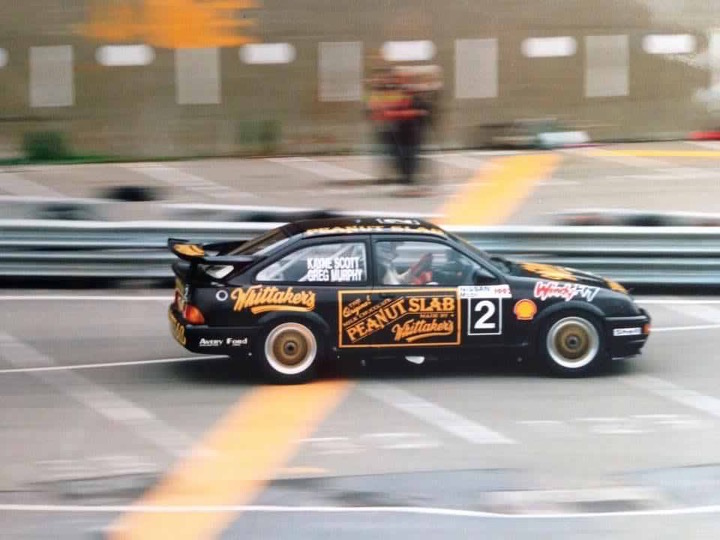 “At the end of 1992 going into ’93 I had managed to get into the Shell roster of drivers, they were backing quite a few cars; Kayne Scott was with Petch in the TranzAm, Paul Radisich was in there, (the late) Ashley Stichbury in Formula Ford and I was running a Swift in Formula Atlantic.

“Petch came to us and asked if we were interested in running in the Sierra with Kayne – we had to come up with 10 grand, which was a lot of money to us at the time, but looking back on it not much at all.”

The Sierra was backed by Whittaker’s Peanut Slab, an ex Wolf Racing car that had raced at Bathurst in 1988 in the hands of 1985 race winner Armin Hahne and ex-Volvo star Robbie Francevic, in 1989 with Francevic and Italian Gianfranco Brancatelli and in 1990 with Brancatelli and Brit Robb Gravett. 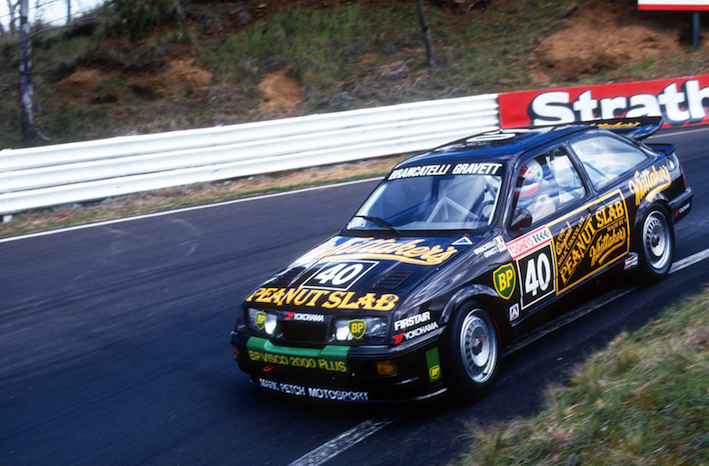 “The first time I drove it was running in an engine at Manfeild one day in the teeming rain,” says Murphy.

“A Sierra Cosworth for the first time was very interesting! Session after session we slowly wound the boost up. It was amazing, a car with brute force. I remember thinking; ‘oh my god, how did people drive these things?’.

“It wasn’t a very big car but it felt like that when you were in it – that’s what made it so challenging to drive; when it came on tap (the turbo) it was like a space shuttle taking off, that’s how it felt to me at the time.”

Murphy and Scott gave a great account of themselves, finishing fourth in both endurance races, placing them second overall for the Nissan-Mobil Series.

This was the first time Murphy had shared a track with future Holden Racing Team teammate Peter Brock as well as other Aussie stars like Dick Johnson, John Bowe and Tony Longhurst, not to mention the European BMW stars in the Schnitzer team, Emanuele Pirro and Joachim Winkelhock.

“That’s one of the things that really got me. It was more than just driving the Sierra, it was the fact I was on the track with all of these heroes at the same time; Brock and Johnson and all of them, it was an amazing feeling.

“I was just a young guy living an amazing dream. I was relishing the whole opportunity. The Wellington race was wet to start with and we were charging along and going all right. I got a radio call to see if I was happy to stay in to the finish.

“I remember thinking ‘wow, this is hard work’ but there’s no fricking way I am getting out of this car regardless of how knackered I was. So I replied that I was all good and going to stay in – I’d never been in an endurance race in my life, the body was wondering what I was doing to it!

“It was physically very demanding. By the time I finished I had to be poured out of it. I was rooted, but it was a massive experience, I loved every minute.”

Of course, the rest is history. Murphy continued to make a mark in open wheelers and progressed to Formula Brabham, coming to Australia in 1994 to compete in the Australian Drivers Championship and then jump aboard a Toyota two-litre car in which he made his Bathurst 1000 debut.

Two seasons in Brad Jones Racing’s Audi Super Tourers followed in 1995/96 combined with an endurance seat with the Holden Racing Team before a full-time V8 move in 1997.

And from there Murphy never jumped back into a Ford touring car until last year when he sampled David Reynolds’ The Bottle-O car for a TV story at Sydney Motorsport Park.

And what of the Peanut Slab Sierra?

It lives on, competing in Historic competition in New Zealand in the hands of Andy Greenslade where a range of old Group A and Super Touring cars live on and enjoy a second life among Historic racing. 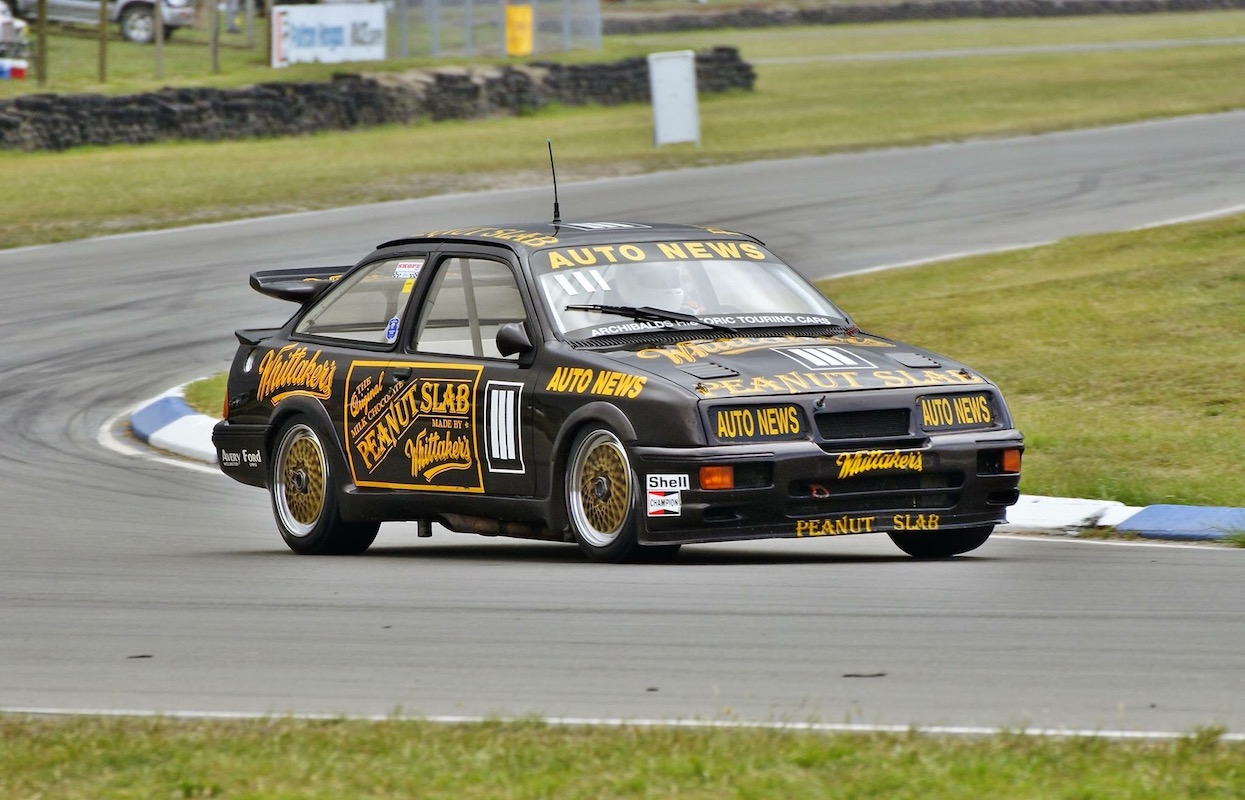 “I’ve had the car for six or seven years now,” he told the V8 Sleuth this week.

“I intend to keep racing it in New Zealand and I’d love to come and bring the car to Australia sometime.”

Saturday Sleuthing takes a break next week for the ITM Auckland SuperSprint at Pukekohe but will return on November 12 with a story on a car from the popular Group A era of Australian touring car racing.