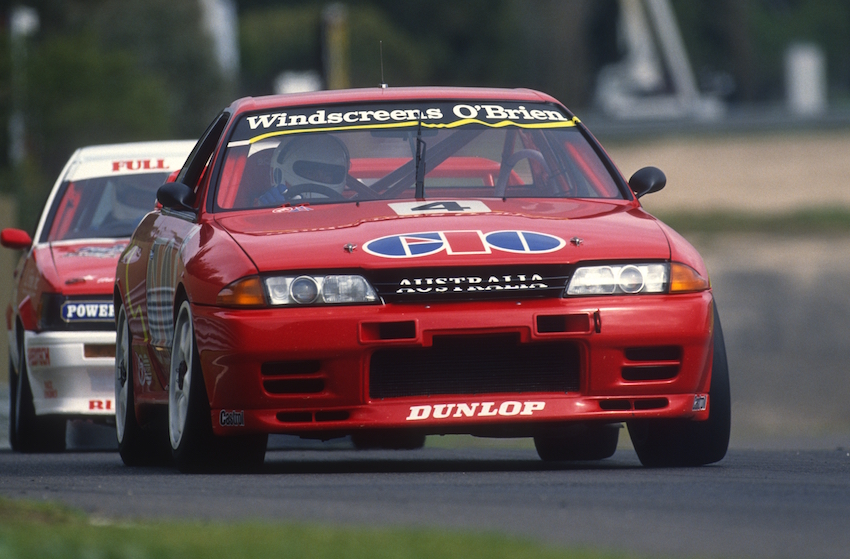 This year’s Wilson Security Sandown 500 is the ‘Retro Round’ of the Virgin Australia Supercars Championship with a range of teams adopting ‘old school’ colours for the first race of the Pirtek Endurance Cup.

So, this week on Saturday Sleuthing we’re winding back the clock to 1991 to celebrate the 25th anniversary of ‘Godzilla’, Nissan’s mighty GT-R, claiming victory in the Sandown endurance classic.

While the factory car of Jim Richards and Mark Skaife won at Bathurst that year, the Sandown 500 race (then known as the Drink Drive 500) was won by the GIO-backed privateer GT-R owned by Bob Forbes and driven by Mark Gibbs and Rohan Onslow.

That race victory remains the car’s crowning achievement from its time spent racing in Group A competition over 1991 and 1992 and the great news is that the twin-turbo machine continues to race in on Historic Group A in Heritage Touring Cars with owner/driver Tony Alford.

One of five Nissan GT-R Group A cars built by Gibson Motorsport, this particular car was the only GT-R built for a customer team.

“That car was as good as our cars,” recalls Fred Gibson.

“The only different between them were the drivers and the tyres. Bob had a deal with Dunlop for freebie tyres and we ran on Yokohamas.

When the car won the Sandown 500 in 1991, things were a lot different on the Australian touring car landscape.

The recession had struck so field sizes for touring car rounds were very low and Sandown was no different despite being a long-established classic race, with just 15 cars starting and a late night one hour highlights package on ABC TV meaning that quite a few big teams elected not to compete given the lack of exposure for their sponsors.

Dick Johnson left his Shell Sierras in Queensland, the factory Gibson-run Nissan team left its pair of GT-Rs in the workshop (though Alan Heaphy joined the GIO team for the weekend to oversee its assault), Tony Longhurst’s BMW team ran a single car and a range of other teams stayed at home.

Come race day at Sandown in 1991 and the GIO Nissan qualified second on the grid, Gibbs beaten to pole by Glenn Seton’s turbo Ford Sierra that he shared with the late Gregg Hansford. 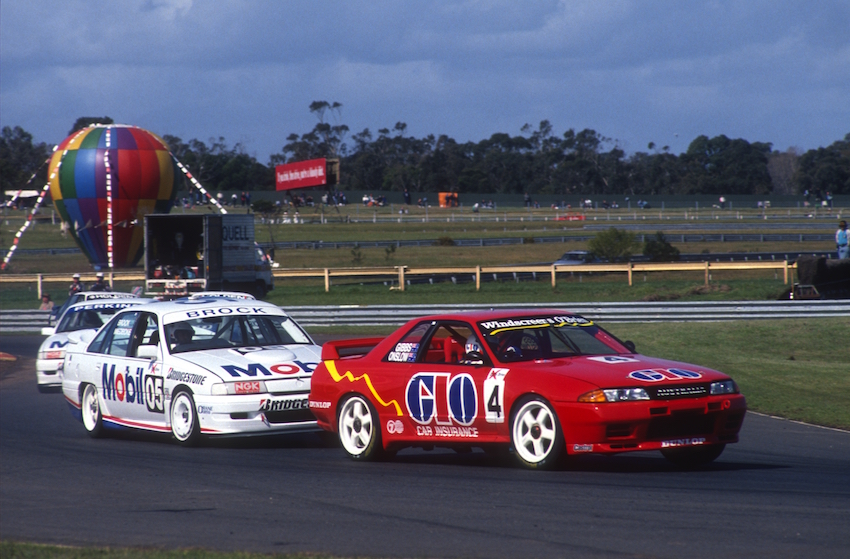 Gibbs started the race and used the four wheel-drive Nissan’s superior traction to dust the field to the first corner.

Peter Brock, back aboard a Perkins-run Mobil Commodore after three years racing BMWs and Sierras, gave chase followed by a slow-starting Seton.

Gibbs lost second gear in the Nissan and in the struggle to learn how to drive around the problem lost the lead to Brock, soon falling back to third when Seton moved into second.

As the race went on many of the front-running Commodores experienced race-ending or delaying failures.

After trouble in #05, Brock jumped into Larry Perkins’ #11 Mobil Commodore only to later have the engine fail in that car. Also lost to engine problems was the pair of Holden Racing Team VN Commodores.

That set up an interesting race to the line between Rohan Onslow in the GIO Nissan and Seton in the #30 Sierra.

Onslow led in the Nissan, short-shifting and conserving fuel, keen to stay in front of a fast-finishing Seton whose Sierra had developed a serious misfire.

Just 15 laps from home Seton’s car cried enough and the Sierra rolled to a stop.

The pressure was off and Gibbs and Onslow took the win, a massive six laps ahead of the second-placed BMW of Alan Jones and Peter Fitzgerald.

The GIO Nissan finished third in the Tooheys 1000 at Bathurst a few weeks later and was again raced by Gibbs during the 1992 ATCC and at Bathurst where he and Onslow finished sixth in the rain-affected event. 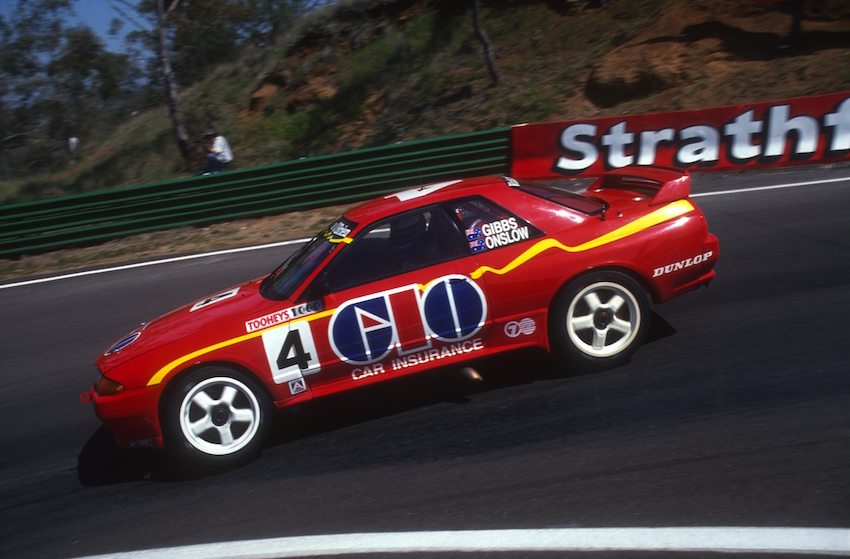 Gibbs ran the car in the Adelaide Grand Prix support events to round out the season before it was pensioned off in favour of a Commodore for the new V8 touring car rules of 1993.

Bob Forbes retained the Nissan for a few years and son Rodney actually raced it in Marque Sports Car competition in Sydney prior to his arrival in V8 Supercars in 1998 in a privateer Commodore.

The GT-R was sold off and has since been through the hands of a range of different owners that have raced it in Heritage Touring Cars before being acquired last year by current custodian Tony Alford. 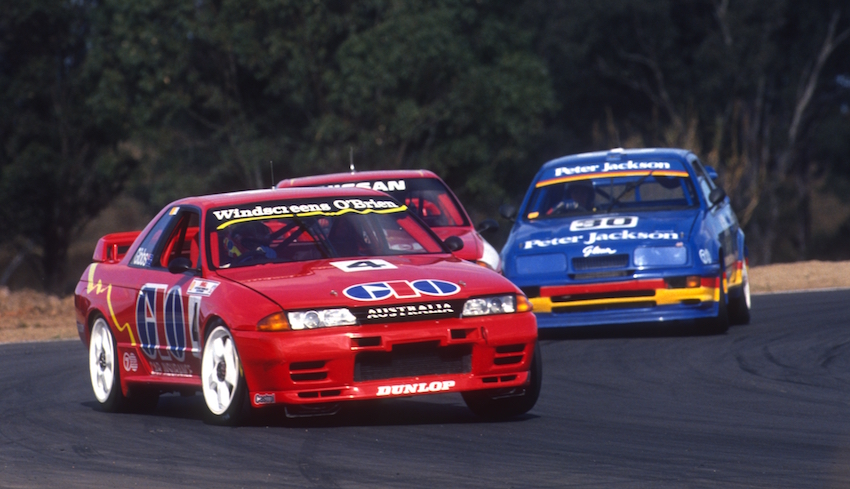 The GIO Nissan GT-R is forever a part of the long and storied history of the Sandown 500, a race that stretches right back to the Six Hour touring car race held there in 1964.

Saturday Sleuthing will take a break for next weekend’s Wilson Security Sandown 500 but return on September 24 for the first of a two-part special featuring the Bathurst-winning cars of nine-time winner Peter Brock.