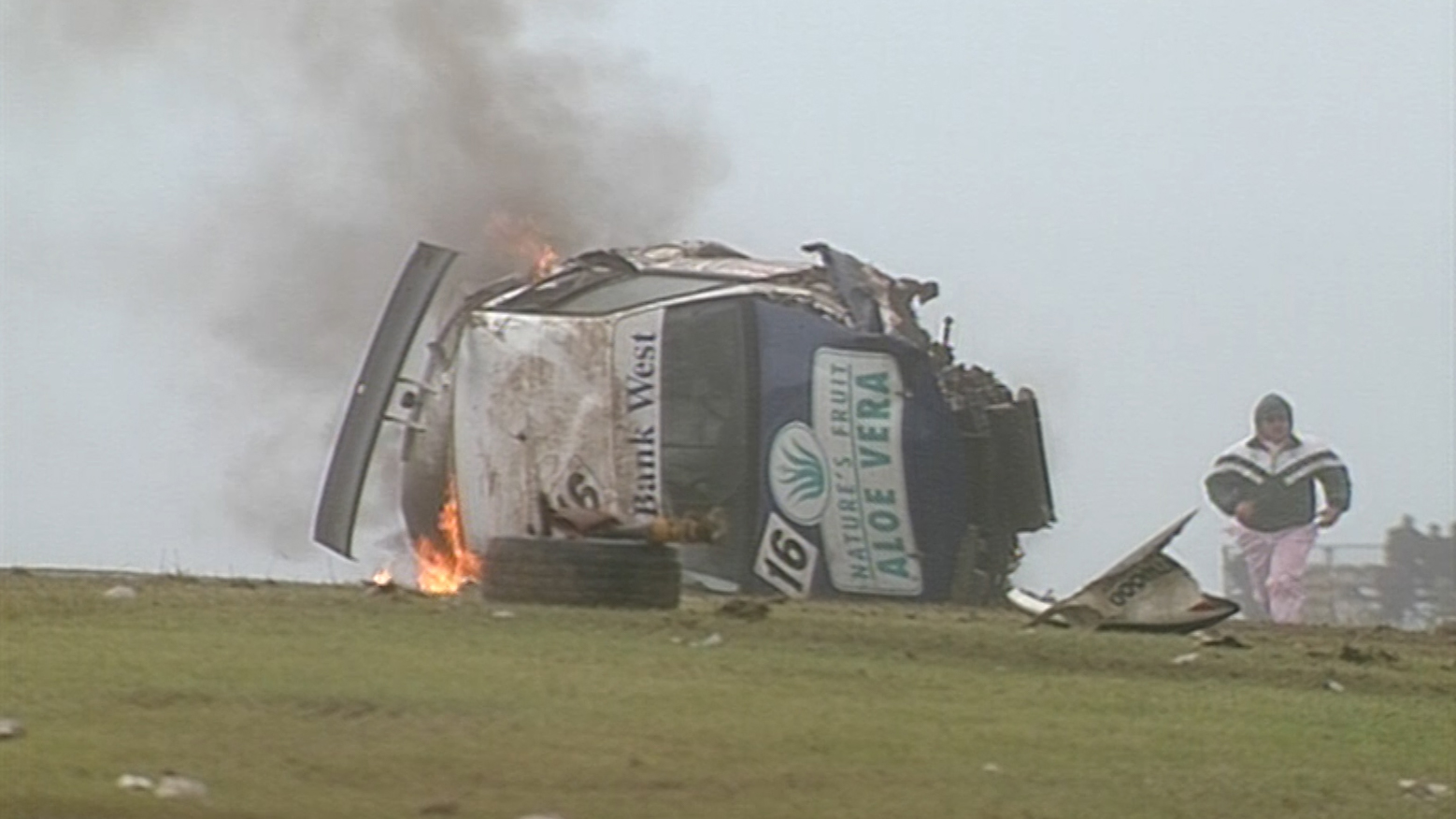 One of many Formula Ford racers to arrive amid Supercars’ boom period at the end of the 1990s, Dugal McDougall took a slightly different path to his contemporaries.

After arriving in Supercars with a bang – turning his car into a “major, major sausage,” to quote Barry Sheene, in a crash at Phillip Island in 1999 that made highlight reels for years to come – he worked hard to turn a small budget into big results.

In the last edition of Saturday Sleuthing for 2018, we caught up with McDougall as he was about to hop in an excavator to chat about his time in motorsport.

What makes up an average day in the life of Dugal McDougall in 2018?

I work in excavation, so mainly just driving excavators and diesel things that are nice and slow! I don’t have any fast cars or anything like that any more. Anything to do with digging, really. 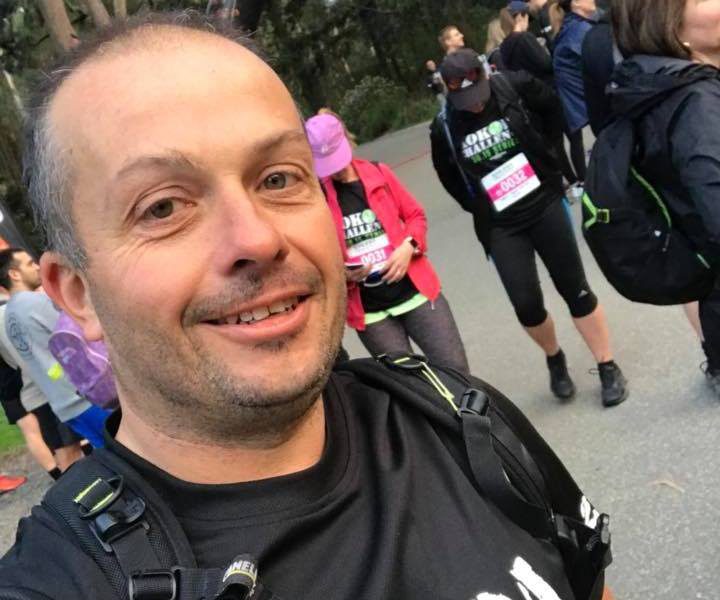 Probably when I was 14 or 15. We’d been going to the Adelaide Grand Prix and we had a marquee there where we were promoting Aloe Vera, our family business.

Phil Ward was racing the Mercedes-Benz back then. Dad was involved in gold mining in Western Australia and we had a 560 Mercedes-Benz. Phil had blown up the alternator on his car and couldn’t get a spare, so he saw that we had our car there and asked if he could borrow the alternator off our car for the weekend!

Subsequently, he blew our alternator up – but didn’t realise. We put it back on our car and made it halfway back to Melbourne.

Phil said, ‘for the inconvenience, I’m running a go-kart school at Oran Park, why don’t you come up and do one of our drive days on me. So we ventured up there, raced at this club day and got the bug.

You raced karts and Formula Ford before you arrived in Supercars. Was that the career goal?

I was racing go-karts, then I designed and manufactured my own kart. Apache was the name. We were selling 120 to 150 karts per year. We were state champions, second in Australia.

The natural progression from there was Formula Ford. I raced a Van Diemen for three years, then raced in the Formula Opel Lotus Nations’ Cup at Magny-Cours in France.

Ligier was based there, and one of the ex-bosses gave us a tour. They were on holidays, so he gave us the full tour – into the wind tunnel, sitting in cars – after hours, which was pretty cool.

His name was Bertrand Decoster and he was the manufacturer of Mygale. We started a relationship with Bertrand and we started bringing the Mygales to Australia.

From there we thought, ‘are we going to go race in the V8s?’ I talked to Dad a bit about it. We met up with Glenn Seton, had a bit of a yak to him before we decided who we were going with, and Larry Perkins offered us a pretty good deal. 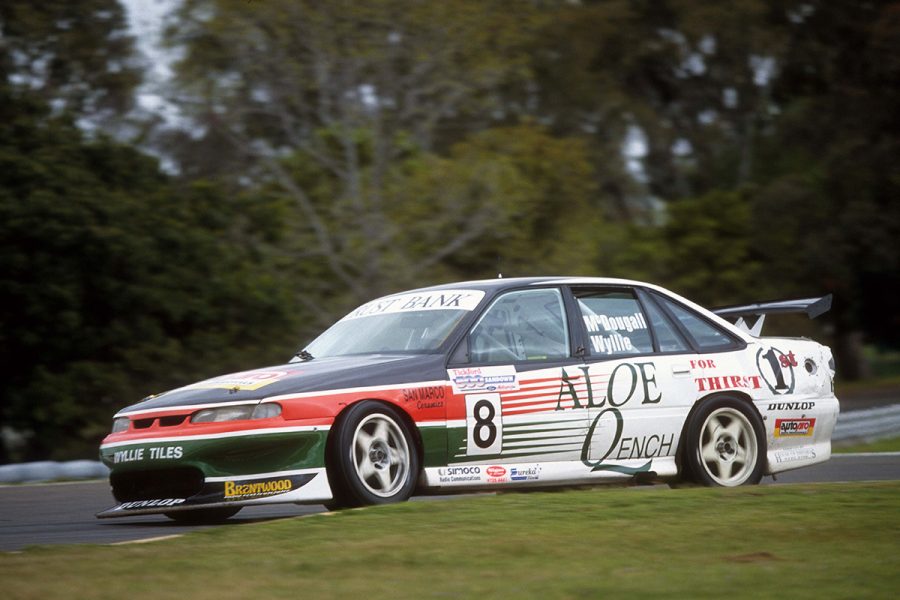 Your first Supercars race was the 1998 Tickford 500 at Sandown with AUSCAR and Future Tourer racer Jason Wylie. How did you find the step up?

We’d only had 30 laps or something in the car the week before at Calder and I’d never driven a Supercar before that. In some of the practice sessions we were 11th or 12th – not bad for either of us not having done any laps!

After Sandown, I don’t remember if we were planning to race Bathurst as well. The plan was that we were going to take the car Russell Ingall had used that year, but Larry asked ‘look, we’ve got a new car for Russell but it’s not quite ready, can we use your car at the Gold Coast?’ I said yeah, sure, even though we hadn’t done the full deal.

So Russell used his car at the Gold Coast – and wrote it off! So we got a different car...

You were one of the drivers on the grid for the inaugural Adelaide 500; what was that first one like as a driver as your first big solo race?

Lots of drivers were feeling the effects, it was hot, a few drivers collapsed. It was exciting but at the same time very challenging.

At the end of the first leg I think we finished 13th, and then the next day Tony Longhurst and I battled and battled.

But Mark Noske shot up the inside of me and bent my steering arm... what could’ve been. But there’s lots of little stories within every team, I’m sure, of the what-could’ve-beens that no-one really knows.

That Aloe Qench VS Commodore came to a pretty spectacular end in 1999. Talk us through that crash in the wet at Phillip Island. What do you remember of it?

It was exactly the same as what happened to Jason Bargwanna at the same meeting. I aquaplaned off, hit the grass, hit the fence and rolled. You’ve probably seen the aftermath of that somewhere...

Yep, on the closer for Sports Tonight every single week for the next five years!

Haha, so yes! It took me a long time to recover from, as far as driving in the rain. In the Formula Ford I was fine, but then once I’d had that big crash in the rain it certainly put the wind up me. The car didn’t give you confidence in the rain. 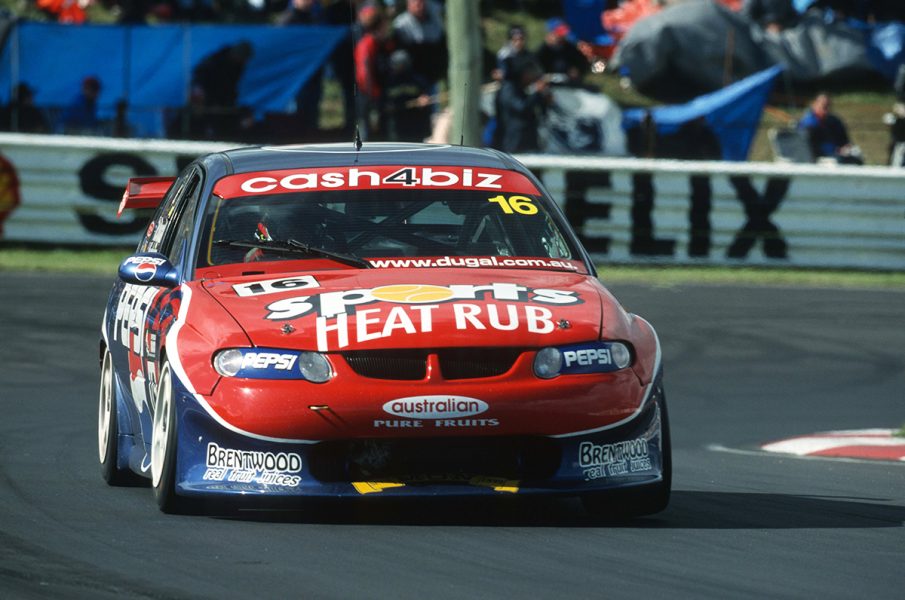 Your Commodore had a new sponsor in 2000, how did the Pepsi deal come together?

We were Pepsi’s largest distributor in country Victoria through a drinks business that we owned and ran. That was part of the reason.

You got your best race finish in Supercars in Canberra that year, going from 24th on the grid to sixth!

No one had been there before and the rules were that you could pit after Lap 1.

We felt we had nothing to gain by waiting, so we just pitted after the first lap – which not many people did – so we had clean space to keep moving up while everyone else was fighting for position and slowing each other down.

By the end of the first race we were sixth! The last race, I started eighth and Mark Skaife was in front of me.

We knew each other because I’d bought a couple of Steven Richards’ Formula Fords, and Skaifey and Jim Richards used to come down and see us after races – Skaifey goes ‘come on Duges, look after me at the first corner!’

I actually beat him to the first corner, which I was pretty happy about! 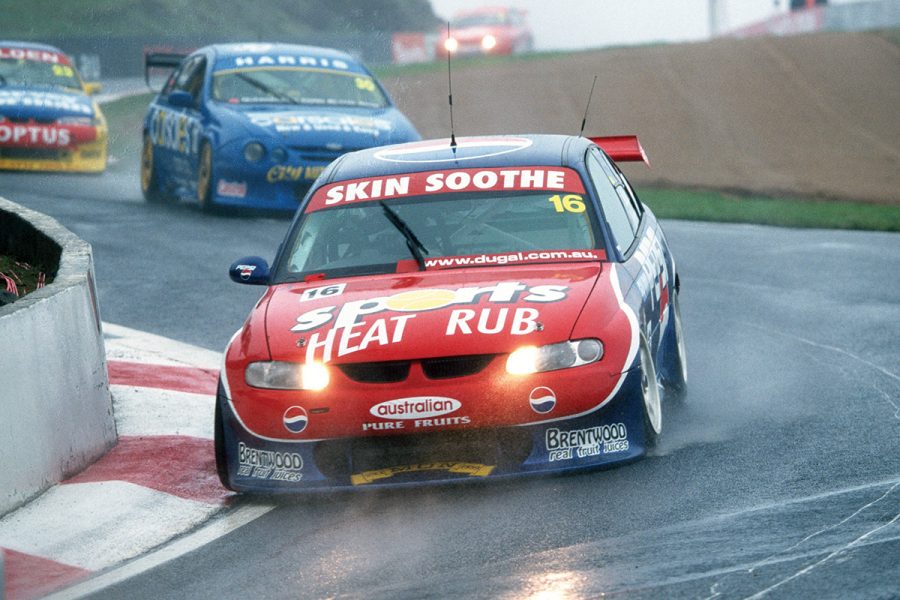 You then ended that year with a top 10 finish at Bathurst with Andrew Miedecke. How satisfying was that, especially given the wet conditions all weekend?

Yeah, that was good. With 20 laps to go we were the car that had done all our pit stops, we were on a fresh set of tyres. We’d have been second on the lead lap once the others had done their pit stops.

When it was wet our car was a rocket. We qualified not so well, but in the rain we just kept moving forward. In Turn 2 regularly I could just shoot up the inside.

At the last stop I was going to get back in, but for whatever reason, to save time I think, we did a splash-and-dash and Miedecke stayed in.

We had a spotter on top of the hill that said the rain was coming. Some of the other drivers came in and got slicks on. Our spotter was saying to stay on wets but the rain never arrived. The wets cooked themselves and we had to make another stop. 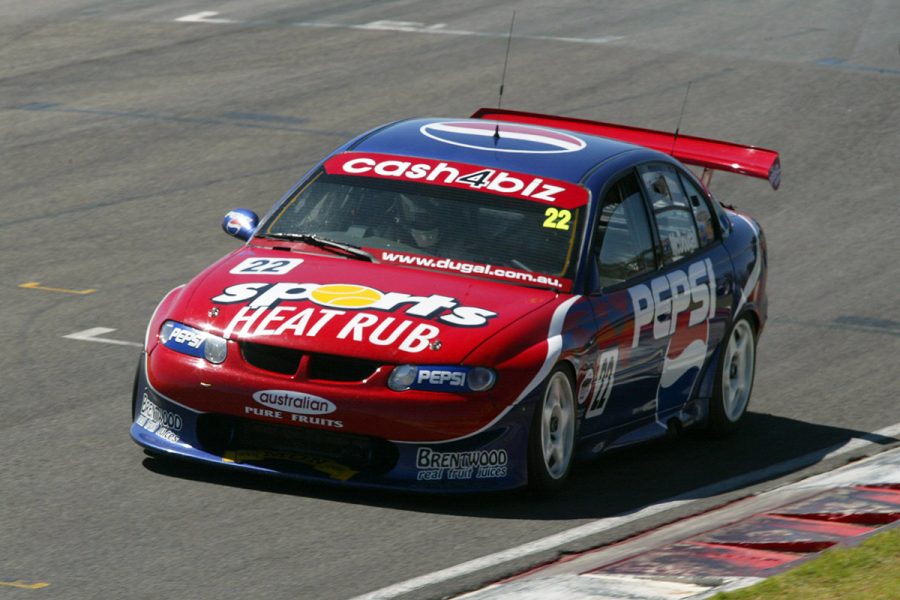 Mallala hosted pre-qualifying for the 2002 Clipsal 500, which McDougall did not escape

You were one of the drivers who had to go through pre-qualifying at times in 2001 and 2002. How tough were those sessions knowing it was go or go home?

I’d actually forgotten about that until you mentioned it!

It was really tough. There was all that effort to go and you were still wondering if you were going to get through. I think there was one round that we didn’t make it in, which was pretty disappointing.

Your last race was at Bathurst in 2002, why did you decide to pull the plug?

There was no absolute reason. I had a young family and a partner that was struggling with me being away as much as I was.

Pepsi wasn’t paying as much as what we were thinking it was going to be. There was the financial pressure of trying to run in the top game with $300,000 to 400,000 when you need a million or more and I was a bit sick of putting my life on the line and taking home $50,000 a year. 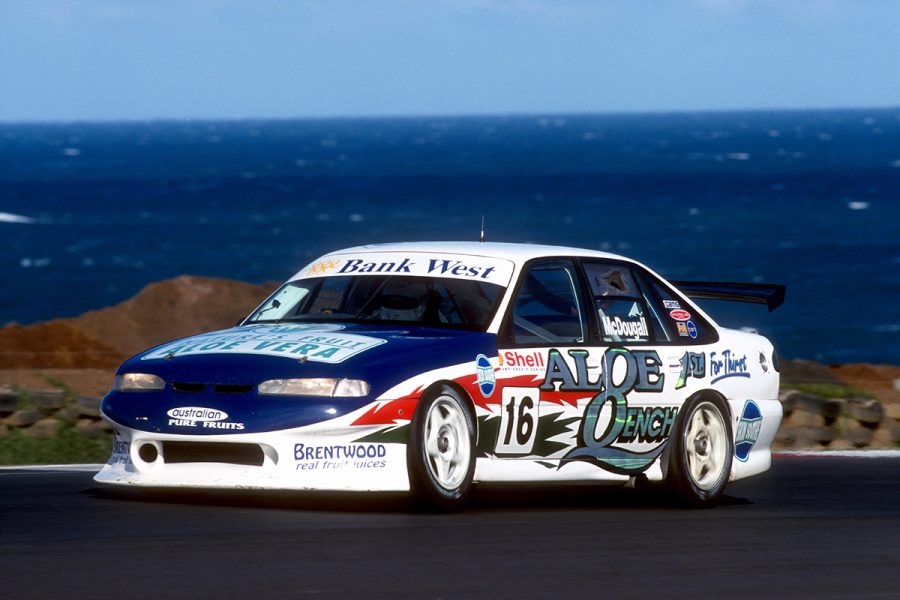 The Aloe Quench Commodore at Phillip Island in 1999, before making headlines

The favourite races would be our near-achievements at Adelaide and Bathurst, those times when we could’ve had a podium finish.

But a fairly proud moment was at Canberra in 2000. I remember being in the driver’s parade.

When a thousand people are chanting your name, it certainly moves something inside you. It’s certainly not something that happens every day!