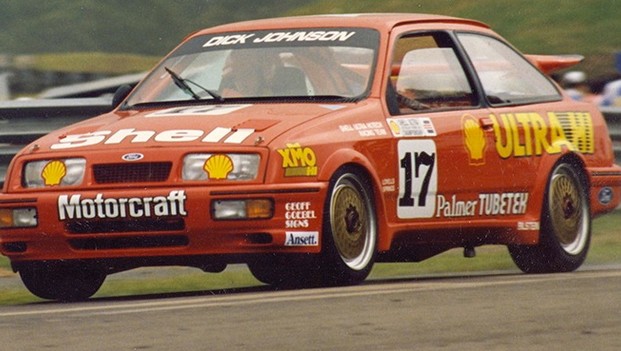 While Saturday Sleuthing has generally revolved around the history and racing lives of modern-day V8 Supercars, more and more of our V8 Sleuth’s email is asking about older cars from the Group A and Group C era that helped pave the way for the V8 Supercars Championship that exists today.

Our Sleuth Aaron Noonan is often asked about the histories of Dick Johnson’s Shell Sierras and a recent visit to Launceston (where a Shell Sierra show car sits in the National Automobile Museum of Tasmania) helped push the topic to the front of his mind.

So what happened to the very first Ford Sierra Johnson first raced as #17 way back in 1987?

It’s safe to say it has been on quite a journey!

The first of an eventual six Sierras built by DJR, the first car (DJR1) was built from a shell sourced from Europe as a right-hand drive car to RS Cosworth specifications for Johnson to drive as #17.

A left-hand drive version was also prepared (DJR2) and driven by the late Gregg Hansford as the #18 entry.

Johnson’s car debuted in the opening round of the 1987 Shell Australian Touring Car Championship at Calder and finished ninth before repeating the result in the next round in Tasmania.

A sparkling run at Lakeside – where he charged to the lead – all came to naught when a turbo popped and both Shell Sierras were pinged for what were deemed illegal turbo wheels. 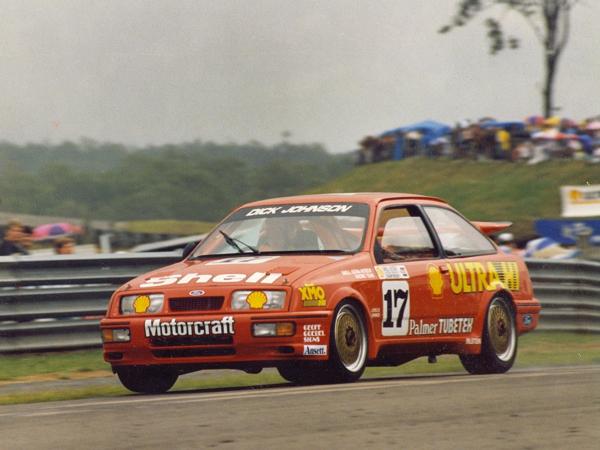 The team reportedly had acquired several unfinished (and thus unmachined) turbo wheels from their manufacturer and machined them themselves, the end result being Johnson suspended for seven days.

He didn’t miss a race and bounced back with a second place at Wanneroo before claiming the first win for a Sierra in Australia at the next round at Adelaide International Raceway.

From there it would be miserable times with retirements from Surfers Paradise (turbo), Sandown (another turbo) and Amaroo Park (you guessed it, turbo!) before finishing the sprint season at Oran Park with a third place on the podium and sixth in the Championship. 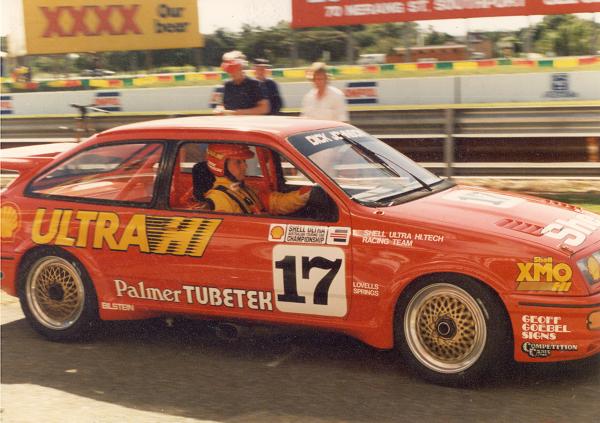 For the endurance season, the Sierra was upgraded to the evolution edition RS500 – in essence it meant an uprated Cosworth engine with a larger turbo and intercooler as well as a range of other changes including re-designed front bumper and rear spoiler.

The endurance races were simply miserable for DJR1 – Johnson qualified it on pole for the Castrol 500 at Sandown but it suffered an engine failure in the warm-up, forcing he and Hansford into the #18 car.

At Bathurst both cars were excluded from the Top 10 Shootout for irregular fuel and Johnson’s car lasted just three laps with differential problems.

The Calder round of the World Touring Car Championship a week later was no kinder as oil pump problems took out the #17 Ford and the trip over to New Zealand for the Nissan Mobil 500 at Wellington also resulted in a failure to finish.

One shining light though was Johnson’s win in the non-Championship touring car race in Adelaide supporting the Australian Formula One Grand Prix. 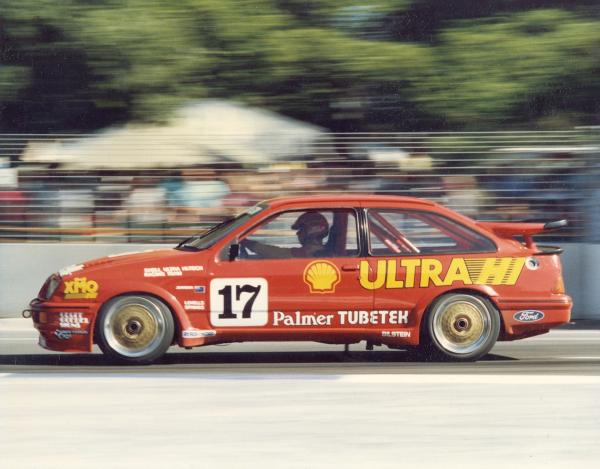 DJR1 became new signing John Bowe’s car for his first year with the team – he won the Winton and Amaroo Park rounds and finished second to Johnson in the Championship as the Shell cars claimed victory in eight of the nine rounds.

The car stayed with the #18 plate for the Sandown and Bathurst enduros, though in the hands of open wheeler aces John Smith and Alfredo Costanzo. 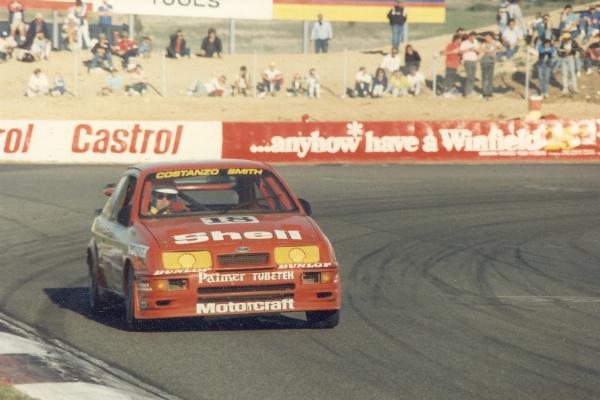 At the Enzed 500 at Sandown it finished a delayed sixth after losing many laps replacing an axle and at Bathurst it was the third of three DJR Shell entries.

In fact, it was the last Shell Sierra left standing and after the failure of the #17 and #28 cars earlier in the race, Johnson and Bowe took over #18 after Smith had driven the first stint and brought it home in second place.

At the end of the season this car was sold to Trakstar Racing in the UK and competed in the British Touring Car Championship in the hands of Brit Robb Gravett in 1989 and then Graham Hathaway in 1990. 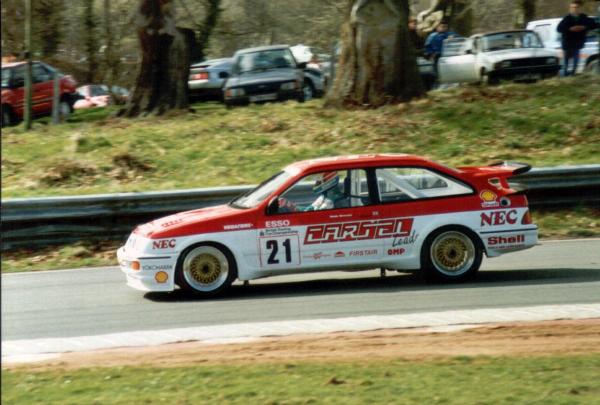 Hathaway then competed in touring car events in Malaysia in the car for a few years before it returned to compete in England.

Current owner Andy Lloyd (who raced a V8 Supercar at Bathurst in 1998) bought the car in 1996 from Lester Stacey and raced it in the Ford Saloon Car Championship in the UK, which he won in 1997. 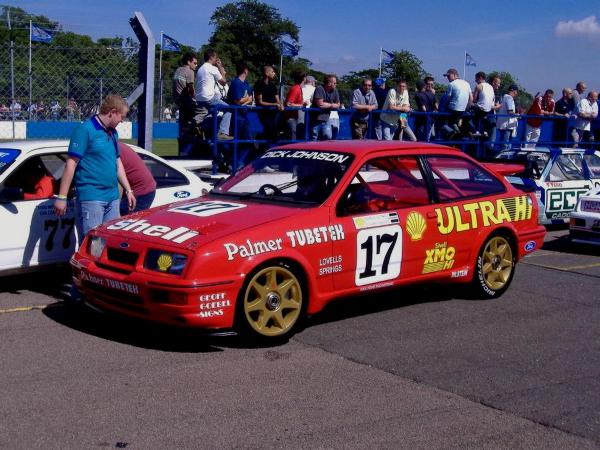 He’s owned it ever since (even running it at Goodwood’s Festival of Speed in 2006 and 2010!) and is a mad-keen DJR enthusiast, even visiting the team’s workshop and meeting Dick himself in 2006. 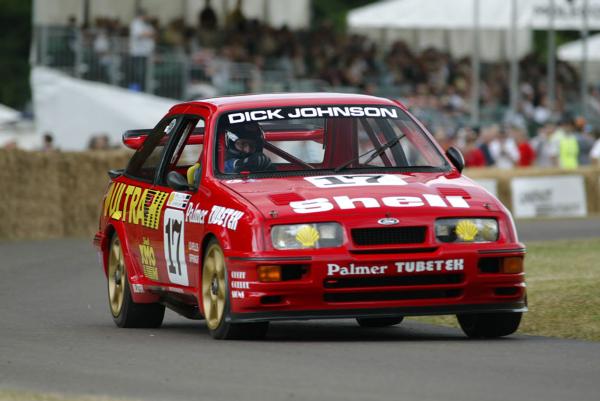 “I first met Dick at Lakeside in 1998 when I was testing for Bathurst and told him the story of why I was there, in short, him!” Lloyd told our V8 Sleuth this week from England.

“He remembered the car well. It was a big part of his career along with the other Sierras. He made us so welcome and took us around the workshop himself. It was obvious he was so proud of what he had achieved. It was Indy week at Surfers and I knew he was very busy but he insisted we went and saw him.”

The car now sits in #17 Shell livery and remains in RS500 specification. Lloyd says it was 99 percent as built by DJR when he purchased it, but he’s since returned it to original and it has all the unique components of the DJR Sierras.

“It’s still the original shell, stamped DJR1, with many battle scars and features. You can find the welds on various areas of the shell and relate them to individual accidents and incidents through its career.”

Lloyd may have raced at Bathurst in the 1998 V8 race (finishing 19th outright and sixth privateer) as well as the 1999 500-kilometre Super Tourer enduro, but he’d love nothing more than to bring the Shell Sierra back to Australia some day and take it to the Mountain.

“I only wish I could have driven my Sierra around the Mountain to get that ‘this is what they felt like’ experience,” Lloyd said.

“Maybe one day if it comes back to the big country I would do a deal that made that dream come true.”

It’s a good time to be highlighting a DJR car too given the team has its open day tomorrow (Sunday July 21) so check out our recent story for the details where you can meet Dick Johnson and the current drivers as well as check out the team’s facility.

Who's the Fittest Driver?

18/07/2013
Stay In The Know
Sign up to the Virgin Australia Supercars Championship Newsletter
We use cookies to ensure that we give you the best experience on our website. If you continue to use this site we will assume that you are happy with it.Ok