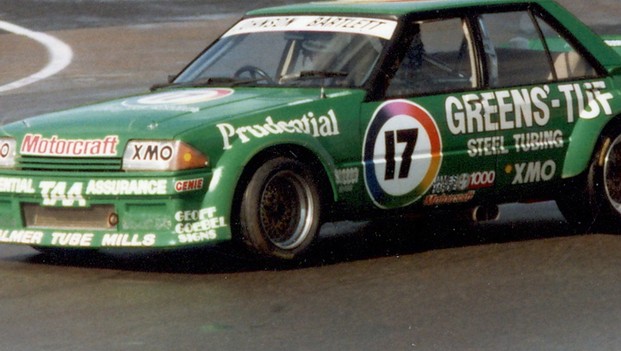 This time next week the Supercheap Auto Bathurst 1000 will be in full swing and the Top 10 Shootout late in the afternoon will decide ARMOR ALL Pole Position for the biggest race in the country.

But 30 years ago, the Shootout – then known as Hardies Heroes – was run on Saturday morning and ended up featuring one of the biggest crashes in Bathurst history. 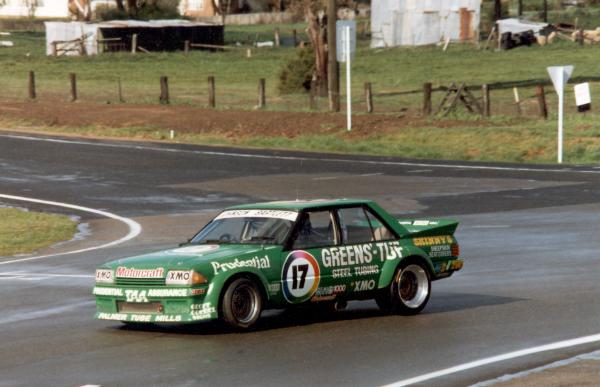 Queensland star Dick Johnson was letting it all hang out in his #17 Greens'-Tuf Falcon XE as he chased pole position for the James Hardie 1000.

He power-slid the big Ford onto Conrod Straight, only to tag the wall with the right rear of the big V8. That pulled the front of the car into the end of the wall, which was lined by a tyre bundle.

That contact broke the steering and when the screaming 351 cubic inch Falcon landed, it spat itself straight off the road at high speed through the trees, destroying itself as it ploughed through the scenery. 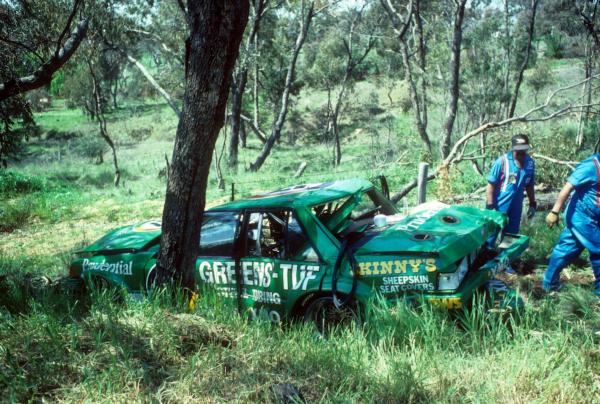 The car was, well, stuffed, and quite how Johnson emerged uninjured from the wreck is a mystery to this very day.

The accident also set off an amazing chain of events that led to Johnson and co-driver Kevin Bartlett lining up on the grid the next day in a replacement car – but more of that later.

So what happened to the car that took Dick on his wildest of Bathurst rides?

The car was actually built a year prior in 1982 for the endurance races, though it ran in blue Palmer Red Roo pipe colours. 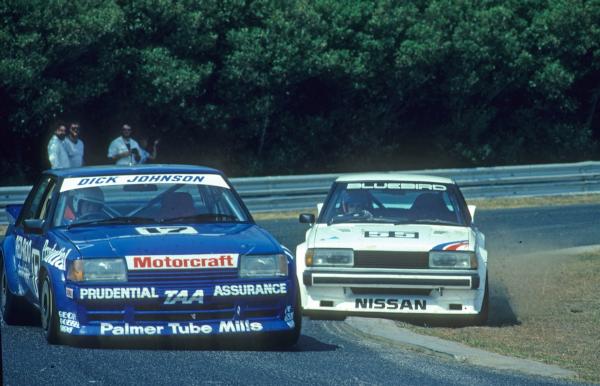 It was the new XE model and replaced the XD that had won Bathurst in 1981 and the Australian Touring Car Championship in ’81 and 1982.

In ’82 the car finished fourth at Bathurst but was excluded for using illegal cylinder heads.

“Any investigation would have proved that the parts we used were indeed legal but we didn’t have the money to fight the charge and copped it sweet,” Johnson wrote in his recently-released autobiography.

For 1983 it was further developed with newly homologated items including larger wheels and tyres and a new, more distinct aerodynamics package.

Johnson finished the 1983 ATCC in sixth place, though the XE underwent a colour change to green and Greens'-Tuf livery for the endurance races, starting at Oran Park and continuing at Sandown and then Bathurst.

The car also had a few extra freedoms allowed under the pre-endurance homologation period by CAMS. The overall width of the car was increased and better American-made cylinder heads permitted. 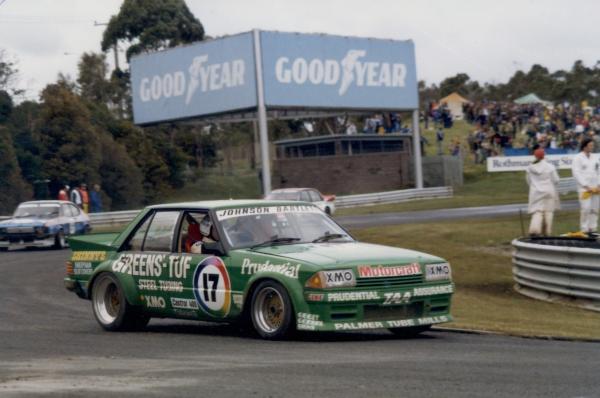 It was also during this transformation into green that Johnson’s long relationship with Shell started as their XMO oils range appeared on the car for the first time.

The accident in Hardies Heroes at Bathurst completely decimated the car, with the crew able to salvage the engine, gearbox – oh and apparently the horn button and ignition key!

But the car’s roll cage held up and allowed Johnson to escape with little more than a cut over his eye, a sore neck and temporary amnesia.

So what happened to the car?

The damaged body shell was taken back to Queensland after the Bathurst weekend and eventually was crushed. 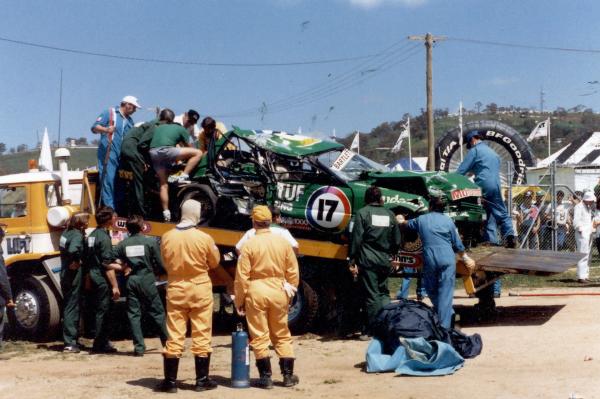 In fact, it was the first car to go through the Sims Metal crusher at Rocklea in Queensland in September the following year and fragments of the leftovers of the car were actually made into paperweights!

The V8 Sleuth has spotted one or two of them pop up occasionally on eBay so keep your eyes peeled for if any of them ever surface – some very unique Bathurst racing memorabilia is there to be had!

Of course, the crashed car was replaced by Andrew Harris’ ex-Bob Morris car for the Sunday after an all-night rebuild saw the salvageable mechanicals from the wreck placed into the Harris car, which was repainted green and had the #17 added to it.

Johnson and Bartlett took up their 10th place on the grid in the car (which still had damp paintwork as it rolled onto the start line!) though would end up retiring after 61 laps due to an electrical fault.

That car, which ironically had been crashed at Bathurst the year prior in Saturday practice and missed the race in the hands of Morris and John Fitzpatrick, was sold to Paul Jones and became the Freedom Fence entry in the 1984 Bathurst race.

It was also actually driven by a very young Glenn Seton at the ’84 Amaroo Silastic 300 endurance race too!

The V8 Sleuth understands a collector in Melbourne retains this car.

And of course then there was the Palmer Tube Mills XE Falcon that Johnson built to replace the destroyed car for the 1984 season.

He finished on the podium at every round of the Australian Touring Car Championship and, despite only winning one of them at Surfers Paradise, clinched his third ATCC crown.

John French returned to partner Johnson for the endurance races, though a broken axle took them out of the Bathurst race – the final one run to local Group C rules.

After its final race at the Surfers Paradise 300 endurance races, the Palmer Tube Mills XE was retired from completion and retained by DJR.

The car now forms part of the Bowden Collection but is regularly on display at DJR in Queensland.

At this week's Supercheap Auto Bathurst 1000, the Ford Falcon of Chaz Mostert and Dale Wood will run a replica of the Greens'-Tuf livery.

Have a car you’d like to know more about? Know where one is?