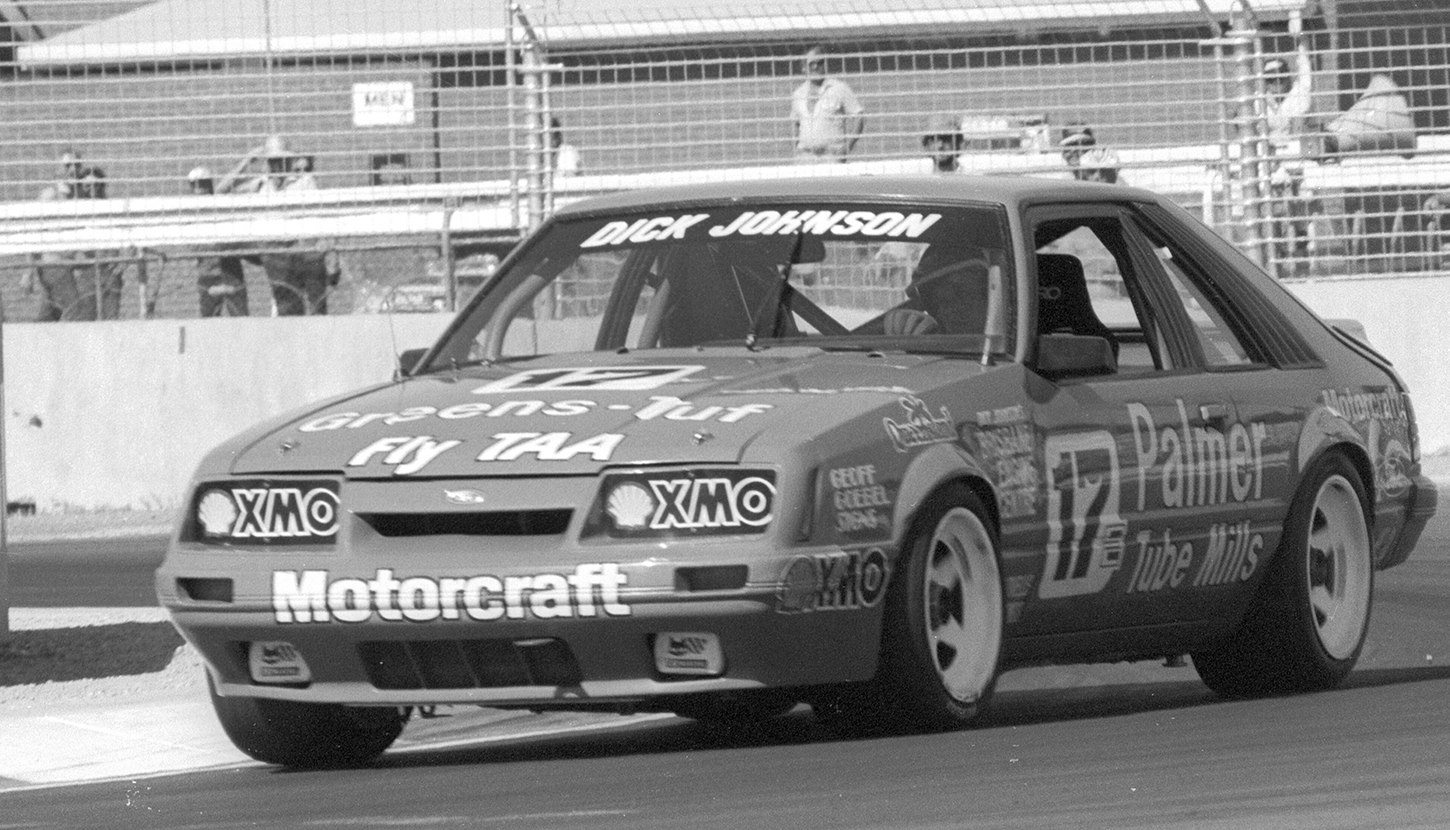 Dick Johnson is a V8 Supercars Hall of Famer and the cars he drove during his illustrious career are just as revered as the man that raced them.

We get huge amounts of email from V8 Supercars fans all over Australia asking about Dick’s old cars and this week we’re answering the wishes of reader Kerry Wilson.

“I loved that period in the mid 1980s when Dick ran the green Mustang,” he writes.

“I remember you doing a story on it a few years ago and I was surprised to learn that there were actually two of those cars that he ran in that time. Could you do a story on the other one?”

Well Kerry, absolutely we can!

As many racing fans will remember, Australia touring car regulations switched from the big wheeled and big winged Group C cars to the Group A ‘international formula’ for 1985.

Dick Johnson shopped the world for a viable competitor bearing his much loved blue oval Ford badge and ended up aboard a Mustang in defence of his Australian Touring Car Championship crown given Ford Australia had no interest in a Group A-spec Falcon.

Johnson found two Group A-specification Mustangs at Zakspeed, the European Ford works team, based in Germany. The cars had been built in 1983 and had seen limited track time in Europe.

While Johnson purchased both cars, only one made it to Australia in time for a brief run in practice at the 1984 Bathurst 1000.

Far from a sign of things-to-come, the Mountain shakedown proved to Johnson that he had a significant amount of work to do to get the car into competitive shape.

Johnson imported two cars into Australia. The first, which we covered in a Saturday Sleuthing story in 2014 ran as Johnson’s famous #17 throughout the 1985 ATCC.

The second car, the focus of this story, debuted as car #17 at the 1985 Castrol 500 at Sandown where Johnson was joined by Larry Perkins, who had recently left Peter Brock’s Holden Dealer Team.

Johnson qualified the new Mustang third on the grid and dominated the race early, gapping the field by three seconds after three laps.

However costly time in the pits repairing a broken rear axle and later ignition problems put the team well out of contention.

Having #18 run as a spare gave Perkins plenty of track-time in the unfamiliar Mustang, though it was always intended to be withdrawn before the start of the race – but not before the team qualified both cars for the ‘Hardies Heroes’ Top 10 Shootout.

Johnson qualified the #17 car third behind the front-row Tom Walkinshaw Racing Jaguars and ran in the top five until oil cooler issues slowed the teams’ progress. An incorrectly fitted wheel, and Perkins’ subsequent limp back to the pits to have it sorted, meant the rest of the day was spent recovering lost ground and they finished seventh.

Johnson and the Mustang finished out the year on a high with pole and a runaway victory at the inaugural Adelaide Grand Prix touring car support race.

The Mustang’s grunt was well suited to the ‘point and squirt’ Adelaide street circuit, though the victory would be Johnson’s one and only win in two years of competing with the Mustang.

The Ford hero continued to use the Adelaide-winning car in the 1986 ATCC, however new competition from George Fury’s Nissan Skyline together with a flying Robbie Francevic in the Volvo meant a lean year for competitive results and Johnson went winless for the 1986 season.

Johnson recruited a new co-driver for the endurance races in former bike ace Gregg Hansford given Perkins had gone his own way and formed his own team. The duo started sixth on the grid for Bathurst that year and #17 ran well inside the top 10 for most of the day, moving further up as the race drew to a conclusion.

The DJR lap scorers had the Mustang crossing the line in third position overall, but the official scorers saw it differently, classifying the car in fourth place.

Either way, it was great result for the Mustang considering its high-tech turbo rivals and the dominance of the V8 Commodores in that year’s race.

DJR switched to the explosive Ford Cosworth Sierra for the 1987 season and the Mustangs were put up for sale.

Our featured car was purchased by Perth racer Ian Love, who continued to race it in select touring car and Sports Sedan races in Western Australia.

Later Johnson purchased the car back and added it to his personal collection which also included the Tru-Blu XD Falcon and Greens'-Tuf XE.

Financial issues in 2007 resulted in the entire Johnson car collection being sold to collector David Bowden and his family and the car remains in the Bowden collection to this day and is often featured on display at the DJR Team Penske workshop at Stapylton in Queensland.

Saturday Sleuthing will return next weekend with the story of a V8 Supercar with a special connection to Barbagallo Raceway as a lead-in to the Perth SuperSprint.

20/04/2016
Stay In The Know
Sign up to the Virgin Australia Supercars Championship Newsletter
We use cookies to ensure that we give you the best experience on our website. If you continue to use this site we will assume that you are happy with it.Ok