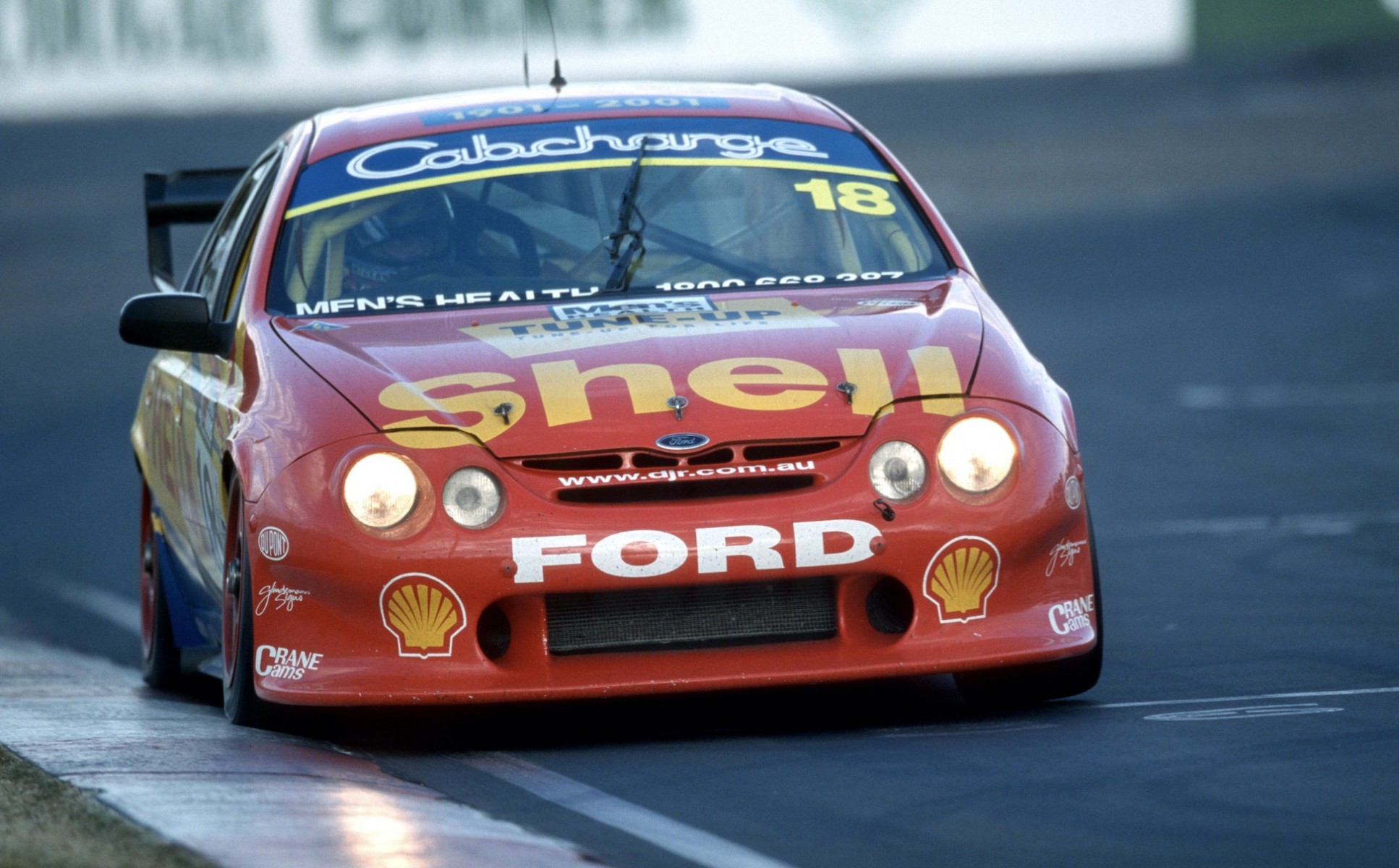 The feedback to the new-look Saturday Sleuthing series of stories has been fantastic since we featured Steve Ellery a few weeks ago - so keep sending through your suggestions of Supercars drivers and personalities you would like to hear about.

This week we’ve spent some time catching up with former Supercars ace Cameron McLean to see what he’s up to thesedays.

McLean, now 50, was a star privateer in two-litre Super Tourers before making the move full-time into Supercars in 1999 with an ex-Dick Johnson Falcon and the backing of long-time supporter Greenfield Mowers. 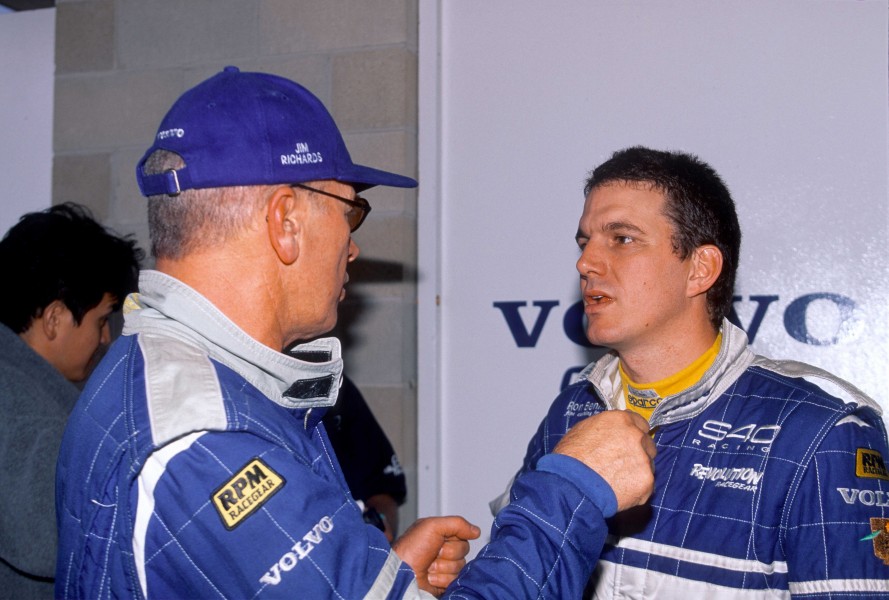 He eventually became a partner in the team - which became Paragon Motorsport - and was a regular in the endurance line-ups covering 1998-2007 with Garry Rogers Motorsport, Dick Johnson Racing, Ford Performance Racing, Stone Brothers Racing and Kmart Racing.

The 1999 Privateer’s Cup Champion in Supercars, McLean last competed in the category at the 2007 Supercheap Auto Bathurst 1000 in the second GRM Valvoline Commodore alongside Greg Ritter - when the duo could very well have snatched a boil over victory.

The obvious question - what are you doing with yourself now?

Basically I’m running McLean Motors Tyrepower here in Brisbane, which is the family business that we turned into a Tyrepower in December 2015 to expand our horizons. I guess you could say I saw Lowndesy (Tyrepower ambassador) on TV, he looked good in their shirt so I thought I’d give that a crack too! 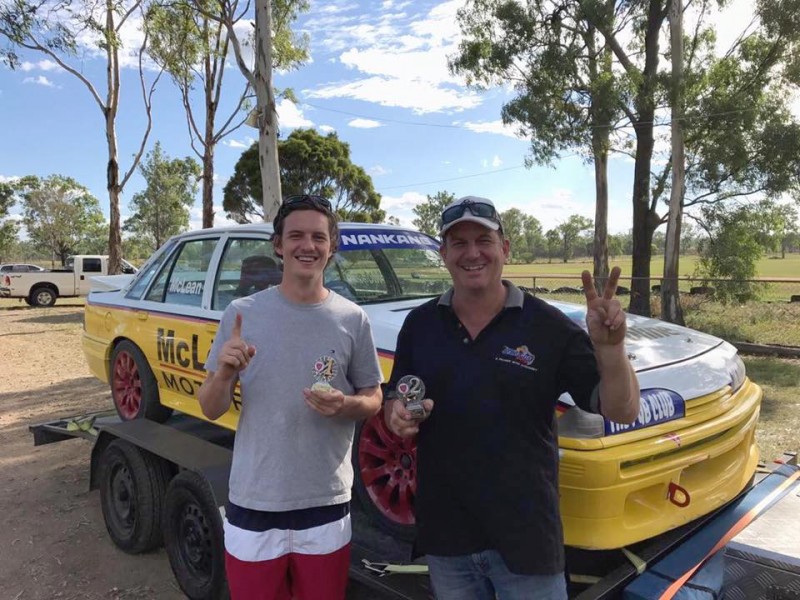 He and I have done some dirt track racing out at Willowbank for the last few years. I did some 300km races in a Mitsubishi Mirage at Lakeside and Willowbank last year too so my career has come full circle. I started in small cars menacing the big cars and now I’m doing it again!

You drove a succession of BMWs and an Opel Vectra in the two-litre series to make a name for yourself - good memories?

They were good times. At the end of the day after the racing was over there was a party every Sunday night. The cars were great. I know race fans either loved or hated them but technology-wise they were fantastic, we just needed a few more of them out there.

We had a great relationship with our sponsor Greenfield Mowers, the late Theo Reinhold (who passed away in January 2014) and all of his guys were great. We had our differences at the end; as soon as you add money to some of these things it can cause a drama. 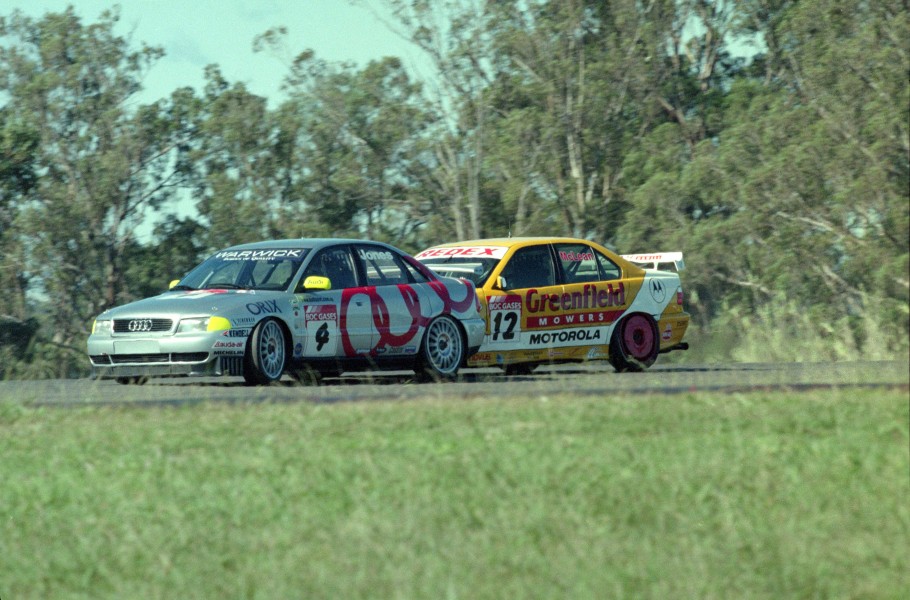 My brother Jason was on our crew, my Dad John ran the team; it was a real family affair in the two-litre days.

How did the move into Supercars come together for 1999? That was the year you won the Privateer’s Cup with an ex-Dick Johnson EL Falcon.

When we raced back then, Greenfields owned all the cars, we prepared and ran them. We sold our BMW Super Tourer to a guy from Sweden after 1998 and there was actually a history with Greenfields to DJR - they used to be based next door to Palmer Tube Mills, who sponsored Dick Johnson for many years. 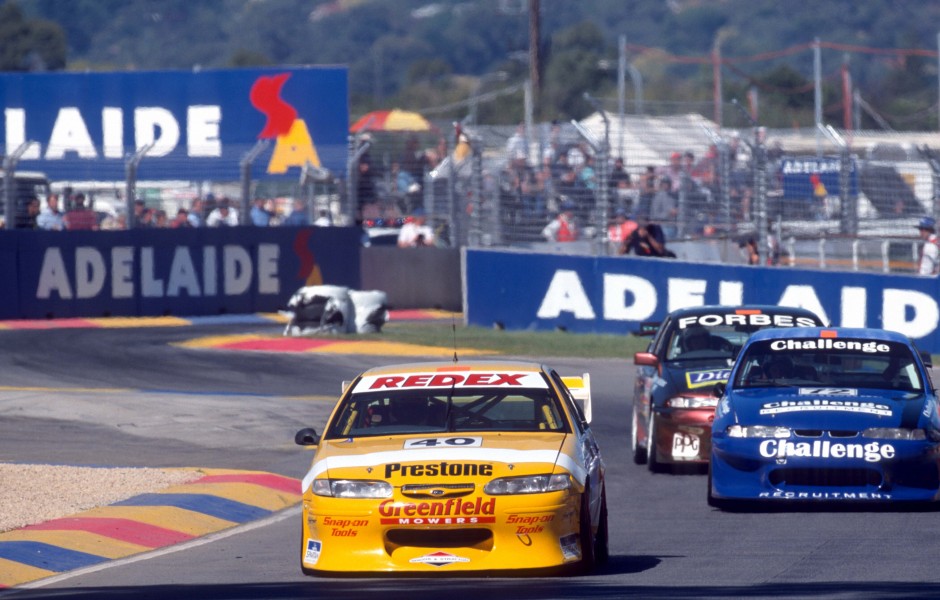 The only problem was that car had run on Dunlops the year before but for ’99 the Bridgestone control tyre came in. They had so much grip you had to change the whole car’s setup and it took a few meetings for us to get our head around it.

We finished sixth in the first race at the Adelaide 500, we had a good result at Oran Park and we were on target to finish in the top five at Bathurst with John Cleland until the front upright exploded at Sulman Park and fired me into the fence.

You and some partners bought out the team in mid 2000 and created Paragon Motorsport - good decision or bad in hindsight? 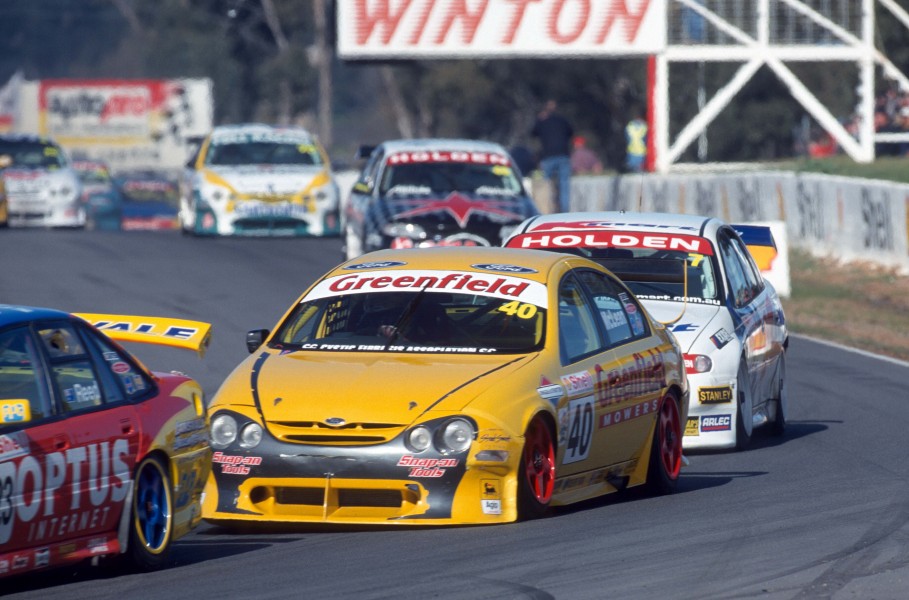 There were four of us - Michael McMahon, Jamey Blaikie and Ross Dillon and we bought it off my old man, who had had enough by that stage. I mortgaged the house to buy a race team - always a good idea isn’t it?! It’s the true test of just how much a racer you really are!

We bought the ex-Prancing Horse car for 2002 and had to spend a lot of money on it. We never really got a handle on that car, it was always a bit heavy. Quinny [Tony Quinn, VIP Petfoods] was a great sponsor and we had good backing but we were still a bit short.

And then Mr. David Thexton turned up and wanted to buy a race team. He had a big chequebook, the timing was right so we sold it to him. I worked for him for a while doing driver tuition and we all know how that went … 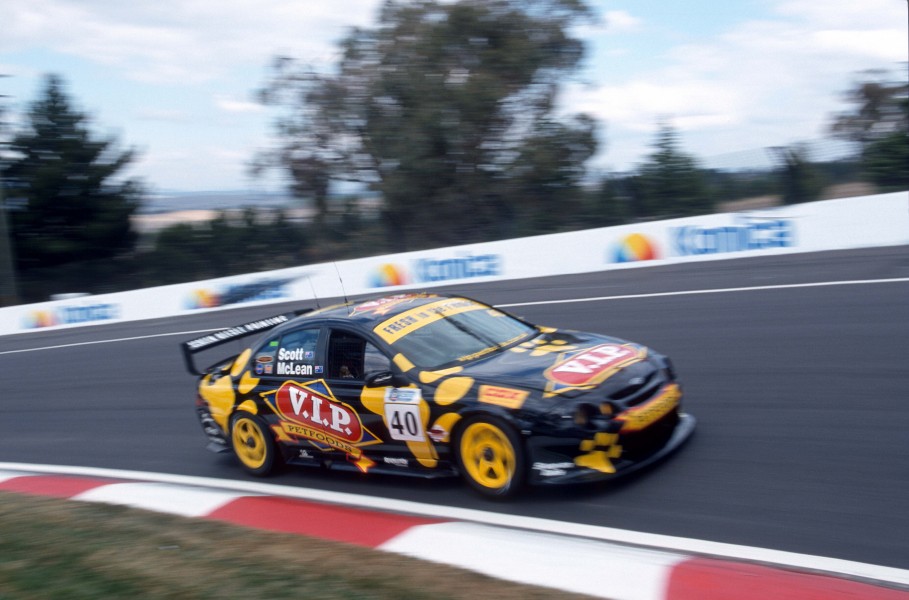 So many people instantly identify you with the yellow Greenfield Mowers cars. You referred to the differences with them earlier; you had a court issue with them and couldn’t race in the 2001 Queensland 500. What do you remember about that?

We couldn’t afford to run the car and we were stretching the budget so we had to go to other sponsors and if we got others we’d move the (Greenfield) signage and put other sponsors on the car. We had an agreement and did what we thought was right - Greenfield came off the bonnet and VIP Petfoods went on, which we thought was OK and part of the arrangement but the car was towed and the rest is history. I don’t think that’s happened to many people before!

I was at work and Neal Bates was getting fitted up for the seat and I got a call saying the car was being towed away and an injunction was put on it in the Bowen Street (Brisbane) courts and we didn’t get to race. I never saw that car again.

You joined DJR for the endurance races in 2000 and 2001 in between running your own car in the sprint rounds - scoring fourth at Bathurst in each year. Was that simply due to a lack of budget for your own team?

Basically it was. We pretty much didn’t have the money to run our own car to the level it should have been so I took a deal to drive with Steve Johnson in 2000. The next year I got Paul Stokell’s seat in the second car with Greg Ritter after the Queensland 500 and before Bathurst.

In 2001 I reckon we were quick enough to win that race - it was the one that got away. We made a stop for tyres and the conditions changed, so we had to come back in and swap back.

I remember standing at the bain-marie at breakfast that morning and Dick (Johnson) asked if I was going to have sheep’s brains for breakfast. He said he had them in 1981 when he won Bathurst, so when he says that, you do it.

I’ll never forget that, it was the first and last time I’ve ever had them! 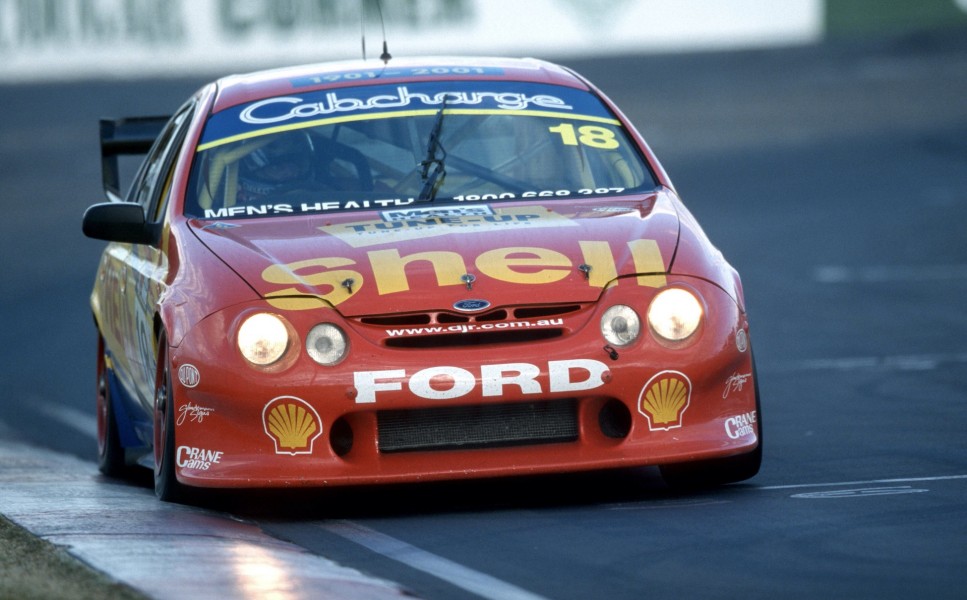 There’s so much we could touch on, but your last Supercars race at Bathurst in 2007 could have easily resulted in an upset win with your co-driver Greg Ritter the only car on wets in the damp conditions late in the race …

My wife Gina nearly divorced me over that one! Every year it had been getting harder and harder to be competitive and Garry Rogers called me and I wasn’t going to do it originally but then I said OK.

I knew it would be my last one - I told Gina the car was OK but the chances of Greg and I winning were slim, so I’d just go there and we wouldn’t bring down the family and go through the whole thing of making much of a deal about my last race.

The next thing I know it’s starting to rain, Ritter is on wets and blitzing towards the front in the final stint and all I can think about is that I’m a dead man when I get back to Brisbane if we win and she and the kids aren’t there!

We were the only ones to put on wets, but as soon as I could see the dry lines from the TV chopper shots, I knew it was done and there was no more rain, so we finished ninth.

The Debrief: Risk, reward, junk and a new winner

29/03/2018
Stay In The Know
Sign up to the Virgin Australia Supercars Championship Newsletter
We use cookies to ensure that we give you the best experience on our website. If you continue to use this site we will assume that you are happy with it.Ok