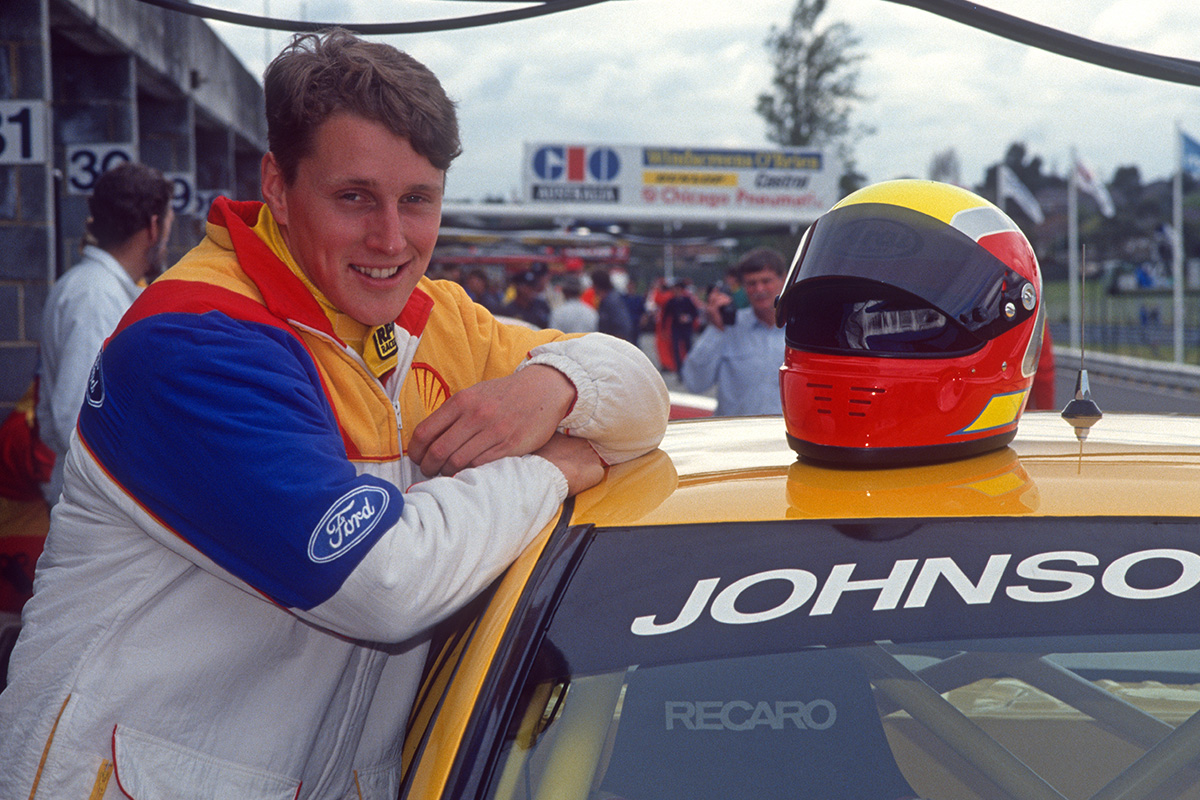 Supercars' young driver revolution in the 1990s can be traced back to Cameron McConville.

At age 14 he became the youngest driver to hold a CAMS racing licence, and was the first driver to really make the leap from Formula Ford success to a Supercars seat – until one high-profile mistake derailed his rapid rise.

McConville spent the next seven years fighting his way back, eventually carving out a permanent place on the Supercars grid.

A multiple race winner, he also possesses a strong Bathurst 1000 record, scoring his sixth ‘Great Race’ podium finish in his most recent start in 2016.

While he can still be spotted trackside at the odd Supercars race, McConville told Saturday Sleuthing that most of his time now revolves around a very different type of motorsport. 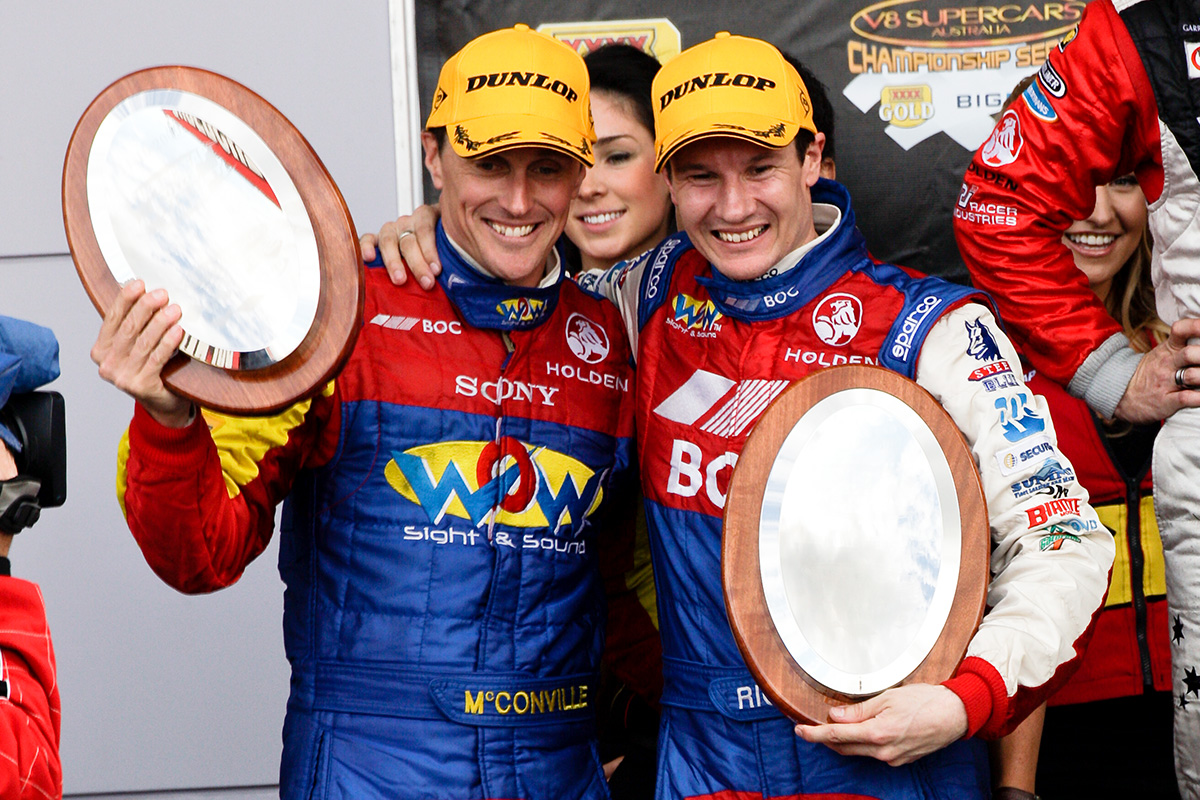 McConville with Jason Richards on the 2009 Bathurst podium

What makes up an average day in the life of Cameron McConville in 2019?

Every day has its own challenges! Unfortunately I'm not doing that much racing, although I'm lucky that I get to have a drive of a lovely Lamborghini GT3 car courtesy of Adrian Dietz.

We did the 12 Hour this year and we're doing a couple of the Australian GT Enduro rounds as well.

My main days are spent as CEO of Ski Racing Australia, the governing body of all high-speed ski-racing events.

The Australian Wakeboard and Water Ski Foundation look after trick skiing and things like Moomba; we're the designated ski-racing authority.

Our season runs September through to May, so I'm just coming off our ski-racing season. It's been a busy last six months. I took on that role a year ago next week.

Well happy anniversary! How did you get into that role?

From when I hung up my helmet, as most people in the sport probably know, I've dabbled in a few different things: media, drive days, I worked for Porsche for a little bit then a couple of years at CAMS with Shannons Nationals and F4.

When I was at CAMS I started to think about potentially leading a sporting organisation.

I saw the SRA CEO role pop up a couple of years ago, but I took a role at Zagame Automotive instead. Then they decided they didn't want to focus on motorsport any further, so I left there late last year.

I was happy taking a breather and taking a bit of time to do some contract work, and then the CEO role came up again.

I wanted to try and get out of motorsport as a nine-to-five job, but ski-racing is high speed water-ski racing, so its effectively motorsport on water. It wasn't like I was taking on a role for equestrian or something that I didn't know much about.

I've always thought I'd like to put an imprint on a sport and take a chief executive role, so this one I thought was going to be a soft landing – but it's been anything but! 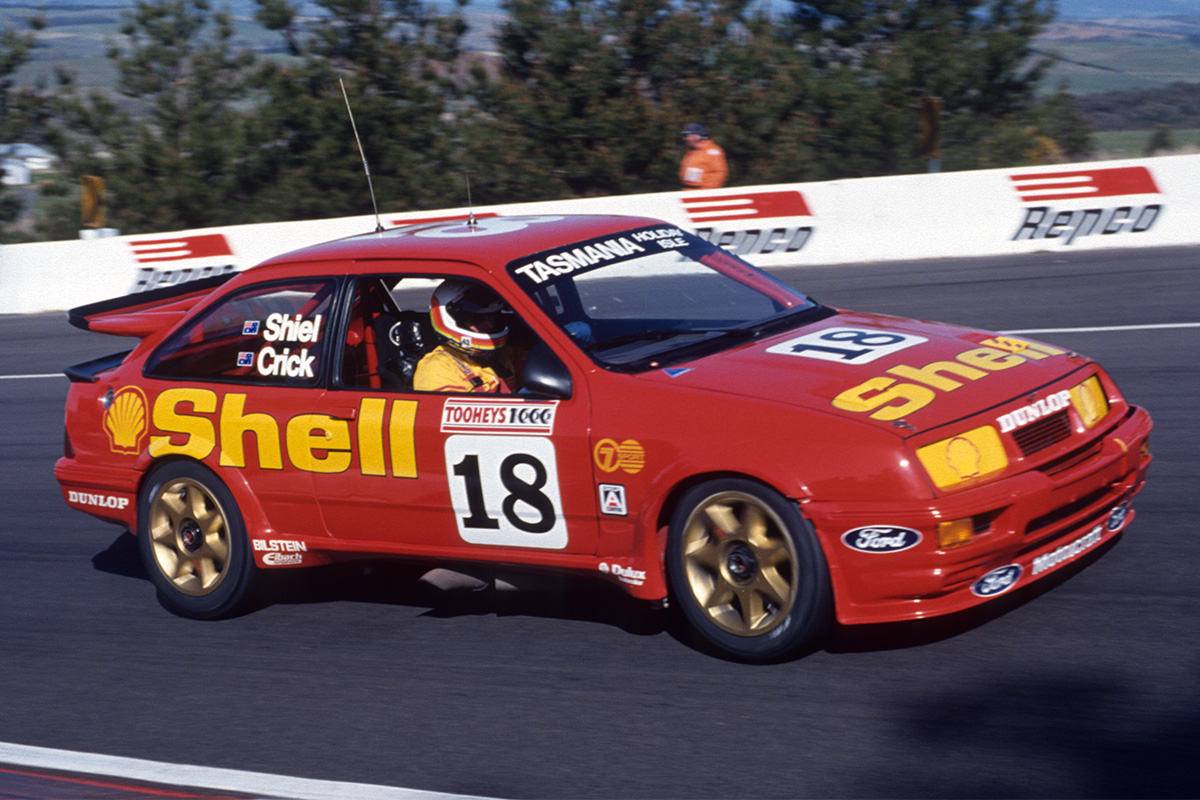 You were the first of the young drivers to come up from Formula Fords into a V8 in the ‘90s. How exciting was it to get that opportunity with Dick Johnson Racing (as a co-driver in 1993)?

Probably more daunting than exciting. Looking back I was really underdone.

I'd come out of a 1600cc Formula Ford, and then I was in a Shell Sierra at Lakeside on slicks as it started to drizzle. I remember doing three laps and coming in because I was petrified.

Then I went to Bathurst as a reserve driver for Greg Crick and Terry Shiel, so I drove the Sierra around the Mountain in practice, and then made my debut the year after.

I was very grateful for that direct link to a professional team straight out of Formula Ford, but it took a long number of years after that to get into the series full-time.

I think it was seven years later that I got my first full-time drive in V8 Supercars. 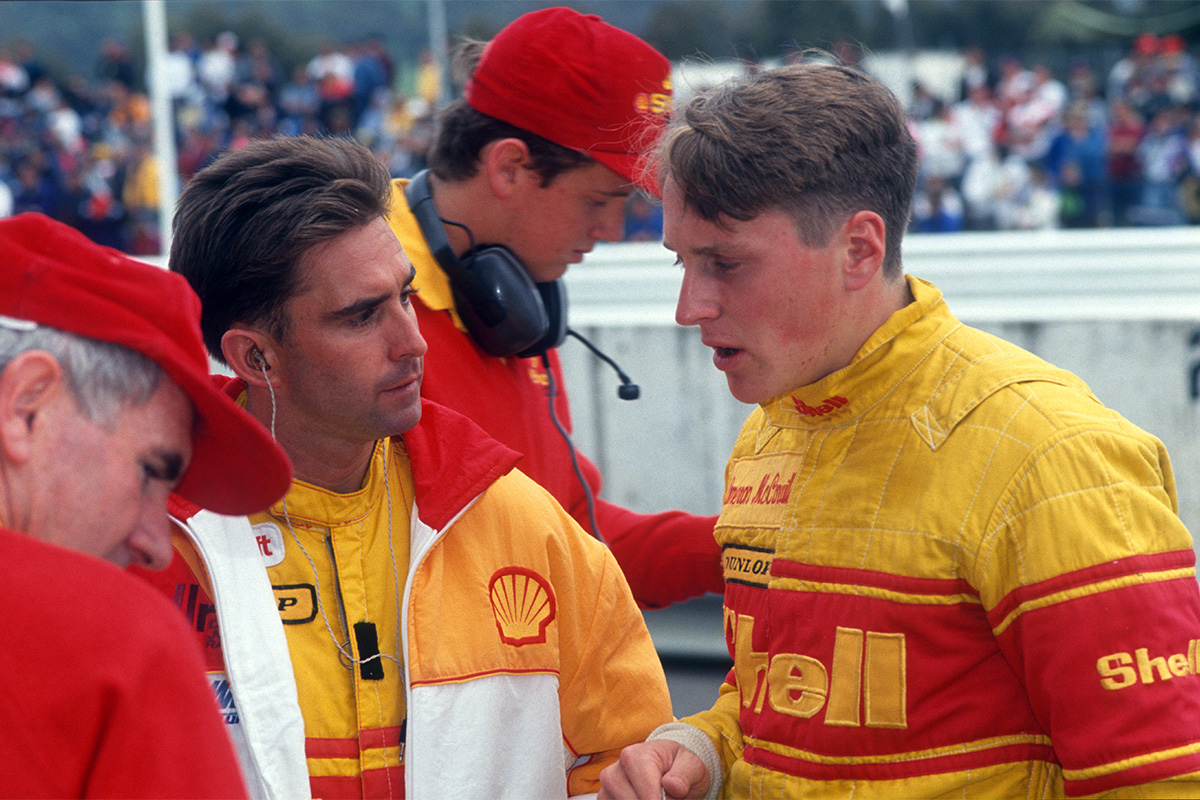 With Paul Radisich at Bathurst, 1993

Was that frustrating, given all the other young drivers like Lowndes, Richards, Bright and co were basically following the path you’d carved out?

Yeah, very. I'd lie if I said it wasn't frustrating, but it was probably self-inflicted. I went to Bathurst (in 1993) and had that quite highly publicised crash across the top of the Mountain.

But when you put it into perspective, it was my first Bathurst 1000 and I was holding down third.

I was one year out of Formula Ford. There was no Super2 or Fujitsu; I basically had three test days of 30 laps each, and then I was at Bathurst, partnered with touring car racing's world champion at the time, Paul Radisich.

You look at it now; no one goes to Bathurst without at least a season – maybe two – in Super2 and having done the Super2 race (at Bathurst).

Yes, it was frustrating that kind of carved the way for them, but they probably did a better job. I didn't. I crashed.

I was fortunate that Super Touring came up, I landed a drive there and had to re-prove myself all over again. 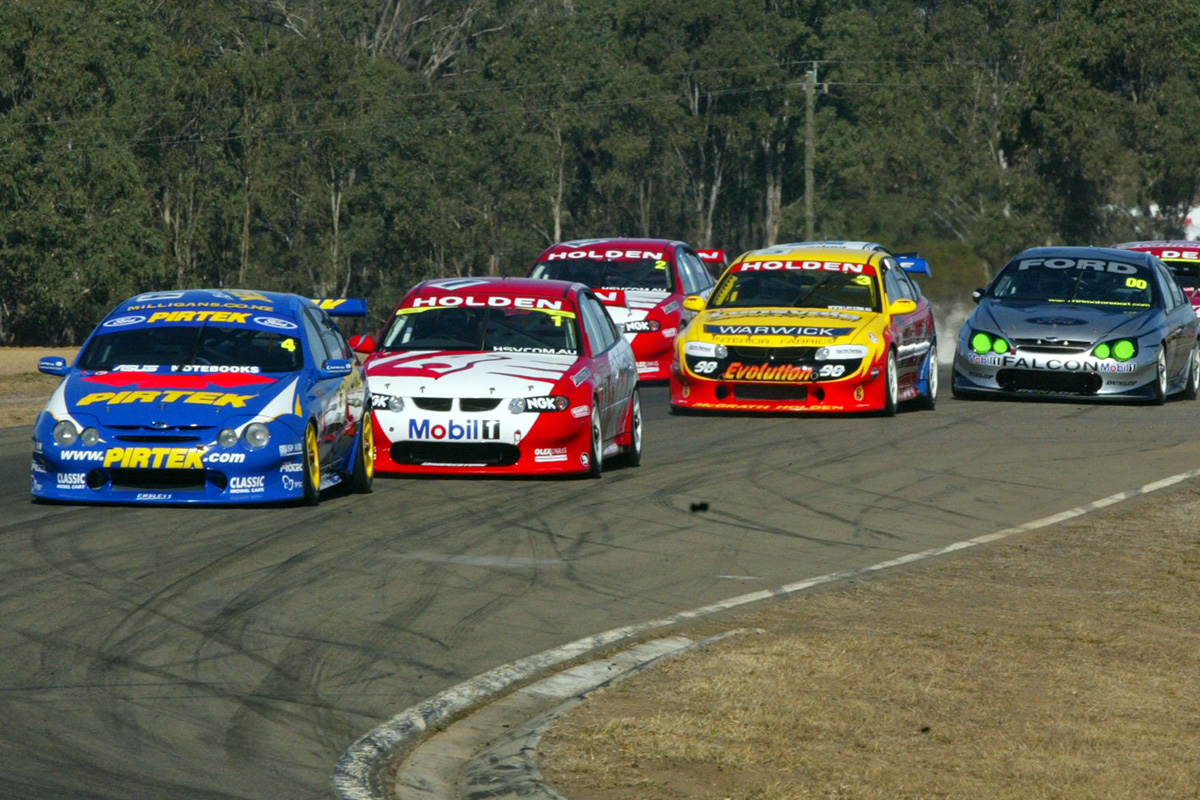 Then when you got that first full-time drive in Supercars in 2000, you had to work your way up the grid. How tough was that to grind your way up?

It was challenging, but I feel like most of my career was that way. I was never really comfortable unless my back was against the wall.

I didn't really expect to beat a factory team, and I didn't expect that the sport owed me a gun drive. I just had to beaver away and work hard at it.

The Lansvale guys were really great to work with. They had some really good visions, but they were running their own business as well. As we know, Supercars teams have to be run as a business in itself.

We had limited resources, but we had Wally Storey and we punched above our weight. I remember qualifying fifth at Oran Park, our home track, being around the Holden Racing Team cars. 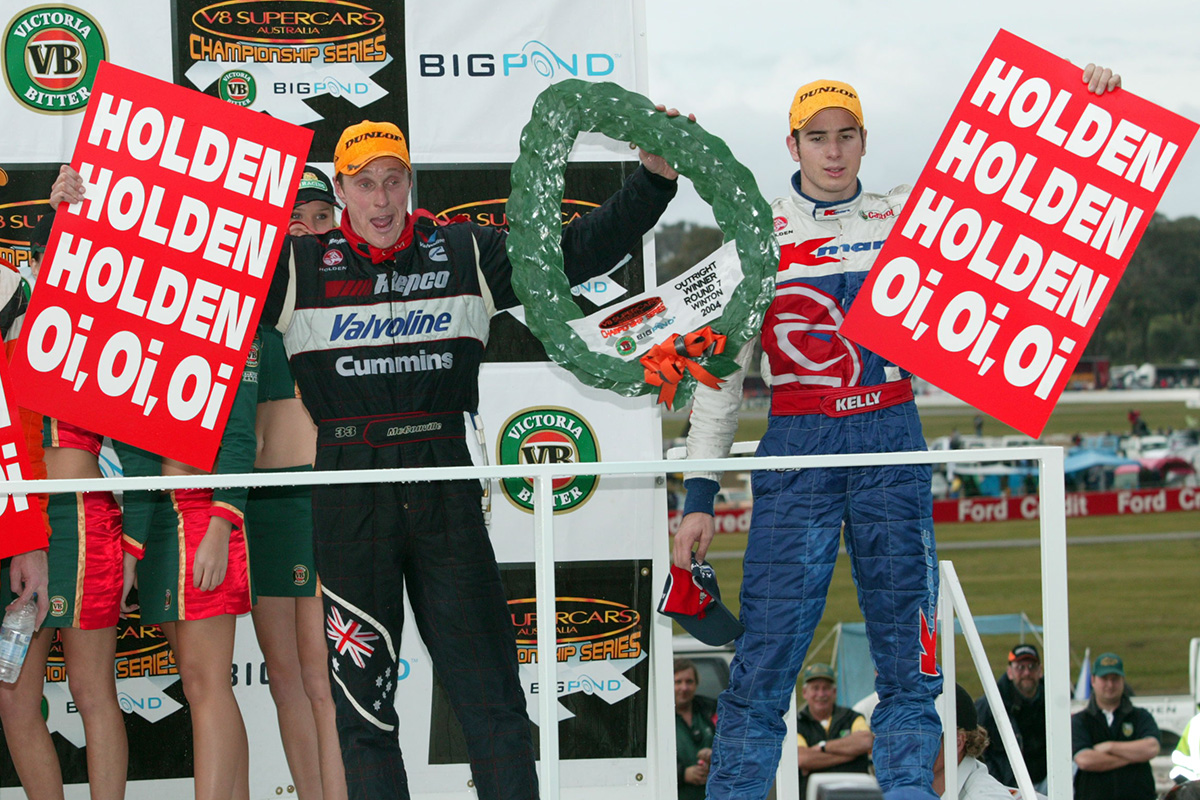 Fast-forward to 2004. In your first season with Garry Rogers Motorsport you claim a breakthrough Supercars race win, mugging Rick Kelly at Winton's penultimate corner. How well do you remember that day?

I remember it very, very well. It's just like it was yesterday, although it was 15 years ago!

I'd qualified ninth and Garth (Tander, teammate) was on the front row.

Qualifying was never my strength but my race pace was generally better and I was able to race forward. That was certainly my strength as a driver throughout my whole career.

Greg Murphy slipped off on some mud so suddenly I found myself in second with Jason Bright behind me. I was actually quite happy with that! I thought 'this'll be a great day, on the podium!'

It was never a planned lunge on Rick at that corner at all. It was just by chance.

I remember where Rick's brake lights came on. It was just so early. I half went down the inside just so I didn't hit him!

Then, as I got quarter of the way down, I thought I may as well try and make this stick… 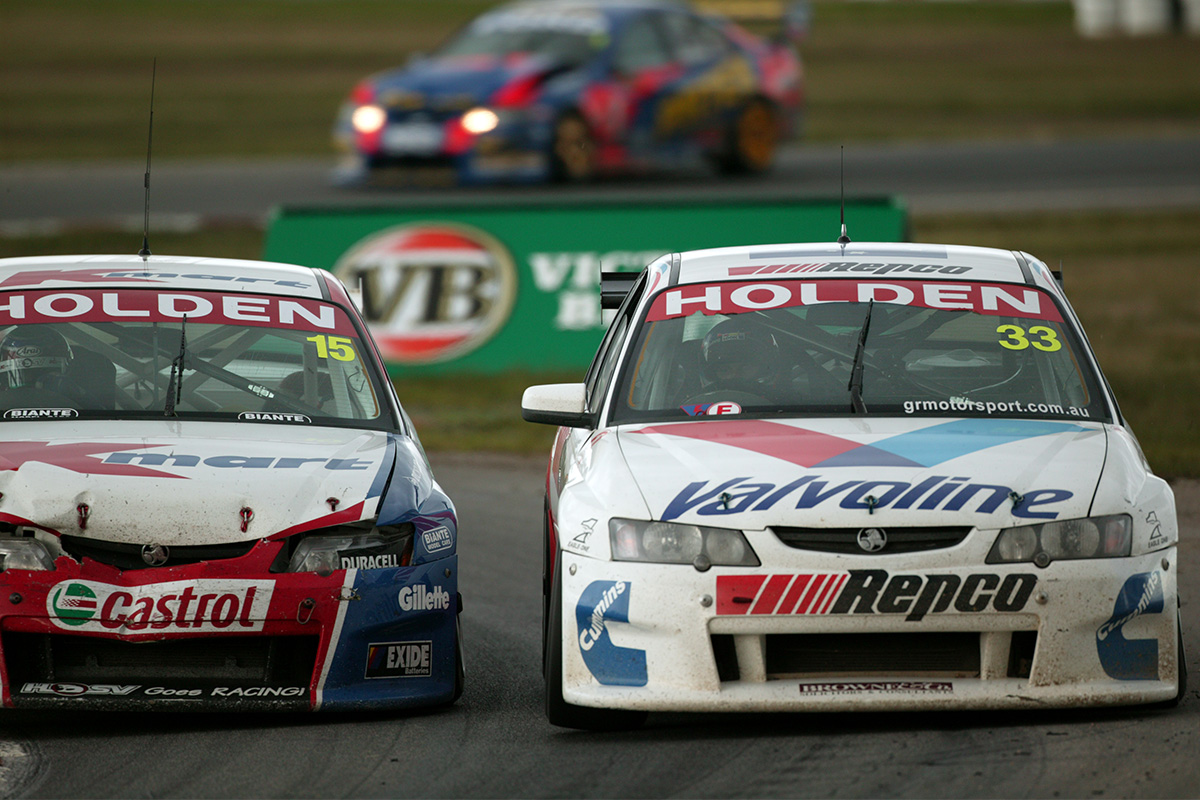 When do you believe you were at your best as a driver in Supercars?

I was probably at my best around then. I still don't think I'd lost anything when I stopped at the end of 2009. I was only 35, and I reckon you peak in your low to mid-30s.

I think the confidence got knocked out of me a bit in my two years at Supercheap (PWR Racing), which were just terrible, there's no other way to put it. Drivers are very confidence-based, and I think I got some confidence back at BJR.

I was always worried about life after, for probably the last five years. I started co-hosting at Channel 10, I managed the HSV Drive Days which was 30 events a year, plus racing.

I was never home. That took its toll on my young kids. It's when all those distractions start that you start losing your focus.

I don't think I ever slowed up or lost it, as such, as a driver. I just had too many distractions going on. I started having one eye – probably two eyes – on life after and that probably cut my career a couple of years short, in hindsight. 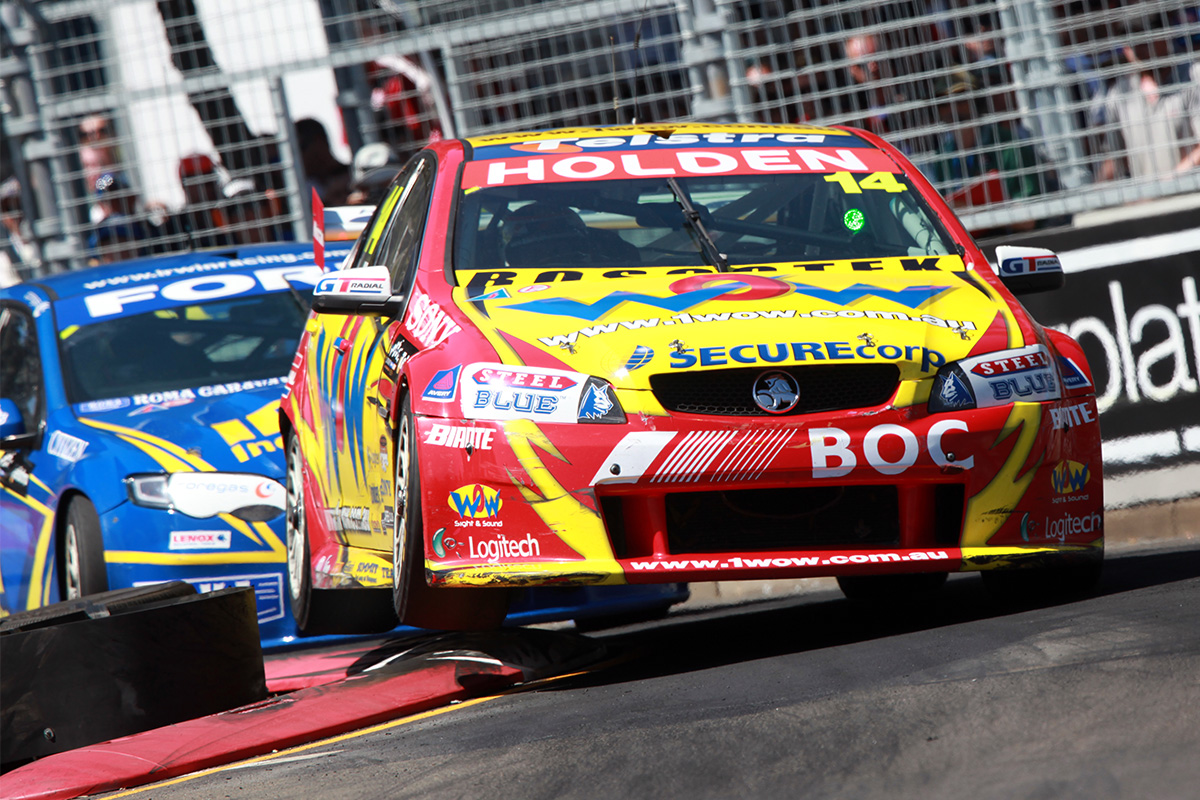 You have a quietly impressive Bathurst record; six podium finishes, including a pair of second placings. Were there any that you felt were potential wins that got away?

For sure, one stands out. It was one where I didn't finish second or third; I finished fourth with James Courtney in 2012.

I handed the car back to him for the last stint in third place. I remember he dived up the inside – in a very Jason Richards-style move – down at the Elbow to move up to second.

There were probably about 19-20 laps to go – so still a while to go – and he started setting fastest sectors.

James was just driving out of his skin. He was catching Jamie Whincup hand-over-fist.

I remember looking over at the Holden Motorsport manager in the garage, Simon McNamara, and giving him the wink: 'finally we're on, I'm gonna win this thing.' I had my fingers crossed under the chair.

And then he reported a vibration in the back. The right rear tyre had started to delaminate 12 laps from the end. He faded to fourth.

We had a really quick car, and James was just … all the planets aligned that day. I thought that one was a win that got away. 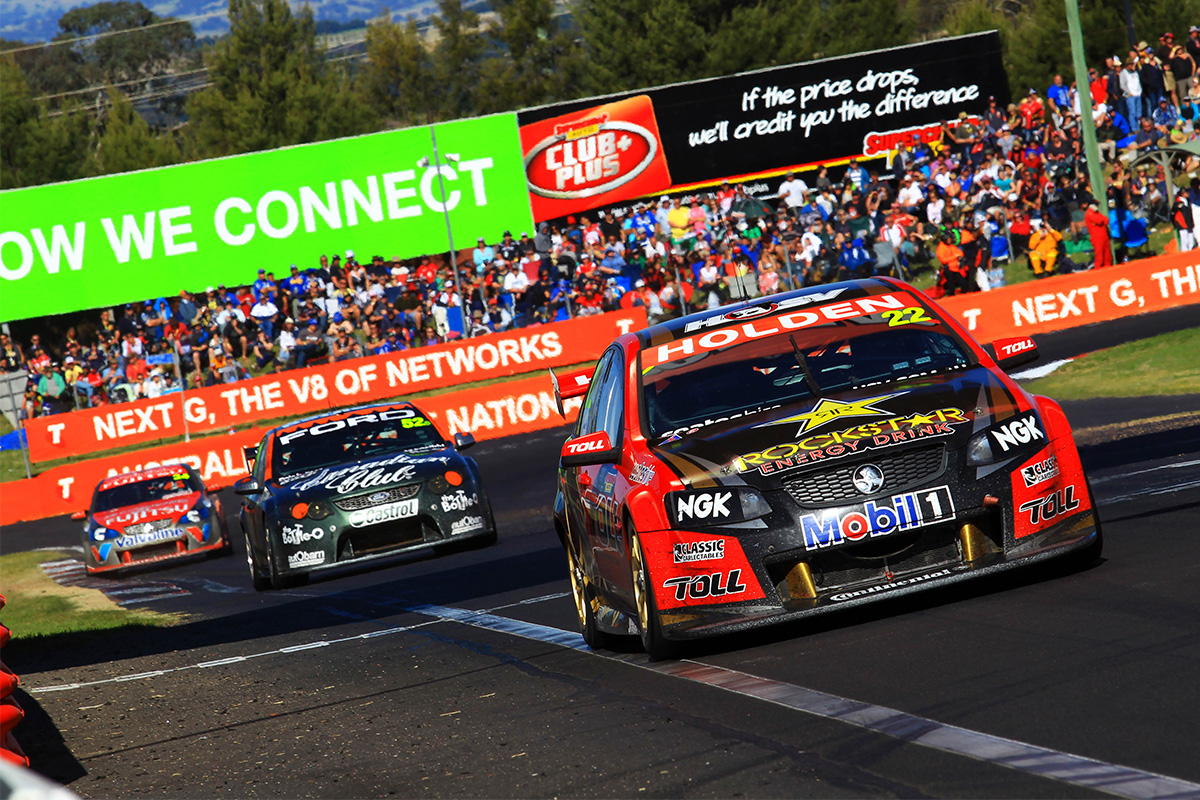 And I guess with JR in 2009, we finished in second place, less than a second behind Garth Tander and Will Davison.

My kids were only three or four then, and I remember the night before the race – and I never get cocky – but I rang them and said: 'Daddy's going to win Bathurst tomorrow.'

Jase had put it on provisional pole, I felt really comfortable in the car … I just thought we were a red-hot chance.

Anyway, we were second. Jase was catching Garth, for sure, and was right on his tail. But trying to pass Garth for a Bathurst win? It wouldn't have been easy…

Your last trip to Bathurst as a co-driver netted a podium in 2016 with Nick Percat. Would you consider an Enduro Cup gig if one came along now, or is that chapter of your career pretty much closed?

Realistically, I think it's closed. The ego in me thinks that I could still do it – and I still keep fit because I've always kept fit – but I'm not doing a lot of miles (in a Supercar).

I'm probably off the radar. I don't go to as many events. I've had an ambassador role with Timken the past couple of years, so I've been turning up and doing that (otherwise) I prefer to go when I'm racing.

I still think I could be competitive as a co-driver, but my job and lifestyle means I probably don't have the time to commit to the level it needs these days.