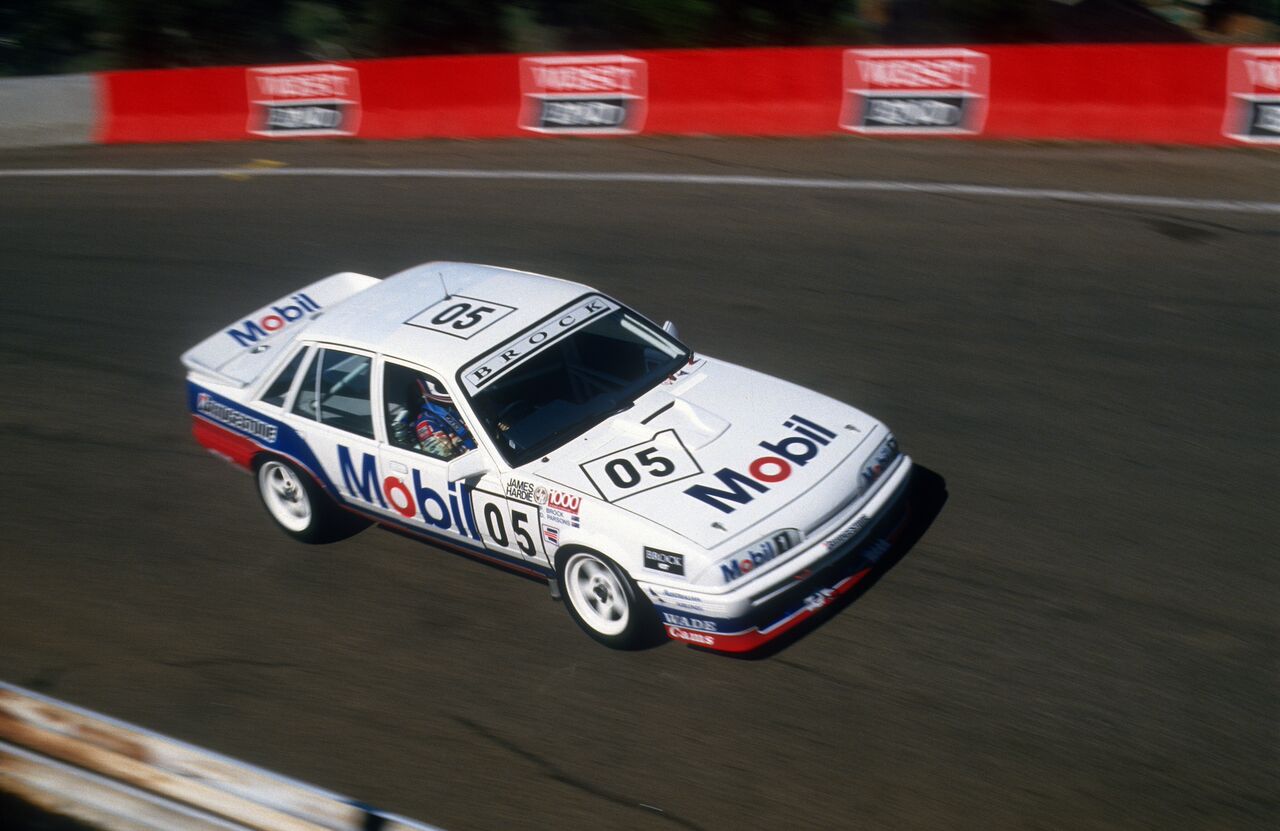 This week on Saturday Sleuthing we’re going to take a look at a special car in Peter Brock’s career, his 1987 Mobil HDT VL Commodore, one that was significant for a range of reasons.

Put simply it was the car that marked the end of a long era with Holden for Brock, the final race car produced by the famous Holden Dealer Team.

It was also a car that ended up on the other side of the planet in the years that followed before finally coming back home to its place of birth.

After 18 consecutive years behind the wheel of the General’s product, this VL Commodore represented the end of a winning association that began with the Monaro GTS 350 and worked its way through Toranas XU-1 and a plethora of Commodore models.

The Brock and Holden relationship was one that, come early 1987 when the two spectacularly parted ways, had taken three Australian Touring Car Championships and eight Bathurst 1000 crowns.

The ’87 season was one of great turmoil for Brock and his HDT Racing organisation after a very public split from Holden.

Heading into the season he still had the support of key sponsors Mobil and Bridgestone and the opportunity of the newly created World Touring Car Championship with local rounds at Bathurst and Calder.

All up, HDT Racing put together three brand new VL Commodores across the 1987 racing season.

The first was intended to be Brock’s new car to debut at the first round of the Australian Touring Car Championship at Calder but was sold to very-recently-departed HDT pilot Allan Moffat to raise much needed funds to keep the now privateer team afloat.

Moffat, together with fellow HDT refugee John Harvey achieved a special place in the history books with the car when they claimed victory in the opening round of the World Touring Car Championship at Monza.

The second VL debuted in Brock’s hands at the Surfers Paradise round of the ATCC and was later shipped to Europe and competed at the Spa 24 Hour race in Belgium before returning to claim victory at Bathurst as the team’s #10 ‘back up’ entry.

Often referred to as HDT 17, the third and final VL was the last Holden Commodore racecar built by Brock’s HDT and is the focus of today’s Saturday Sleuthing story. 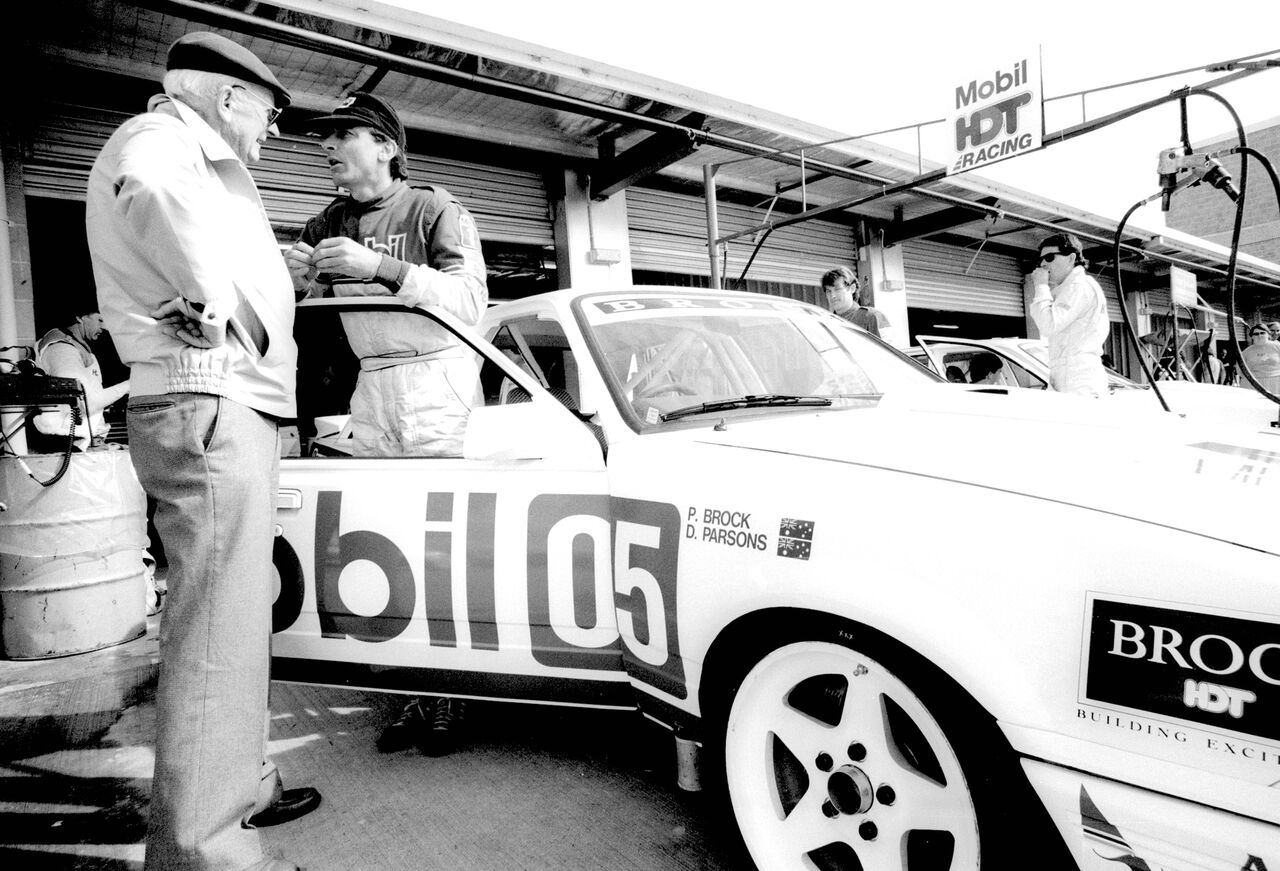 This car had a very brief life in Brock’s hands, debuting in the Pepsi 250 endurance race at Oran Park in Sydney in August 1987 with Brock and David ‘Skippy’ Parsons sharing the driving duties.

They led until an adjustment problem with the race harness during a pit stop forced Parsons to drive with the seat in Brock’s driving position, delaying their charge and resulting in a second place finish to Jim Richards’ BMW M3.

The duo also raced this car at the Castrol 500 at Sandown, the traditional lead-up race to Bathurst. However brake problems late in the race sent Brock spinning off the road and into retirement.

Despite appearing at Bathurst with no Holden support, Brock qualified the #05 car 11th among a top-notch field of factory Ford Sierras and BMW M3s imported from Europe given the race’s World Championship status.

A strong early run very quickly turned bad as Brock pitted on lap 31 of 161 and handed the white Commodore over to Parsons, who returned to the pits just two laps later when the engine in #05 expired. 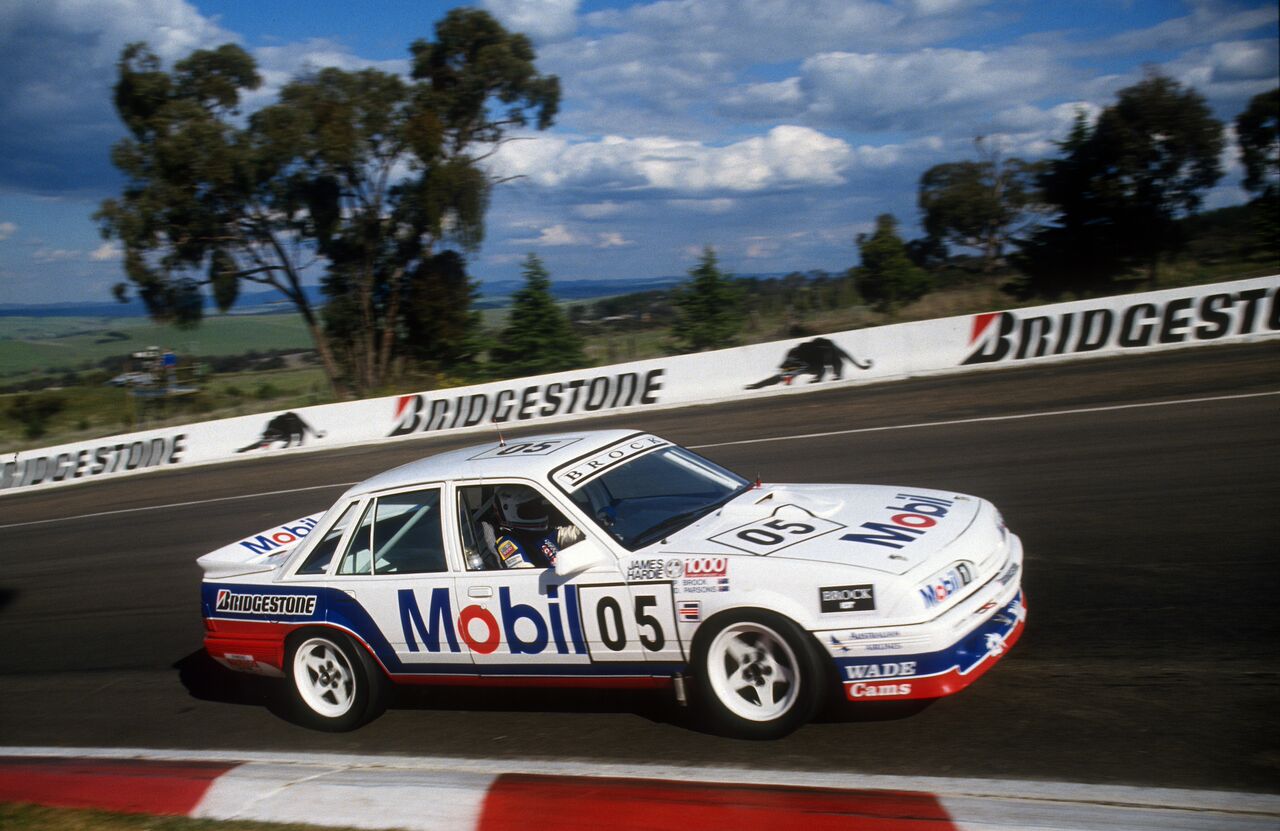 Famously, Brock took over the team’s second car and, together with Parsons and Peter McLeod, finished third on the road. This was later elevated to victory when the top two finishing Ford Sierras were excluded.

This was be Brock’s record ninth and final victory in the October Bathurst classic – a mark that still stands to this day. 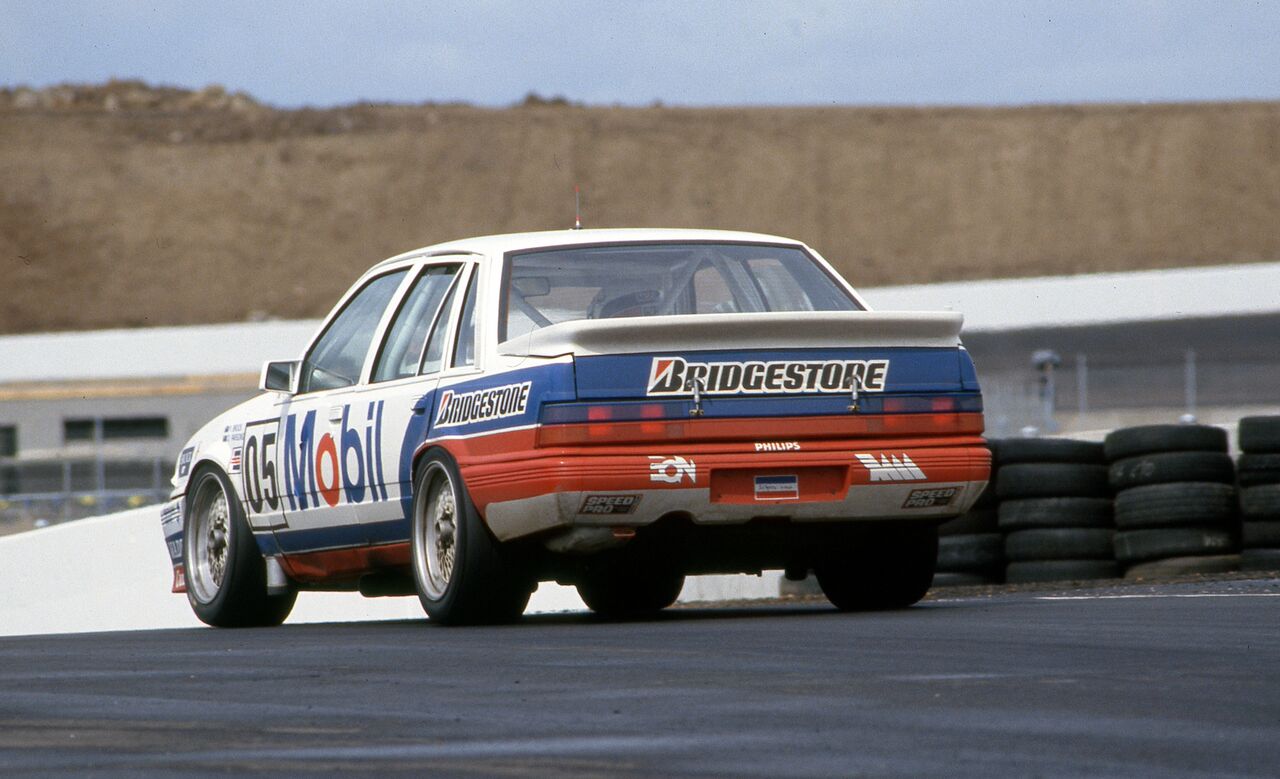 The lead #05 car was repaired in time for the following weekend’s WTCC round at Calder Park in Melbourne on the combined road and Thunderdome oval course. Again more seat issues plagued the pair and they finished eighth before running home fifth in the WTCC Wellington 500 in New Zealand.

Brock’s farewell to the Holden/HDT era of his career came at the ’87 Adelaide Grand Prix where he duelled with former teammate Larry Perkins for the lead before eventually retiring in the warm conditions. 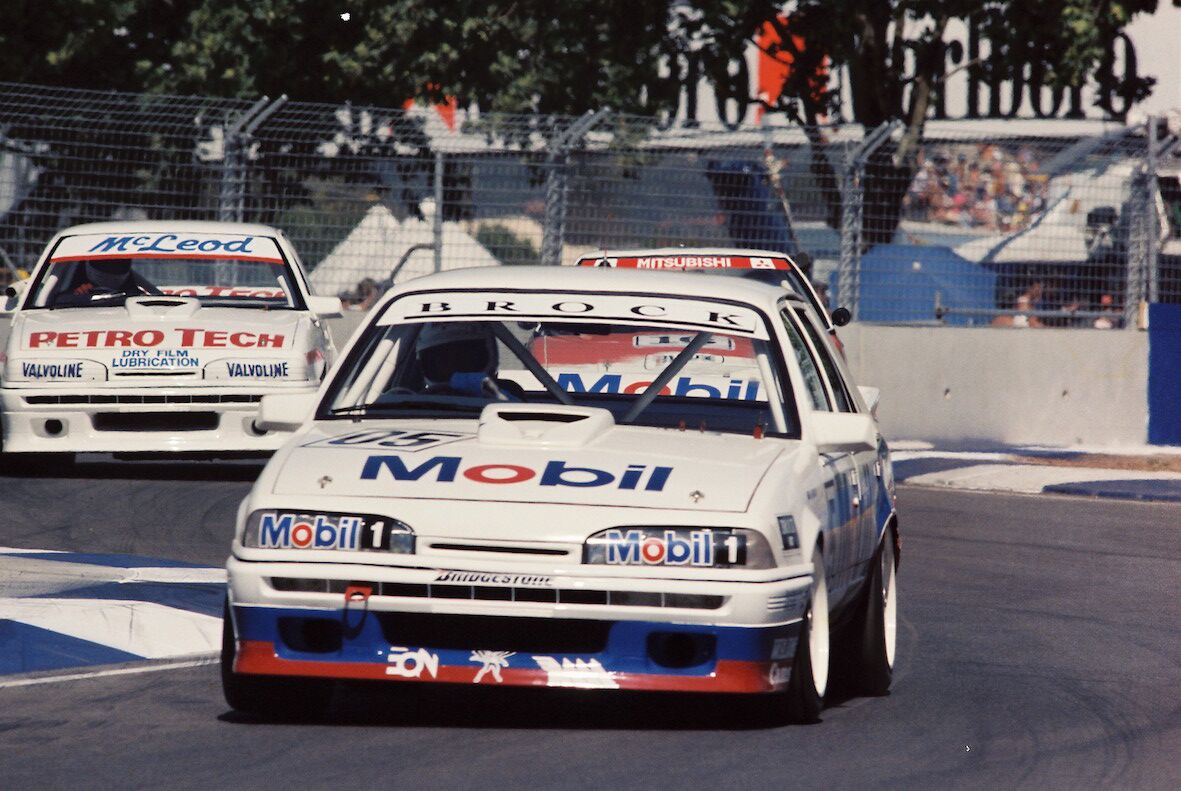 For 1988 Brock’s team switched to racing the small and nimble though underpowered BMW M3s and all of the team’s Commodore hardware was put up for sale.

So widespread was the appeal of the last HDT built Brock race car that the #05 version was sold to England and competed in the British Touring Car Championship in 1988 run by expat Aussie Alan Docking for British driver Mike O’Brien.

This very car was updated to the new-for-1988 SV Group A VL specification – completed with Walkinshaw-inspired body kit and fuel-injected engine – and actually was the first Commodore in the world to run in his specification, even before the HSV factory cars in Australia or Walkinshaw’s own Herbie Clips car in England.

Eventually the car was tracked down in England, returned to Australia and restored to its 1987 specification and Bathurst livery.

In fact, it took pride and place in a unique father and son challenge race at the 2002 Australian Grand Prix at Albert Park as Brock and son James raced the VL against the Sierra of Dick and Steven Johnson.

Today this significant car in Holden, Brock and HDT history is owned by high-profile Brock car collector Peter Champion and remains on permanent display in ‘Brock’s Garage’ in the motorsport precinct at Dreamworld on the Gold Coast.

It was part of a special display created by Supercars to celebrate the Bicentenary of Bathurst at last year’s 2015 Supercheap Auto Bathurst 1000.