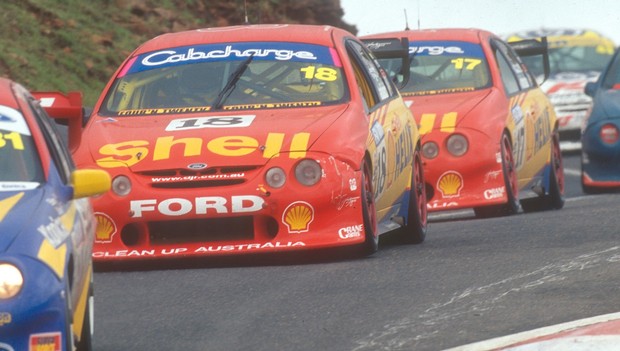 He only drove once for Dick Johnson and very nearly pulled off a Bathurst victory in 2000. But what ended up happening to Brighty’s Shell Helix Falcon?

Jason Bright is now a firmly entrenched member of the Albury-based Brad Jones Racing squad in the V8 Supercars Championship, but 13 years ago he was in the middle of chasing his dream in America.

Today on Saturday Sleuthing we rewind back to 2000 as Bright aimed to make IndyCar – and in the process made a one-off start with Dick Johnson Racing at Bathurst that many V8 Supercar fans will have forgotten about.

Bright left a secure and successful seat at Stone Brothers Racing to continue his open-wheel aspirations, driving in Indy Lights in America in 2000 against the likes of Scott Dixon.

He won a race at Portland, though despite his American commitments, was unable to return to Australia for the Queensland 500 – where Dick Johnson actually made a one-off comeback to act as the Shell Helix team’s fourth pilot.

But Bright was able to return in time for Bathurst to pair up with Paul Radisich in the #18 entry and that prompted the V8 Sleuth to ask – what happened to the car in which Bright made his one-off appearance with DJR?

Bright’s DJR Bathurst contender – DJR AU11 – was actually a very new car, having made its debut in the hands of Radisich in the previous round at Sandown. The Kiwi won the round, which was something of a breakthrough given it was the first V8 Supercars Championship round a Ford had won in the entire 2000 Championship!

‘The Rat’ then drove it to overall victory in the non-Championship event on the Gold Coast with two race wins after a weekend-long tussle with Russell Ingall, before teaming with Bright for Bathurst.

That year’s entire race week was affected by terrible weather as rain lashed Mount Panorama and made the paddock and pit area a nightmarish bog.

Radisich qualified fifth and the duo were contenders all day, though led only a single lap of the 161-lap race (it was lap 26 for the tech heads out there!).

After the rain cleared and the track dried up, Radisich found himself in third place though this was improved to second when leader Tony Longhurst collided with Adam Macrow as he went to lap the 1998 Formula Ford Champion.

But the margin to Garth Tander in front was too much and he and Bright finished second, 2.4-seconds behind at the line.

That 2000 result is significant for many reasons. It was the last time Radisich stood on the Bathurst podium and remains Bright’s best Bathurst finish to this day since his 1998 win with SBR. And DJR has not finished that high in any of its assaults on the Mountain since.

The Bathurst runner-up car was retained by Radisich as the #18 entry for the first few events of 2001 at Albert Park and Phillip Island before he debuted a new car at Adelaide.

This chassis transferred across to becoming Steven Johnson’s #17 car which he used to claim his first V8 Supercars Championship win at the GMC 400 in Canberra.

He drove it through to the endurance races, where it was rested and sent on a boat to New Zealand (this was in the years before the cars were air-freighted overseas) for Johnson to run at Pukekohe.

It became a spare chassis in 2002, though made a few appearances as #71 in the hands of endurance pilot Greg Ritter, who failed to pre-qualify at Phillip Island but then made the field at Eastern Creek.

The car was pressed back into action for the Queensland and Bathurst endurance races as Ritter was joined by Alan Jones in what turned out to be the former F1 World Champion’s final appearance in the Bathurst 1000 where the duo finished sixth.

Radisich and Johnson crashed into one another at Pukekohe, so this car was prepared for the final round of the season at Sandown for Radisich to drive – it was his final appearance with DJR after a stint of four years driving the #18 entry.

DJR moved to BA Falcons in the V8 Supercars Championship for 2003, though kept this DJR AU11 chassis to use in the Development Series with Tony Ricciardello driving. He parted ways with the team before the end of the season so Warren Luff took over for the final round at Mallala and the non-championship race at Bathurst.

It became one of the ‘must-beat’ cars in the 2004 DVS and became the #71 Fujitsu entry of Owen Kelly. The car was a title contender all season and won the Adelaide and Queensland Raceway rounds, though some bad luck brought Kelly undone and he finished fifth in the points.

Aussie international David Brabham also ran the car at Bathurst in the Saturday afternoon, non-championship DVS race to get more laps ahead of driving in the main race on Sunday in a BA Falcon with Kelly.

The car was then sold to ex-speedway racer Greg Smith, who kept the Fujitsu livery on it and competed in the DVS in 2005 and 2006 before it was sold to Stephen Voight and he raced it at the Ipswich DVS round in 2007.

It appeared for sale in 2008 restored back to its 2000 Shell Helix/DJR livery and the V8 Sleuth has now tracked the car down to Melbourne’s Craig Miles, who purchased it in late 2012 and is thrilled with his piece of V8 Supercar history.

“I was lucky enough to purchase this great piece of DJR history in October last year,” Miles told the V8 Sleuth.

“I’ve been doing bits and pieces with the mechanicals more than anything. We’ve done the shocks, got the Holinger gearbox serviced and bit by bit going through the car making sure it’s all good.

“As the new Australian Five-Litre Touring Car Association grows (recently formed for car owners of ex-V8 Supercars run between 1992 and 2002), I’ll race it occasionally but I plan to get back to racing my E49 Charger in Historic Touring Cars once the motor is rebuilt. Unfortunately I don’t have the time or money to race both cars at the same time!

“But we’ve had the Shell car out on the track a few times. It’s in great condition and really looks the part.”

Many thanks too to Phil Wise for his image of the car in its present appearance while on-track at Calder in Melbourne.

06/06/2013
Stay In The Know
Sign up to the Virgin Australia Supercars Championship Newsletter
This website uses cookies to improve your user experience. By continuing, you will be providing your consent to our use of cookies.Ok