This past week marked 19 years since Marcos Ambrose made his Supercars Championship debut, so this week’s edition of Saturday Sleuthing looks back at the car used by the Tasmanian in his sensational rookie season.

It was an association that, with the arrival of the BA Falcon in 2003, went on to deliver two Drivers Championships and three straight Teams Championship victories as the SBR outfit became the category’s benchmark.

However, Ambrose’s first two years in the championship saw him armed with an AU Falcon in an era where the VX Commodore held the edge in the ongoing battle between Ford and Holden.

Unlike many rookies, Ambrose was given a brand new car to play with. 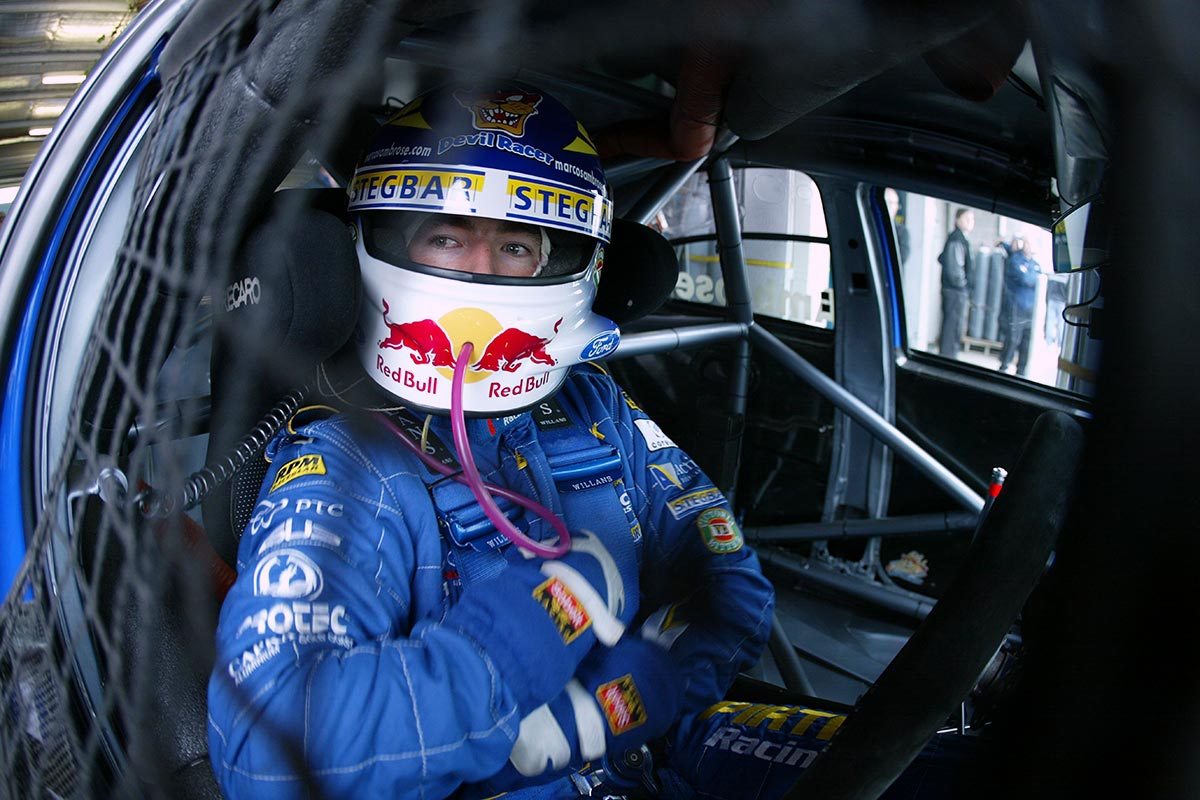 The previous Pirtek AU Falcon, driven to race wins by Jason Bright in 1999 and Craig Baird in 2000, had been sold to Gibson Motorsport for high-profile Ford recruit Craig Lowndes to race in 2001, SBR building up AU4 over the summer for its new driver.

Ambrose didn’t take long to make an impression on the category’s established stars: he took pole position for his first race!

The year began with the non-championship support races at the Formula 1 Australian Grand Prix.

Despite no prior experience of the Albert Park circuit and minimal Supercars miles, Ambrose pipped Mark Skaife and Glenn Seton in a qualifying session where the trio were split by less than a tenth of a second.

While a setup mistake meant Ambrose slid back to seventh in that opening race, the marker had been set. 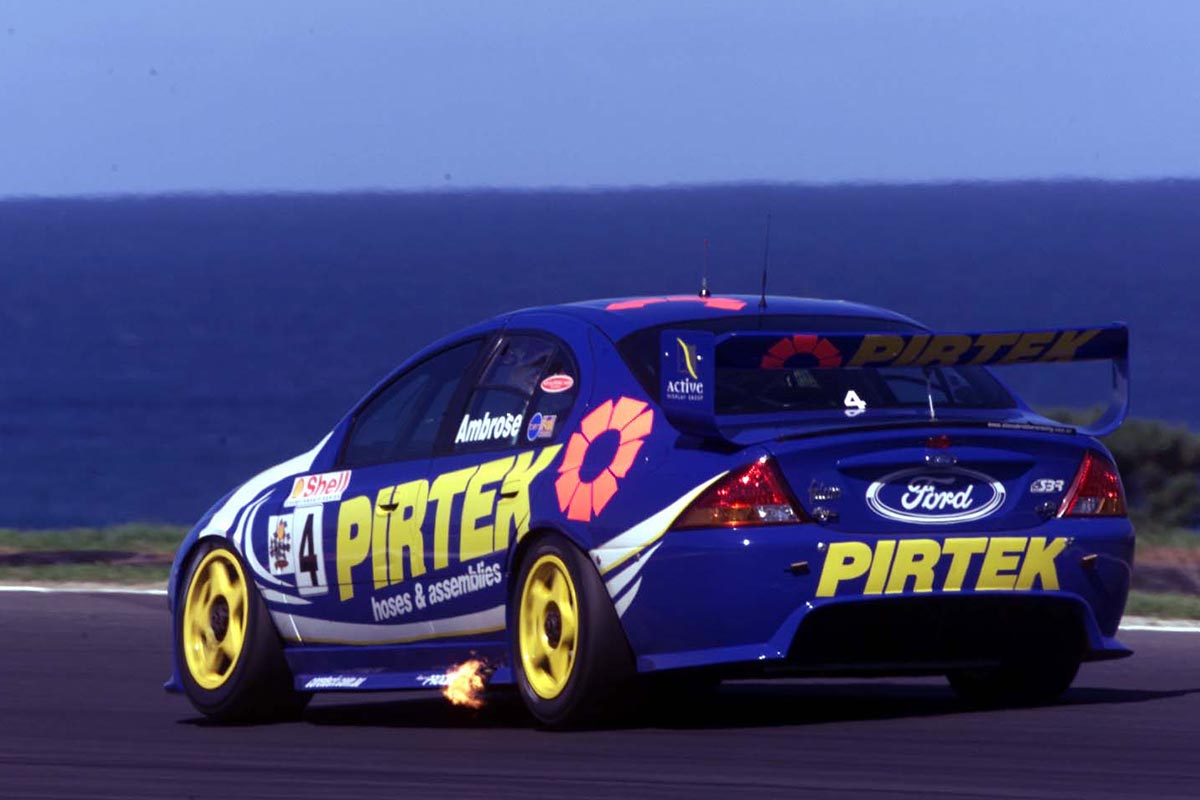 Ambrose ran among the front-runners in his championship debut at Phillip Island, then charged up to sixth from 36th on the grid in the Sunday race at the Adelaide 500 – he’d started the Saturday race in sixth, but ended up in the fence after just eight laps after a clash with Todd Kelly on the front straight.

His first championship pole position came next time out at Eastern Creek, followed by his first round win at Hidden Valley in May – although he’d have to wait until 2002 for his first race win.

More highlights were to come in between, including SBR AU4 taking pole position for both the Queensland 500 paired with Greg Crick and the Bathurst 1000 partnered with Wayne Wakefield – Ambrose becoming just the second rookie to claim pole in the race’s history – although both races ended in retirement.

More infamously, SBR AU4 also made the highlight reels at the Canberra 400 when a wheel parted company with the car, rolling all the way down the following straight before bouncing over a kerb to land perfectly atop a tyre bundle at the subsequent chicane.

Ironically, the two-time 500cc motorcycle world champion got behind the wheel of AU4 for around 15 laps of Queensland Raceway between the Queensland 500 and Winton rounds in 2001 as part of a feature story for Channel 10. 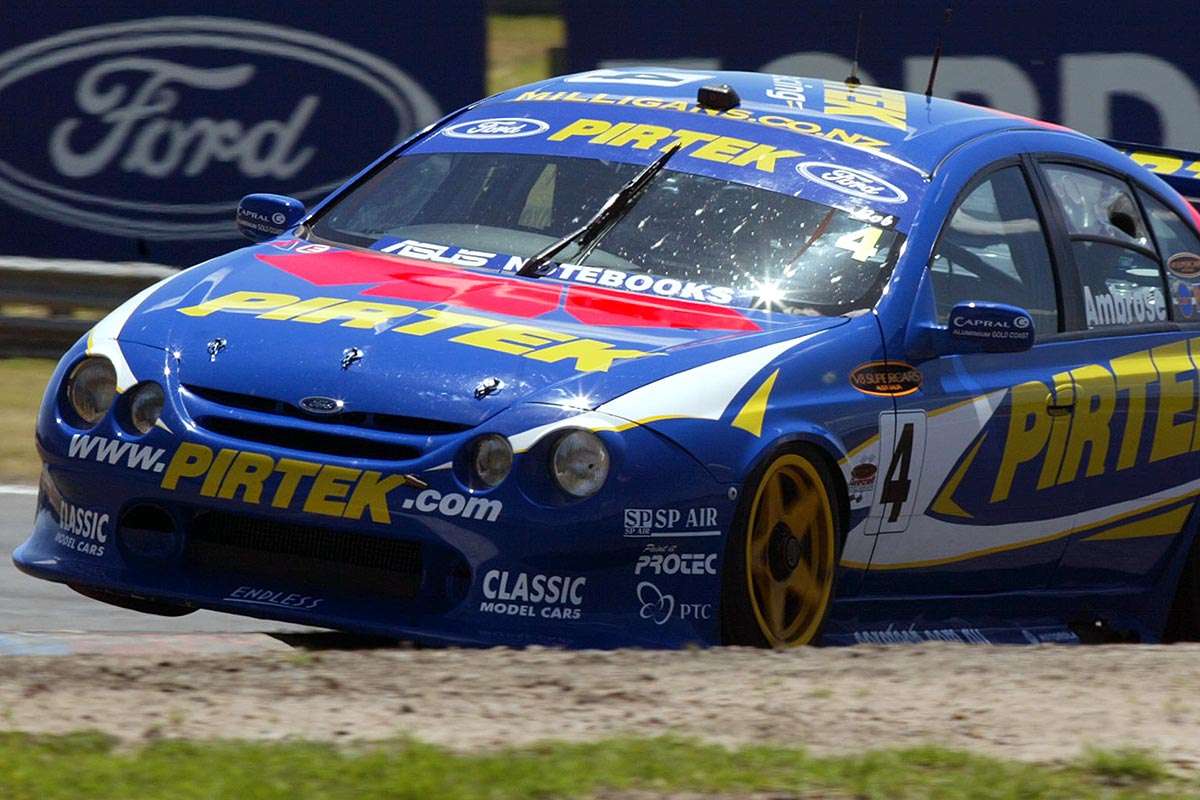 Ambrose retained the car for 2002, claiming his first race win at Phillip Island early that year, and then sending the AU Falcon off with a dominant display in the final round of the season at Sandown, claiming pole position and winning both races.

The end of season flourish secured his first top three championship finish behind title-winner Mark Skaife and second-placed Greg Murphy; a sign of Holden’s dominance of 2002 was that Ambrose was the only Ford driver in the top six positions at the end of the season.

Superceded by the BA Falcon in the main game for 2003, SBR AU4 spent the next few seasons racing in Supercars’ second-tier series.

Todd Wanless raced the car at Paul Cruickshank Racing for the majority of the 2003 Konica V8 Supercars Series, while Owen Kelly hopped behind the wheel for the class’s 25-lap support race at the Bathurst 1000.

AU4 remained with PCR for the next few seasons, raced by Markus Zukanovic in 2004 and Phil Scifleet in 2005, before being sold to Dean Neville who campaigned it in the renamed Fujitsu Series in 2006 and 2007. 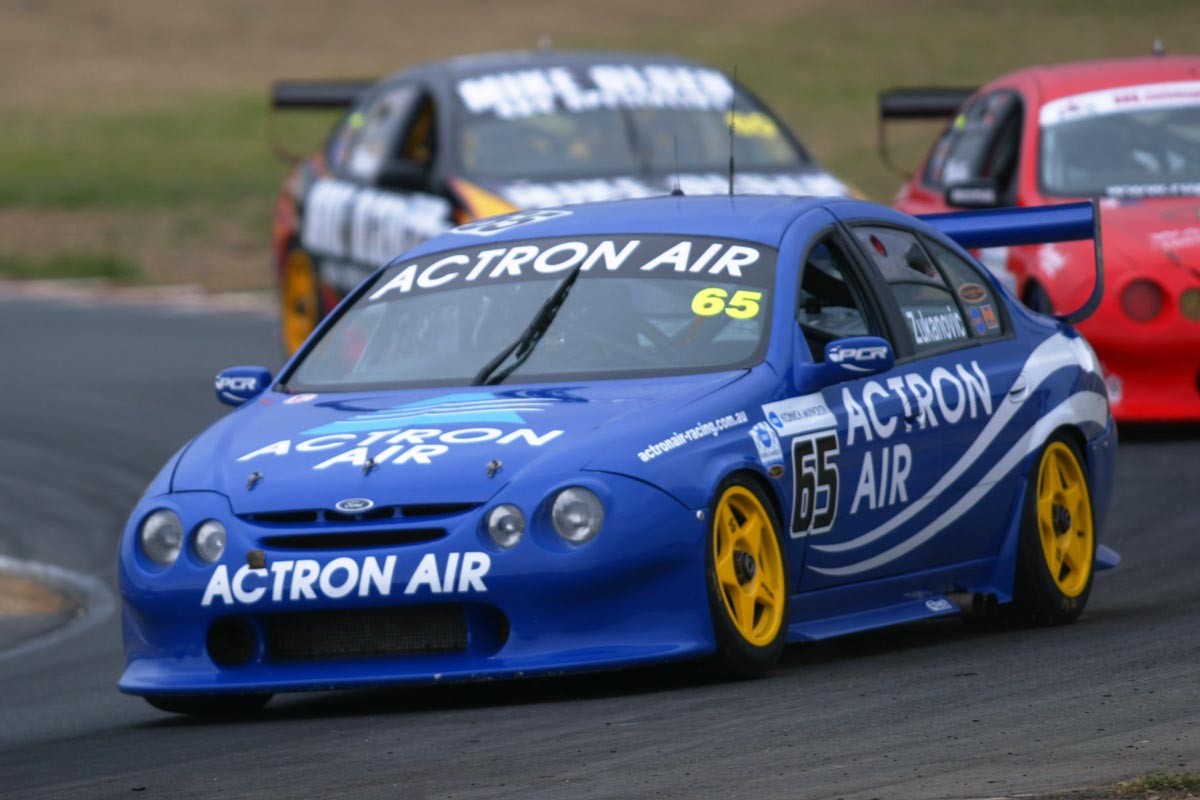 Once its racing life was finished AU4 became part of overseas-based Australian businessman Dean Montgomery’s collection and was returned to its original 2001 livery, its first public appearance after its restoration coming at Mount Panorama in 2012 for the Legends Display as part of the 50th year celebrations of the Great Race.

The car was reunited with Wakefield at the Winton Festival of Speed Historics event in 2014, while later that year AU4 was on display at Sydney Olympic Park when Ambrose made his return to Supercars racing at the Sydney 500.

Purchased in 2017 by a private collector, the machine spent some time as an exhibit in Bathurst’s National Motor Racing Museum before leaving this past January to undergo a mechanical freshen-up in anticipation of returning to the racetrack in the months ahead.

26/03/2020
Stay In The Know
Sign up to the Virgin Australia Supercars Championship Newsletter
We use cookies to ensure that we give you the best experience on our website. If you continue to use this site we will assume that you are happy with it.Ok