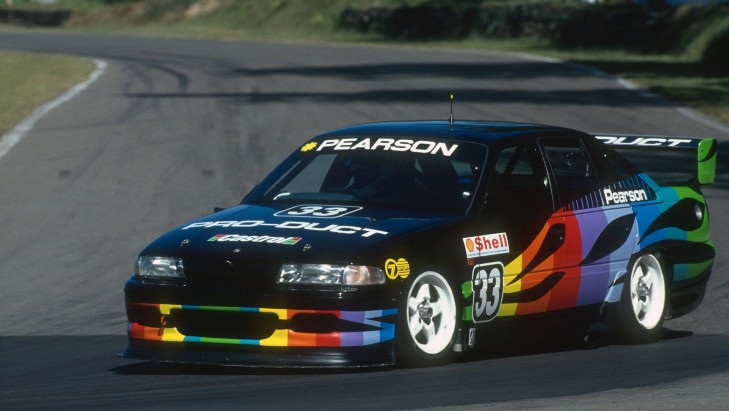 While V8 Supercars is today a top-line, seriously professional sport contested by world-class drivers and teams, back in the 1990s the playing field looked a little different.

Back then the big names were joined on the grid by semi-professional 'privateers', who were not full-time racing drivers and ran much smaller, lower-budget operations than the leading professional teams of the era.

We have had a fair bit of mail recently from fans wanting to know what happened to some of the privateer cars from the early years of the V8 Supercar era, and this week on Saturday Sleuthing we have tracked one down.

Today we're focusing in on the beautiful black Pro-Duct Commodore VP raced by Sydney-based privateer Bob Pearson between 1993 and 1995.

Sydney-based Pearson was one of the leading privateers during this period and fit a part-time race program in between running his business, Pro-Duct Air Conditioning.

He still competes today in the Australian Manufacturers Championship, teaming up with Glenn Seton in a Mitsubishi EVO 10 and giving an opportunity to Glenn's son Aaron as he begins his car racing career.

The Pro-Duct Commodore we're focusing on today was given the chassis number PE 016 as it was built by Perkins Engineering as a customer car for Pearson in late 1992 and was completed in time for its racing debut in early 1993.

It is best known for its stealth-like black livery with a multi-coloured design across its sides that made it distinctive and eye-catching all at the very same time.

Pearson debuted this car in the pre-championship Triple Challenge event at Eastern Creek and then ran it in the opening round of the 1993 Australian Touring Car Championship at Amaroo Park where it was involved in a three-car pile-up at Stop Corner.

The event was historic given it was the debut of the winged five-litre V8 Commodores and Falcons in the Championship that would eventually later become V8 Supercars.

Like most privateers, Pearson only entered the events in his home state of New South Wales (Amaroo Park, Eastern Creek and Oran Park) as well as two rounds of the AMSCAR series also held at Amaroo.

Pearson was joined by veteran Bruce Stewart at Bathurst in 1993 and the pair finished a very respectable 10th outright. 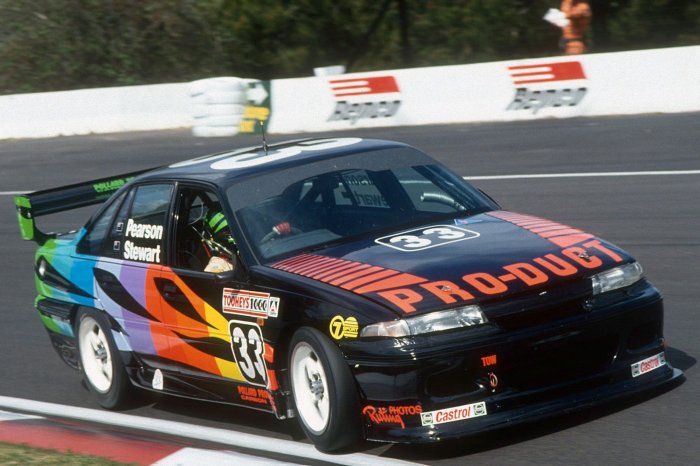 Pearson ran this car again in 1994, starting with the Triple Challenge event before an expanded ATCC schedule, this time adding the Victorian rounds at Sandown and Winton to Amaroo and Eastern Creek. Due to business commitments, he missed Bathurst in 1994 and the Pro-Duct car did not take part in what was then known as the Tooheys 1000.

In 1995, Pearson drove this car in the later rounds of the ATCC at Winton, Eastern Creek, Mallala and Oran Park and returned to Bathurst with Stewart.

The Pro-Duct team started 19th but was unable to repeat their top-10 performance from two years earlier and were out with a blown engine after 88 laps.

This race was the cars' last in Pearson's hands, as he transferred most of the running gear from it to a new VR Commodore shell that made its debut the following season. 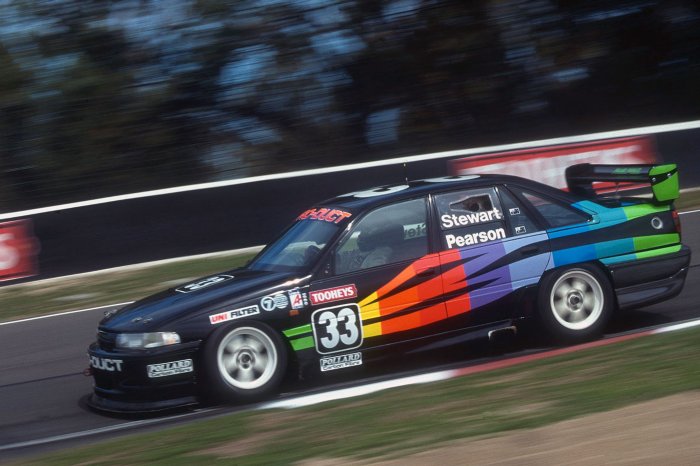 The original VP bodyshell was sold to Robert Smith from Ballarat in country Victoria, who ran it in hillclimbs and club day sprints with the running gear from an ex-Group A VL Commodore touring car.

It later passed through the hands of Milton Seferis - a collector of numerous Commodore ex-V8 Supercars - and was then sold to John Brummelen in Melbourne in the mid 2000s.

In 2012 it was purchased by David Gardner from New South Wales, who returned the car to its distinctive Pro-Duct livery. Gardner sold the car to its current owner, Jamie McDonald, earlier this year.

McDonald also owns another ex-Pro-Duct VN Group A Commodore (the first VN built by Larry Perkins prior to building the Mobil cars he and Peter Brock raced) and is working on getting it back on the track soon.

He also has the ex-Steve Masterton, Masterton Homes Group A VK Commodore that he raced in Heritage Touring Car racing for Historic Group A and C touring cars.

Some of the lesser-known privateer drivers and cars certainly added colour and character to the early years of what became known as V8 Supercars, and this colourful Commodore still has a special story today.

The Pro-Duct car is rare as one of only two VP Commodore touring cars we're aware of to survive in its original VP guise give all other VP chassis were either converted to VR/VS specification or indeed destroyed.

Next Saturday is the AFL Grand Final at the Melbourne Cricket Ground so Saturday Sleuthing will take on something of a footy theme - check back next week for a Sleuthing story focusing on the car once raced by an AFL legend in front of a massive Melbourne crowd.

-
If you have a suggestion for a car story, some information or want to give some feedback, contact the V8 Sleuth via the following methods:

18/09/2014
Stay In The Know
Sign up to the Virgin Australia Supercars Championship Newsletter
We use cookies to ensure that we give you the best experience on our website. If you continue to use this site we will assume that you are happy with it.Ok