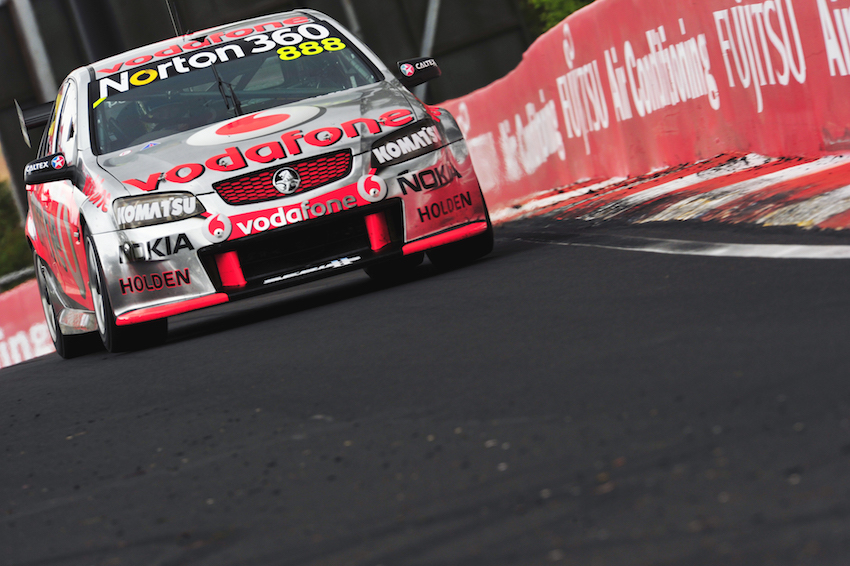 A stunning career will come to an end the chequered flag falls on the final Dunlop Series round of 2016 at next month’s Coates Hire Sydney 500.

But it won’t be a driver saying farewell, rather, an actual car that will be making its final racing appearance and roll into parc ferme and into retirement.

Triple Eight Race Engineering’s chassis 888A-028 has a long and celebrated list of achievements from a six-year racing career.

The list of achievements of this car speaks for itself: winner of the 2010 Supercheap Auto Bathurst 1000, the 2010 and 2011 Phillip Island 500s, the 2014 Dunlop Series, three Bathurst 250 Dunlop Series mini-enduros and countless numbers of race wins, podiums and pole positions.

Although born to race, many will be happy to see such a significant car with a long list of achievement spared from the rigors and danger of racing, consigned to history for all to appreciate for years to come.

Tracing this car back to its origins, it first appeared on the grid when it made its racing debut as a freshly-built Commodore VE II at the 2010 L&H 500 at Phillip Island in the hands of Craig Lowndes and Mark Skaife as the #888 TeamVodafone entry.

A first up win paved the way for further success as the duo then went on to take the endurance double when they claimed victory in the Supercheap Auto Bathurst 1000; Lowndes leading home a Triple Eight 1-2 finish in a car that earlier in the weekend he’d used to lap the Mountain faster than Greg Murphy’s famous ‘Lap of the Gods’ from seven years earlier.

Lowndes used the car for the rest of the year and retained it for the 2011 championship, claiming runner-up position in the title chase to teammate Jamie Whincup after a clean sweep of wins at Queensland Raceway and another Phillip Island 500 win alongside Skaife.

In fact, the win was Skaife’s last behind the wheel of a Supercar, though it very nearly was the second last given he and Lowndes finished a close second at Bathurst to Garth Tander and Nick Percat’s HRT car.

At the end of the season, reigning MotoGP champion Casey Stoner tested chassis 028 in his first taste of V8 Supercars too, a sign of things to come for both the man and the machine!

The car lay idle during the 2012 season, acting as the TeamVodafone spare chassis, however it returned to active competition amid much hype and plenty of headlines in 2013 when Stoner joined the team to compete in the Dunlop Series.

The bike ace endured a tough debut, crashing out of his very first race in Adelaide, though he did find more speed and make improvement as the season went on. Eventually he decided at the end of the year not to continue his pursuit of a car racing career.

But while Stoner wasn’t continuing into 2014, his former car most definitely did given it was purchased by Eggleston Motorsport with Jamie Whincup’s Red Bull endurance co-driver Paul Dumbrell slotted behind the wheel in the Dunlop Series.

The bid to keep Dumbrell razor-sharp for the all-important Pirtek Enduro Cup worked well too. He debuted the car in the familiar blue, black and grey colours of Eggleston Motorsport running as car #88 in the Adelaide round and won the opening round straight out of the gate.

EMS and Dumbrell also took round wins at Ipswich and in the 250-kilometre enduro at Bathurst to seal the Dunlop Series championship (his second given he also won as a youngster back in 2002) with one round left to go.

For the 2015 season Dumbrell stayed in the car, this time featuring the coveted #1 on its window as the DVS teams were finally permitted their own number pool rather than using the left overs from the Supercars Championship.

He began the season in style, winning a race and the round in the season opener in Adelaide. He also went on to win the Bathurst 250km enduro for the second year in a row, however it was not enough to stop Cam Waters from claiming the title with Dumbrell finishing second in the points.

Regulation changes in the Dunlop Series that saw the New Generation cars permitted into the field for the first time this year has meant that Dumbrell and chassis 028 have found success somewhat harder to come by.

Highlights this season have been few and far between, though race wins at Adelaide and Sandown – coupled with a third straight win in the Bathurst 250 – have helped underline the fact that this car remains a competitive one.

Following the final round at Sydney Olympic Park in a few weeks time, EMS owners Ben and Rachael Eggleston will retire chassis 028 and restore it back to its 2010 Lowndes/Skaife TeamVodafone Bathurst-winning livery.

After such a long and successful racing life, there’s no doubt that this Triple Eight Commodore has deserved its retirement, though he look forward to perhaps one day in the future when its former pilots slip behind the wheel for a guest drive.

Next week Saturday Sleuthing celebrates the final Coates Hire Sydney 500 with a story on the car that won the wildest Sydney Olympic Park race ever seen in Supercars history.