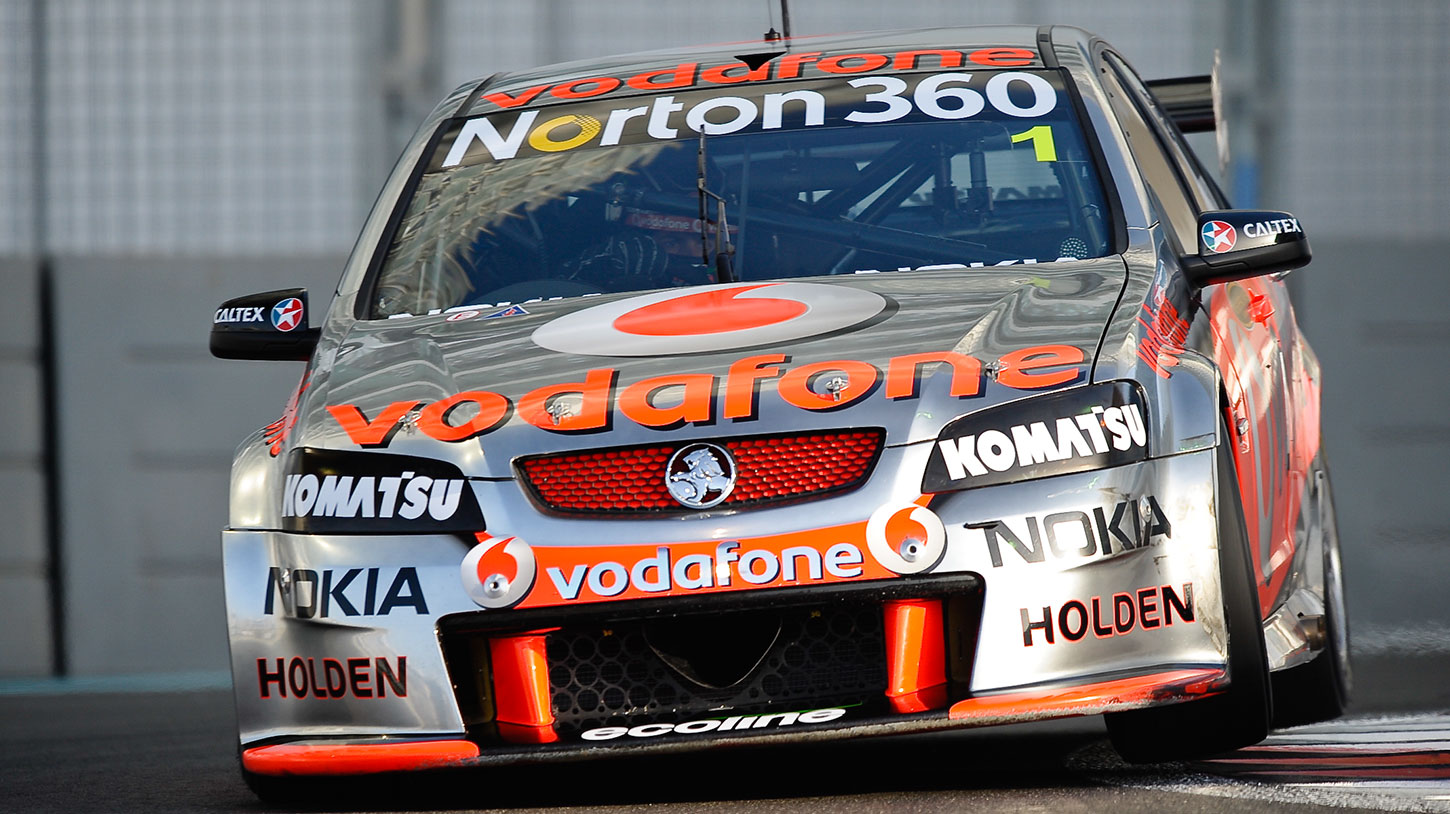 Six-time V8 Supercars Champion Jamie Whincup is one of a rare group of current or former V8 stars to own one of their former race cars.

Last week on Saturday Sleuthing we featured Mark Larkham’s Mitre 10 Falcon that remains in his possession, so this week our V8 Sleuth Aaron Noonan is taking a look at Whincup’s record-breaking Vodafone Commodore nicknamed ‘Kate’ that he purchased from team boss Roland Dane after its racing career was over.

You’d be forgiven for thinking you know Whincup’s motivations for buying the car – after all, it helped him claim the 2011 and 2012 V8 Supercars Championships and the 2012 Supercheap Auto Bathurst 1000 alongside Paul Dumbrell.

All up it chalked up 28 V8SC race wins across three seasons (2010-2012) but there’s one particular race win that is the reason why Whincup made sure he purchased it – and it’s not Bathurst 2012.

Whincup’s father David passed away after a brief cancer battle on the eve of the 2012 season, just before the Clipsal 500 in Adelaide.

But ever the fighter, Whincup came up trumps in his first race just a week after losing his Dad. 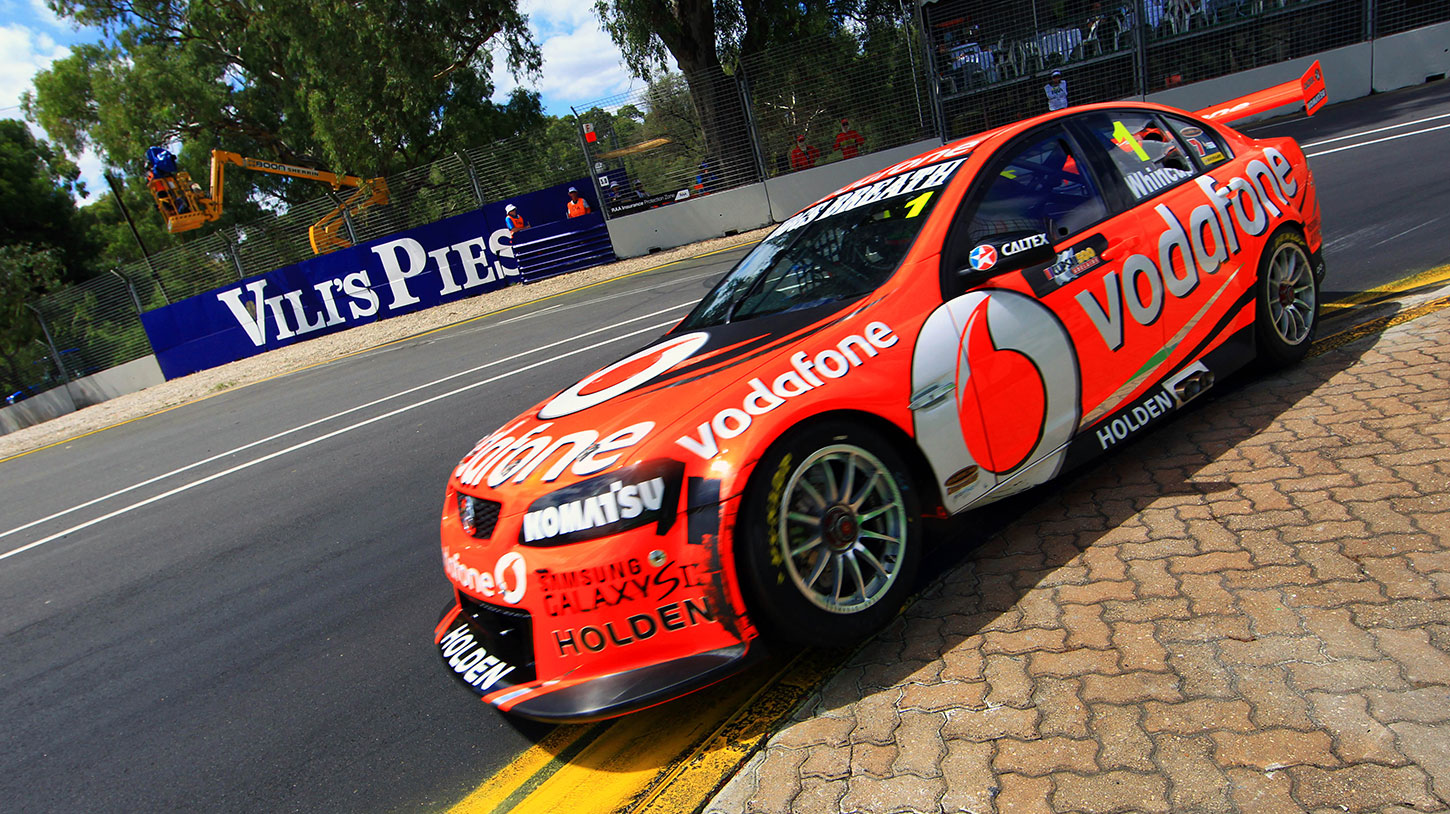 From fifth on the grid he ran behind teammate Craig Lowndes in the early laps and chose to pit out of sequence to avoid double stacking in the event of a Safety Car, but at the cost of making three pit stops, while his rivals all made two.

He drove every lap like a qualifying lap and passed great friend Will Davison (whose FPR Falcon was running on fuel vapour and ran dry) on the last lap to sweep home to a very special victory.

“I bought my 2012 car because of that race,” Whincup told our V8 Sleuth in a revealing television interview in 2014.

“That race meant so much to me. Passing Davo on the last lap … I’m not a spiritual person but it was pretty crazy what happened. I’ll be able to be reminded of that race with this car when I am old.

“It’s one of the toughest things I’ve done. I was best friends with my Dad, I spent every weekend at go-kart tracks with him. He was my best mate, my biggest role model.

“To lose someone like that so early, I’ve spent the last few years reminding people of how valuable the time with your parents is.”

It is a significant car for a whole host of reasons, including that it was the first ever ‘race spec’ Holden Commodore built by Triple Eight (they previously built a ride car in late 2009 from a Falcon chassis).

Whincup debuted ‘Kate’ in the opening round of the 2010 season at the Yas Marina Circuit in Abu Dhabi where Whincup and Triple Eight demoralised the opposition by winning two races from two starts in convincing fashion in Triple Eight’s first weekend as a Holden team.

Whincup took his winning streak to four straight with another clean sweep the following weekend in Bahrain and drove this car though to the Winton round, after which a new chassis debuted and ‘Kate’ become a spare.

It was given an off-season overhaul and upgrade to VE II specifications before it became Whincup’s #88 car again for the 2011 season.

Yet again, Whincup won the season-opening race in Abu Dhabi with this car - the first of 10 race wins that would lead to his third title crown, and first in a Holden.

The champion was joined in the enduros at Phillip Island and Bathurst by Andrew Thompson and on the Gold Coast by French ace Sebastien Bourdais, who partnered Whincup to win the first 300km race on Saturday.

This chassis was Whincup’s again in 2012 and rolled out in an eye-catching, dayglo red Vodafone livery - the final year of the telco giant’s long-running sponsorship of the team. 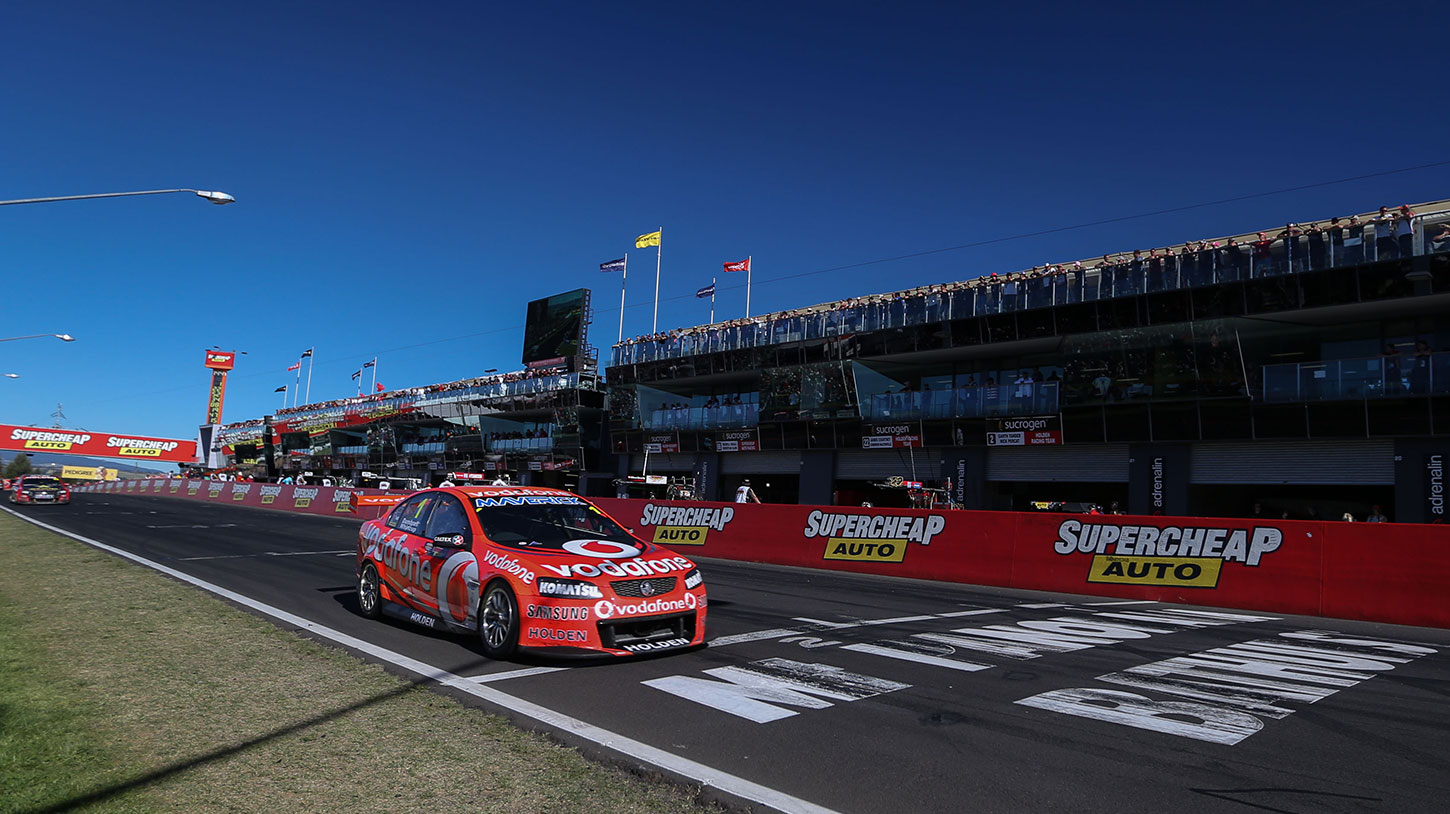 Whincup raced this car throughout that season, and was joined in the endurance races by Paul Dumbrell. The pair drove ‘Kate’ to victory in the historic 50th year celebration of the Supercheap Auto Bathurst 1000 after a nail-biting finish between Whincup and David Reynolds.

Frenchman Bourdais then returned to partner Whincup at the Gold Coast 600, where they claimed another win in the Saturday race.

Whincup clean swept all three races at the Yas Marina event supporting the Abu Dhabi Grand Prix and carried ‘Kate’ to a special place in the history books as the most-winning individual chassis in ATCC/V8 Supercar history, fittingly at the circuit where this chassis debuted in 2010.

Whincup went on to clinch his fourth championship - and second for this chassis - in the penultimate round at Winton, and raced ‘Kate’ for the final time in the Sydney 500 at Olympic Park - the last race for the previous generation V8 Supercar - in a chrome Vodafone tribute livery. 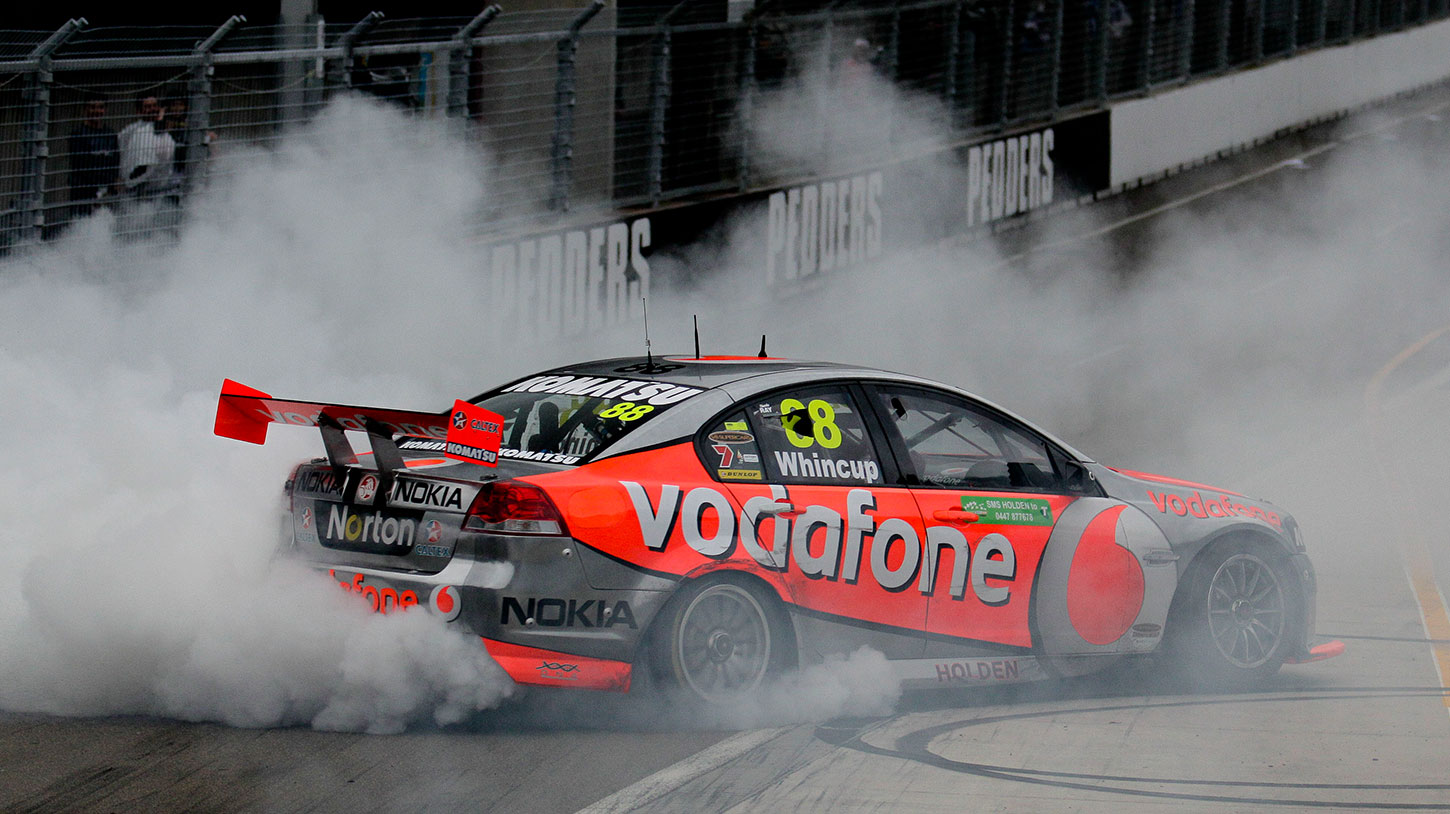 It was tested at Queensland Raceway by Casey Stoner shortly after that event but, unlike the other Triple Eight-built VE Commodores, this car was never passed down to the Dunlop Series.

In late 2012, Whincup joked that he would sell his house to keep this car - such was his connection with it - but eventually came to a deal with team boss Roland Dane to purchase it.

He took delivery of it at the beginning of this year. Former Triple Eight mechanic Gary Bailey – who also restored the 2006 Lowndes/Whincup Bathurst-winning Falcon for Roland Dane – gave Whincup’s Commodore his magic touch and the special Commodore is now safely tucked away.

The V8 Sleuth is keen to convince Jamie to bring Kate out to play sometime in the future!

Watch here the video of Whincup driving the Triple Eight transporter himself to collect this car earlier this year too!

This is the last Saturday Sleuthing of the 2015 season – thank you to all the fantastic V8 Supercars fans all over Australia, New Zealand the rest of the world who regularly get in touch with suggestions and feedback.

If there’s a car you’d like to see featured in the future, contact the V8 Sleuth via the following methods below: