Sandown win would be “special” 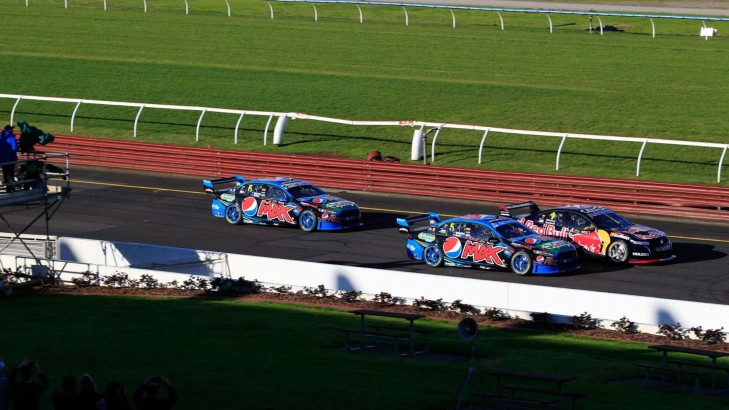 Pole man Jamie Whincup believes he and co-driver Paul Dumbrell are not the favourites for this afternoon's Wilson Security Sandown 500, but said a win today would be special.

Whincup and Dumbrell are looking at three in a row at the 500km classic, after a dramatic win in 2013 and a dominant performance in '14.

The Red Bull duo debuts a new car this weekend and while it was plagued with a vibration during its pre-Sandown test, Whincup came out guns blazing and has been on top both days of the race meeting, as well as this morning's warm-up.

"It will be special," Whincup told v8supercars.com.au of a win.

"It won't top 2013 if it was to happen. But certainly there's been a lot going on behind the scenes and my job is the last piece of the puzzle to showcase all that work that's gone on."

In '13 Whincup debuted a new car for the event and came from the rear of the field after a pit lane penalty, to win with Dumbrell.
Speaking to v8supercars.com.au earlier this year, Whincup named that race as one of his career highlights.

"2013 was an amazing story because of the effort that went on behind the scenes. To be honest we only need three quarters of that again with the vibration on the test day trying to sort all that out," he said.

This time around, Whincup's title defence has grown tougher as this season has gone on. He sits 449 points behind MarkWinterbottom in sixth and knows it will be a difficult gap to bridge. However he is positive about this weekend and

"We've come here with a new car and we're fairly confident that we can do a good job," Whincup said.

"I'd say we're healthy but we're not the team to beat at the moment. We're trying to do everything we can to turn that around."

He described earning ARMOR ALL Pole Position as 'over-achieving' after Dumbrell's impressive performance against the co-drivers in the first of the qualifying races.

"Paul was a big part of that moving from third and getting in front of the FPR guys and it was my job to stay in front," he said.

"Great to start on the front row and we'll see if we can maximise and stay there."

The race kicks off at 1.25pm local time.