Sandown “our best performance of the year” 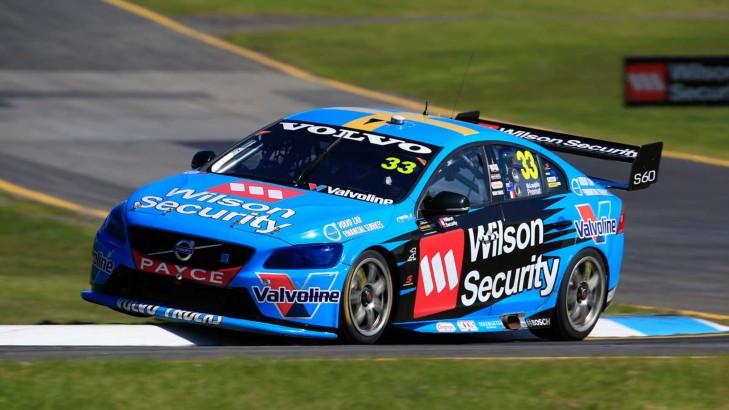 While the finishing positions did not indicate it, Garry Rogers believes the form of the factory-backed Volvo S60s at the Wilson Security Sandown 500 was the best they have shown all year and now sets them up for a strong run at the Supercheap Auto Bathurst 1000.

The veteran team owner took heart from the reliable performance and pace of the cars after a series of engine blow-ups and other mechanical issues this season, even though the Scott McLaughlin/Alex Premat entry finished only 14th and David Wall/Chris Pither were 21st.

"I don't want to sound too cocky and this might sound a bit weird when you look at the results sheet, but I consider it our best performance all year," Rogers told v8supercars.com.au.

"We had two cars that technically went along through the whole event and were still stable with no issues we had to address through the event."

Rogers also expressed satisfaction with the form of Frenchman Premat and Kiwi development driver Pither - dubbed Monty (as in Monty Python) by the crew at Garry Rogers Motorsport.

"Considering Premat just got back he did a great job and I have got to say Python was impressive."

McLaughlin set the ninth fastest time in the Wilson Security GRM Volvo in final qualifying, but in the co-drivers qualifying race Premat finished 22nd after contact with Andrew Jones in the BOC Commodore.

McLaughlin then raced through in his qualifying race to claim 16th starting position for the opening round of the Pirtek Enduro Cup.

At the start of the race McLaughlin climbed to 12th place before a calamitous first pit stop that saw Premat exit the pits with the air spike still attached. Premat had to pit to have the spike removed and then serve a drive-through penalty for the team's error.

Running 23rd and a lap down, he and McLaughlin fought back to finish 14th on the lead lap.

The #34 started the qualifying race 24th, but Pither could gain only one position after a spin triggered by contact with Dean Fiore's Nissan Altima. Wall climbed five positions in his qualifying race to finish 18th. On Sunday the team battled with balance issues and a squashed exhaust to 21st.

"Our mechanical strength was certainly better at Sandown," Rogers confirmed. "Our engine supply is strong and if we keep doing what we need to do then then we can do much more than that (result).

"You keep doing the best you can with your group of people and I just think Sandown really for us showed we are in a positon to be competitive."

Rogers said he also took heart for Bathurst from McLaughlin's strong practice and qualifying pace and that Premat's fightback drive saw him lapping at the same pace as the race leaders.

Last year McLaughlin and Premat were victory contenders at Mount Panorama until McLaughlin hit the wall after a restart in the Cutting.

"I am excited, we are ready to roll. I will say my hail marys as I always do and we will see what happen," Rogers said.

He had a straight forward explanation for the pit stop error: "We muckedit up. Pretty simple. We have moved on from there. We have got guys who have done that for years. We absolutely mucked it up, end of story, move on."

While Rogers' short term focus is on Bathurst, he must also make a call on whether to continue with Wall, who is on a performance-based deal, or replace him with another driver for 2016.

"We are just taking it as it is at the moment," he said. "We are looking at all our options and nothing is out of the equation.

"We are in no hurry, we are just going about doing our business and hoping we make the right choice to get the best result. That's all I can really say."

Rogers also has the evolving situation at Volvo to consider. The Swedish manufacturer has purchased Polestar from motorsport partner Christian Dahl, who continues to build engines for GRM out of his new operation Cyan Racing.

How that relationship evolves and the future of Volvo in V8 Supercars beyond the current deal have been conversation points in the V8 Supercars pitlane.

"We all know what's been written in the press, but we have a contract until the year after next (with Volvo) and we will be doing our best to make sure they are excited to continue doing business with us," said Rogers. "That's all I can really do."