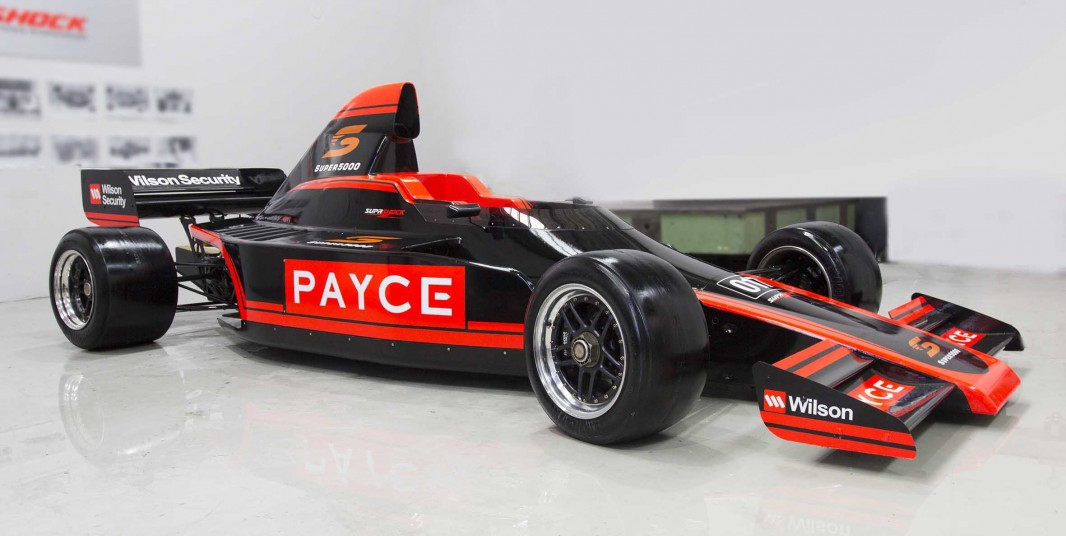 Being developed with a view to joining the support bill as a new class in 2018, the retro-inspired open-wheeler is powered by a 5.0-litre, V8 Supercars engine and Albins transaxle gearbox.

Tander is slated to drive the car during demonstration sessions this Saturday and Sunday, having been part of the development work so far with Lee Holdsworth and Alex Davison.

Roughly 400km of running has been completed across sessions at Phillip Island, Mallala and Adelaide International Raceway in recent months.

Designer Oscar Fiorinotto of Supashock Racing Engineering says spectacle is the focus, rather than outright speed, describing the car as a “baby brother or sister of the Lola T332” that dominated Formula 5000 when it was introduced in 1973.

“We haven’t focused on building what I would call the fastest widget in the box, but it’s certainly going to be the most entertaining,” Fiorinotto told Supercars.com

“It’s got our own suspension, it’s got a very unique suspension system, so it doesn’t run roll bars, it runs its roll control through its dampers. It puts its power down beautifully, and it conforms to the FIA safety standards.

“It sounds great, it looks good. I think it’s achieved targets in the sense that it was to deliver a highly entertaining product, rather than just another open-wheeler.”

Fiorinotto says the Super5000 is unlike other single-seaters, channelling what he believes is a big part of the success of Supercars.

“Australians are looking for an association and an emotional attachment to a particular series,” he added.

“Supercars has that. It’s got noise, it’s got a spectacle in that the cars are close, but there’s a level of rawness to it.

“It’s not a clinical championship, and it’s no different to NASCAR in the States. We’ve developed exactly that.

“It’s not clinical, it’s not a Formula 1 car, it’s raw. It’s got very high drag, designed intentionally so we can race the cars and pass cars and have a really entertaining battle.”

How Supercars gaming has evolved