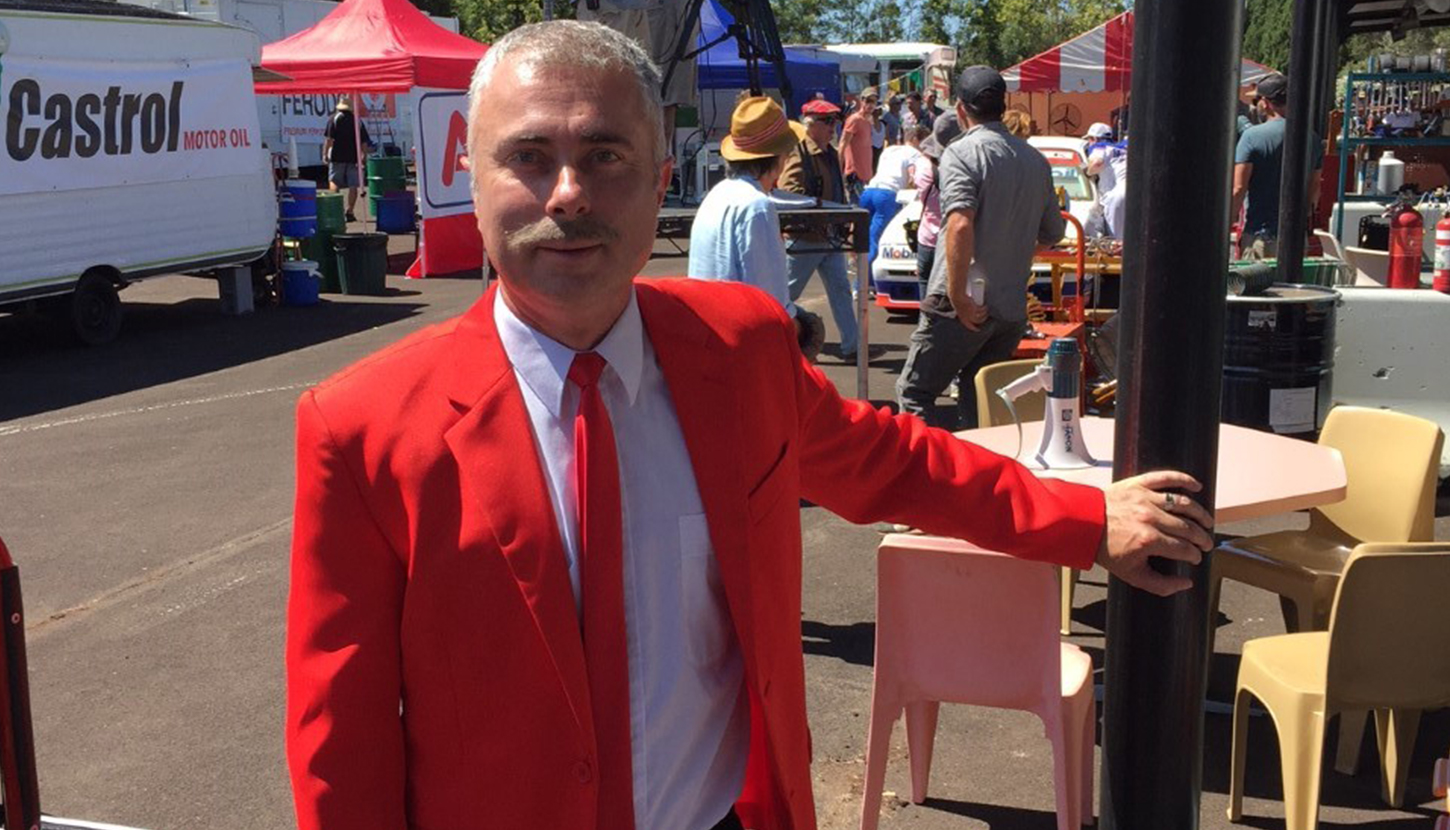 Supercars pit reporter Greg Rust clearly had a lot of fun wearing the retro outfits for the Wilson Security Sandown 500 broadcast, but judging by the new Brock telemovie, it’s not the first time he’s donned an 80’s mo!

A small role in the two-part telemovie airing on Network 10 this week came about purely by chance, and his day on set is one Rusty will never forget.

The producer’s of Brock first got in touch about 12 months ago. They needed a few contacts and I was happy to help. That was the end of it, or so I thought. Then they phoned back and asked if I would be up for a small part involving a podium presentation and a couple of voiceovers.

Initially, I said no because I’d never acted before and I thought there were others much better qualified for the role. But they persisted and I eventually came round to the idea, mainly because I thought this was likely to be a once in a lifetime experience. I later learned that some legendary Aussie commentators (who I have the greatest respect for) were lending their voices to the production as well. You can’t miss Mike Raymond’s voice in the current promo and I’ll leave the other as a surprise.

On the Wednesday before the Sydney 500 last December I spent the day on set and was staggered by the size of the production! They’d endeavoured to recreate the old Bathurst pit lane and paddock complete with signage and some cool cars (race and road). The wardrobe department was mind blowing with all kinds of period style apparel including red suit jackets like those the broadcast team famously wore.

I knew Matt Le Nevez a little from my years at Ten and we had a great chat about the movie over lunch. He’s an incredibly dedicated actor who I rate and was acutely aware of the magnitude of the lead role he’d undertaken. He was determined to get it right.

Matt introduced me to Steve Bisley who plays Harry Firth and the three of us talked mainly about the current Supercars competition. Both must have sensed my nerves. I mean what the hell was I doing working, albeit it briefly, with these guys? They’re seriously good actors.

In the lead-up the producer’s had asked me to study Garry Wilkinson’s style and mannerisms by watching some old races. He’s such a polished broadcaster and here was I channelling my inner Wilko, or trying to.

For something different Bisley thought a moustache would give it an 80’s touch. Yes I know Wilko didn’t run the mo but it kind of masked my appearance... a little. In minutes one of the award winning make-up team arrived with a briefcase full of fake mos! Steve was laughing as he picked out one that was perfect. It actually reminded me of Graeme ‘Mort’ Brown, who worked with Brock for many years and his mo back in the day.

I looked around as they counted down to “action”. It was a surreal moment. A big set, loads of actors, extras and a very experienced film crew. I knew it would cost a fortune if I screwed up my lines so I made sure I hit the marks. And importantly, it was dam good fun! One of the most enjoyable days I’ve had in 20 years of television.

Most of you will want to know what the miniseries is like? The reality is, I don’t know. I only spent a day with them and script access was limited to just my part. As I write this I still haven’t seen the finished product. I sense Brock will appeal to more than just us motorsport fans. Let’s face it, he was a massive figure in the community who connected with a much wider audience. There’s little doubt it will start a conversation among purists and casual observers just like INXS: Never Tear Us Apart did. I loved that series so I can’t wait to see Brock.

I once stitched up the great man by pretending to be a Kiwi radio jock. He thought an FM station was interviewing him for real after Pukekohe one year. He absolutely loved the gag and always promised to get even with me. Sadly that day never came. I hope he looks down, has a bit of a laugh at my acting debut and considers the ledger squared.