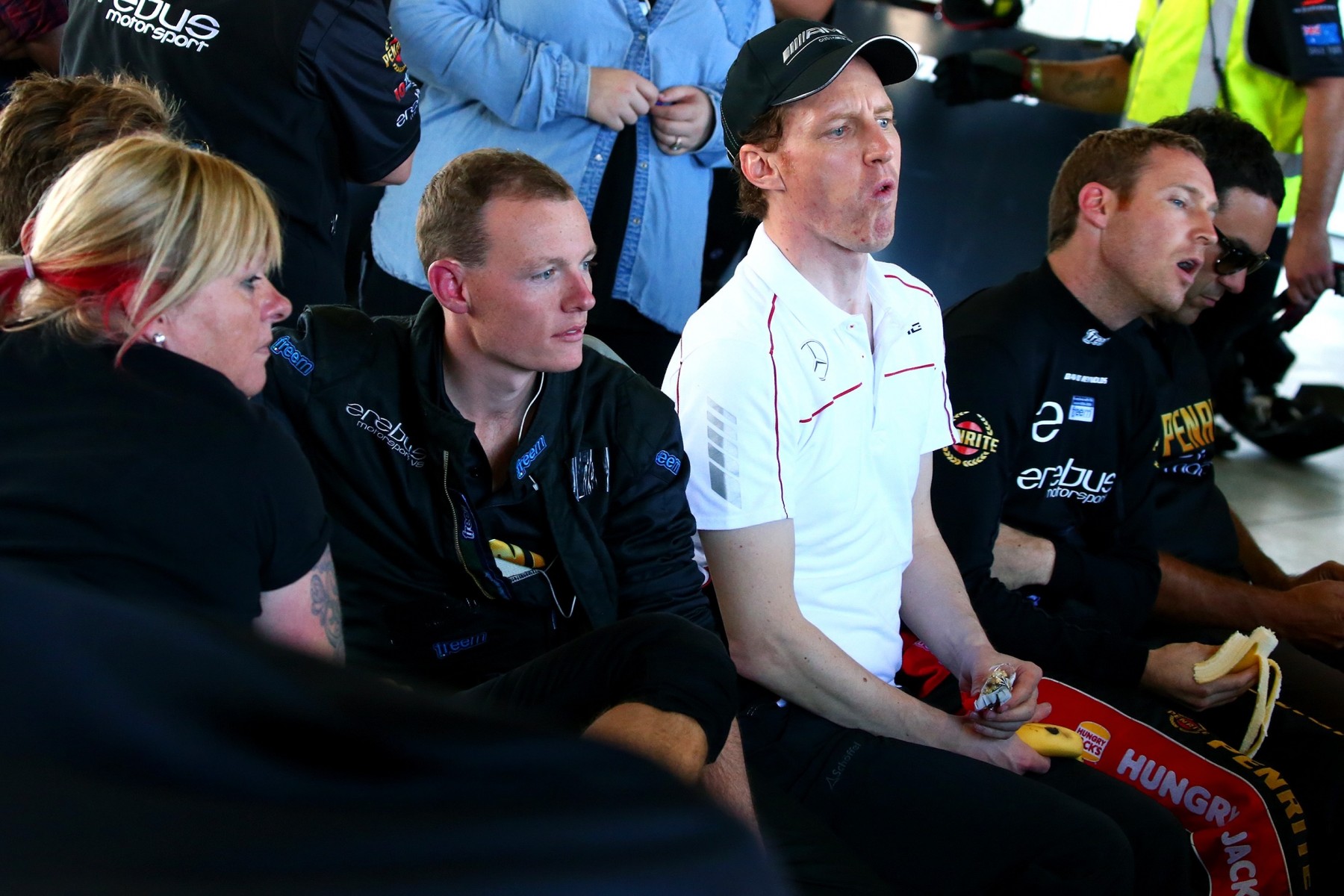 Fans wouldn’t have seen him on-track over the weekend, but in the garage Erebus new recruit Aaren Russell assisted his 2016 team at the Liqui-Moly Bathurst 12 Hour.

In preparation for his season with the group – which switches from Mercedes-Benz E63 AMGs to Holden Commodores in 2016 – Russell acted as ‘driver liaison’ and worked closely with the crew and new teammate David Reynolds at Mount Panorama. Erebus ran two GT cars over the weekend.

In the midst of relocating from Newcastle to Melbourne to be closer to his team, the 24-year old Dunlop Series graduate Russell embarks on his first season in V8 Supercars this year, with backing from long-time sponsor Plus Fitness.

February 22 marks his first opportunity to steer the car he will race in 2016 – though Russell did sample a new gen GRM Holden at Bathurst last year as a wild card.

He enjoyed the opportunity to get behind the scenes with Erebus as he focuses on the upcoming Winton test.

“It was an awesome weekend – it wasn’t something Erebus asked me to do, it was something we just thought would be nice, to get up to Bathurst and help out the team,” Russell said.

“I was given the role of official ‘driver liaison’ for the weekend to help them out, try and collaborate between the international drivers and the Aussies … but I helped out in all areas.

“I helped out on cars, I was actually driver assistant in the pit stops for one of the cars strapping the drivers in and all that kind of stuff.

“So I had a very active role over the weekend and it was a good chance to meet … a lot of the V8 Supercars team was there helping out, engineering, as was team management with Betty and Daniel [Klimenko, team owners].”

Russell wasn’t the only one settling in with his new Supercars team over the weekend – Reynolds lined up amongst Erebus’ selected GT drivers, while Will Davison slotted into a TEKNO seat, working with 2016 engineer Dr Geoff Slater.

Helping out behind the scenes is not unusual for Russell, who drove in family team Novocastrian Motorsport in the Dunlop Series for the past few years.

“I enjoyed myself [and] not having so much pressure on me before the season starts in V8 land … it was very tough sitting on the sidelines to watch and not be able to drive. But in saying that I know what I’m up for this year and I’m pretty excited about that.”

Getting to know teammate Reynolds better was also important, given they will be driving and tuning V8 Supercars that are new to the team this season.

“Dave’s a good guy – I had the chance to work pretty closely with him throughout the weekend. It’s good to know he’s as excited about the team and wants to work with me as much as I want to work with him, to try and … make the learning very small, get up to the front as quick as we can and really help the team.

“I’ve known Dave a few years now and he’s just a true racer. He doesn’t really get involved much with the politics side of things, he just wants to race cars and just wants to win like I do.”

Russell is one of three drivers expected to step up from the Dunlop Series this year, with Chris Pither confirmed at Super Black Racing and yet to be announced Cameron Waters expected to slot in at Prodrive Racing.

“I’m no spring chicken in V8 Supercars, I think a lot of people forget that I’ve been doing this for a long time. It’s my opportunity, we’re going to run with it and I’ll try and do as best as I can,” he said.

With six years experience in the second tier development category, Russell has raced again many of the current Supercars up-and-comers and around the daunting Clipsal 500 street circuit several times.

“I do look at their performances, but in saying that, they’ve got their own programs and so do we, so I’ve just got to take it as it comes and do the best I can on track.”