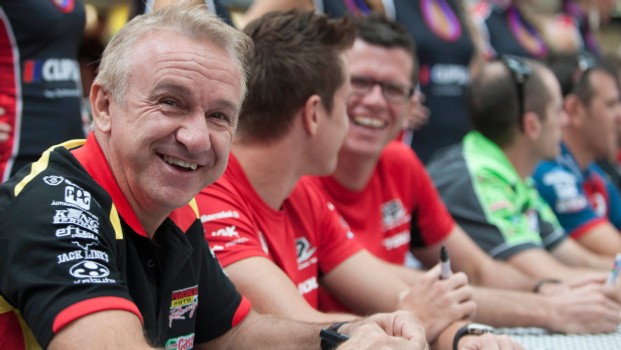 Both drivers have recorded similar achievements throughout their distinguished careers, including a championship each and two Bathurst wins.

Bowe retired from V8s at the end of 2007 but Ingall says he has fond memories of the times they spent on track together.

"John Bowe is a hero of mine, he's one of my favourite drivers," Ingall said.

"He's a legend of the sport and very underrated, but those who raced against him know just how good he was. To be considered in his company is fantastic."

Hidden Valley holds fond memories for Ingall, who won the inaugural round there in 1998, following up with more race wins in '99, '01 and '04.

"Hidden Valley is one of my favourite tracks," Ingall said.

"The reason I enjoy it so much is because there's very unique surroundings compared to the other tracks we visit. The atmosphere is just so friendly and there's always a positive vibe amongst the crowd. The weather is nice as well."

Ingall had his first independent test of the year at Winton last week and believed the SCAR team uncovered some speed from his Holden VF Commodore.

"We ironed out some problems, and as a team we uncovered some things that should translate to improved speed, but Hidden Valley is very different to Winton so we won't have a proper read on the car until we wheel it out for practice."

The SKYCITY Triple Crown sees the 60/60 Super Sprint format used for Saturday's Race 17, while Races 18 and 19 on Sunday will each be held over 100km.

For the first time in 2013, this event will feature a mixture of tyres, with drivers allocated three sets of Dunlop hard compound control tyres and two sets of softs.

Russell Ingall  ›
2013 SKYCITY Triple Crown  ›
Stay In The Know
Sign up to the Virgin Australia Supercars Championship Newsletter
We use cookies to ensure that we give you the best experience on our website. If you continue to use this site we will assume that you are happy with it.Ok