Roland Dane: ‘Why we signed Gizzy’ 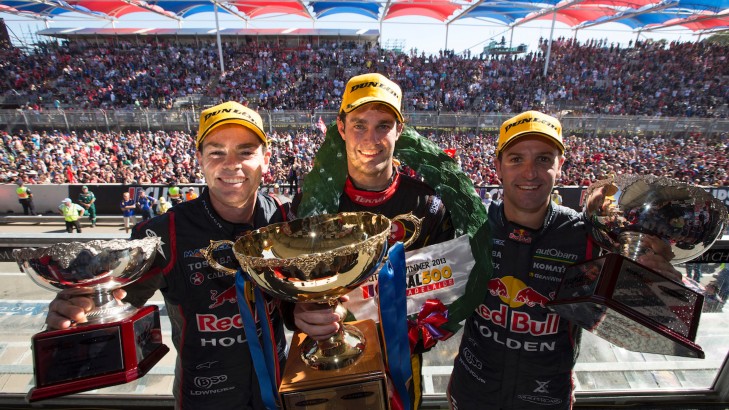 Triple Eight Race Engineering's announcement this morning that it has signed Shane van Gisbergen on a three-year deal, locked in Craig Lowndes for a further two year and retained naming rights sponsor Red Bull out until at least the end of the 2017 season resolves a whole bunch of issues circulating in the V8 Supercars Championship.

But these moves also raise many more questions, many of which v8supercars.com.au raised with T8 owner Roland Dane today.

Having already locked down six-time champ Jamie Whincup out to the end of the 2018 season, Dane explains the motivation behind signing van Gisbergen, retaining Lowndes, expanding to three cars and some of the background - not all of it mind - of just how he expects the new structure to work.

V8supercars.com.au: You've considered an expansion beyond two cars in the past, but always rejected it. Why now?

"Obviously this is a unique set of circumstance with drivers and also Gen2 on the horizon, plus our competition having gone that way and stayed that way and wanting to make sure we have as much resource as we can afford around the sequence of changes in the championship.

"Plus I suppose the final bit of it is having enjoyed a very good technical arrangement with Tekno over the last few years and especially over the last 18 months since Steve Hallam has been there has really given us someone very good to align with - should they so choose to do so."

You talk about unique circumstances with drivers. What do you mean?

"It's not often you get the opportunity to employ three of the absolute best drivers in the category, including one driver who has been with us longer than anyone and we would like to continue that relationship, while we also build for the future. So it is a unique set of circumstances in terms of availability and Craig wants to carry on with us and we want to carry on with Craig.

"At the same time we want to make sure we have a long term policy of going for the next generation. So we wouldn't have done it if Jamie, Gizzy and Craig weren't all available and happy to drive for Triple Eight."

Congratulations on the extension of your Red Bull sponsorship also. Will all three cars be in Red Bull colours?

"In due course you will see how all that manifests itself, so we are not commenting on that at the moment. You will see what rolls out next year."

Is it true that Red Bull wanted Shane?

"We all wanted Shane. Total alignment."

And have you secured the Racing Entitlements Contract (REC) that will underpin the third entry?

"That's for me to know and you to speculate on."

"It will certainly need a few more people. We actually cut down on people about 18 months ago after our hump of Car of the Future introduction. We scaled back a little bit and we weren't running a development series car last year or this year. So this is probably an opportunity to get back up to the staffing level we were at in 2011, '12 and '13, where we have been before. It also gives us the possibility of strengthening the overall business by hopefully having some more good people, including bolstering the engineering staff as well. That is never a bad thing."

And there is room to run a third car out of your current Brisbane base?

"We have run DVS out of here, we won't run DVS next year that is for sure. In doing what we are doing we have made a conscious decision not to run the developments series. Hopefully other people will using our equipment, but we won't."

So why go to three cars and not four, that way you could control the boom of the second garage?

"Because I think bite size chunks. In an ideal world - and this is up to Tekno not me - if we could work closely with Tekno as we have in the past that would make it very easy to effectively work together at the circuit. And as I say it's up to Steve and Jonno (Webb - team owner) to decide what they do, but on the basis there is every chance that Penske (with whom Tekno currently shares a boom: Ed) goes to two cars next year that would make us natural bedfellows in pitlane."

And what chance of Scott Pye driving for Tekno next year?

"I honestly don't know, that's for them. But I think his best chance is probably where he is (DJR Team Penske), but again that is up to them."

How will the engineering co-operation work across the three cars? Will it be two-plus-one, or all three in together?

"Our plan is to be integrated with it all."

Can you explain further the advantages three drivers provide in terms of Gen2? Is that a reference to more quickly solving engineering issues?

"No, I think the development as far as on-track stuff will be what it will be. What it will give us in hopefully embracing Gen2 ... is more economies of scale. In adapting the current cars, building new cars and whatever it takes as and when it becomes relevant. So from an off-track perspective I think there will be some good economies of scale to embrace."

"His loyalty to us and our loyalty to him - it's a two-way street. I don't want him to go anywhere else, I would like him if possible to spend the rest of his time with us and if we can engineer the situation in such a way that he can then that is what I want to do and that is what we have endeavoured to do.

"I hope not. I have to say both Jonathon and Steve Hallam - I am sure they would prefer to keep Shane - have both been total gentlemen over it and they understand fully even if they are disappointed. They understand completely Shane has made that move, they understand why and they couldn't have behaved better and I was very pleased and honoured that Jonno wanted to put a quote in our press release."

Shane is not the most PR-attuned driver and he likes to drive in multiple categories. Are you comfortable with that?

"I am very comfortable with that. There are clearly boundaries; he won't be driving a car with a different energy drink brand on it. But I am very comfortable because he is very comfortable driving other cars ... I am happy to have him doing that as and when it fits into the schedule and makes commercial sense. I am very happy, I like his approach and in many ways he is like a 15-year younger version of Craig Lowndes."

What will Jamie Whincup make of all this. You couldn't say it will add motivation - he's not lacking for that now.

"If you had to ask me who the two fastest drivers in the category are right now I'd have to say Shane van Gisbergen and Jamie Whincup. And Jamie has proved himself time and time again to have the speed etcetera and he is not scared of anyone and quite rightly so. By the same token Gizzy has also shown huge speed, but also started to show some real maturity under the guidance of Steve Hallam in the last 18 months particularly. I firmly believe those two guys are the fastest two guys in V8 Supercars and that's why I want them in this team."

So when did you start working on this deal?

"I couldn't possibly tell you."

You could, but you won't. Thanks for your time Roland.