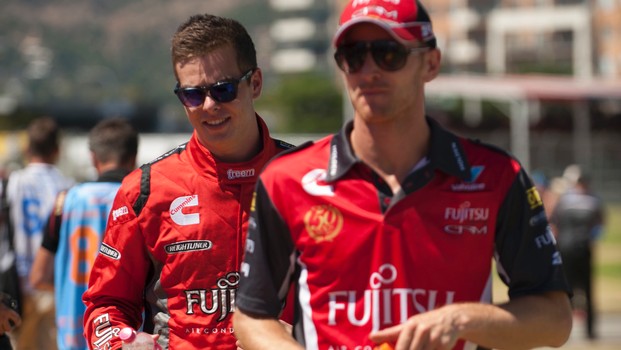 “The current drivers will stay… until they don’t perform.”

That’s the official edict from Garry Rogers when it comes tothe lineup of drivers for the 2014 factory Volvo V8 Supercars teamas announced in Brisbane yesterady.

Such an ambivalent statement is nothing less than you wouldexpect from Rogers, whose decisions and drivers and the deals he does with themhave often – and intentionally – been shrouded in mystery during the course ofhis 50 years in motor racing.

What seems to be expected at this early stage is that ScottMcLaughlin, the 20-year old New Zealander, who has already won twice in 2013and been ranked by some seasoned observers as the best rookie to come into the Championship since Craig Lowndes in the early 1990s, will continue on with theteam.

But it’s the future for Premat, the fast but inconsistentFrenchman (click here to see season progress) who Rogers debated whether to retain beyond hisdebut season in 2012, was retained on a short term deal.

“I will see what the options are at the end of the year,”Rogers told v8supercars.com.au at the announcement.

Earlier, during the press conference announcing VolvoPolestar Racing, Rogers had said: “At this stage we won’t be changing anythingon our team. We will be working closely with Polestar on developing our carsbecause they have some good people and certainly a lot of experience in theworld of motor racing.

“But our team as it is known now won’t change, we will keepthe same drivers. But I think people have seen how we do our business – youeither perform or go somewhere else.

“Or somewhere will pay you more and you will go somewhereelse.”

The two highest profiles V8 Supercars drivers on the out ofcontract in 2013 are the Holden Racing Team’s James Courtney and FordPerformance Racing’s Will Davison.

Rogers would be unwilling to meet the sort of salary demands these two superstars would require, butVolvo might be keen on a big name and commit the dollars needed to secure asignature.

ButRogers made it clear that the call on drivers would remain his sole decisiondespite the substantial investment made by Volvo and the technical supportprovided by Polestar.

“Volvo won’t determine whodrives the cars, we have already had that discussion. But clearly we will beinterested in hearing their opinion.”

Rogers also played down a report on the automotive websitemotoring.com.au that one of technical partner Polestar Racing’scontracted drivers – either Robert Dahlgren or Fredrik Ekblom – were a chanceto race for the team in 2014.

However, Rogers did confirm that his long-term sponsorsFujitsu and Valvoline had re-committed to GRM in its new guise as a Volvofactory team.