After a collision with the barrier spoiled a top result for Repair Management Australia Racing at the Bathurst 1000, the team has raced to find a new chassis ahead of next week's Castrol Edge Gold Coast 600.

With the Bathurst and Gold Coast rounds almost back-to-back, Team Principal Lucas Dumbrell was forced to seek a replacement for their damaged wreck.

Suspension failure in the final stage of Sunday's race saw Tim Blanchard spear into the concrete-wall at the Cutting, ending the team's race; the failure caused by a previous hit when Ingall collided with Holdsworth at the troublesome turn two.

"We have deemed the damage sustained in Sundays race too extensive to fix prior to the Gold Coast and have had to source another chassis," Dumbrell said.

"It is a massive financial investment to have another car sitting here and not one that we can afford so we are very fortunate that we are able to utilize Dragon Motor Racing's."

Dumbrell has made the switch from a 888-built chassis to obtain chassis GRM VF15 that Garry Rogers Motorsport campaigned in 2013 as the Fujitsu Racing Commodore driven by Alex Premat.

"It will need to be stickered, we will also fit our own engine and its associated components; it is almost ready to go."

Given the sometimes hectic scheduling throughout the V8 Supercars season, it is lucky there was a spare chassis readily available.

"It plays back to the calendar; there is a short turn around time between some of the events which means you really do need a spare car or chassis on hand for these unfortunate times when you have damage that is too extensive to repair in a short time frame.

"We were a prime example of this last year when we weren't able to run one car at Pukekohe because of the damage sustained in Tasmania, and it's happened to us again."

A massive accident marred Scott Pye's race at Symmons Plains last year, LDM unable to repair the chassis for New Zealand the following week and forced to miss the round.

Dumbrell says there is no reason why the new car shouldn't perform well at the next event.

"Looking at the performance of the GRM cars last year, I have no doubt that we have a car that is capable of running up the front.

"We wouldn't be racing next weekend without the help of Tony Klein, Dragon Motor Racing and Garry Rogers Motorsport, I really can't thank them enough.

Dragon Motor Racing was one of the few teams with a built-up spare chassis and in a position to help.

"It's fantastic, although we are competitors on the track, another team is willing to offer their support, ensuring we are on the grid for the Gold Coast race.

"The crew (LDM) have been working hard to get the car ready and although they will put in some big hours over the weekend, the mood is quite upbeat with everyone looking forward to going racing."

The Castrol Edge Gold Coast 600 then kicks off on the Friday, running October 24-26.

Dumbrell hopes to have his chassis repaired before round 13 of the Championship at Phillip Island. 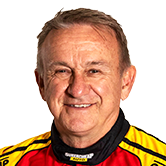