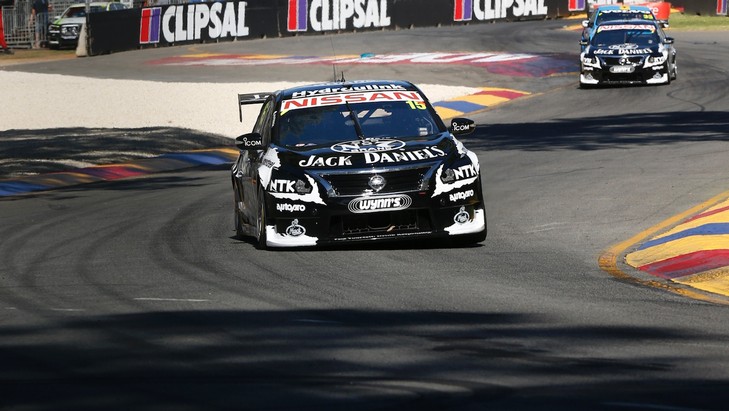 The Jack Daniel’s Nissan team is in a race against time to ensure Rick Kelly makes it to his fourth place grid position for this afternoon’s 250km race at the Clipsal 500 Adelaide.

The team is making a precautionary engine change after noting issues on the telemetry during Kelly’s ARMOR ALL Top 10 Shootout lap, which resulted in his best starting position since the Altima V8 Supercars campaign began at this race meeting 12 months ago.

The engine change for Rick Kelly follows on from one performed yesterday on brother Todd’s Jack Daniel’s Altima.

Team crew chief Scott Sinclair said the issues encountered by the two engines were different and neither related to the cylinder head cracking that were suffered late in the 2013 season.

“There is no trend there,” he told v8supercars.com.au. “There are four race engines all the same, four spare engine all the same, so no trend at all there.”

The Norton Hornets Altimas driven by James Moffat and Michael Caruso haven’t suffered any engine dramas at this meeting.

“We are changing it rather than risking it for 250km,” said Sinclair. “It didn’t slow him down in the shootout, he did a good job.”

Kelly had shown strong pace in Friday practice but was caught out by changing conditions in qualifying. However, he fought back for sixth place in the first 125km race yesterday and 11th second time out.

“We are slowly working through the set-up but probably missed the track condition a little on Friday,” Sinclair admitted. “He raced well yesterday, gained around 14 spots over the two races yesterday and will start back where we think he should be starting today."