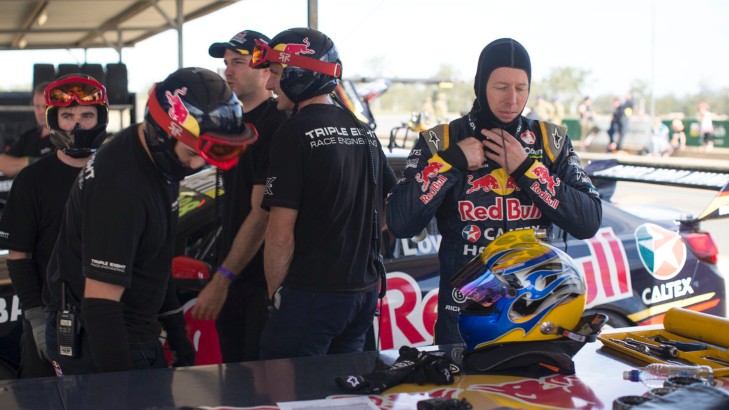 Steven Richards is surely now the most prepared co-driver in the field.

He may be new to Red Bull for 2014, but after 120 laps around Queensland Raceway in the #888 Holden Commodore VF, the highly-rated and defending 2013 Bathurst Champion Pirtek Enduro Cup co-driver has settled in, filling the seat of an absent Craig Lowndes at yesterday's team test.

Click here for the Queensland test report, and here for info on the teams that ran at Winton in Victoria.

Despite having been involved in V8 Supercars racing for years, 'Richo' had not worked with many from the Red Bull crew previously, so part of his induction this year means getting to know the guys.

Yesterday he worked closely with car 888 race engineer Jeromy Moore, providing feedback as the team looked to improve its Dunlop soft tyre deficiency, and Moore was happy with the progress and dialogue between the two.

"It was a little bit different, but not night and day to Craig," Moore told v8supercars.com.au after yesterday's test.

"They demand similar characteristics of the car, so it's not a huge difference.

"He's got really good feedback, he's consistent - always brakes in the same spot, turns in exactly the same point, so good to work with as a test driver, not only as a guy you want to do quick laps at the race weekend.

"It was really good working with Richo, he was real easy to get along with like Craig. He wasn't struggling with fitness at all - admittedly it wasn't too hot, a pretty good day for testing - but he just did long runs and never got flustered."

'JJ' agreed Richards would be one of the most prepared co-drivers in the field, particularly for the final round of the Pirtek Enduro Cup, the Gold Coast 600, the only one of the three events the V8 Supercars race on soft tyres.

"Because predominantly the co-drivers' efforts are on hards, at Sandown and Bathurst - the big one. But the good thing is, Gold Coast is on full softs, so he should hopefully have a bit of a head start on everyone else from that aspect as well."

Paired with Mark Winterbottom at Pepsi Max Crew, Richards' lowest finish in the Pirtek Enduro Cup last year came at the Gold Coast event, the pair recording 18th on the Sunday after an issue with the left rear suspension.

And speaking of mechanical issues - the engine that caused Lowndes to tumble down the order at the Castrol Townsville 500 - Driven by TAFE Queensland was back in the #888 Commodore for yesterday's test after analysis from engine supplier KRE.

"It wasn't too badly damaged - just had a cracked cylinder head," Moore said.

"It's always a bit of a weakness with these Holden engines, we're at the mercy of the standard casting and sometimes they can just develop a crack and ruin your race.

"We haven't had any of this beforehand, it's not something new we changed. It's - I wouldn't say bad luck - but one of those things. You can keep running for so long eventually a crack can develop and that knocked us over.

"But still a long way to go in the Championship and still big races to come up that we want to win. So I guess it's better having that at Townsville than having that at Bathurst, so there's a silver lining to every cloud."

Team principal Mark Dutton was impressed with Lowndes' ability to power on through the adversity, and Moore said the pair was definitely not feeling defeated about the Championship.

"Hopefully that's our bad one one done and dusted ... Frosty's been really consistent, he didn't perform very well in Townsville but still bagged some points.

"So you never know, there's still a long way to go, lots of points to go and we'll still keep trying our best to win every race as we normally do and see where we are at the end of it."

Lowndes sits sixth in the Championship, but just 10 points separate third to sixth, with Winterbottom and Jamie Whincup leading the way.

The next V8 Supercars event is at Queensland Raceway, with the Ipswich 400 running from August 1-3.