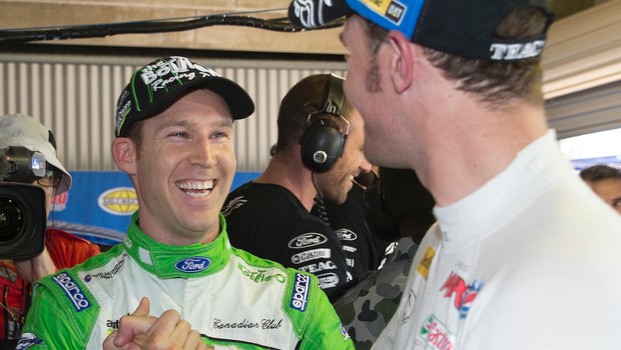 There were plenty of unfortunate results intoday’s 60/60 Super Sprint race at the SKYCITY Triple Crown, but it’s difficultnot to feel for David Reynolds, who drove solidly to claim ARMOR ALL PolePosition and led the first half of the race.

Reynolds was passed by eventual winnerJamie Whincup after the double file rolling restart, but it was FordPerformance Racing teammate Mark Winterbottom who dealt the final blow.

After mid-pack carnage at turn six, theSafety Car was deployed. It was that restart that started the issues forReynolds – he was slow to respond and dropped back into the clutches ofWinterbottom, who fought to take second position off his teammate.

What the Stewards deemed careless driving byWinterbottom – and resulted in a pit lane drive-through penalty – saw the #5driver lock his rear wheels and punt Reynolds off the track. Just five lapsbefore the end of the race.

So instead of the podium position he lookedset for, Reynolds ended the day 14th.

“Before the restart I was supposed to getthe call ‘Safety Car in pit lane’ and then we can go,” Reynolds said after Race17 of the Championship.

“But I had no call… I didn’t hear the callcome in, so that’s why he gapped me.”

Post-race points penalties were handed downafter the last event in Austin when the top three cars accelerated under SafetyCar, so Reynolds played it safe and waited for the word.

It was that slow restart that allowedWhincup to gap the pole sitter, who was left behind to battle withWinterbottom.

“Mark was obviously quite fast but he justcouldn’t get past me for some reason,” Reynolds said.

“We were side by side giving each other alot of room and respect, and then obviously it all boiled over at turn six.

“We’ll sort it out internally and go racingtomorrow.”

The car’s fine despite the contact, andReynolds added it was the fastest it had been all year.

“I’m still happy, I’m just a bitdisappointed for the team that we didn’t get the actual result we deserved.”

Reynolds didn’t feel the 60/60 rollingrestart was the issue – more the safety car restart.

“We used to have no drama – when youget to the last corner you go, and you go off the leader. And so what if there’sa bit of overlap with the safety car – who cares, it’s been happening for 20years.”

Winterbottom was, of course, also disappointed with the day.

"We were on for a good result but obviously the contact with Dave and the penalty meant we missed out on the podium," he said.

"Contact is never what you want in motorsport, especially not with your teammate. We’ve had a chat and cleared the air and I am just sorry for the team as they work hard to get the big results."

Each race is 100km – 35 laps– and requires teams to run both hard and sot compound Dunlop tyres on thecars.

David Reynolds  ›
15' The Bottle-O FPR Ford ›
15' Pepsi Max Crew ›
2013 SKYCITY Triple Crown  ›
Stay In The Know
Sign up to the Virgin Australia Supercars Championship Newsletter
We use cookies to ensure that we give you the best experience on our website. If you continue to use this site we will assume that you are happy with it.Ok