David Reynolds has beaten Scott McLaughlin to ARMOR ALL Pole Position for the opening leg of the CrownBet Darwin Triple Crown, his first for Erebus Motorsport.

Reynolds set the pace early in the 15-minute session to take his eighth career pole, while rookie team-mate Anton De Pasquale grabbed third on the grid.

It is the first time since the Saturday Gold Coast 600 race last October that something other than a DJR Team Penske Falcon or Triple Eight Commodore took pole.

On that occasion it was a Tickford Falcon in Chaz Mostert’s hands, while Reynolds’ preceding pole came with that team at Pukekohe in November 2015.

Erebus’ last pole came with Will Davison in a Mercedes at Homebush in the 2014 season finale.

The full field headed out on green tyres, with McLaughlin – second on the road to team-mate Fabian Coulthard – turning a 1:05.8943s.

That was the first sub-1:06s lap of the weekend, but it was only the benchmark for a matter of seconds.

McLaughlin gave up on his second flier early in the lap, and was taking his gloves and helmet off with six minutes to go.

Reynolds stayed in his Penrite Commodore for several more minutes, but ultimately opted against running again.

Improvements were hard to come by anywhere in the field, with Reynolds finishing on top by 0.0447 seconds.

“We know when the Porsche rubber is down you have one lap to do it and it’s kind of toast after that,” Reynolds said.

“I threw everything I had at it and it stuck. The car was pretty good, thanks to all the boys, they put in the hard work last night to change the set-up a bit.

“Even Anton is P3, which is a phenomenal job for him. As a team, we’re super wrap.

“It means a lot to me… I was actually crying a little bit in the car after that, because we haven’t had a pole position with this team yet. It’s been unbelievable.”

McLaughlin had to settle for second in his Shell Ford, his eighth front-row start of the campaign.

“You always want to see a full qualifying session,” he said.

“Great job by Dave, and Anton especially, one lap out of the box is always very hard and they absolutely killed it then.

“I just missed a little bit on my lap, probably just being a bit too safe trying to get that first lap in, and paid the price.

“[On the second lap] I basically knew through 1, the track had changed completely grip wise. It’s unbelievable how it all happens and how our cars react to that rubber.

“It’s probably something we need to think about in the future, but it’s the same for everyone.” 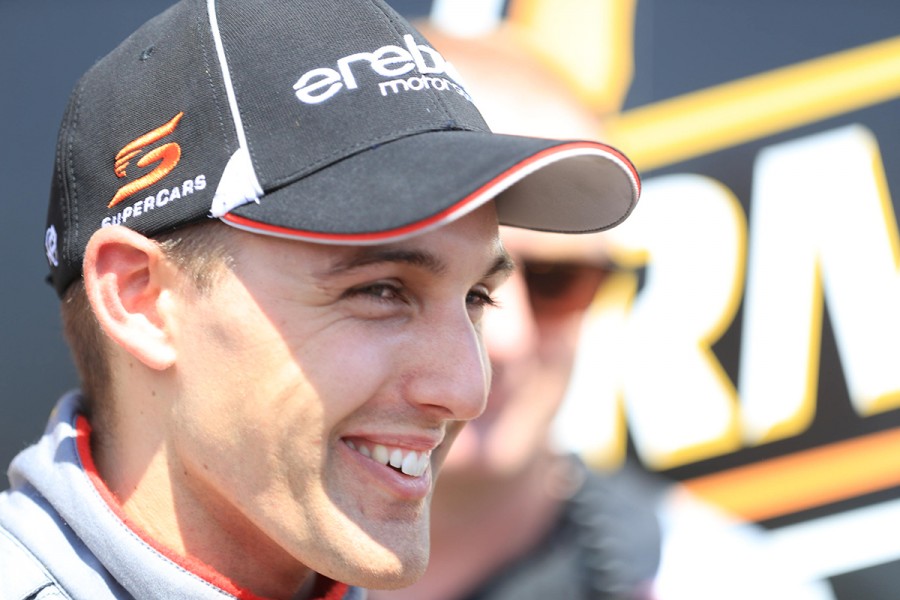 The 22-year-old’s previous best in Supercars was eighth, recorded on both days at Phillip Island.

“It’s my best qualifying but Dave still beat me!” he said.

“But it’s really good for the whole team, we’ll see what we can do in the race.

“We’re in the best position to race really well.”

Kelly, van Gisbergen and Whincup remained fourth, fifth and sixth, while Andre Heimgartner made it a pair of Nissans in the top seven.

"I made a mistake at 1 and up at the hairpin, but the car is much better,” Whincup said.

“I could have done a much better job with the car I had.”

Scott Pye, Michael Caruso and an injured Will Davison rounded out the top 10, ahead of Tim Slade, Craig Lowndes and Garth Tander.

Mark Winterbottom was Tickford’s best runner in 16th, just ahead of Mostert and Cameron Waters, with Richie Stanaway 22nd.

Coulthard and Courtney improved marginally after their first runs and will start 14th and 23rd, while wildcard Macauley Jones was 25th in his repaired Commodore.