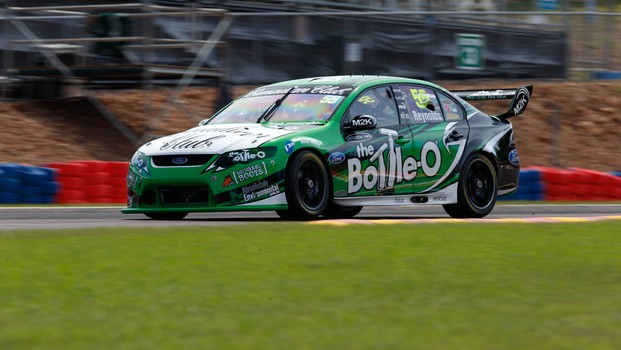 The Bottle-O Racing's David Reynolds has recorded the fastest time in this afternoon's ARMOR ALL Top 10 Shootout, placing him on pole position for Race 17 of the Championship, at the SKYCITY Triple Crown.

It was a nervous wait for Reynolds who recorded the 1min09.5035 as the fourth car out in the shootout, but for the second time is his career he will start from first position this afternoon for the 60/60 Super Sprint race at Hidden Valley Raceway.

Rick Kelly was first out, the only Nissan in the top 10, and recorded a lap good enough for seventh. Garth Tander was out third and ran very wide exiting turn one in the first sector; Reynolds' FPR stablemate Will Davison recorded a lap just five hundredths of a second slower, and Whincup – second last out – was just one-hundredth of a second slower with a 1min09.5172.

But Reynolds managed to hold on and claim the seventh straight pole position for Ford at Hidden Valley – and the sixth out of the last seven for FPR.

Craig Lowndes, who was fastest in Qualifying, ended the session tenth.

Cars will only run hard tyres during the race this afternoon, which begins at 3.10pm local time (3.40pm EST). It will be 42 laps divided into two halves with a double file rolling restart after the 15-minute half time break.

David Reynolds  ›
15' The Bottle-O FPR Ford ›
2013 SKYCITY Triple Crown  ›
Stay In The Know
Sign up to the Virgin Australia Supercars Championship Newsletter
This website uses cookies to improve your user experience. By continuing, you will be providing your consent to our use of cookies.Ok